Maua, Samoa’s central e-commerce mobile platform, is now fully kitted out to enable both Digicel and Bluesky users to spend with their mobile wallets.

The app launched last August has nearly 300 active vendors using it to promote and sell their products conveniently to around 1000 registered users.

It was developed by local information technology firm Sky Eye to bring the benefits of e-commerce – buying and selling online – to the people of Samoa.

Chief Executive Officer, Fa'aso'otauloa Sam Saili, said because e-commerce was built in developed countries, it didn’t have the needs of developing countries in mind, and requires online banking, debit and credit cards to be effective.

“E-commerce has been around for ages, and has never really benefited Samoa because of the infrastructure,” he said.

“It was created for people with credit cards and online banking but the people we have been trying to work with don’t have bank accounts.

“That is why the mobile wallet is the focus for financial inclusion – there are very little hurdles to adding a wallet to a mobile phone.” 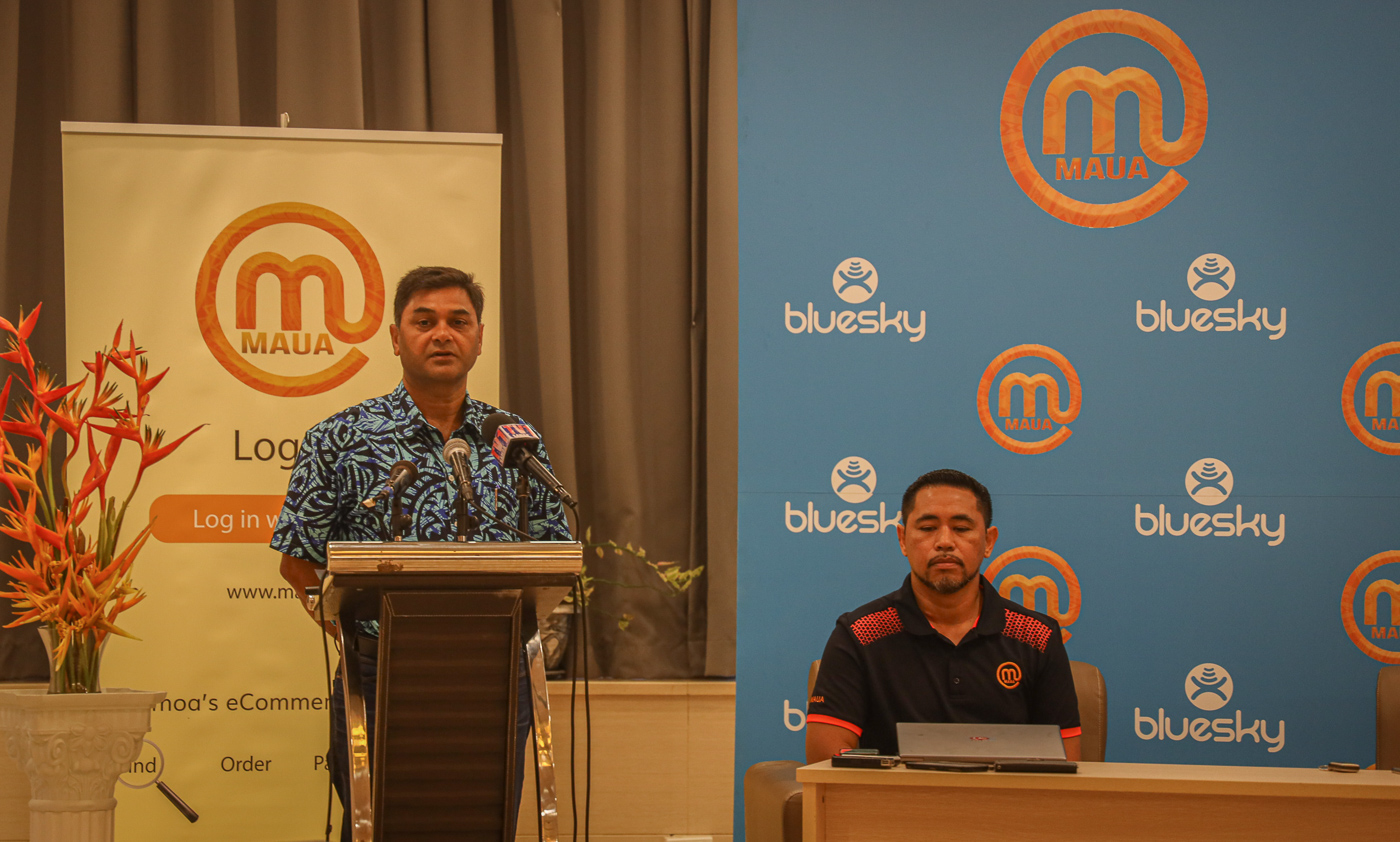 In Samoa, 39 per cent of the population have a bank account while 78 per cent have a phone and the capability to use mobile money, according to Central Bank of Samoa research.

“The human being always wants convenience – all innovations worldwide are about convenience,” he said.

“This is going to be a game changer in the economy and the convenience of the entire Samoan population. It will increase everybody’s business, not only Maua App or M-Tala but business for everyone associated with the app.

“[SkyEye] is not only a business but a big service to the people of Samoa by creating this convenience.”

Fa’aso’otauloa said it was months of work to connect the Maua platform to M-Tala, but will immediately pay off with some vendors – Bluesky customers – waiting to register with the app until the Bluesky mobile money system was live.

M-Tala launched in February last year. By the end of 2019, 15 per cent of BlueSky customers were using the system, which is now connected with the Samoa Water Authority and Electrical Power Corporation allowing customers to pay their water and power bills using their phone.

Fa’aso’otauloa said he knows getting more people using the e-commerce and mobile money platforms will be slow going, because Samoa is still very much a cash-based economy.

“It’s a learning curve for consumers to move into converting their cash to electronic cash. Those that have Maua are repeat customers because they see the convenience, but a lot of people – especially our target vendors – if they get cash into their bank account they immediately take it out.

“It’s an education thing we need to continue to push.” 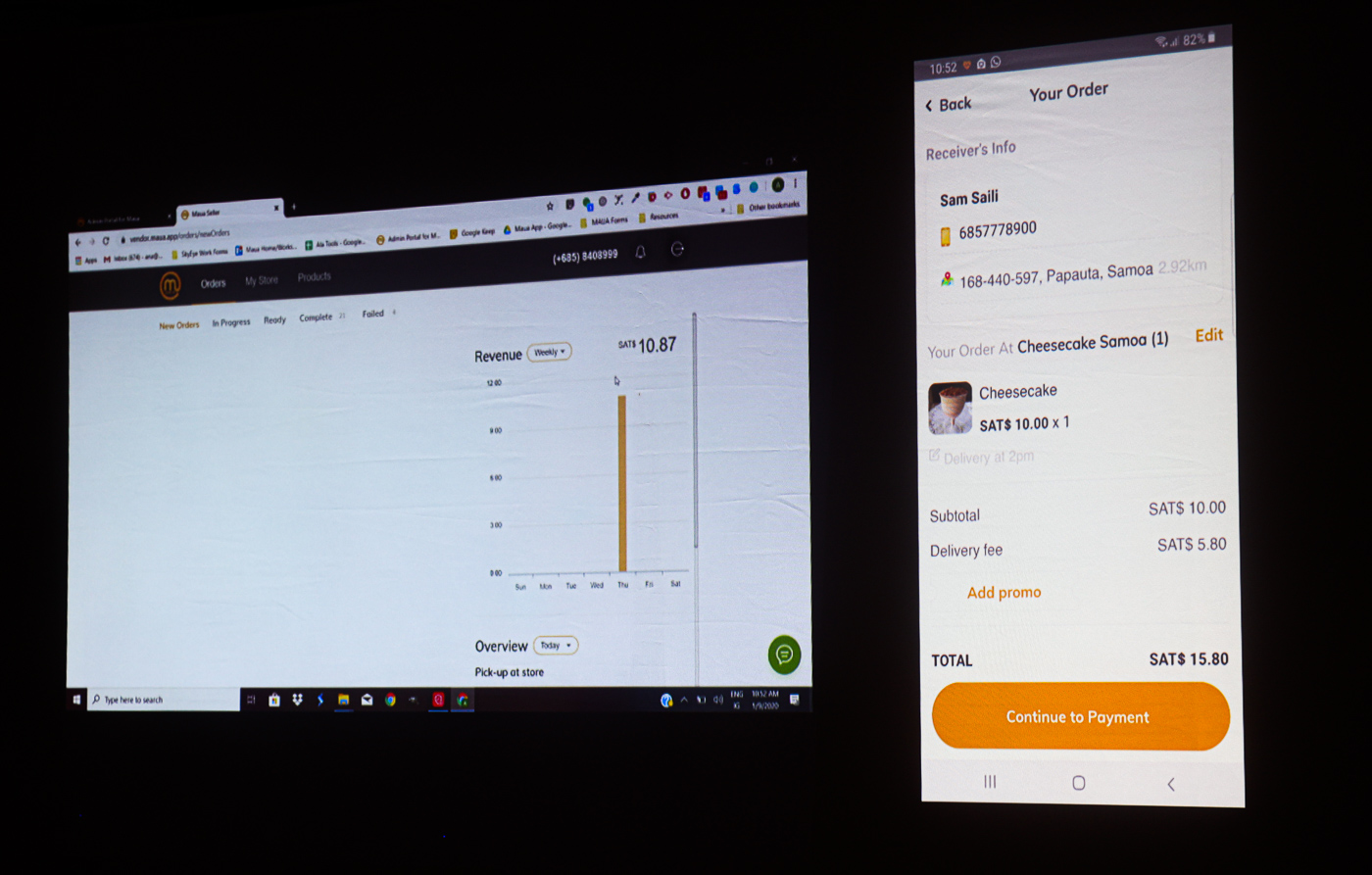 But now that both mobile operators are on board, 100 per cent of all Samoan phone owners can comfortably use the app, so he hopes to see a spike in users soon.

Sky Eye is also working on its own payment gateway to enable credit card and online banking payment options to integrate into Maua.

The platform will launch a new taxi hailing feature shortly, allowing users to order a ride directly to their doorstep and to pay over the phone with the cashless mobile money system.

“We want to make Maua the default for goods and services,” Fa’aso’otauloa said, to encourage more people to spend digitally instead of with cash.

“You have to make more of a thought process before you spend, unlike cash where it’s very easy to spend and not thinking about what you’re spending it on,” he said.

“It’s why there is a big push, especially in third-world countries, for the unbanked to be banked because of all the benefits that come with it.

“For example, transaction records, so they can understand and go back and look at where their funds went, they can plan ahead and budget. When you have cash it’s hard to keep a record but when it’s electronic it’s all logged and you have access to that.

“Our vendors too, they have already started saving with their mobile wallet. The money goes into a different account and they are leaving it there until they need it.”

In 2015 the Central Bank of Samoa published a Financial Services Demand Side Survey, which revealed people with bank accounts reported saving on average 2,000 per cent more than those without.

Nearly a third of people – who told the C.B.S survey that they would prefer to save through a bank account – had never actually opened one, showing a demand for financial services that are secure, and would help them save money.