The near-threatened Samoan fruit bat which is endemic to Samoa, American Samoa and Fiji will be commemorated onto an American coin to raise awareness on the mammal’s threatened status in American Samoa.

The celebration of the fruit bat, which is native to American Samoa’s National Park, will mark only the second time the neighbouring U.S. territory is featured on the American currency.

According to the U.S. Mint, which is a unit of America’s Treasury Department, the National Park of American Samoa quarter will have a design that depicts a Samoan fruit bat mother hanging in a tree with her pup.

“The image evokes the remarkable care and energy that this species puts into their offspring. The design is intended to promote awareness to the species’ threatened status due to habitat loss and commercial hunting. The National Park of American Samoa is the only park in the United States that is home to the Samoan fruit bat,” stated U.S. Mint.

The reverse inscriptions were designed by Richard Masters, and sculpted by Phebe Hemphill.

The Treasury Department releases five new designs every year and is authorized by the America’s Beautiful National Parks Quarter Dollar Coin Act of 2008. 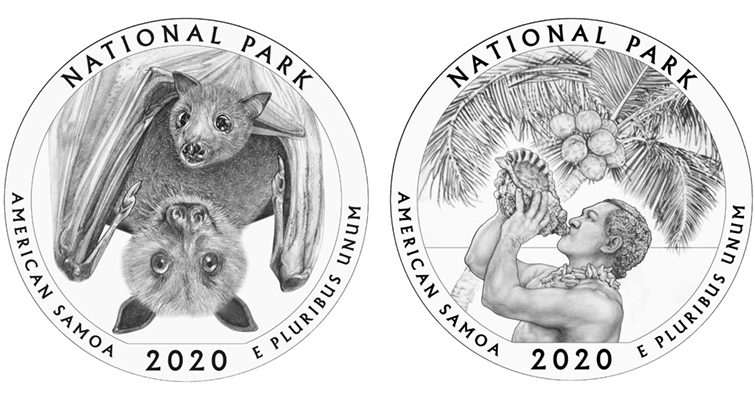 Final designs were picked by the Citizens Coinage Advisory Committee and the Commission on Fine Art in Washington D.C.

This is not the first time American Samoa has featured on U.S. currency, in 2009 American Samoa was honored on a 50 State quarter alongside designs of Washington D.C. and other U.S. territories.

That quarter featured the “Heart of Polynesia” design that depicted an ava bowl, whisk and staff, coconut trees, and an inscription of American Samoa’s motto “Samoa Muamua Le Atua” which translates “Samoa God is first.”

Last year, in commemoration of the 2019 XVI Pacific Games, Samoa released a new polymer $10 tala bank note, which celebrated the youth of Samoa and the country’s sporting legacy.

The U.S. Mint will strike circulation pieces of the America the Beautiful American Samoa issue at the Philadelphia and Denver facilities and Proofs at San Francisco from February 3, 2020.