In May 2017 the Kingdom of Tonga dropped a bombshell when it announced it was pulling out as the host of the 2019 Pacific Games, due to the high costs of the sporting infrastructure needed to host the regional sporting event.

The announcement by the then Tongan Prime Minister, late Akilisi Pohiva threw a spanner in the works of the Pacific Games Council, forcing it back to the drawing board to call for expressions of interest from its members in the region.

The support of Prime Minister Tuilaepa Dr. Sa'ilele Malielegaoi and his Cabinet for the Games were also major factors, added the Pacific Games Council Chief Executive, Andrew Minogue, in an interview with Radio Australia on September 1, 2017.

Prior to announcing the success of Samoa’s bid, Prime Minister Tuilaepa wrote directly to the Pacific Games Council President, Vidya Lakhan in July 2017 expressing his Government’s interest to play host.

Mr Lakhan praised the Prime Minister for his support, saying Samoa wouldn’t have won the bid without the support of his Government. 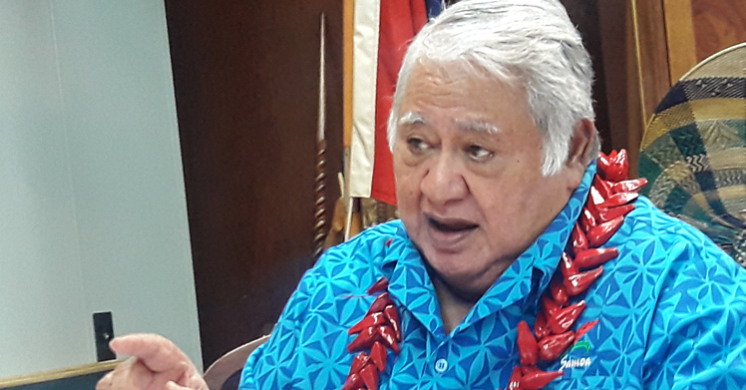 With Samoa set to host the region’s sporting showpiece and with less than two years to pull it off, the Government began to process to recruit a Chief Executive Officer who would have oversight over the country’s preparations, while liaising with the Prime Minister and the Cabinet and various stakeholders.

There was a lot at stake for this island nation of 196,000 people besides national pride. Having only 16 months to prepare to host a regional sporting event – that can attract up to 5,000-plus athletes and sporting officials and would normally take four years to pull off – the task for the new appointee was fraught with risks.

“The Cabinet and the Samoa Government has faith in Falefata and his ability to take on the vast responsibilities that comes with being the C.E.O.,” he said at that time.

“He was highly recommended by the panelists and given his vast knowledge in sports, we opted for some new blood in the Pacific Games arena.

“Falefata is young, smart, and energetic and given that we have just less than 16 months before the Pacific Games, we know he is the man for the job.”

At that time, he was not new to the sporting arena, having being the C.E.O. of the Samoa Institute of Sports (S.I.S.) for over two years, before he was elevated by Cabinet to be the C.E.O. of the newly established Pacific Games Office. 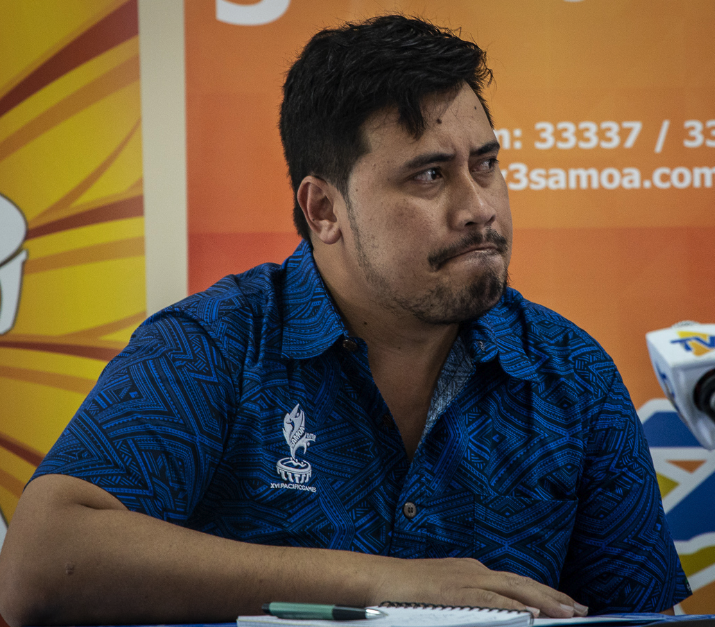 But a week after his appointment, Prime Minister Tuilaepa was forced to defend his appointment following criticism that he lacked experience to organise major events.

In an interview back then with this newspaper, he said Cabinet met three times to discuss the list of applicants before it settled on Falefata.

The only issue was that there were a lot of applicants but the panel decided to interview only three,” he said.

“That is why the Cabinet instructed the panel to interview all of the applicants. It was after that when Cabinet finalised their decision on Falefata.”

Amid the scrutiny of the process leading to his appointment, the new Pacific Games Office C.E.O. had exactly 16 months, to get the country ready to host athletes and sporting officials, who would travel to Samoa to participate in the 2019 XVI Pacific Games.

Some major boxes for Falefata to tick included: the construction of new sporting infrastructure and the renovation of current facilities funded by the Chinese government; the organising of accommodation for visiting athletes and sporting officials; securing the support of Samoa’s private sector for the Games through corporate sponsorship; negotiating and issuing broadcast rights for the live televising of the Game; and securing logistical support from donor partners to move athletes and sporting officials to and from the Games venues, as well as support for law enforcement operations.

In March this year – exactly 12 months after his appointment by the Cabinet – Chefs de Mission and representatives of 13 Pacific Island nations and territories flew into Apia and met with the C.E.O. and his team at the Pacific Games Office.

It was Falefata’s first meeting with some of the region’s sporting fraternity and the Chefs de mission and representatives were given presentations on sports services, games village operations, games operations, security, catering and accreditation, before they were taken on tours of the various facilities within and outside Apia.

Towards the end of June the Chinese government began the process of officially handing over new and refurbished sporting facilities. These included a new multipurpose sports gym at Tuanaimato and the renovated Apia Park Stadium and Aquatic Centre.

Games village accommodation was also signed that month, four weeks before the arrival of the athletes and sporting officials, with the Methodist Church handing over the keys to the Faleula Methodist Compound.

On top of this corporate sponsorship of the Games had already totaled $6.945 million, ensuring the Pacific Games Office went over 50 per cent in their target to raise adequate funding to support the July 7-20 regional sporting event.

Logistical support for the two-week event was crucial for its overall success and Samoa’s major bilateral partners did not disappoint. The Chinese Embassy handed over 48 containers of vehicles as well as sporting equipment and fireworks. The Australian High Commission backed that up and presented 10 motorcycles and two buses to the Samoa Police Service to ensure the Games were secured.

At the end of May, flanked by Falefata, Samoa Association of Sports and National Olympic Committee (S.A.S.N.O.C.) President Fepuleai Patrick Fepuleai and Mr. Minogue, Mr Lakhan announced in Apia that Samoa was ready to host the Pacific Games after 15 months of preparation.

“All the various aspects that need to be taken care of have been very ably and carefully taken care of by the C.E.O. of the Games Organising Committee and his team,” he said at that time.

“We took the opportunity to speak with some of them about some of the finer details, some of them are being addressed and of course they’ve got another four weeks to put everything in place." 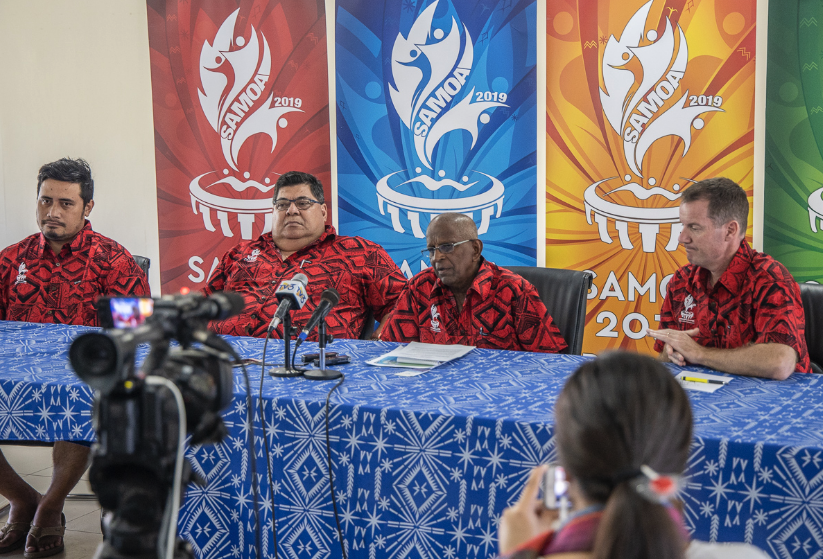 The Pacific Games Council confirmed the participation of 24 countries, 22-member associations as well as Australia and New Zealand in the 2019 XVI Pacific Games in Apia from July 7-20.

On the evening of July 7, Samoa’s Head of State, His Highness Tuimaleali’ifano Va’aletoa Sualauvi II, took the podium at the Apia Park Stadium and declared the XVI Pacific Games officially opened.

The Head of State’s announcement and the celebrations that followed involving athletes and officials from 24 countries as well as local volunteers was the culmination of 16 months of hard work by Falefata and his team at the Pacific Games Office. They were ably supported by the Games Organising Committee and Prime Minister Tuilaepa.

Over 5,000 athletes and officials registered to participate in the 2019 XVI Pacific Games, making it the largest in the history of the Games.

The Games opening ceremony was spectacular in every sense, the flag-waving athletes and officials representing the 24 Pacific nations attired in their national colours and celebrating the occasion to the cheers of thousands of local spectators.

Prime Minister Tuilaepa was in awe of the opening ceremony spectacle, praising Samoa’s “one in spirit” that enabled the host nation and its citizens to unite to welcome the thousands of visitors to its shores.

“We acknowledge this event was initially awarded to Nukualofa, Tonga,” Tuilaepa said. “Samoa took this rare opportunity to host such an auspicious event. I know the teams in all 27 sports are here in readiness for the competition.” 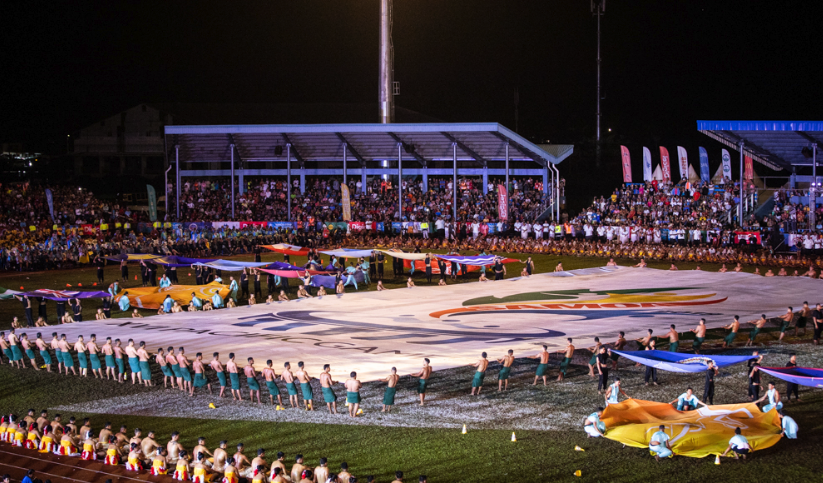 Special mention was made of the country’s bilateral partners China, Australia, New Zealand as well as regional organisations, whose “goodwill and contribution” the Prime Minister credited for Samoa successfully playing host.

As the host nation of the Games, Samoa went all out to capitalise on its home-ground advantage with its 502 athletes, and at one point in the first week of the competition were second in the medal tally.

Highlights included local boxes – dubbed the ‘magnificent seven’ by the local and international media – dominating boxing towards the end of the two-week competition to win seven gold medals.

And Samoan swimmers Lauren Sale and Brandon Schuster creating history for Samoa by becoming the first two swimmers in both men and women’s categories to win gold medals at the Pacific Games level. Due to his dominance in the pool, Mr Schuster went on to be named Oceania’s Best Male Athlete during the Association of National Olympic Committees 2019 Awards in Doha, Qatar in October this year. 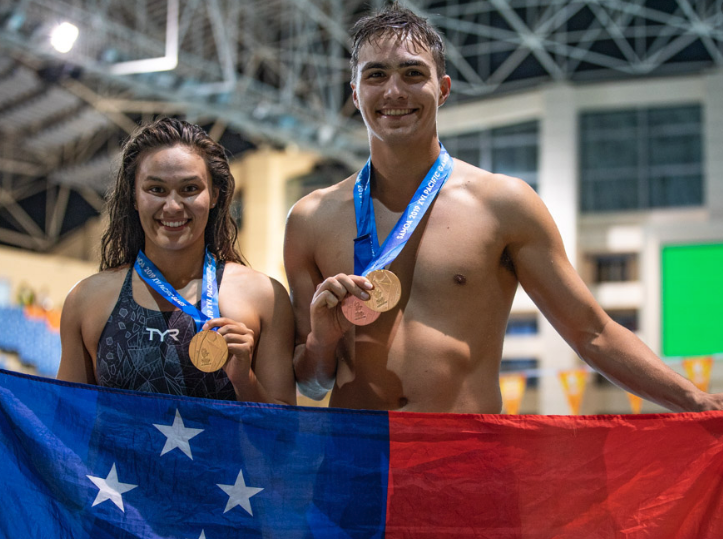 At the end of the two-week competition, Samoa settled for third place in the overall medal tally of the Games, collecting a total of 125 medals comprising 38 gold (tied with Papua New Guinea), 42 silver and 45 bronze.

For Samoa’s Chef de Mission Sass, the country’s 502 athletes exceeded expectations by collecting over 100 medals in the Games.

"We were really gunning to win these games but I think where we are at, I’m pretty satisfied and very happy and I know that a lot of our athletes are absolutely stoked with where we are at,” she said at that time.

"I think we’ve done a fantastic job and it’s been well worth all the effort and the investment, that our Government and all our people, especially the athletes, I think a lot of them are very very happy to be a part of Team Samoa.”

She paid tribute to the Games Organising Committee and Falefata, saying the 2019 XVI Pacific Games was indeed a “miracle games” for Samoa. 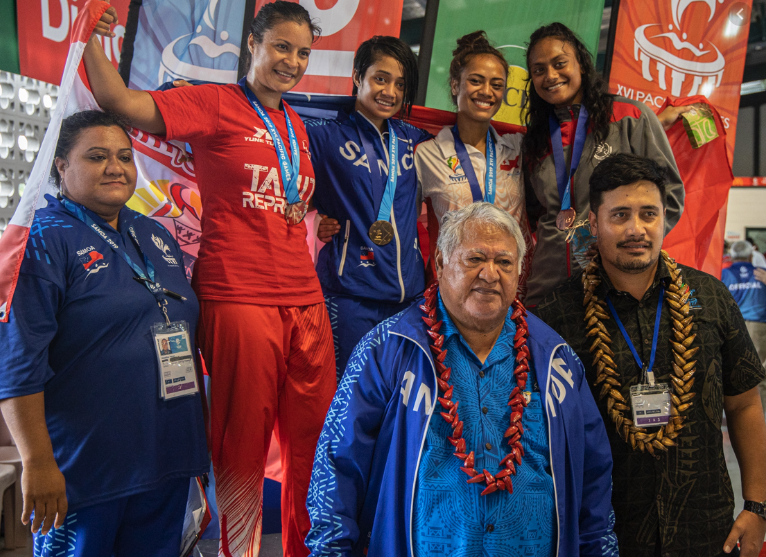 Falefata, at the completion of the Games, spoke of its legacy for Samoa as the 2019 host and its impact on sports development in the country in an interview with Radio New Zealand.

"And that is the legacy for me personally, it has been about growing young leaders in our sporting sector as well as in our public sector as well."

It is a coincidence that one of the pillars of the Samoa Institute of Sports (S.I.S.) – where Falefata made his first step as a Samoan sporting executive – is to support the advancement of the country’s future sporting stars.

His successful 17-month tenure as the C.E.O. of Pacific Games Office enabled him to kick one major goal for both the S.I.S., Pacific Games Office, and sports development in Samoa – effective management of the Games and strategic partnerships with SASNOC, the Pacific Games Council, and the Government which created an enabling environment to build a strong foundation for Samoa’s future sporting stars, based on the exemplary performance of Team Samoa in the 2019 XVI Pacific Games.

Twelve teachers from different schools across the country graduated on Thursday with certificates from the Alternatives to Violence Project (A.V.P.) workshop.