Mariota Sanele with 2-year-old Martinez and 3-year-old Mathias with their apples which are just starting to bear fruit, as they do every year. (Photo: Vaitogi Asuisui Matafeo)

A family who says they have been the first to grow red apples in Samoa might just be onto something, after their unusual claim won the backing of a leading expert in biodiversity.

For Mariota Sanele Sanele of Tiavi his belief that his family's tree is the nation's first to bear red apple fruit is actually of secondary importance. More significantly, its fruits serve as a memory of his late father, Lesa Sanele Samoa who passed away in 2013.

Apples are said to grow best where there is cold in winter, moderate summer temperatures, and medium to high humidity.

But his 28-year-old son, Sanele, said his late father planted three apple plants in 2004, from seeds he had nursed from apples he bought from a store.

“Of the three plants, only one apple tree is bearing fruit,” he said.

“We’ve been eating its fruits for a while now and it is sweeter than what you buy from the stores.”

Sanele says the apple tree only bears fruit during the Christmas holiday, which is an eerie coincidence for the Sanele family.

“It only has fruits around Christmas time, after those fruits right now, they will only bear fruit again next Christmas,” he said.

“But that’s even more reason for us to be reminded of our father because his birthday is exactly on Christmas day, 25 December.” 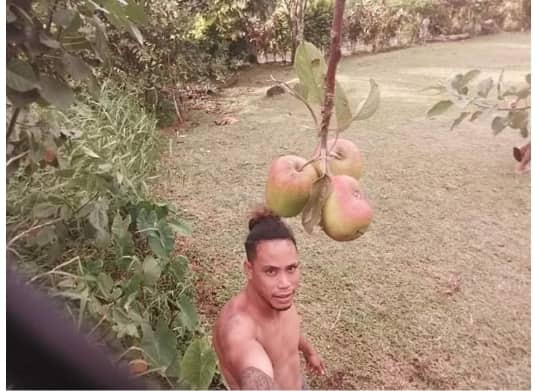 They have never attempted to sell their apples - rather they are as a snack for the family's three young children.

But the question of whether apples have ever been grown in Samoa before and, well, how to compare apples with apples is complicated by history.

Early writers in Samoa made mention of apple varieties, including Robert Louis Stevenson. Dr. Augustin Kramer’s book, The Samoa Islands Volume I and II, which was first published in at the turn of the 20th Century mentions wild spondias apples (vi vao) and Malay apples (nonu) growing in Samoa.

Other varieties of apples mentioned in the literature includes Robert Louis Stevenson's reference to mammee apples and custard apples growing in Samoa, which are included in a compendium of his writing: Marie Fraser’s book called "In Stevenson’s Samoa".

A book My trip to Samoa, dating back to 1911 by Barlett Tripp reads that Samoa has custard, and mummy apples, “but no apricots, peaches, pears, apples, plums, or other fruits of the temperate zone.”

But an international expert in biodiversity, Adjunct Professor at the University of Canberra Peter Bridgewater, who was provided with photos of the fruit by the Samoa Observer said he believed the claim.

"For my money he is on the money – it’s the first apple in Samoa – [Robert Louis Stevenson] I don’t believe was growing apples, more likely [he] meant the popular 'Tahitian apple'," he said via an e-mail interview on Monday.

"If he did get apples growing then they would likely still be there, given the number of Europeans that wrangled over Samoa."

The best apples, Dr. Bridgewater noted, typically need low temperatures (of at least below 7 degrees celsius) to survive during the winter. When presented with photos of the fruit, he told the Samoa Observer:

Dr. Bridgewater specialises in applied ecology and was formerly the Chief Scientist at the British Nature Conservancy Council and a Visiting Professor at the United Nations University in Japan.

A fruit farmer from Solosolo, who has been growing fruit for more than 20 years, told the Samoa Observer that he believes the apple grown in Tiavi may definitely be the first red apple in Samoa.

68-year-old Tupa’I Iulai said that, if the claim to have grown a new type of fruit in Samoa really is true, it would be great to plant some more and have more apples grown and sold locally.

“There has never been an apple grown in Samoa before, at least in my years as a farmer I have never heard [of] or seen [them],” he said.

“There was a time when I heard someone try to grow apples locally but was not successful, until now.”

But Dr. Bridgewater cautioned that the unique nature of Sanele's tree probably reflected how difficult apple growing was in the Samoan climate.

"I don’t see a new Samoan industry developing!," he said