People of the Year: Aniva Clarke

How does a school know if it is wasteful, or acting against the best interests of the environment? One student, 13-year-old Aniva Clarke, had her primary school audit itself.

Aniva started an environment movement for school aged-children when she was just 11 in 2018. Initially it was an environment club for students to do good work together, and has grown into a policy writing, guideline establishing organisation effectively changing the way Samoa’s kids – and adults – look at the world

“I have seen the journey of this amazing young person in primary school, from a simple idea that she single-handedly garnered support from her classmates and likeminded young people for, and created a movement,” her mentor Lagipoiva Cherelle Jackson said.

“She is an amazing young person in her own right. She is intelligent; she thinks about things, she analyses and works towards a solution.”

Her movement, Eco Toa, is now on the cusp of national expansion, with Girls Leading Our World looking to take it into rural Samoan schools.

Right now, Aniva is in the midst of developing waste audit guidelines for every school in Samoa, which she hopes to pilot across a range of schools, especially in rural villages, in the New Year.

She is also busy writing a handbook for Eco Toa leaders at school, to help them grow the movement, look for environmental challenges and figure out solutions their schoolmates can take on. On her advice, her primary school, Vaiala Beach School has planted trees of offset its carbon emissions and instigated Plastic Free Lunch Days.

Now at Apia International School for her high school years, Aniva has her sights set on composting waste that can be diverted from landfill and used to grow better flora and fauna.

In 2019, her work advocating for a cleaner environment and better practices in schools put her on the radar of Acting Chief Justice Vui Clarence Nelson, which led her all the way to the Convention on the Rights of the Child with the backing of Prime Minister Tuilaepa Dr. Sailele Malielegaoi.

In October, she and Jane Tui Toala from Savaii represented Samoa and the Pacific at a regional meeting on the rights of children to a clean environment in Bogor, Indonesia. 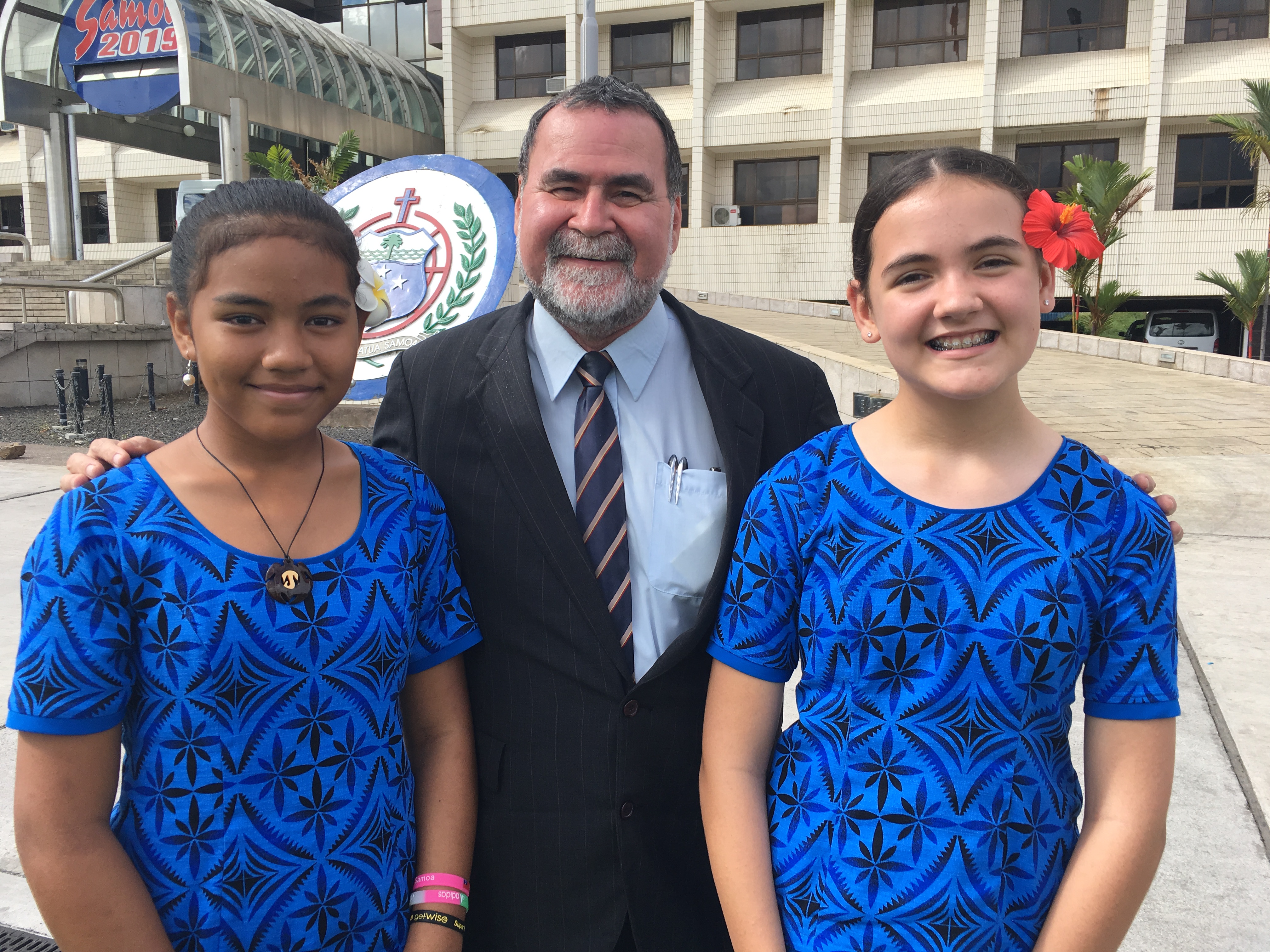 There they spoke to other children from around the Asia Pacific region, leaders and business people in relation to the environment, speaking for all children in the Pacific who are in danger of losing their homes to rising tides, pollution and food insecurity.

Aniva said the first thing she noticed was how heavily polluted the air in Indonesia is. It was a stark warning to her of how the entire world could look without any changes.

“When we got there the air was completely grey, and there is a lot of traffic jams, just showing a lot of the CO2 emissions from the cars are ending up in the atmosphere,” she said.

“I started to realise if the world doesn’t start taking action on climate change soon, Samoa and the rest of the world will end up with grey skies and pollution, which will damage our health. Some kids at the workshop had never seen a blue sky except in movies or picture books.

“Maybe one day that is how future generations in Samoa will live.”

Lagipoiva said Aniva and Jane took their work on the environment to a “whole different level” by speaking on the international stage.

“It’s one thing to do the work on the ground but they have to be able to tie it to policy and global initiative because that comes back by way of funding and policy changes,” she said.

Lagipoiva said as well as her own tenacity, Aniva had the right ingredients in her life to succeed: supportive parents and adults around her.

“Some of the key factors in the success of young people are to first of all have intelligent supportive parents who will help them and support their ideas and work through them.

“The second one is having a community of adults who actually believe in you and make things happen for you.”

Vaiala Beach School, where Aniva spent her primary school years, was instrumental in getting Eco Toa off the ground. With a “forward thinking” Principal in Lorraine Williams, and an encouraging science teacher Annie Meredith, there was no way Aniva’s ideas would remain in her head alone.

The 13-year-old has always had an avid interest in the natural world. In year seven, she placed first in her year at Vaiala Beach School’s science fair in 2017 on with her experiment into how long different kinds of plastic bags, including ‘eco-friendly’ ones,  take to decompose in different solutions.

Plastic pollution is a bugbear of hers. The constant glitter of plastic and foil packaging dumped on the roadside, often from the windows of cars and buses, is a challenge she won’t give up on. Aniva said her Plastic Free Lunch initiatives, held every Wednesday, resulted in near-empty rubbish bins.

“It is upsetting to see plastic pollution getting worse, especially with Samoa trying really hard to make a difference, banning plastic bags and straws and now the upcoming Styrofoam ban,” Aniva said.

“I think Samoa has been taking a big lead for other countries to follow so hopefully they start doing that soon.”

Lagipoiva said Aniva’s methodical and pragmatic approach to how Eco Toa should function helped Vaiala Beach School adopt it easily, and have carried on her work even after she graduated and went to high school.

As for her parents, Aniva has been backed all the way by her mother, lawyer Fiona Ey and father, Supreme Court Justice Leiataualesa Daryl Clarke.

Ms. Ey said many of the children involved in Eco Toa, who are passionate about their environment, are girls, so mentoring the group and her daughter is an opportunity to build up a generation of strong female leaders too.

“There is a nice crossover there between encouraging their passion for environmental conservation and stewardship and also creating opportunities for girls,” she said.

Ms. Ey accompanied Aniva and Jane to Indonesia, and watched Aniva speak on a public panel to some of the country’s environment ministry staff.

“The message was that things that are happening in Indonesia are impacting islands in the Pacific. There were people in the audience, adults from the environment ministry that were moved to tears,” she said.

“To hear it directly from young people who just speak from the heart asking adults to please do something about it, well…”

Working to protect the environment in the face of international inaction on the climate crisis can be depressing, but Lagipoiva said she hardly sees her forlorn.

“Aniva has remained steadfast in her pursuit for solutions to raise awareness,” her mentor said.

Aniva stands alongside a generation of teenagers who are not shying away from the climate crisis.

Sweden’s Greta Thunberg, America’s Alexandria Villaseñor and a group accusing Argentina, Brazil, France, Germany and Turkey of violating their rights as children to live safely are leading an entire generation who are not sure they will call Earth home when they grow up.

Fridays for Future, an international movement of children striking from school once a week to protest government inaction on climate change, got more between six and seven million on the streets of their cities for the global strikes in late September.

Here in Samoa, Vaiala Beach School also participated in the global strikes, taking the day off to add their voices to the millions of others around the world.

Unlike in other parts of the world, the protest was not against Samoa’s own government’s inaction – like other Pacific Island leaders, Prime Minister Tuilaepa has been at the forefront of demanding international attention to rising global temperatures.

“It was really striking and making a point against Australia and shedding light on the need for active leadership and a response to the needs of the Pacific Islands,” Lagipoiva said.