Working directly with the Government, Project Fatu were able to work efficiently to get donations that were needed to the right place. (Photo: Aufa'i Areta Areta)
Health
Samoans abroad
Fa’a Samoa

A Samoan family in Melbourne has rallied nearly A$23,600 (T$42,932) and thousands of tala worth of medical supplies, food and gifts for their homeland which has been ravaged by the fast spreading measles virus.

Project Fatu, the venture of Tui Hicks and her wider Matuauto family have been working nonstop for weeks to gather, sort and package donations from all over Melbourne.

They sent their first lot of 10 boxes from Brisbane to Helping Hands last week and on Wednesday, 100 boxes arrived to the National Emergency Operations Centre with another 109 to come on the weekend via Air New Zealand flights. 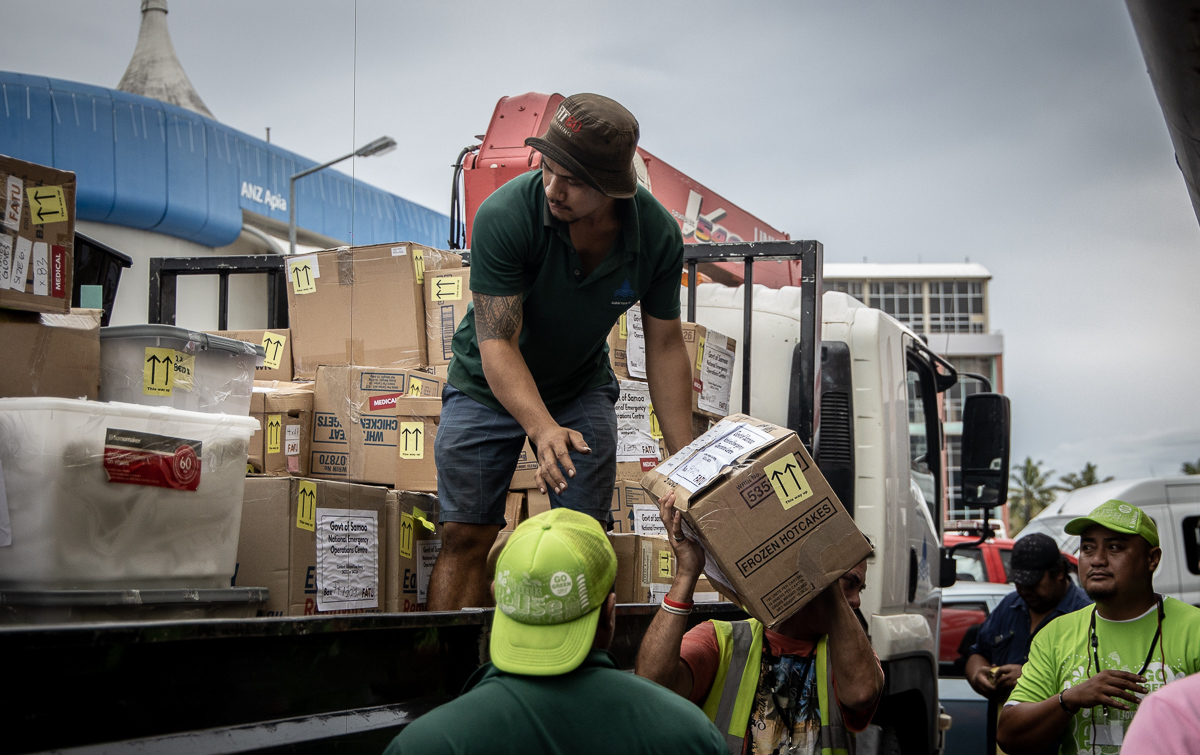 As the measles epidemic, which so far has claimed 76 lives and infected at least 5,371 people, raged on, organiser Tui Hicks and her family desperately wanted to help.

Using their social media networks and wide Melbourne family, Ms. Hicks put the call out with the hospital’s needs as asked for by the National Emergency Operations Centre.

It didn’t take long before their storage began filling up with everything on the list, from baby supplies to hand sanitiser, bedding, food and activities for children spending long hours in the wards.

“Everyone has been so compliant and obliging, it’s been overwhelming the amount of support we received,” Ms. Hicks said.

“And it’s not just Samoans but non-Samoan’s like people from my children’s school donating hundreds to the GoFundMe page.”

“Everyone we have relationships with wanted to help… we could not have done anything without all the help that we got.” 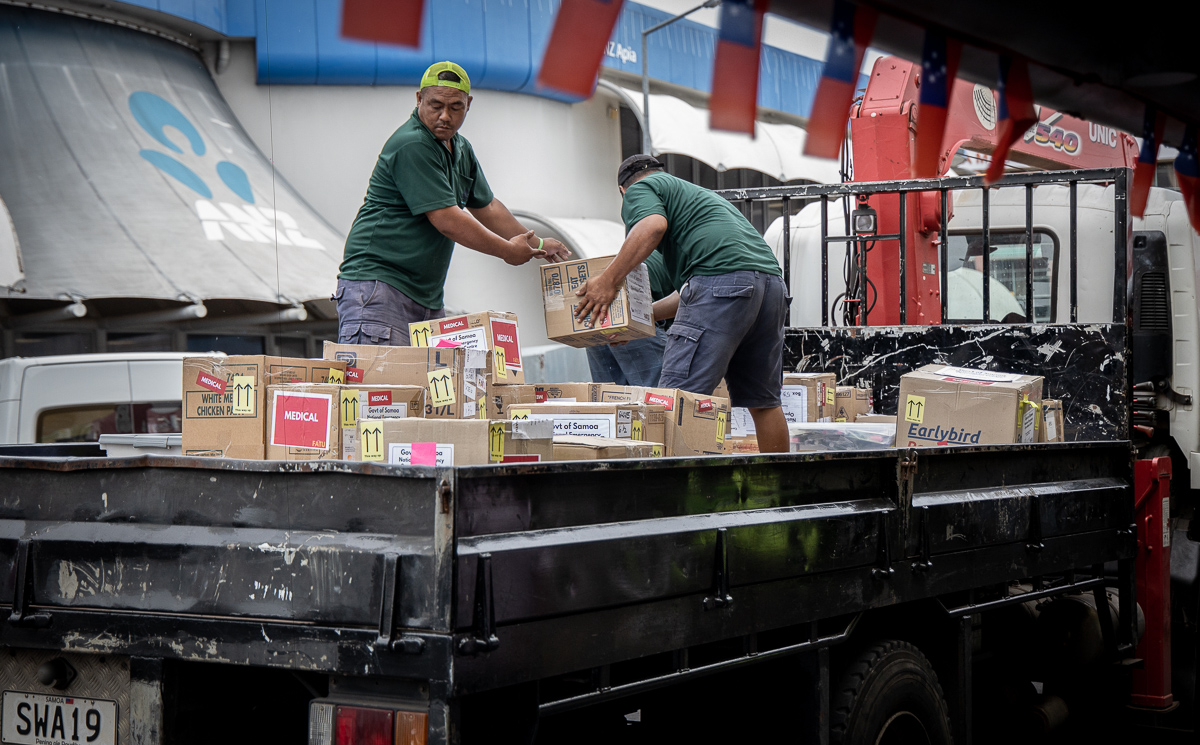 Everything donated is off new or excellent quality, rather than second hand goods, she added.

“I hope they (the recipients) feel the love of all the people that went out and shopped for these items. We would go to a supermarket and people told us there were Samoans here and they cleared out all the Up&Go or all the calamine lotion, it was hilarious.

“In the suburbs with a lot of Samoans, they ran out of stock of the items on the list.”

Abigail Lee Hang from the Ministry of Finance has been their local Government liaison on the ground.

“I know a lot of the staff having lived in Samoa for over 10 years,” Ms. Hicks said.

“I trust that the Government will allocate the donations and the money to where it is needed most. I don’t have the resources and the time to bring it over myself and distribute it, and sometimes you could double up or miss out on people.

“If we go through one central point then it’s the best way to have all these donations distributed.” 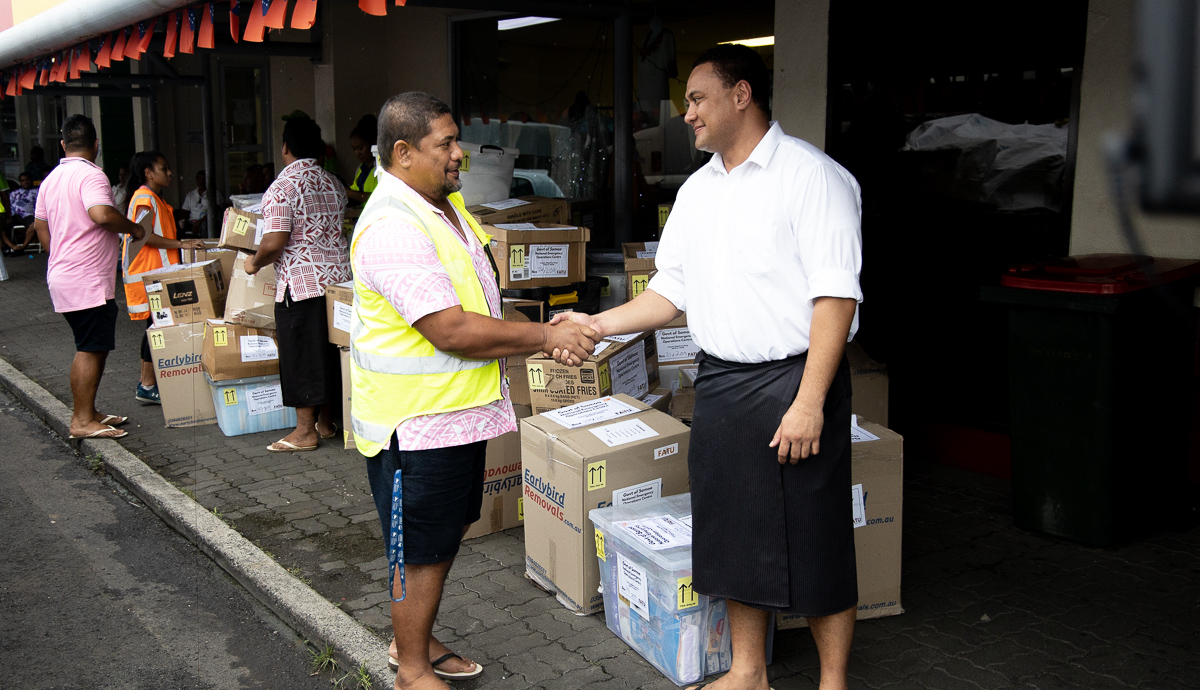 Outside the Disaster Management Offices where the N.E.O.C. has been stationed for a month, staff waited expectantly for the truck full of goods to arrive from the airport. When it finally pulled up, the team made short work of emptying it onto the sidewalk, cataloguing what had arrived and making the necessary preparations to distribute it.

Just under half of the boxes were clearly marked ‘medical’ with a red sticker. Those boxes stayed on board the Samoa Water Authority truck, destined for the Tupua Tamasese Meaole Hospital instead.

Luckily for everyone, the rain held off from really coming down until all the boxes that needed to be were offloaded, and the rest covered up with a tarpaulin.

Ms. Hicks said right now the GoFundMe will remain open but the donation collection is on pause. The N.E.O.C. will advise them if there are any more gaps in resources, she said.

“Everyone was feeling quite helpless and sad about what was happening back home,” Ms. Hicks said.

She and her family had intended to visit Samoa during this holiday season and opted not to because of the epidemic. So she has especially been missing home lately, Ms. Hicks said.

“I was there during the tsunami and I felt the sorrow of the nation.

“We were able to help on the ground. So having gone through this process with my family here it’s been a special experience.

“Having Samoans feel united is special.” 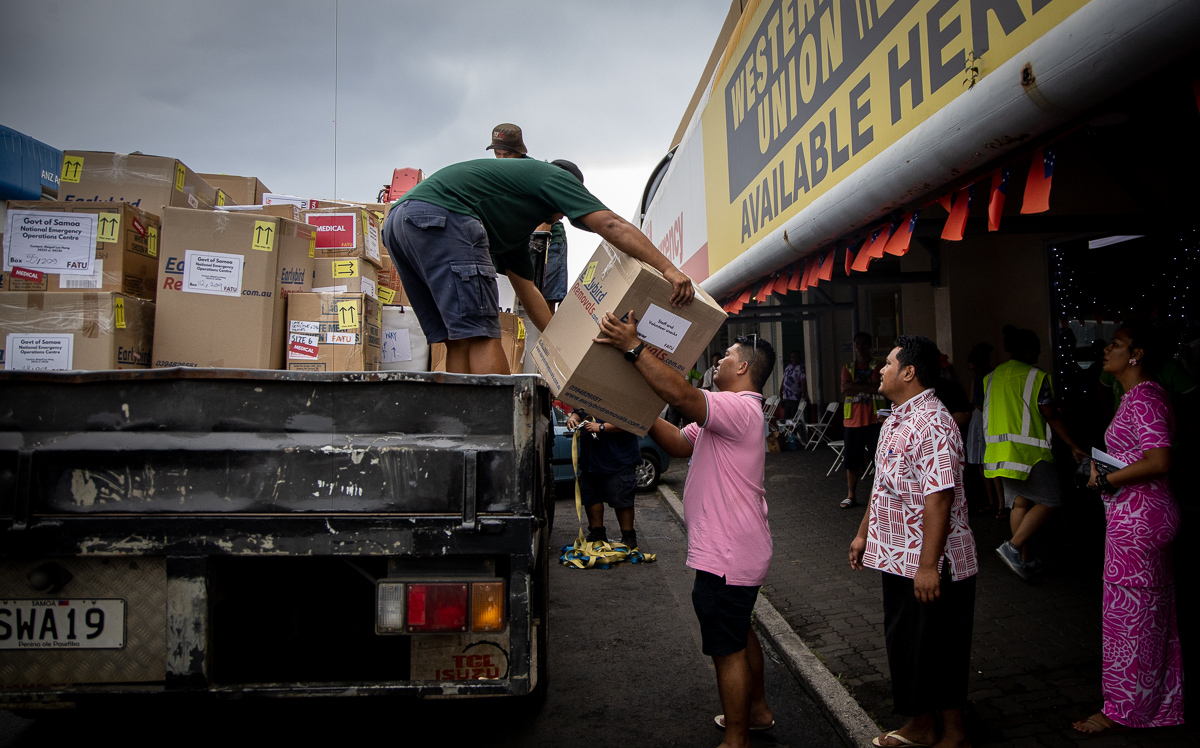