Amidst the measles crisis, the Tupua Tamaese Meaole (T.T.M.) Hospital Maternity Ward provided moments of hope this week, with two sets of twins and three different babies being delivered.

Vaimoso couple Fuaono and Lia Ropati’s brood of three grew by two more at once, with twin baby boys Leubert Roger and Leubert Brian – named for Dr. Brian Magowan who helped deliver him and his brother into the world.

The twins were both in breach and had to be delivered by caesarean section. Ms. Ropati was in hospital for four days altogether, and the surgery took maybe five minutes.

“It was so fast,” she said, laughing a little and holding baby Leubert Brian close.

Going into the hospital, she was a little scared. Not really because of the measles epidemic, but because “I watch a lot of movies!”

But throughout the operation, Dr. Magowan and the other doctors talked her through the process, and checked in often to make sure she was feeling alright.

Asked what her family’s plans are for Christmas, Ms. Ropati said nothing out of the ordinary.

“Just to spend time with my babies is enough,” she said.

Dr. Magowan met the couple and their newborns at their home in Vaimoso a few days after the birth. The entire family greeted him warmly, and he was shocked to learn one of the twins carried his name.

“It is a real privilege,” he said.

“You were so relaxed, and chill, just so smiley through the whole thing,” he said to Ms. Ropati.

Mele Tupa’i and Jerry Falefatu from Lufilufi are the proud parents of two healthy twin boys, named Kirisome and Pelnato, who join their one and half year old sister. 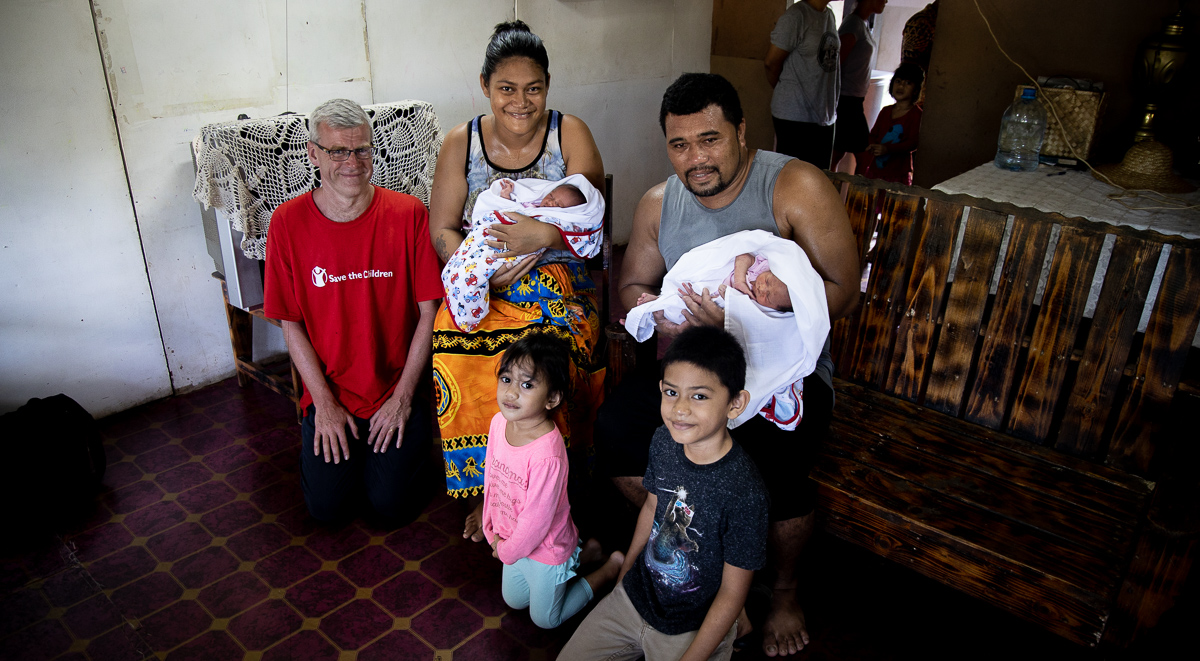 They were also delivered by caesarean section in the early hours of Sunday morning. Ms. Tupa’i said two scans showed they were not quite positioned right for a natural birth.

Dr. Magowan and his team delivered the babies quickly too, taking about ten minutes.

Dr. Magowan said working at the hospital, among an incredibly organised and talented group of local staff was impressive.

“I have worked in a lot of teams, I have visited a lot of places, and it’s a really tight, engaged, positive team that work extremely well. I am really very impressed with the standard of care. 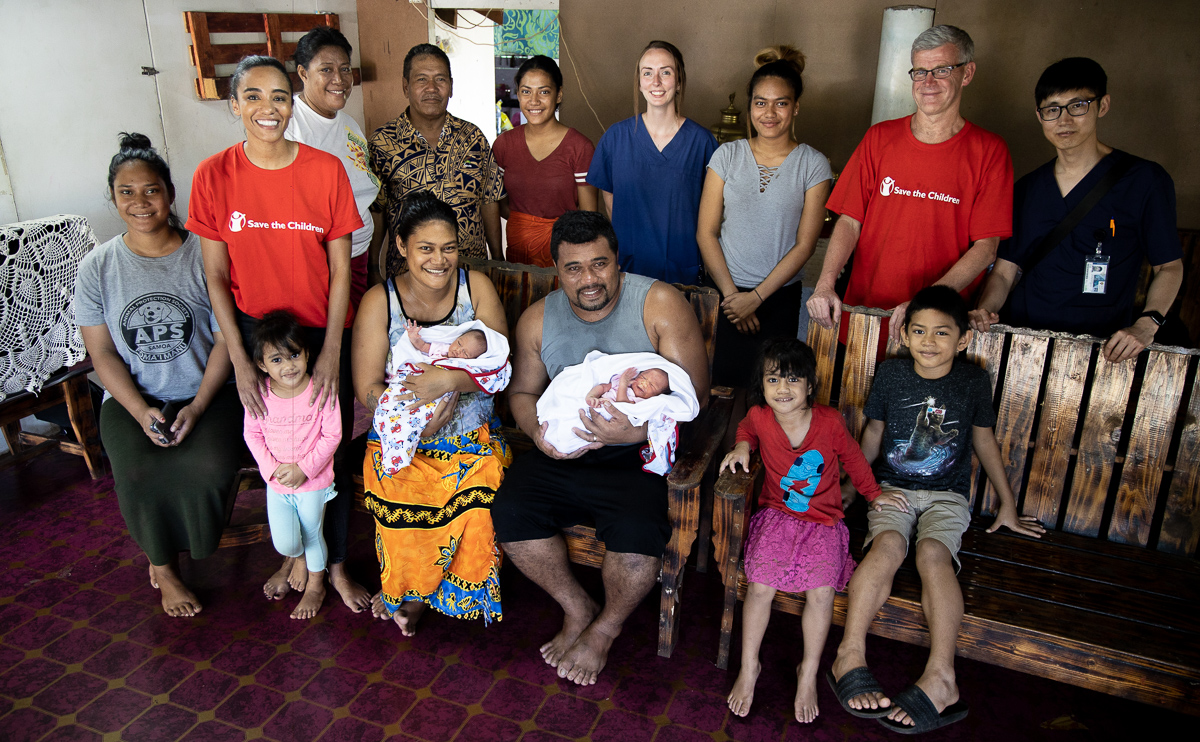 “What they are doing, it feels like my own hospital in some ways, I have been exceptionally impressed in a way that I wasn’t expecting to be; both by the standard of maternity care and by the quality of the team which I think is first class.”

Pregnancy is also a risky time for women but in the midst of an epidemic against which they cannot be vaccinated there is extra concern all round. For the women who contract measles, both they and their unborn child are at serious risk of complications.

Dr. Magowan said the maternity ward at T.T.M. is well protected and isolated from measles, making it a safe place to deliver babies. He called the ward “very sensibly thought through.

“I was nervous for the sake of the mothers,” he admitted.

“We have had mothers who have been affected but thankfully none for six or seven days.”

He imagines he will be delivering at least a dozen more children in the coming days.

Team Lead Dr. Louisa Baxter said the team have felt nothing but kindness and open arms from the Samoan healthcare and emergency response teams.

Save the Children deploys medical expertise all over the world, some to exceptionally dangerous countries. This deployment to the South Pacific is rare, Dr. Baxter said.

“Being able to help deliver healthy babies and support the Samoan midwives who have been working so hard for months has been an honour for us, and having one of the twins named after a Save the Children doctor makes us very emotional.

“It makes leaving our own families at Christmas so meaningful.”

Dr. MacGowan, who is stationed at T.T.M Hospital alongside two Kenyan midwives, Mary Syethii and Micla Nyamache, from Save the Children, said it has been a busy season but a meaningful one.

“I think there is something really quite special about having twins at this time of year,” he said.

“We’ve done a case today of a patient who has lost a number of babies, we’ve been able to do an operation which will hopefully make it a lot more likely for her to be successful.

“[There has] not a single case of measles in the past six days in the maternity ward which is a huge testament to the way things are moving forward here.”

The obstetrician is working in the antenatal and post-natal clinics, in particular with pregnant women who have contracted measles and have needed intense treatment.

The three are here with Dr. John Sekibibi from the Congo, logistician Rocco Massad from Lebanon and nurse Kelly Alliston from the United Kingdom. A second team is set to arrive on the weekend to take over.

“The team are really enjoying working in collaborating with the Samoan clinical team and are so grateful to have this opportunity to support the Samoan people at this time,” team lead Dr. Louisa Baxter said.

Mary Syethii, a midwife from Kenya said the labour ward has been overstretched, hence the need for their support. She said a mother they helped this week was giving birth to her seventh son, and gratefully accepted the offer of contraception to manage her growing family.

The rest of the Save the Children deployment is in the paediatric ward, working on infection prevention and in Faleolo Hospital alongside the New Zealand Medical Assistance Team.

In the first weeks of the mass vaccination campaign, women of childbearing age (20 to 35) were a priority group. Based on the 2016 census there is an estimated 44,286 such women in Samoa.

The Government estimates 6,444 women could be pregnant, with 2,148 babies about to be born in the next three months, 15 per cent of which may face obstetric complications and need caesarean sections or the like.

“There is increased need for antenatal management and psychosocial support to women who are pregnant and test positive for measles,” the Government said in the National Measles Appeal document, released earlier this month.