The Vaitele Uta Congregation donates towards the fight against the measles epidemic. (Photo: Aufa'i Areta Areta)

The 13 days of Christmas has taken a twist this year following its abrupt cancellation due to the Government's state of emergency orders.

The 13 days of Christmas programme was launched by the Prime Minister, Tuilaepa Dr. Sailele Malielegaoi on Thursday night with one live performance: Eme Toala Eteru who delivered a rendition of 'Le Ali'i e'.

The Congregational Christian Church of Samoa's Vaitele Uta programme opening was broadcast live from the TV1 studio in Mulinu'u but for the remainder of the period it will broadcast only previous episodes and performances from years gone by.

This is the first time in the 21 years of the programme to not have live performances.

The main reason of the cancellation was due to the ban on children performers under the age of 19, as most performing groups include children. 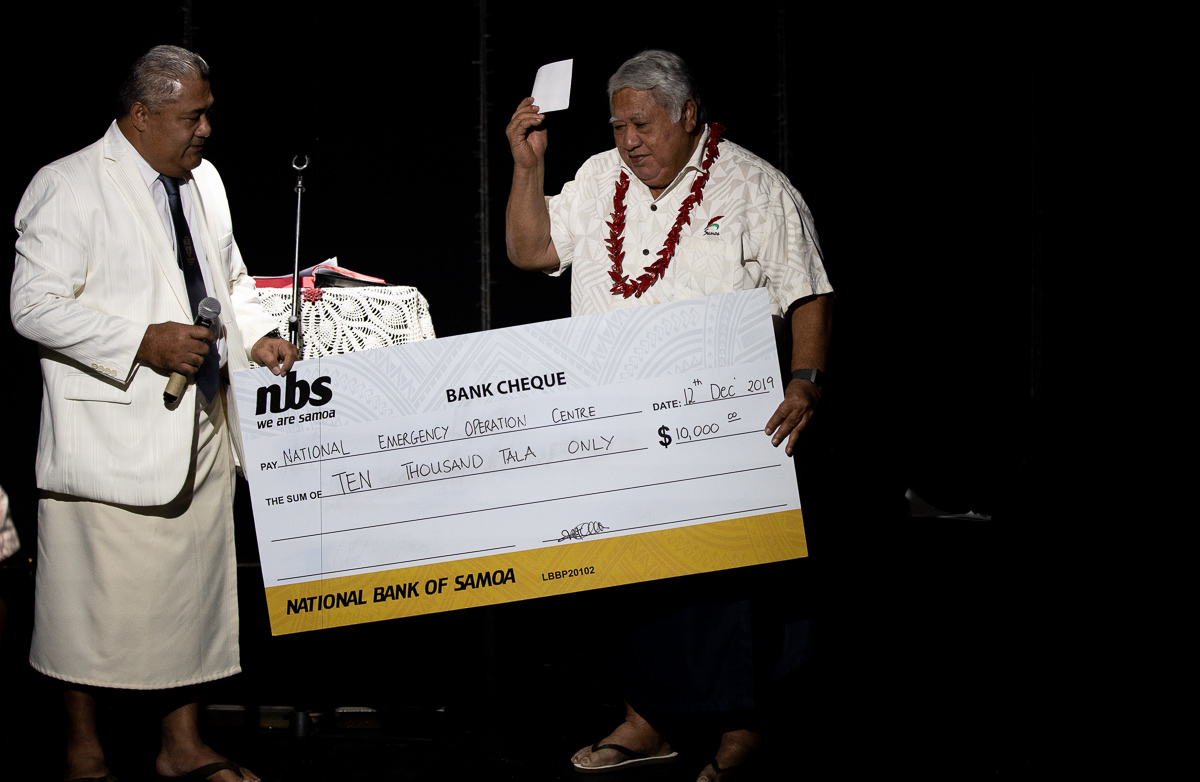 "This programme is usually aired live straight from the Congregational Christian Church of Samoa in Vaitele Uta but there were also precautions for the prevention of the spread of the measles through large gatherings," said Tuilaepa .

"This is why we have changed it for the first time ever to be in this studio at TV1 to continue the programme by playing selected performances from previous years, so we can again feel the Christmas spirit along with the rest of the world."

Last month, the C.C.C.S. Vaitele Uta's Pastor's wife, Tauvela Su'a, told the Samoa Observer that the performers who were scheduled to take the stage this year will do so next year.

"We know they have all been prepared and the congregation have also prepared, the letter notifying all of them regarding the cancellation of the programme, but get ready for next year, God willing," she said.

In addition to the launching of the annual programme, the Vaitele Uta C.C.C.S. Reverend Muao Su'a presented Tuilaepa with a cheque of $10,000 to assist in the Government's fight against the measles epidemic that has swept the nation for about three months.

The tradition of having the the Ministry of Police’s Choir kick start the performances on the first night was still made possible as their previous performance was aired last night to open the programme.