The Minister of Works, Transport and Infrastructure, Papali’i Niko Lee Hang, has called for reduced greenhouse gas emissions and the phasing out of fossil fuels at an international maritime meeting.

The Minister led a five-member delegation from Samoa at the 31st Session of the International Maritime Organization (I.M.O.) Assembly held in London last week.

“Our vulnerability to the impacts of climate change have been heard and it will be no different today, that we call upon member states of the I.M.O to reduce greenhouse gas (G.H.G.) emissions and phase out fossil fuels as soon as possible consistent with a no more than 1.5 degree Celsius pathway,” stated Papali’i, when he addressed the main plenary.

The Minister told the meeting that Samoa is committed to a cleaner environment and long term efforts being made in relation to renewable energy and energy efficiency alternatives.

“For the Pacific including Samoa, climate change is the single greatest threat to the livelihoods, security and wellbeing of the peoples of the Pacific and our commitment to progress the implementation of the Paris Agreement,” he said.

“It has impacted on our human, economic, social and environmental security. In response, the Framework for Pacific Resilience has been developed as the roadmap to progress to climate resilience infrastructure and reducing emissions from ships.

“Samoa calls on member states of the I.M.O. to adopt and implement measures which will achieve greenhouse gas emissions reduction in line with the target we have all agreed to in the Initial Strategy.”

He also highlighted some of the milestones and achievements by Samoa’s maritime sector in relation to the protection of the environment.

“With respect to maritime transport, one of our inter- island ferries has been retrofitted with solar panels to generate electricity when in port. It is estimated that this will save approximately 17% of operating costs,” Papalii said.

“This is a significant milestone for our country in that it is the pathway to ensuring energy efficiency on our domestic vessels.

“We are appreciative of the Global Maritime Technology Cooperation network for their investment in promoting energy efficiency in the maritime sector and to navigate shipping towards a low-carbon future.

“Samoa has also progressed on the Green Port Development project for more energy efficiency. The implementation of our NDCs will be through enhanced and durable partnerships in financing low-carbon technology, capacity building initiatives and building resilient structures.”

Samoa becoming a member of the International Hydrographic Organization remains a proud moment, the Minister noted.

“Samoa is committed to enhancing safety at sea and the protection of the right of safety for all at sea. Recently, hydrographic surveys were completed for Samoa and as such, we can expect our nautical charts to be updated and modernised to ensure safety of navigation,” he said.

“The Pacific Regional Marine Spill Contingency Plan 2030 (PACPLAN) is enhanced by the support of New Zealand and Australia.

“Under the PACPLAN, Samoa developed its own National Plan on Oil Spill Response of which we will be the recipient of oil clean-up equipment kindly donated by Maritime New Zealand as well as opportunities to train our port personnel in the use and application of the oil clean-up equipment.

“We cannot emphasize enough the importance of preparedness for disasters such as an oil spill within our waters. The ramifications would severely harm the health of our ocean, our marine and coastal environment, with many years to recover.” 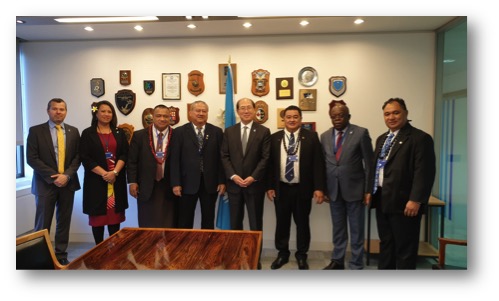 Papali’i reminded the I.M.O. meeting about the outcome of the Pacific Regional Energy and Maritime Transport Ministers meeting hosted by Samoa recently.

Among the priorities identified were safety for all at sea; responsibilities by flag states over their ships; need for resources to ensure safety of navigation at sea to avoid marine casualties and pollution among others.

“Samoa has also committed to decreasing our domestic maritime transport emissions by 40% by 2030 and 100% by 2050 as part of the Pacific Blue Shipping Partnership which was recognised by the region’s maritime transport Ministers.

“More importantly, there is a critical need for capacity development and a people-centred approach in the maritime industry to be able to understand new technologies under greenhouse gas emissions and low carbon maritime transport.

“A key development in this regard, is to implement actions under the Regional Strategy for Pacific Women in Maritime, emphasising the key role of women in maritime and their contribution to the shipping, ports and administrative roles in maritime. Samoa urges member states to facilitate the participation, recognition, visibility and capacity building of women in maritime to ensure no one is left behind.”

Lastly, that Samoa is looking to endorse what is known as the Cape Town Agreement 2012.

“Recently, Samoa was represented at the Ministerial Conference, where we highlighted the need for an international framework to ensure fishing vessels comply with safety standards for fishing operations as well as deterring illegal, unreported and unregulated fishing in our national waters and the Pacific region,” he said.

“We have seen the inevitable growth in numbers of foreign fishing vessels at our international port which must comply with regulations set for fishing vessels greater than 24m.

“Our Pacific Leaders endorsed the Blue Pacific Continent concept which recognises that we are large ocean states and stewards of our Pacific ocean. As such, it is incumbent that measures and standards are implemented and enforced on those ships that continue to flout the rule of law governing shipping.

“It is in this regard that we would like to reiterate strongly, that Samoa is, and continues to be a closed registry. There have been many unfavourable reports of ships illegally using our flag which must be dealt with by the full force of law by coastal and port states.

“In conclusion Madam President, my delegation supports an IMO regional presence in the Pacific region. The visibility of IMO in the Pacific region would build on existing partnerships and technical cooperation programs of the UN and its specialised agencies in our Blue Pacific region. Samoa calls on the IMO to pay special attention in the design of country-specific technical cooperation programs based on national priorities and a consistent deployment of contextualized global projects.

“The UN System has three sub-regional offices in the Pacific. My Government has already extended an invitation to UN agencies not represented in Samoa or the Pacific to join the One UN House in Samoa – this reinforces what we as Small Island Developing States have repeatedly called on the UN to do: to deliver better together, and to establish more genuine and durable partnerships to innovate the way we work together. “