A team of D.H.L staff members have convinced their boss to fund the transport costs of medical supplies to Samoa to aid the response to the measles epidemic.

Karen Taavale and five of her colleagues in Brisbane have rallied their community to donate desperately needed medical supplies, bedding and nappies to Samoa. And now the costliest part of the operation is taken care of.

The first lot of supplies will be sent to Samoa this weekend, followed by another less urgent lot of goods that will come be sea freight.

A New Zealand born Samoan with roots in Lepea and Manono-uta, Ms. Taavale said it has been hard to watch the measles epidemic unfold from afar.

Her own parents are desperate to get home and help out but have to contend with doing what they can from Australia.

Her mother’s family has lost a two year old girl to measles, and it was that death that galvanised Ms. Taavale to help her people back home get through the crisis.

“It’s a different feeling when it happens to your own family.

“Just like everybody else, we thought the measles was going to blow over in a week. But as the death toll continued to rise we realised we need to do something.”

There were other groups of people gathering medical supplies, gifts and resources but no one had organised freight yet, Ms. Taavale said. That is when she turned to her own employers for help.

At first they asked for discounted prices on freight, and were amazed to learn they would be offered no charge at all. There was an approval process to undergo, but everything was sorted within three days.

And the response has been immense.

“We were expecting more donations from private individuals but a lot of companies have come through gathering goods and dropping them off.

“We have an excellent supply of nappies, at least 12 big boxes of nappies,” Ms. Taavale said.

The D.H.L. Express Call Centre has offered a storage room for some of the supplies, and Ms. Taavale and her colleagues opened their homes as drop off points for donations. They will gather on Thursday to sort everything, and get it loaded up for transportation to Samoa.

Some supporters have opted to contribute money too, and nearly AUD$1500 has been raised already.

The team has been working with the Ministry of Health who told them what they still need at the Hospitals, and who will be receiving the goods when they arrive.

Ms. Taavale said while clearly the epidemic back home is hitting everyone hard, mostly she and her friends have busied themselves with the donations and have not spoken too much about how they are feeling.

“I think we are all just trying to keep busy with these donations and gather as much as possible. We haven’t really had a chance to sit down properly and talk things through.”

Donations are still being accepted until December 13. Details below: 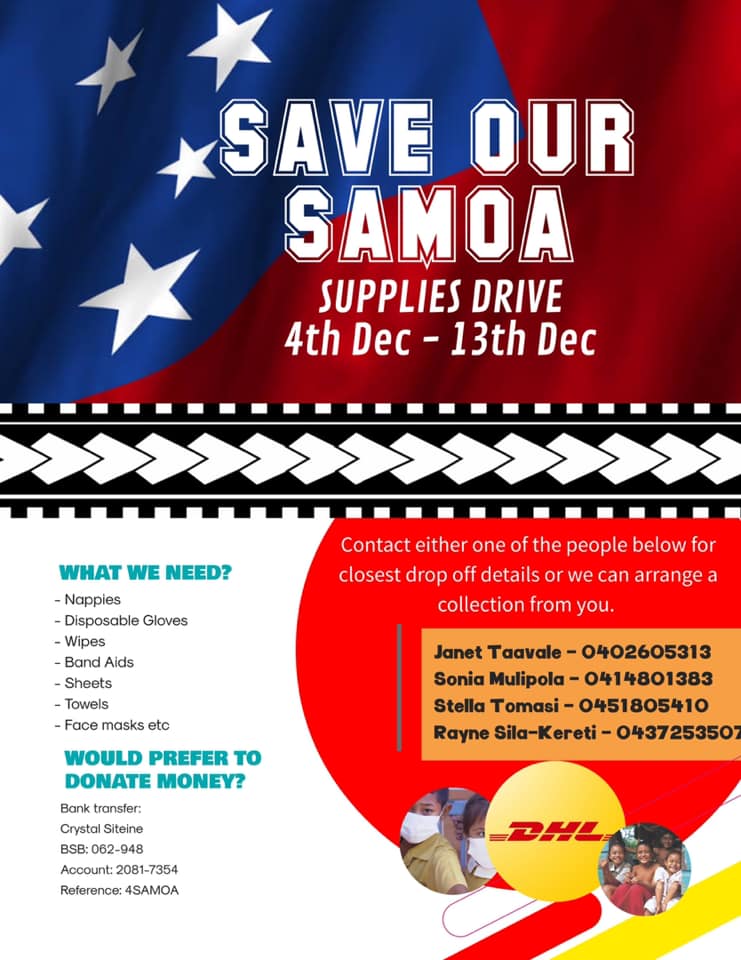