More than 40,000 people were vaccinated during the 20 hour mass vaccination campaign which saw Samoa go on complete lockdown.

Prime Minister, Tuilaepa Dr. Sa'ilele Malielegaoi, confirmed the statistic saying "preliminary" figures suggest more than 40,000 people were vaccinated, but they have to wait for the Ministry of Health to verify the count.

As of press time, they have have not been able to break down the number into age groups or sex.

Prime Minister Tuilaepa said the official figures will be released after the weekend.

It means that in less than three weeks, over half the population of Samoa has been inoculated against the measles virus which has killed 63 people.

According to the Government, it accounts for at least 140,000 of the eligible population of 143,255 (excluding over 60 year olds, pregnant women, under six month year olds and other immuno-compromised which may not be vaccinated).

Some mobile teams will remain active on the 999 line and can be called door to door for vaccination, Tuilaepa said, as he does not envision another nationwide shut down needs to happen.

He is cautious to encourage "spoonfeeding," however, and wants people to take initiative to get vaccinated.

Despite the figures, Tuilaepa said he won't be satisfied until he sees 100 percent coverage.

"My pride is yet to be determined because I still don't know what percentage we have achieved. It's quite possible we achieved 101."

The more than 100 mobile vaccination teams dispatched on Thursday and Friday were armed with not only their clipboards but with an online platform for uploading the details of whom and where they had reached.

It was an uneasy marriage between the health and statistics sector, Tuilaepa said, because of the sensitive data nurses gather about their patients.

"To marry the two ministries, you know, it’s very difficult.

“One simply records but the other has more sensitive information related to health they need to be cautious about. You do not want to have your name there disclosing you suffer from very strange illnesses.”

While the finer points are figured out, he just wants the Ministry of Health to release basic vaccination figures from the mass campaign.

Up until the two day mobile campaign, vaccinations were being recorded manually and collated for daily reports by the National Emergency Operations Centre for release. But Tuilaepa wanted a "quick glance" at progress, and ordered for the system to be digitized.

"We [also] need to respond very quickly to the overseas media that were here, for them to see what we want to do to upgrade our IT.

"This could be the kind of service we need to implement quickly to cater for any further catastrophe of this nature."

Tuilaepa said for at least five years, there have been plans to use technology for crisis management and better communication, but that it had never been ready.

“We have had problems with consultants that came and we found to be incompetent,” he said, explaining the delay. He said if not, the systems may have been in place even two years ago.

“This is the kind of system we will be using when the next disaster hits us, everything will be fast and that will help us decide quickly on the moves Government must do." 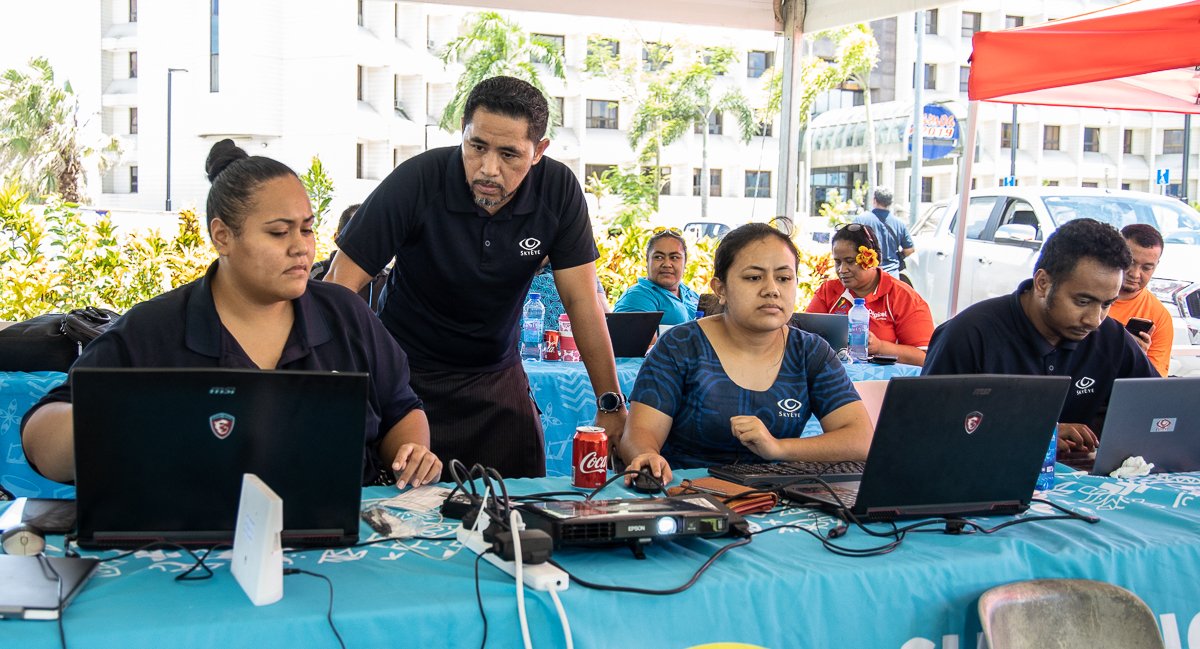 The Ministry of Health told them what kind of details was needed so that the opportunity to gather data was not missed.

“The request was to try and get the data in much faster and have more meaning in the data like with GPS coordinates and a few other details that only digital devices can get.

“The government requested it and we built the system in two days,” Fa’aso’otauloa said.

With just an hour to train the people who would use it, the interface had to be as user friendly as possible, he added.

It hasn’t been entirely smooth sailing – not every mobile team used their digital platform at every stop so a lot of the data was manually written too. It will take time to add everything together to get the absolute picture of the campaign efforts.

But for now, Fa’aso’otauloa is satisfied to see the concept works.

“When things like this come up and we are invited to work we do have the ability to do it. It’s been put together quite quickly.

“I think we are lucky in the sense that our leaders are open to partnering with us,” Pepe said.

“Our leadership understand the benefits of having strong partnerships.”

Pepe, looking around the Digital Tent stationed in front of the Government Building at the young cohort of tech-volunteers said he saw the future of Samoan leadership in them.

“Understanding how one person with good intent and a good attitude, how they can help something as big as this that is bigger than all of us,” he said.

“These young people, they will take great learning and personal satisfaction – you can’t stop what happened in the past but by their involvement they are making a difference to the whole thing.

“If anything was to happen, these are our future leaders.”