The Clinical Team Leader for the first team of doctors and nurses from the United Kingdom’s Emergency Medical Team (U.K.EM.T.), Stephen Owens, has acknowledged the hard working local health workers who are battling the deadly measles crisis.

“We have nothing but respect for the clinical teams here in this hospital because what they have been doing these past few weeks has been absolutely extraordinary," he told the Samoa Observer.

“Everyone looks like they have worked their fingers to the bone and there is just too much, it’s just too heavy.

“Our job is augmenting that capability and taking some of the stress from them, partly so they can look after children with non-measles problems and also to give them some downtime, so they can carry on-working in the long term without burning out completely.”

The first team of doctors and nurses from U.K.EM.T. began work on Monday morning, and will work in the wards for two weeks.

There are four doctors and eight nurses alongside a team lead, and they are all experienced in paediatric medicine.

The nurses will be stationed across the Australian built High Dependency Unit, the paediatric ward and the intensive care unit as well as the Acute Primary Care Clinic where emergency measles cases are being attended to.

The doctors are spread between the APCC and the paediatric department.

Mr. Owens is a specialist in paediatric infectious diseases. He said he would typically see one or two cases of measles a year in his home, all of whom recover.

In the two days the team has been on the ground, it is clear to them how hard the Samoan staff have been working to manage the epidemic, Mr. Owens said.

Mr. Owens said he has been surprised at the level of impact measles is having on Samoa’s children.

In the paediatric unit there are nearly 50 measles infected children with a form of complication, he said, and most of them with severe pneumonias.

“Now these are not primary measles pneumonias, per se, but they are the result of bacterial added infections in a child whose immune system has been flattened by the measles virus and the severity of those infections is very striking and it’s unlike anything I have ever seen before," he said.

He said the youngest children have always been the most vulnerable to measles, and so the “striking” amount of severe complications likely reflects how few infants with measles he has had to treat in the past.

“We were very taken aback by that.”

He said it has been difficult to identify any risk factors for severe reactions to measles that might otherwise explain why the impact has been so deadly on Samoa’s young children.

Of the 60 deaths, 52 are in children under four years old.

“In terms of the textbook, what they would normally tell us would be a problem is malnutrition for example, we are not seeing that here, the children are very well nourished and there is no evidence as far as I can tell of vitamin A deficiency which is another risk factor,” Mr. Owens said.

“I think it really is a feature of the fact that the group who have the lowest vaccine uptake prior to this outbreak are the ones suffering the consequences of that.”

Treatment has been a challenge too, with some bacteria resistant to antibiotics found in some cases. But that is not the general picture, Mr. Owens said.

Overall, the pneumonias are too severe for treatment to take hold quickly enough. 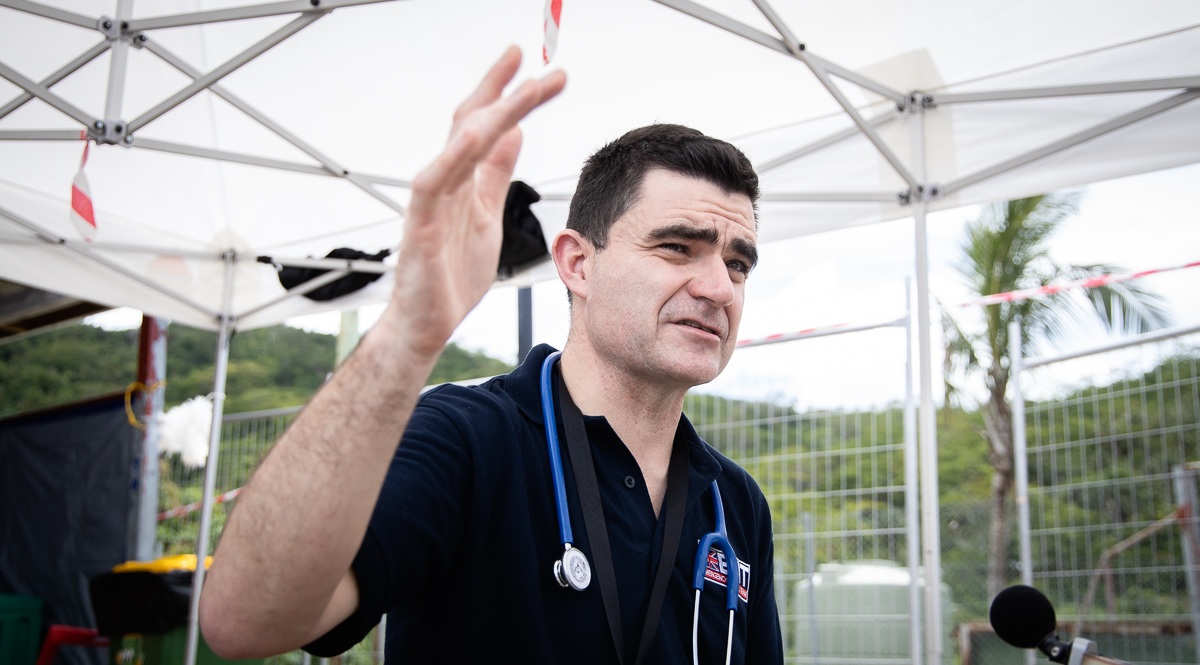 Nurse Becky Platt has been stationed in the measles specific emergency department.

She told U.K.E.M.T. that she spent Wednesday morning resuscitating children.

“We’ve seen multiple children this morning with significant complication related to measles,” she said in a video aired on Twitter.

It is yet to be decided if another UKEMT deployment will be sent to Samoa when this group finish.

“Some of those children are struggling to maintain their airway, many are having problems breathing, most of them are significantly dehydrated and we’ve been essentially resuscitating children all morning.”