The NRL, led by Martin and Michelle Taupau are raising gifts for Christmas for Samoans affected by the measles epidemic. (Photo: Supplied)
Health
Samoans abroad

The National Rugby League of Australia is backing Martin and Michelle Taupau to collect children’s toys to send to Samoa before Christmas in an effort to ease the pain of the measles epidemic.

With money, food and hospital resources being raised across Australia and New Zealand, the newlywed pair felt if they were going to help their people, they needed to fill a gap.

And knowing how much happiness the N.R.L usually brings people, they thought to do the same.

“We just want to bring joy and happiness and support there. We are here to show love, and are keeping everyone in our thoughts and prayers,” Taupau said. 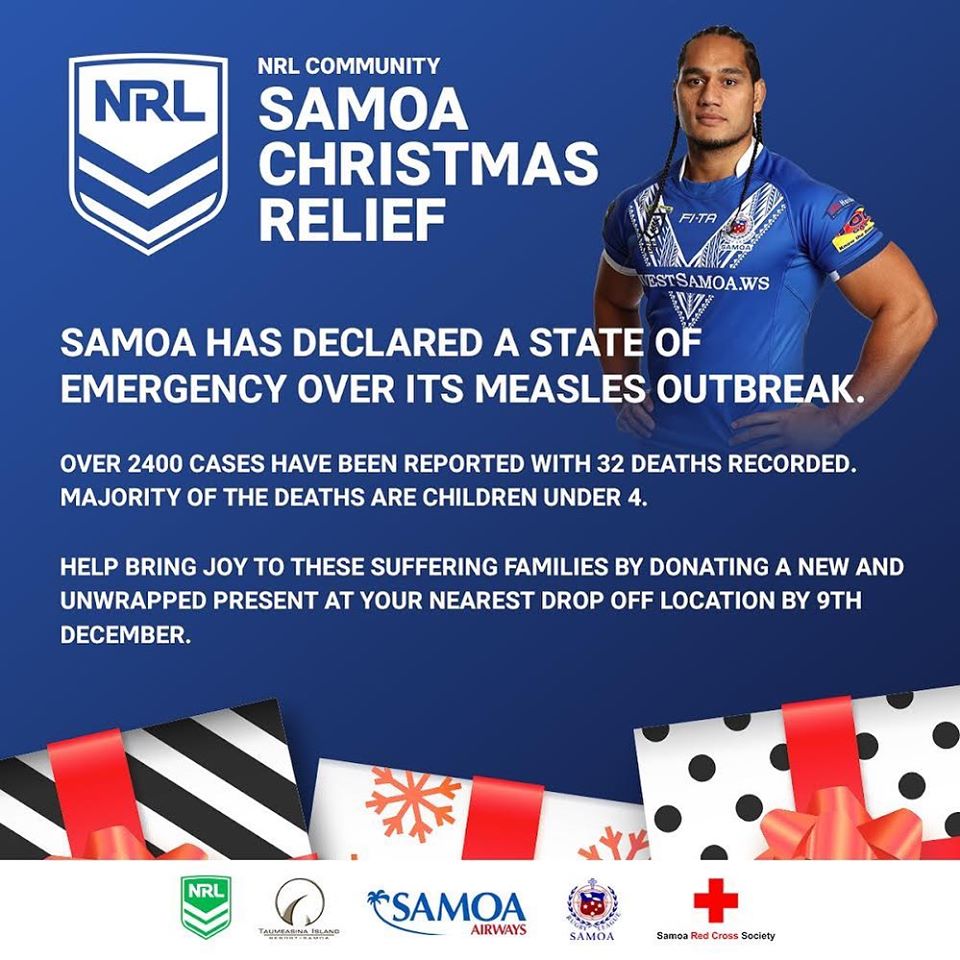 The rugby league player, who is Samoan, and his wife said the measles epidemic, which has killed at least 44 people, mostly children, and infected at least 3,357 people has been weighing on their minds.

They live in Sydney and feel far from their second home during its time of crisis, especially having just gotten married at Taumeasina Island Resort last month.

“Anything that happens over there deeply affects the way we feel and the way all Samoans feel,” Mrs. Taupau said.

“We have children, and couldn’t imagine how that would feel, going through all that fear and worry, or losing a life.”

They said across Sydney where they live, the Samoan community are deeply moved by the crisis happening back home.

“Samoa is the heart of the Pacific, and we are a very strong though small nation,” Mr. Taupau said.

“We have some amazing players, Samoan or not, they are bringing the awareness and are on board and supporting the response to this terrible epidemic.

“There is definitely a lot of sadness, it’s quite sombre,” Mrs. Taupau added. “When it comes up, it’s a sombre feeling, everyone really feels the impact.

“Everybody has children and to know how many lives lost of children under four that causes any person of any background to pause and reflect on that, because it is just such an unnecessary and devastating loss of life.”

The couple have coordinated with the N.R.L, which Mr. Taupau plays for and Mrs. Taupau is the Community Relations Manager of, to organise several drop off points across Sydney where donors can bring toys and gifts to get to Samoa ahead of the festive season.

The N.R.L have already contributed 12 boxes of merchandise and memorabilia, and the couple expect donations will begin arriving from Monday to the N.R.L clubs on the allocated dates (below).

With Christmas in just four weeks, Mr. Taupau wanted to bring joy into a difficult time for all Samoans.

They are getting help from Samoa Airways and the Australian Defence Force to deliver the gifts from Australia to Samoa, and the Samoa Red Cross Society and Rugby League Samoa will sort and deliver the gifts to the neediest families.

Their friend Tuiataga Nathan Bucknall, general manager of Taumeasina Island Resort helped them connect with the airline to ensure their toy drive would actually make it to Samoa.

“It was really important to us that every partner we engage was reputable and reliable. The last thing we wanted was for things to go wrong because we didn’t have the right partners in place and I think that will determine the success of this,” Mrs. Taupau said.

Both Samoa Airways and the Australian Defence Force are filling their cargo with supplies and donations for Samoa battling the epidemic.

Nearly 40 per cent of all N.R.L players are from the Pacific, Mrs. Taupau said, so the community is eager to do their part for a situation that affects them all.

“Because the Pasifika community is so important to our game, when something impacts them like this and we have the ability to do something, I guess we wanted to.”

Alongside the sadness of the epidemic comes the strength the couple feel from being able to help in some way.

“When you are so far away and feeling helpless, to be able to do something… it’s heart breaking,” Mrs. Taupau said.

The couple also wanted to honour the frontline doctors, nurses and workers on the ground managing the epidemic and treating its victims.

“Our gratitude and deepest respect goes to them,” they said.