A volunteer nurse from Queensland was swept off her scooter by a passing car on Monday, less than a week into her stay helping the mass vaccination campaign against measles.

Lexy Carroll, who has volunteered for Samoa Victims Support Group on-and-off for six years, and spent a year in 2017 as a volunteer nurse educator in the National Health Services, knew she had to return to Samoa when the measles epidemic took hold.

After the state of emergency was declared earlier this month, she wrote to the National Emergency Operations Centre for instructions and landed on island just three days later. She will stay until late December.

But now Ms. Carroll is out of action for a couple of days recovering from serious gravel rash, whiplash and bruising from the accident.

“I was really emotional knowing he took off… that is not the Samoa I know,” she said.

“I come to Samoa because I want to help, I love its people, I love its culture and to me it was so insulting and insensitive, and I cannot imagine why anyone would be like that to someone.”

Since Wednesday, Ms. Carroll has been stationed at the Samoa Tourism Fale vaccination site. On their way back to Tupua Tamasese Meaole Hospital on Monday evening, she had driven ahead on her rented scooter while the rest of the team followed in the clinic van.

Just after the Samoa Police Headquarters on Beach Road, the taxi overtook her and “sideswiped” her.

“It caused the bike to slide out from under me, and then he just took off," she said.

“I thought that maybe he was pulling up further up in a safer part but when I turned around and realised I was completely alone on the road, I realised he had taken off.”

Traffic stopped around her and drivers got out to help Ms. Carroll said, including her team from the clinic who got her to the hospital.

“I could tell straight away it was nothing serious but I know from experience that a lot of that is adrenalin and I would be sore afterwards,” she said.

“I remember my head bouncing on the road and thinking thank God I got the good helmet from the bike shop because it went thud, thud, thud on the road.”

Ms. Carroll said the worst part of the experience is that the driver didn’t stay to look after her, and wishes they had stayed to try and talk.

“We all make mistakes and I am sure he didn’t mean to hit me. But everything can be sorted out through conversation like apologies," she said.

She said the accident was a reminder that many drivers in Samoa are not experienced in navigating bikes or scooters on the road.

In the years she has ridden across the country, Ms. Carroll said she has been swerved at, grabbed at, and even had things thrown at her while on a bike or scooter.

“They don’t have an appreciation of how vulnerable you are,” she said.

But she has felt nothing but love and sympathy from friends, colleagues and even strangers in the aftermath of the accident.

“So many people, people I don’t even know have been coming up to me and saying they are so sorry. It’s so beautiful and typical of Samoan hospitality and that is the Samoa I know and love, that is why I keep coming back,” she said. 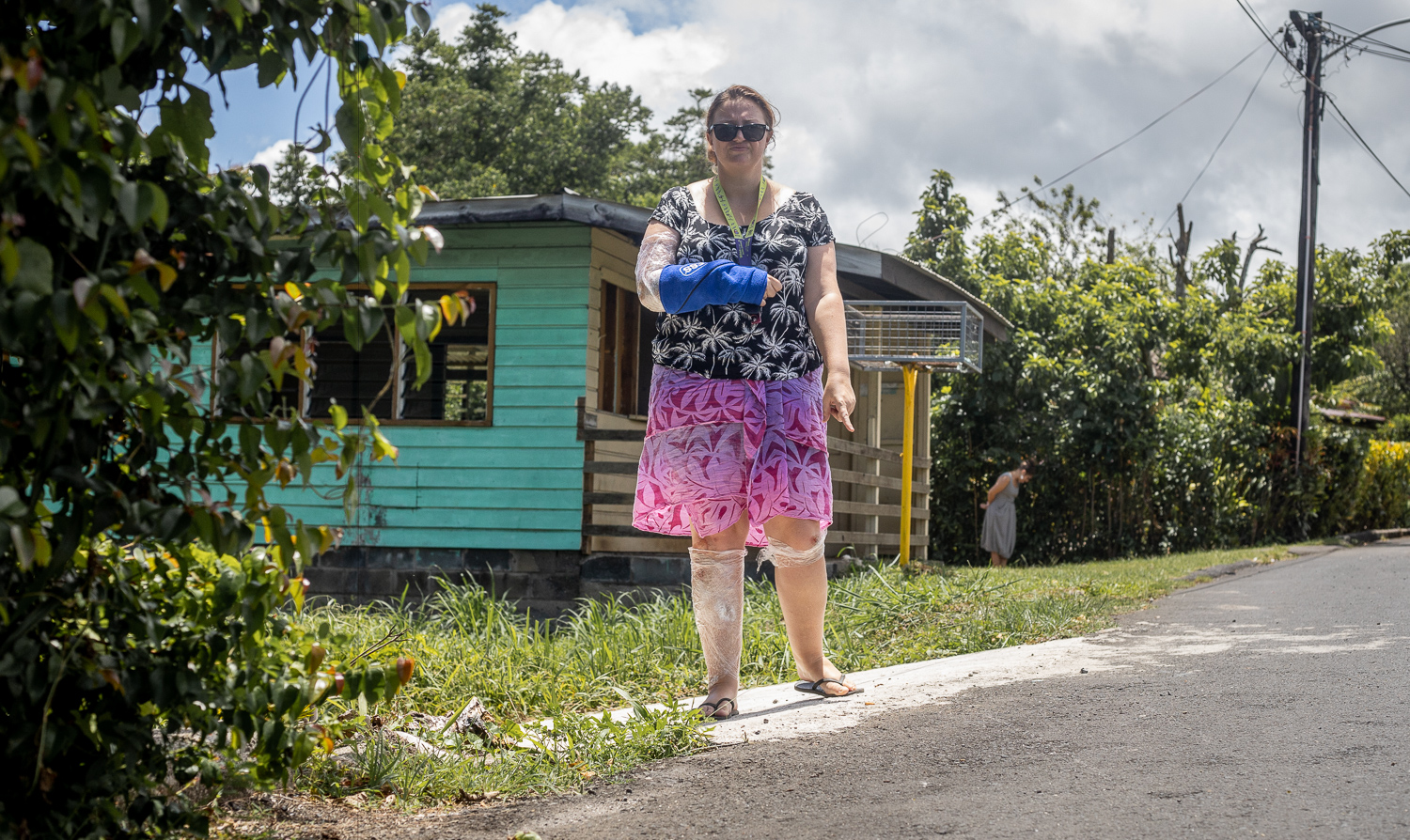 But knowing how heavily overcapacity the health system is, Ms. Carroll was devastated to find herself taking up room in the hospital.

“I was a bit embarrassed to go and ask for help when I am supposed to be helping them,” she admitted.

“The first rule of volunteering is to not be a burden.”

Ms. Carroll is a nurse who dispenses vaccines in Queensland. She said one of the benefits of having a vaccination clinic in the Samoa Tourism Fale is how much her team have been able to educate passers-by on immunisation, measles and even dispel some misinformation they may have read online.

With the clinic behind the National Library so close to the Samoa Tourism Fale, her clinic has not been especially busy with vaccinations, so the team has time for valuable conversations, she said.

“It’s been quite valuable for me to explain to them what is going on because a lot of people have a lot of questions.

“We have been able to impart some really good information because there is a lot of false information going out there on the internet.”

The first days of the State of Emergency were busy for all the clinics and now numbers have dropped somewhat. The Ministry of Health report 24,000 people have so far been vaccinated under the mass vaccination campaign.

Ms. Carroll said that about covers everyone who cares about being vaccinated, and now the challenge will be reaching those who do not.

“When you are seeing lots of mixed messages and anti-vaxx rhetoric coming through, it’s really frustrating, especially when they are people who are overseas, not here, spreading false information.”