The second round of Europe’s top club rugby competitions kicked off on Saturday morning local time, with Samoans dotted around the English, French, Italian and Welsh clubs competing.

21-year-old Jacob Umaga, the son of former Manu Samoa back Mike, put forth a man-of-the-match performance in his European debut for Wasps on Sunday morning.

The England Under-20 international scored 12 of their 32 points from first five, before being replaced by former All Black Lima Sopoaga for the final 15 minutes.

Manu Samoa outside back Jamie-Jerry Taulagi didn't feature for Agen, although they did start Jordan Puletua at centre.

The Pat Lam-coached Bristol Bears continued their unbeaten start to European competition this season by running out to a 24-point lead in about as many minutes away at Brive on Saturday morning.

The former Manu Samoa number eight elected not to play current Samoan internationals Chris Vui and James Lay, though former Under-20 player and All Black Steven Luatua skippered the side with a man-of-the-match performance at blindside flanker.

Outside back Alapati Leiua injured his knee in Bristol’s first game of the season having just returned from the Rugby World Cup, but Lam told Bristol Live ahead of the Brive he is not far off a comeback.

"He should be in line and available for selection next week,” the coach said.

On the other side, former Manu prop James Johnston started for Brive, along with former Samoa U20 loose forward So’otala Fa’aso’o. 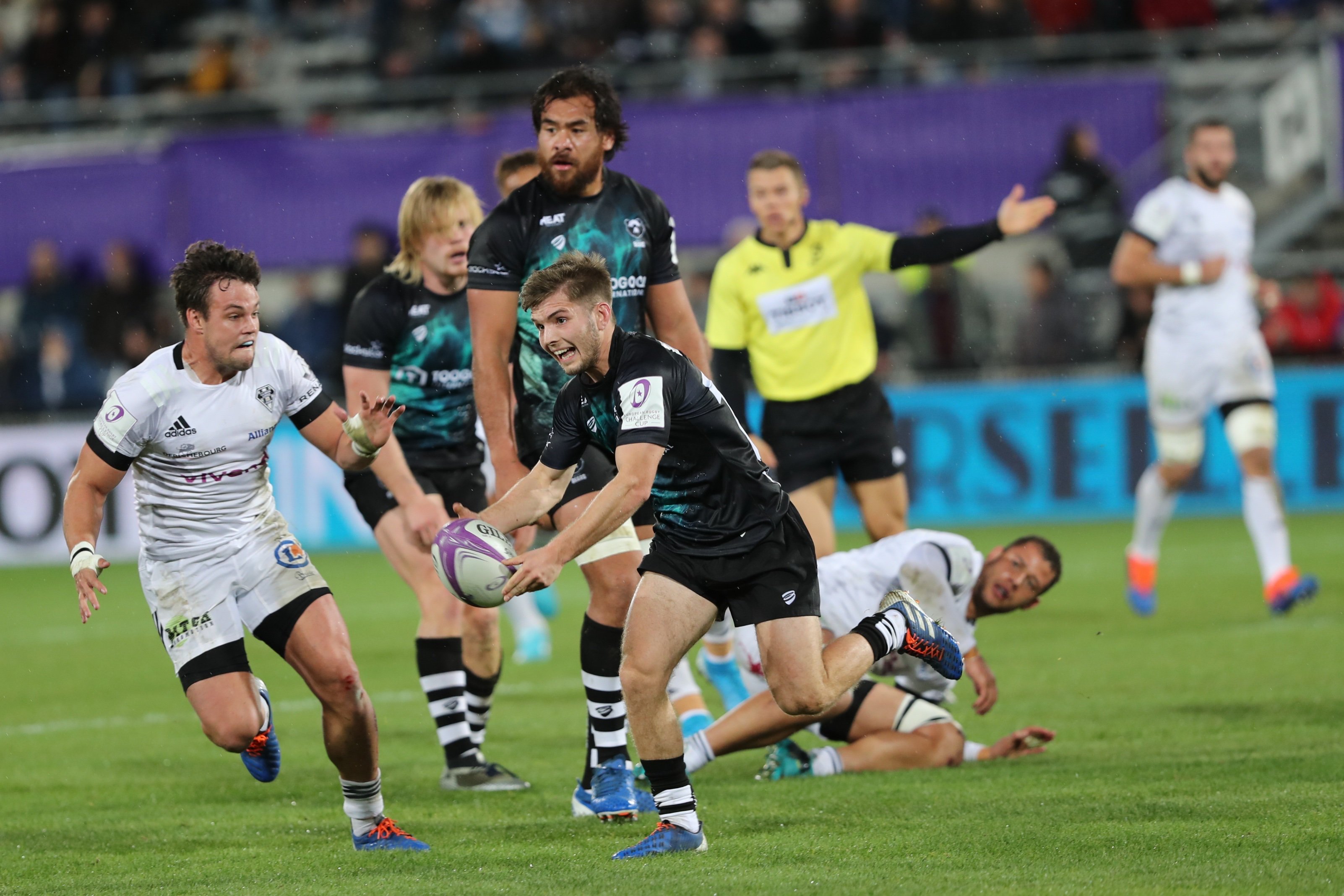 Former Samoa U20 flanker Giovanni Habel-Kuffner came off the bench for Pau at halftime with his side already enjoying a commanding 35-3 lead.

Manu Samoa’s Ulupano Seuteni started at second five for Bordeaux as they came back to draw even with Edinburgh right on fulltime on Saturday morning.

The result means the French club stay unbeaten in Europe, while currently holding second place in the domestic Top 14 table.

That success comes in spite of the continued absence of Manu number eight Afaesetiti Amosa, whose knee injury at the World Cup will keep him out of rugby for another six or seven months.

Manu Samoa midfielder Kieron Fonotia started at second five for Scarlets who went down to hosts Toulon on Saturday morning by a point thanks to a try in stoppage time.

Scarlets went down to 14 men just before halftime with a red card, but managed to hold the lead right to the end before faltering.

Former England man Ben Te’o started at centre for the French club, though he has been recently linked with a move to fellow Samoan Sonny Bill Williams’ Toronto Wolfpack in rugby league, where he could represent Toa Samoa once again.

Alex Tulou started at number eight for the hosts, but there was no room for either of the internationally uncapped Worcester pair of outside back Melani Nanai and lock Michael Fatialofa.

Manu Samoa prop Nephi Leatigaga came off the bench and forced the match-winning penalty for Leicester in the 80th minute by getting over the ball at the breakdown.

Manu centre Rey Lee-Lo and Nick Williams both started for the Welsh hosts, but Manu Tuilagi and Jordan Taufua were both rested by Leicester for the Sunday morning match.

Irish got the win without the absent Manu pair of hooker Motu Matu'u and loose forward TJ Ioane.

Manu Samoa prop Paul Alo-Emile started at tighthead as his Stade Francais held on for a win over Zebre on Sunday morning.

Manu Samoa back Tim Nanai-Williams remains sidelined with injury as his Clermont club lost to Ulster in Northern Ireland on Saturday morning.

Manu Samoa outside back Ah See Tuala got his first start of season at fullback for Northampton, and made the final pass to Tom Collins for their team’s first try on Sunday morning.

Treviso wing Monty Ioane (nephew of former Wallaby Digby) had a try ruled out by the TMO for a foot in touch.

Former Wallaby Will Skelton and current USA Eagle Titi Lamositele both started in Saracens tight five during their big win on Sunday morning.

Scottish international Sean Maitland was missing for the defending champions, who are 26-points back at the bottom of the English Premiership after being deducted 35 points for a salary cap breach.

Former All Black Jerome Kaino scored a try in a man-of-the-match performance for Toulouse on Sunday morning.

He started at number eight along with fellow former All Black Charlie Faumuina and former Manu Samoa lock Joe Tekori who was playing his 50th Champions Cup match.

Pita Ahki came off bench to score Toulouse's bonus point try with the last play of the game against his old Irish club, who did not field Ireland international Bundee Aki.

Former All Black Rudi Wulf got 12 minutes off the bench for Lyon on Sunday morning as they went down to Irish club Leinster.

Manu Samoa hooker Elia Elia started for Harlequins who had to finish the game without him when he picked up a yellow card for a no arms tackle with four minutes left.

Former England wing Denny Solomona started for Sale as they ran out winners over La Rochelle on Monday morning.

Former All Black Victor Vito captained the French side, who went down to 14 men when Pierre Bourgarit was red-carded for an eye gouge in the first half.

“It’s pretty obvious that any time there’s a hand to the face – whether it’s a grazing or an actual jab – it’s not good enough,” Vito told Robert Kitson of the Guardian.

“We’ll have to look at that. If you want to be a real contender in Europe you’ve got to be a lot more efficient and we just weren’t.”

Former Manu Samoa halfback Kahn Fotuali'i was not selected by the French club.