The shipment of Panadols confiscated in American Samoa. (Photo: Supplied )

American Samoa authorities have seized 10 cases of over-the-counter medication that were imported into the American territory from Samoa.

The boxes of panadol were shipped to the American territory on the inter island vessel Lady Naomi, and were immediately impounded as the local authorities said the medication was not approved by the U.S. Food and Drug Administration (F.D.A.).

The American Samoa government’s Director of Health, Motusa Tuileama Nua, confirmed that their Ministry of Health seized 10 cartoons of panadol that were shipped to the territory from Samoa.

“This is illegal we can only allow medication that is imported from America which is F.D.A. approval,” he said in an interview with the Samoa Observer. “And once we turn a blind eye to these things, I will open a floodgate for all Asians to bring in these over-the-counter medication which is not allowed in the territory.”

The shipment of the painkillers was allegedly organised by a local business in the American territory, according to the health official.

“The Asian business owners will be brought in for questioning. We are trying to get to the bottom of this in trying to determine what the intention behind this shipment is.” 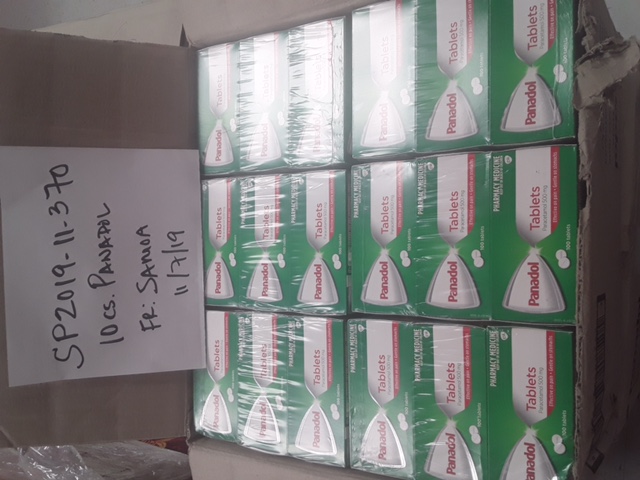 Motusa appealed to Samoans to stop sending such medication to American Samoa as they cannot be accepted unless they had F.D.A.-approval.

“They should come here to take back their medication (as) these things (panadol) are not allowed in our territory,” he said.

Unless the pharmaceutical products have the F.D.A. stamp of approval, Motusa said they will be accepted, otherwise they cannot be sold in the territory.

American Samoa’s Director of Agriculture, Filifaatali Mike Fuiava, said that under the American Samoa Quarantine Act any pharmaceutical products without labels are considered illegal. His Ministry oversees the quarantine division stationed at the border.

According to a local pharmacy, one case of panadol cost close to $700 tala which would put the total cost of the 10 cases shipped to American Samoa at approximately $7,000.