Both the Manu Samoa and Manusina 7s will get a chance to play for a spot in the Olympics on Day Three of the Oceania Sevens, after dominant performances on Friday.

The Manu won both their Day Two matches convincingly; 47-0 over Tuvalu then 41-0 over the Cook Islands to finish top of Pool C.

They will face off against Australia at 6:36 pm Samoan time on Saturday to determine who represents Oceania at Tokyo 2020.

The Manu 7s went straight onto the attack in their win over the Cook Islands, with Paulo Scanlan scoring two tries in the first two minutes.

Elisapeta Alofipo scored two himself to make it 26-0 at halftime, as Samoa dictated the game by controlling the kickoffs.

Scanlan dotted down for his hattrick early in the second half, and the Cook Islands one foray inside Samoa’s 22 metre line was over before it began thanks to a knockon.

In fact, the Manu Samoa 7s went and scored on the other end - Tofatuimoana Solia getting on the end of a flowing counterattack.

Scanlan had his fourth just before the match ended after a nice run from John Vaili. 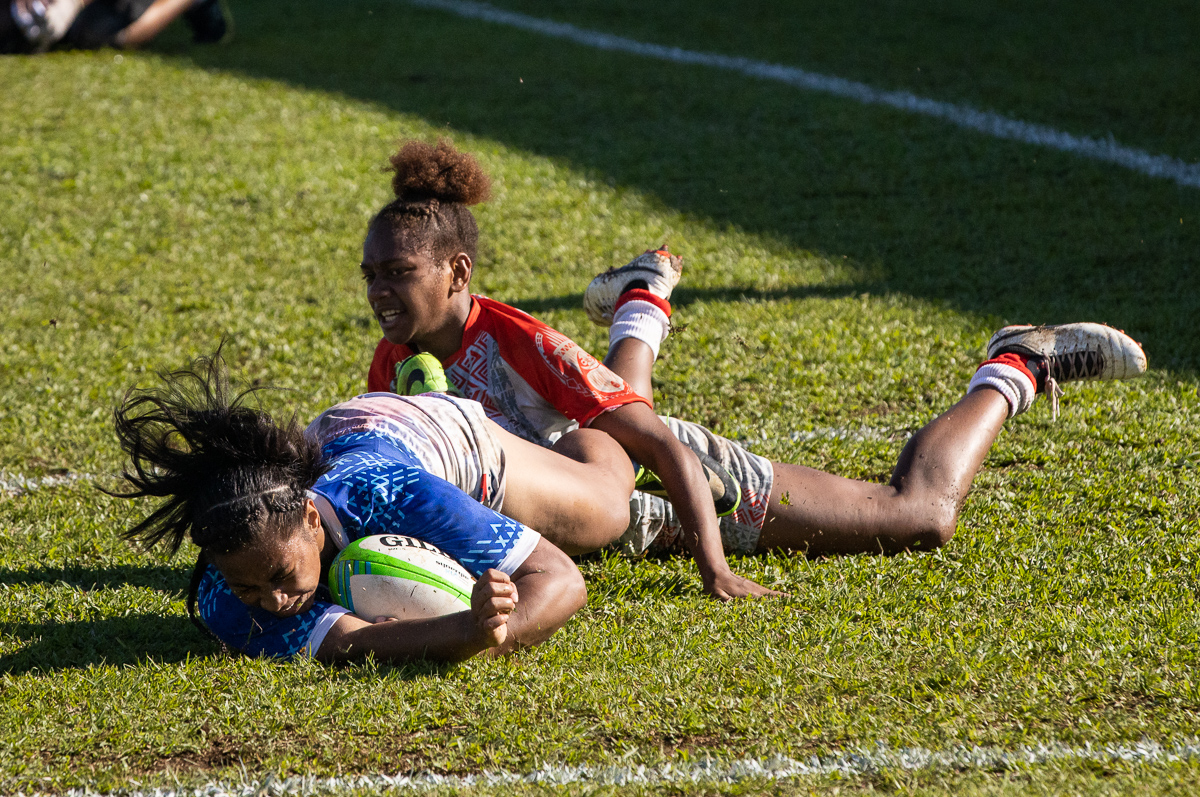 Earlier he had opened the scoring in the Tuvalu game as well, receiving a kick and evading a tackle before speeding to the line.

Tofatuimoana Solia was next on the board, showing his strength to crash through two defenders over the tryline and make it 12-0 inside five minutes.

Tuvalu only made it over halfway once in the first half, and immediately knocked on after doing so.

Uaina Sione got two tries before halftime to make it 26-0 at the break.

There was a hiccup to start the second for Samoa, as captain Tomasi Alosio made a mess of the kickoff receive then knocked on in a tackle inside his own five metre line.

Tuvalu should have had their first try, but knocked on in the act of scoring.

Elisapeta Alofipo showed his considerable pace to get Samoa’s fifth try in the 11th minute, then Uaina Sione scored to make it 40-0.

Laaloi Leilua made a steal at the breakdown then handed off to fellow substitute Kerisimasi Savaiinaea to cap the win with a seventh try.

Meanwhile, The Manusina 7s have come second in Pool C of the women’s division with two wins from three.

They defeated Tonga 43-0 on in their first game on Friday, but lost 17-10 to Papua New Guinea, and will face tournament favourites Fiji in the Olympic qualifying semifinal at 2:12 pm on Saturday Samoan time.

Papua New Guinea opened the scoring inside 30 seconds, with Fatima Rama proving too quick around the outside for the Manusina 7s.

That pace manifested itself on defence as well, with the Palais able to throw Samoa off with good line speed.

They put pressure on a Manusina 7s scrum and scooped up some loose ball, with Alice Alois running away to make it 12-0 with a try in the corner.

Saelua Seleti did manage to claw one back for Samoa just before halftime to keep her side in the contest.

The game was tight through the opening minutes of the second half, but Seleti received a yellow card for what appeared to be dissent after conceding a penalty, and Cathy Puro grabbed PNG’s third try with three minutes left.

Winger Apaau Mailau made a break and looked to be run down by Fatima Rama, but the Samoan managed to spin out of the tackle and head in for a try with the penultimate play of the game.

The Manusina 7s had their chance after a couple of penalties gave them attacking possession, but it was all for nought as the Palais held on.

Earlier, they had beaten Tonga 43-0 with their defence and the ability to counter quickly, which they showcased right from the opening whistle.

Captain Masuisuimatamaalii Pauaraisa won a penalty for holding on at the breakdown which she took quickly, and a nice skip pass from Alafou Fatu found Apaau Mailau for her first try of the game.

The Utahn had her second a couple minutes later to make it 12-0, and soon completed a hattrick of tries after a good run across the defence and through a gap.

Victoria Lauina grabbed the Manusina 7s’ fourth try on halftime to make it 26-0.

Mailau wasn’t done though, and opened the second half with the best try of the game.

She skilfully evaded half the Tongan team with a 50 metre run down the sideline, ending any hope of a comeback.

Tonga then picked up a couple of yellow cards for a high tackle and a hair pull, and Vaimalo Manuo took advantage of the extra space to get on the scoresheet with a couple of minutes left.

Substitute wing Lupe Hunt completed the rout with a try after the siren had gone.

Samoa’s deaf men’s sevens team won their second game of the tournament 12-7 over Fiji Naiula having drawn their opener yesterday.

Halfback Lui scored Samoa’s first try as the halftime siren went to earn his side a five point lead at the break.

Ionatana Tofa got his second try of the tournament to make it 12, and while the Naiula scored with three minutes left, they couldn’t catch Samoa.

The win leaves Samoa undefeated with one game remaining in the round robin (against Fiji Kiakoro at 11 am Saturday Samoan time), and in good shape to make the final on Saturday night.