The censure is contained in a letter from the Prime Minister to the Regulator with regards to her handling of the complaints from the local TV stations about the monthly tariff they have been asked to pay to use the recently launched Digital TV platform.

The letter, written in Samoan, details the Prime Minister’s anger about a press release issued by Lefaoali’i’s Office “on Broadcasting Tariffs for Digital TV.”

“I have seen your press release,” a translation of Tuilaepa’s letter reads.

“In the meeting we had (which the Regulator did not attend), I had instructed you all to talk again. To me, the margin of profit for the Digital TV is high.”

Tuilaepa told the Regulator “you do not understand the issues I am raising.”

“What I meant in my instructions is that you are to report back to me before any decision is made,” the Prime Minister wrote.

Questions seeking a response from the Regulator were sent to her email. An automated response said that she is on “duty travel from 25th October to 18th November.”

The letter from the Prime Minister is the latest development in the controversy over a $35,759 monthly tariff local broadcasters have been asked to pay. The tariff was set by the O.O.T.R. which had advised local television stations of the cost.

In response to the imposed tariff, some mainstream television stations have raised concerns that the cost could put them out of business.

In a separate letter dated 7 October 2019, Prime Minister wrote to the Minister of M.C.I.T., Afamasaga raising the alarm that the cost is too high and could “kill” the stations.

"Consider the complaint about the monthly tariff of $37,759 to be paid by one TV station," Prime Minister Tuilaepa wrote to Minister Afamasaga.

"What is your response to this curse? The digital [T.V.] was established to assist the people and yet it appears it will kill the television stations which have served (Samoa) for a long time."

The Samoa Observer had published a story titled “Digital TV tariff could "kill" local stations, P.M. tells Minister” based on the letter.

In response, the Office of the Regulator issued a lengthy press statement which appears to have angered Prime Minister Tuilaepa.

“For the broadcasters to insist on lowering the tariff that O.O.T.R. sets as mandated by Law is disrespectful,” the statement from the Regulator said.

“We are only doing the work that is required of us by implementing it based on the right interpretation of the law passed in Parliament.

“The P.M’s remark ‘mala paga’ is considered a sympathy statement for those who present grievances to him, it is his prerogative as a leader to show compassion and therefore these jargons are taken to be motivational statements to find solutions that would appease parties; but in some circumstances when process and proper consideration has been done there is nothing else to offer but clarification.”

The Regulator added, irrespective of the translation of ‘curse’, “if one is to consider and truly reflect on the hard work people put into this Project, the journey taken to get this far, it would show that this project is too blessed beyond the curse”. 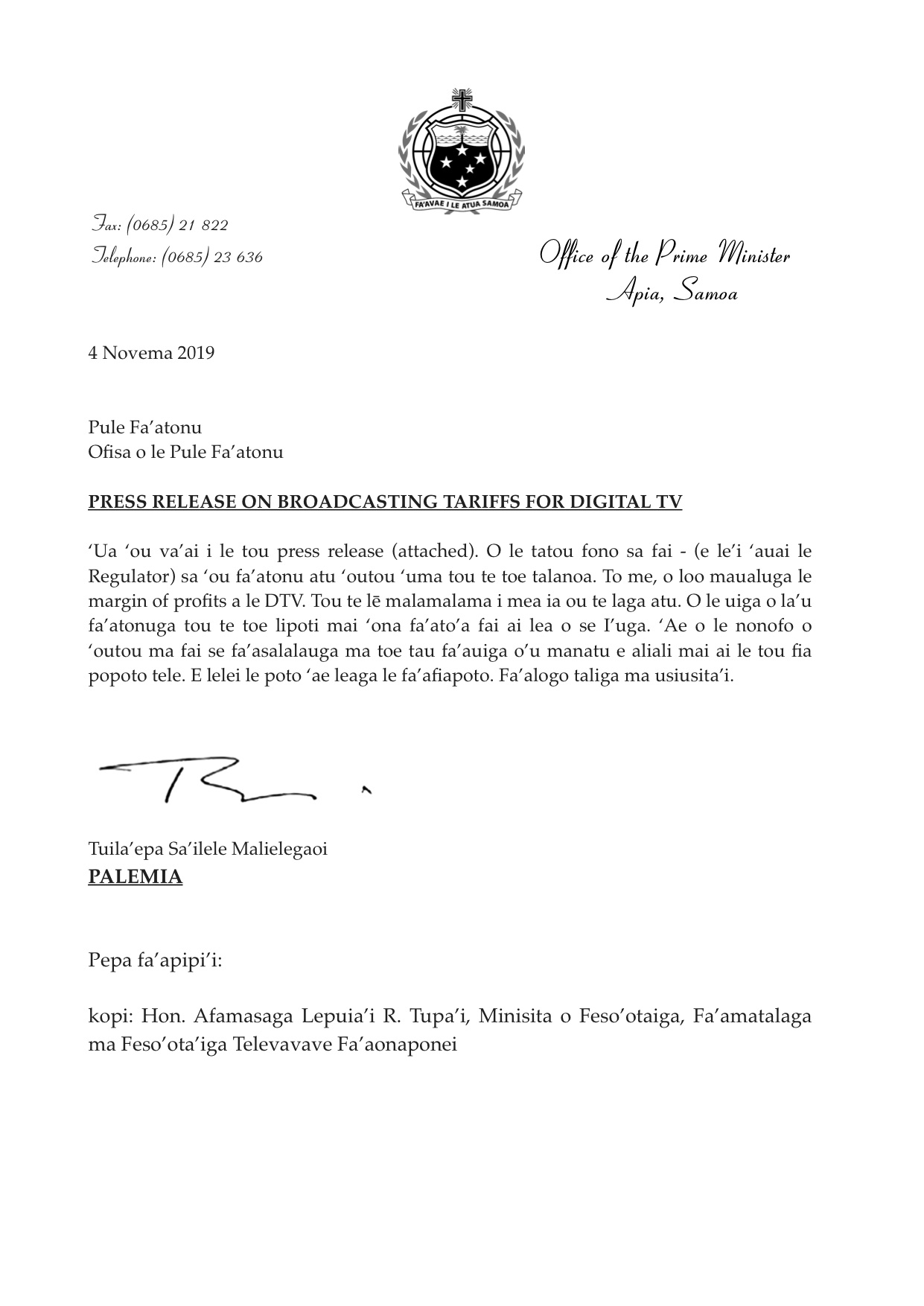 The following is a translation of Tuilaepa’s letter to the Regulator:

Office of the Regulator

I have seen your press release (attached). In the meeting we had (the Regulator did not attend) I had instructed you all to talk again.

To me, the margin of profit for the Digital TV is high. You do not understand the issues I am raising.

What I meant in my instructions is that you are to report back to me before any decision is made.