Samoa
Samoa's Bahai community of around 6000 (including those in American Samoa) were the first to celebrate the 200th birthday of the Bab, the founder of their religion. (Photo: Aufa'i Areta Areta)

Samoa’s Baha’i Temple in Tiapapata, one of just eight like it in the world, was flooded with the faithful and the curious on Tuesday evening for the 200th birthday celebrations of its spiritual founder, the Báb.

The National Spiritual Assembly of the Baha'i of Samoa Inc. hosted a devotional service led by young and old members of the community, each taking turns at the podium to guide their congregation in praise.

The devotional service, in a fashion typical for a religion founded on the precept of the oneness of humanity, included excerpts from not only their own leaders, the Báb and Bahá’u’lláh, but also the New Testament, with a reading of Isaiah 2 2:4: “Nation will not take up sword against nation, nor will they train for war anymore.”

Samoa, as the first country to see the sun-led celebrations for the bicentenary held all over the world, including in Russia, Cameroon, Papua New Guinea, Vanuatu and Chile, to name a few. 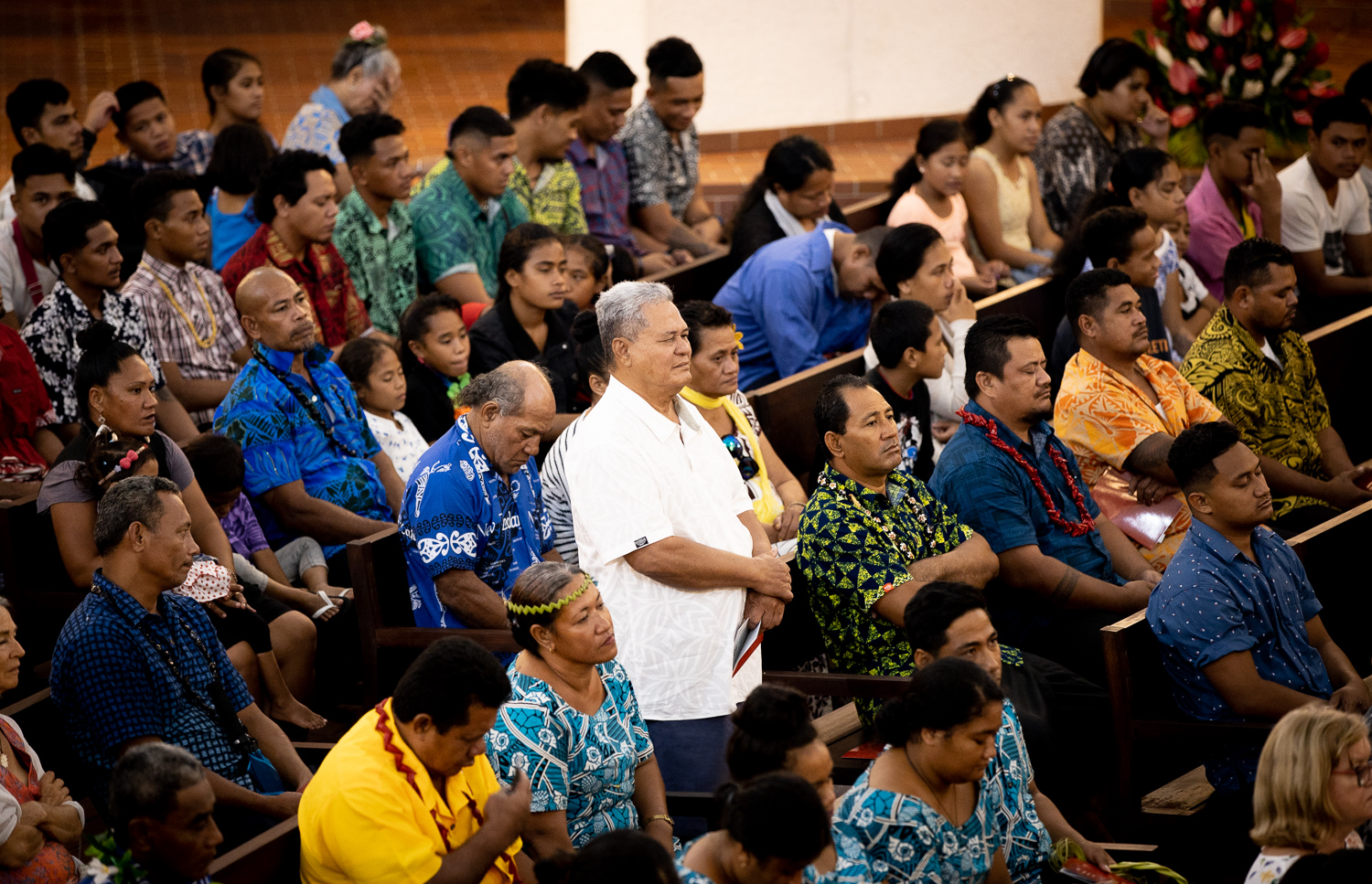 After the devotion, the near 300-strong congregation moved to the large marquees installed at the top of the hill, where the celebrations would continue and refreshments served. The carefully maintained backdrop is a reflection of the faith’s belief in beautiful surroundings being conducive to worship.

Acting Prime Minister, Papali'i Niko Lee Hang, said it was a privilege to celebrate the occasion.

"Two hundred years of existence is a long, long time," he said.

Papali'i also represented the Prime Minister and Cabinet at the 200th birthday celebrations of the Bahá’u’lláh two years ago at Taumeasina Island Resort.

He said the Baha'i, like the many different other religions in Samoa, believe in the same God, but perhaps honour them slightly differently. 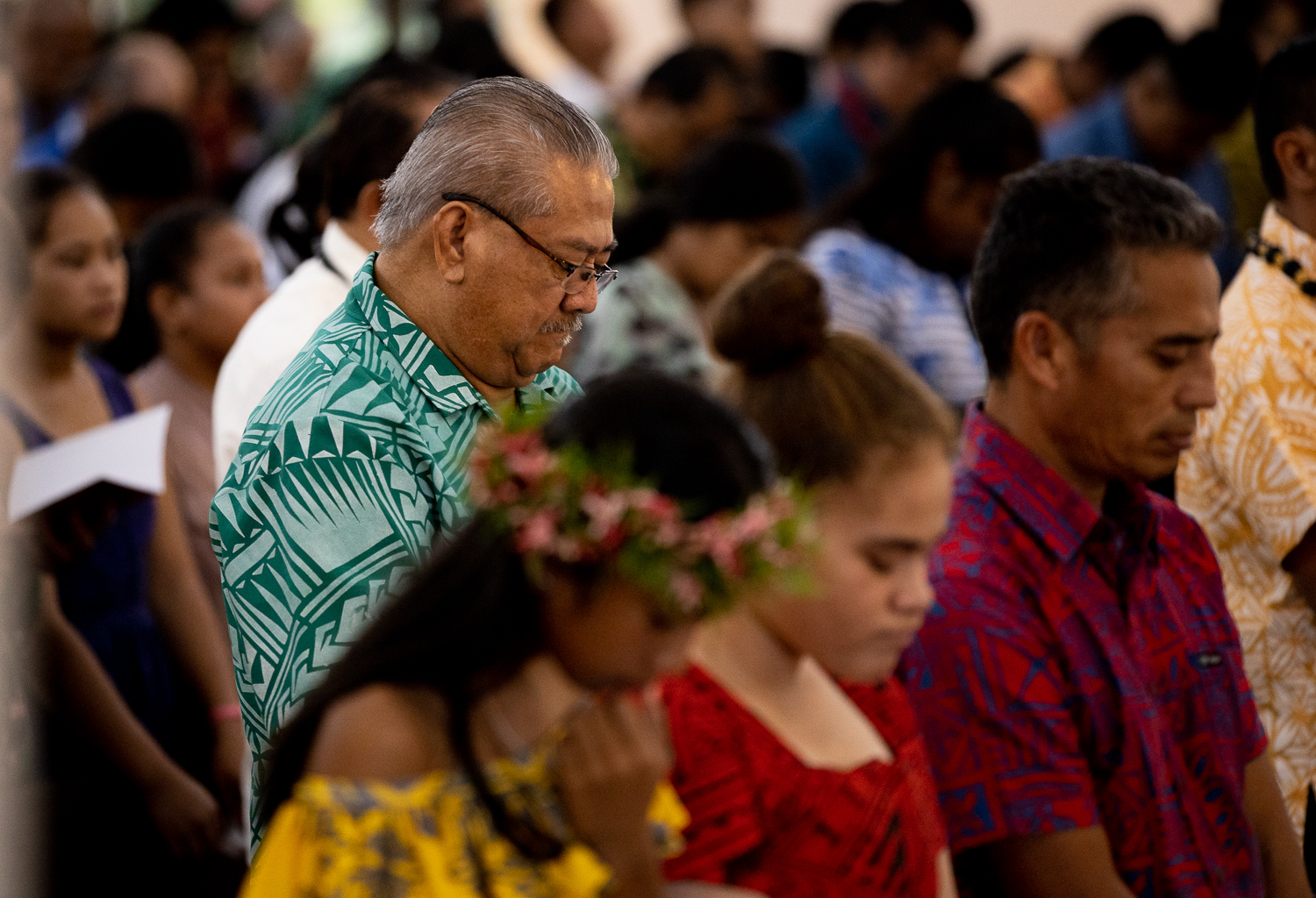 The Baha’i faith incorporates different religions into one. This is best exemplified by the gold inscriptions surrounding the congregation, etched into the nine sides of the temple walls.

“All the prophets of God proclaim the same faith,” one reads.“So powerful is the light of unity that it can illuminate the whole world.”

Elisaia Leu, a member of the community and organiser of the bicentenary said it was a hard job, but he is glad to be a part of it all.

"This is a once in a lifetime celebration," he said.

Mr. Leu joined the Baha'i faith in 2000, converting from Christianity. He said his friend told him about the faith and he was initially reticent to learn about it.

"Later I found out there is nothing wrong with the Baha'i faith, this is where everyone should be at the moment."

He describes the Báb as similar to John the Baptist, who prepared the way for Jesus Christ to arrive.

To Mr. Leu, the only difference is that the Báb was a "manifestation of God." 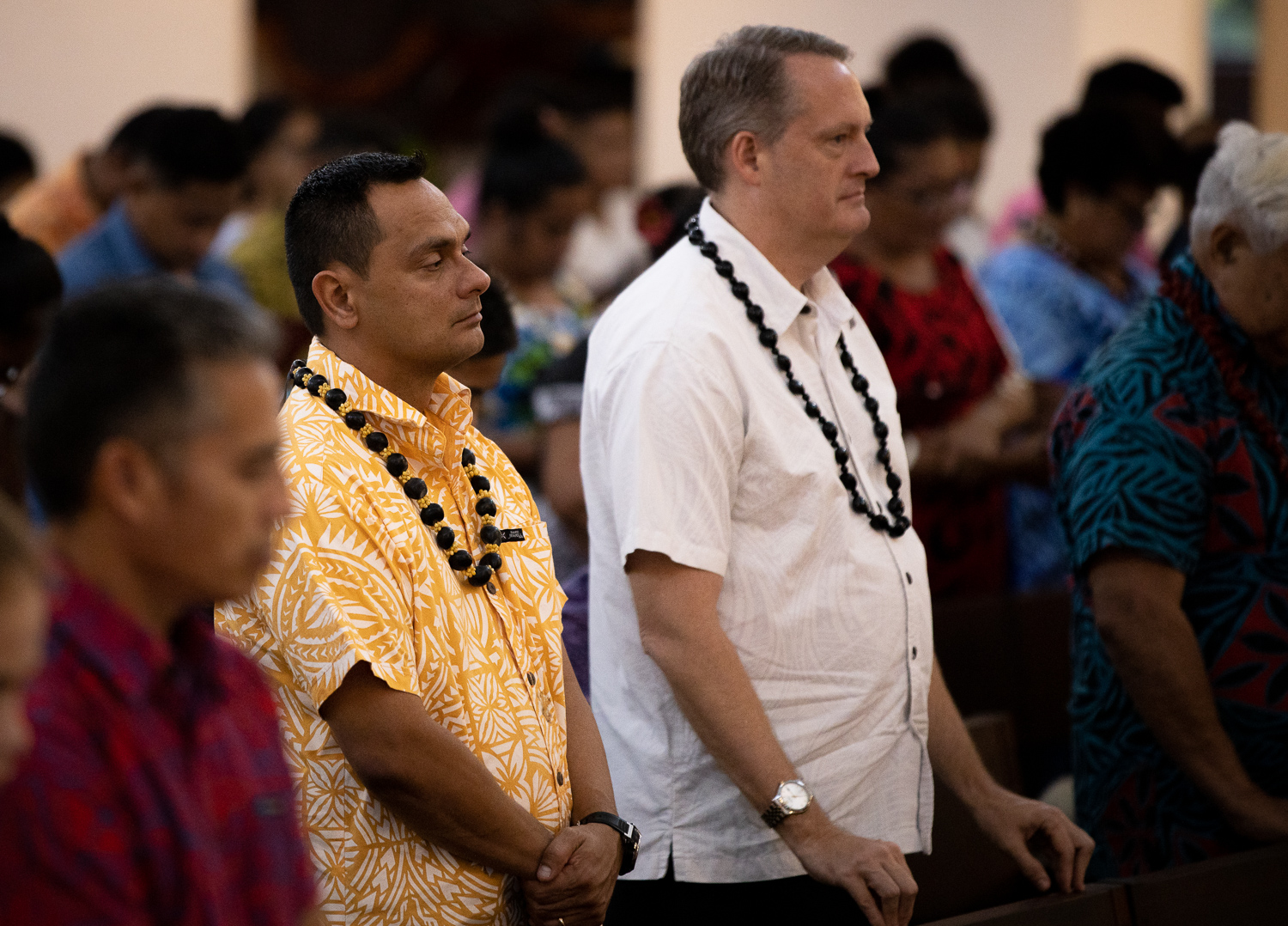 The events are being broadcast to a specially established bicentenary website.

A new documentary about the faith, “Dawn of the Light” was commissioned for the occasion, which meets individuals on their own journeys to truth and meaning in the Baha’i world. It has been translated into ten languages.

Its headquarters are called the Universal House of Justice, and is based in Haifa, Israel. On the occasion of the bicentenary, it published a message to its congregants, which was read out for the Samoan community.

The message speaks of the “educators” which every religion awaits with great anticipation, and how their arrival “propels the advancement of civilisation.

“No wonder, then, that the coming of the Báb, Whose Birth two centuries ago we now honour, gave rise to unprecedented ferment in the country where He was born.

“The moment of His appearance, like the appearance of all such Figures, precipitated the release of powerful spiritual forces—but there was no accompanying spectacle.

“There was instead a late evening conversation, in a modest Persian dwelling, between a student of religion and his youthful Host, during which that Host revealed that He was the Promised One, the divine Educator His guest had been seeking.” 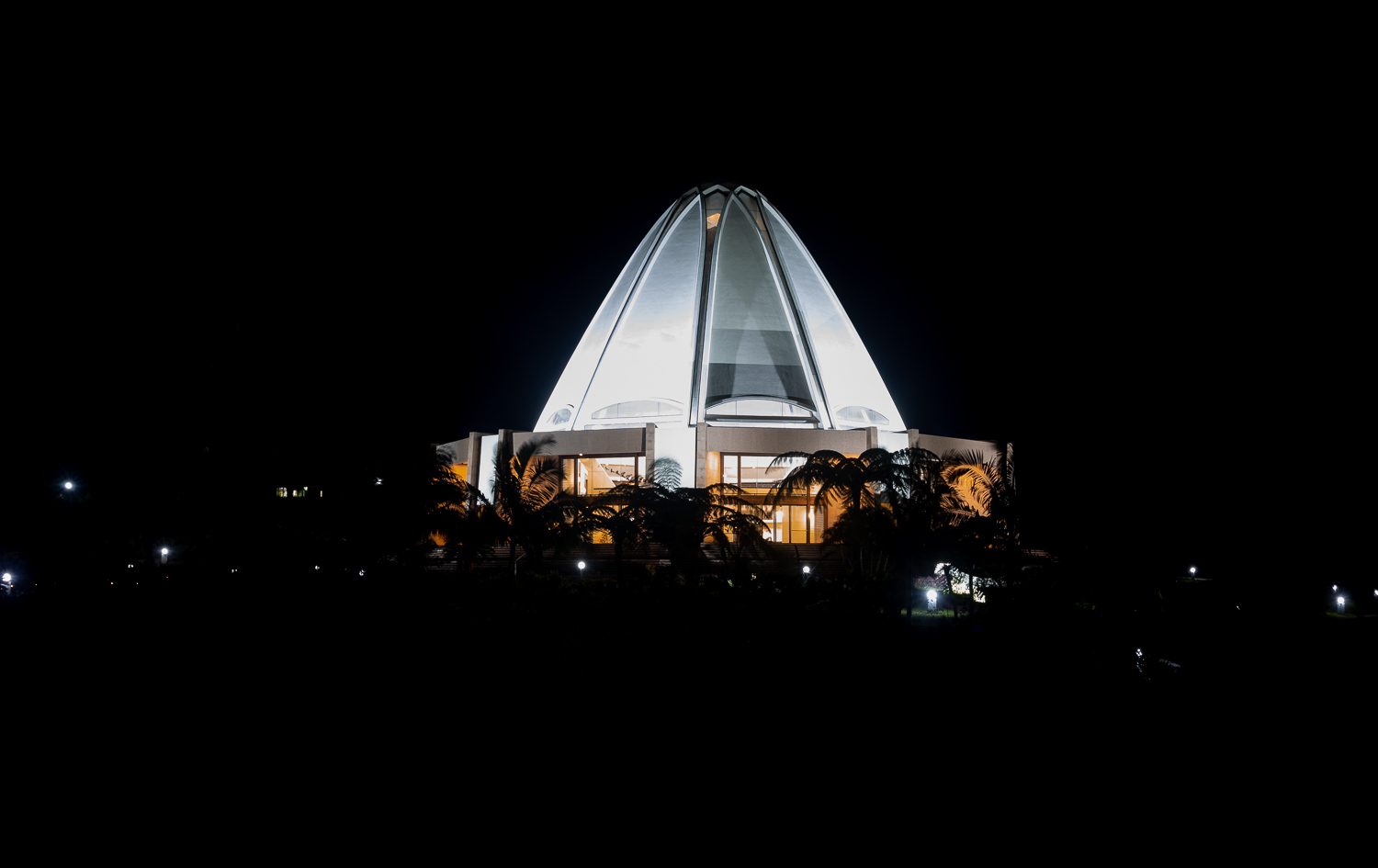 According to the stories of the Baha’i faith, founders the Bab was born in 1819 in Iran. He taught that God would send another prophet, in the form of an Iranian who took the title Baha’u’llah born two years earlier in 1817.

The Islamic clergy in Iran rejected these new teachings, and for their beliefs, the Bab was executed, and Baha’u’llah was banished to live in exile, and died in 1892.

The two left a legacy behind them in the form of a new religious order dedicated to unity and equality of all people, which has now spread to most of the world’s countries and is said to have between five and eight million followers.

Samoa’s own Baha’i community was started in 1954 by Baha’is from Australia travelling to the islands in 1920 and one of its first converts was the former Head of State Maelietoa Tanumafili II.

The temple was dedicated in 1984, and took five years to build. 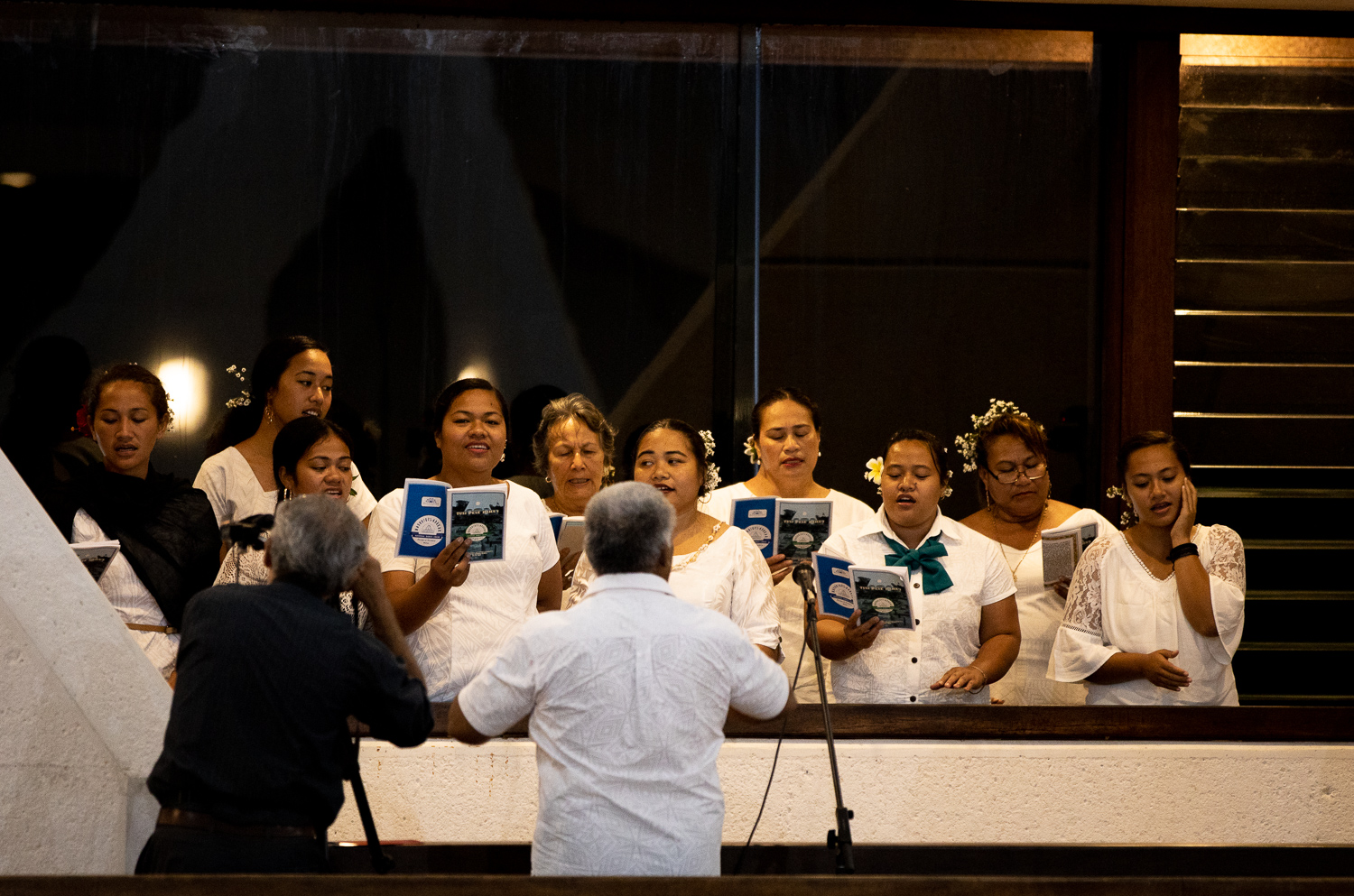 Today, the community is around 600 strong across the 26 communities of Samoa and American Samoa (including six in Savaii).

One of the key tenets of the religion is that all the world’s religions fundamentally want the same things, but get there through different practices. At the heart of the faith is a unified world order that makes the world more prosperous for everyone.

Since the execution and exile of its founding leaders, the Baha’i people have been persecuted for their faith by Islamic leaders who do not recognise the religion.

More than 200 Baha’i were executed between 1978 and 1998 in Iran and Egypt, and several Islamic countries restricted their Baha’i citizen’s rights, by firing them from their jobs, denying their pensions and rights to an inheritance.

For nearly 20 years, Baha’i in Egypt were excluded from having identification cards because the only religion options allowed were Muslim, Christian or Jewish. That made it impossible to get birth, death and marriage certificates or passports, become gainfully employed, treated in a hospital or even vote.

It would not be until 2009 that the first ID cards for Baha’i were issued after a lengthy legal case in the Egytian Supreme Administrative Court.

As recently as 2018, students were expelled from Iranian universities for their faith. 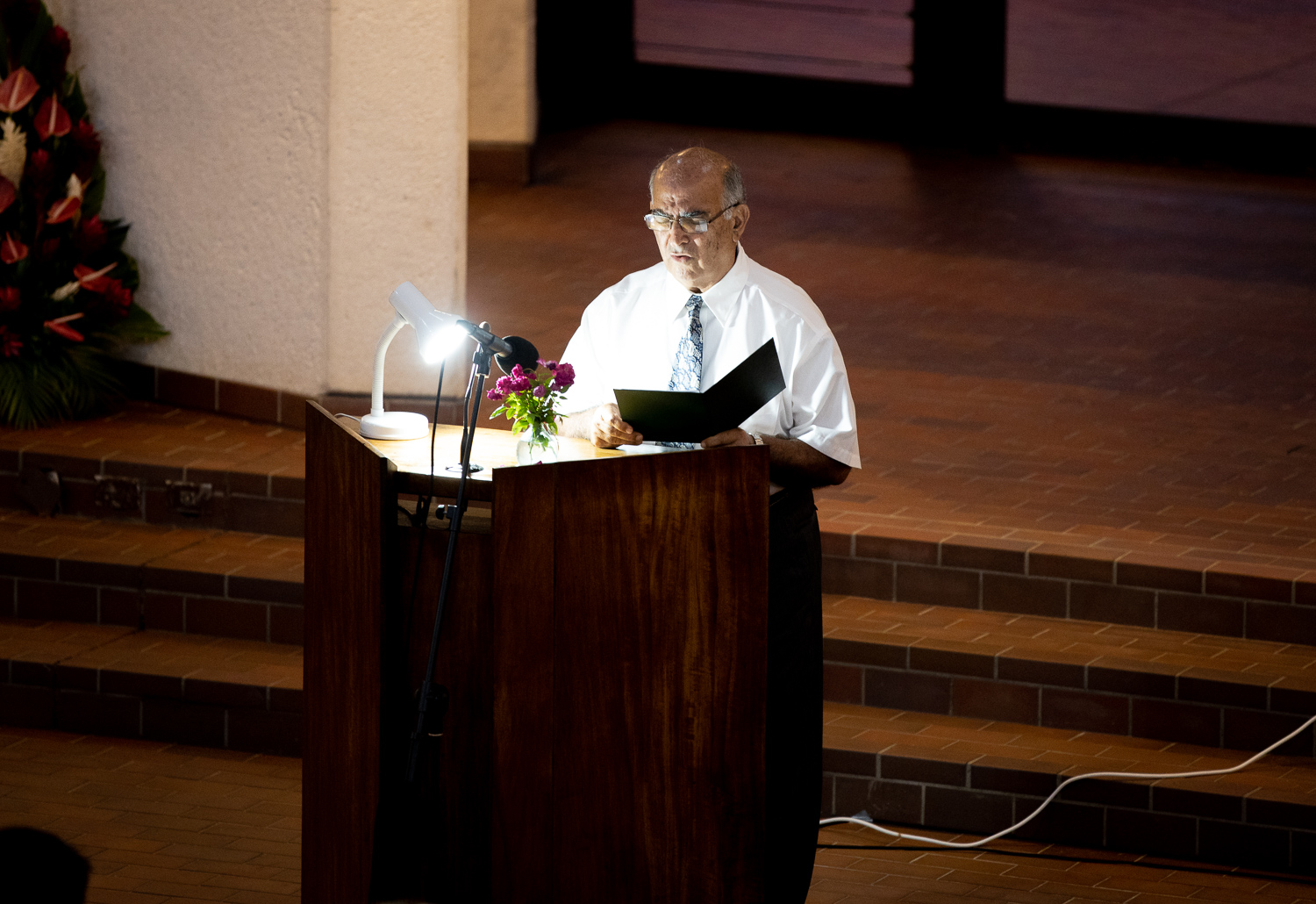 In their celebratory message, the leaders of today’s Baha’i faithful instructed their flock to remain committed to the teachings of the Bahá’u’lláh, whose cause is to be the “wellspring of enduring justice and peace—not for one place or one people, but for all places and all peoples.

“Let everyone who is awake to the condition of the world, and to the persistent evils that warp the lives of its inhabitants, heed Bahá’u’lláh’s call to selfless and steadfast service—heroism for the present age.

“What else will rescue the world but the efforts of countless souls who each make the welfare of humanity their principal, their dominating concern?”