Last week, Skyline broke ground on a $30 million processing factory and research facility in Tanumalala. They expect to be exporting 25 containers of nonu juice alone to China a month when the factory is finished.

“I think it is very positive for the nonu industry and for the other products they are going to be exporting,” he said.

“To have a company build such a large and state of the art factory is positive and will provide jobs for our people and help obviously with export revenue.

“I personally want to thank and congratulate Tapusalaia Terry Toomata, our Ambassador in China for his never ending hard work in trying to help our industry and other agricultural products get into the Chinese market.”

At the ground-breaking ceremony for the new factory, Minister of Commerce, Industry and Labour Lautafi Fio Purcell said Samoa’s small local exporters may want to consider joining to compete in the marketplace.

“They don’t want to put their money together and build bigger, they want to go at it alone in small pieces, and they don’t get anywhere.”

But Mr. Vui said he is wary of having a monopoly in the industry, and that competitiveness is important to ensure there is no price fixing, and that farmers have opportunities to sell to the highest buyer.

“Personally I do not see the other companies merging…  it could possibly happen, it has happened in the past.”

If Skyline’s volume of 25 containers (20 foot ones, at that) is to be met, farmers, and nonu-growing villagers will need to plant more fruit trees.

Most nonu collected for exported is not from commercial farms, but rather the wild nonu that grows across the country, Mr. Vui said.

But even the exporters, as well as Nonu Samoa, have begun planting commercially and distributing seedlings to families to help them grow their crops. Skyline itself has a 100 acre nonu farm near its new factory plot.

“There are never any guarantees in business, and we don’t know how long the upsurge in nonu sales will last and we do not guarantee anything,” Mr. Vui added.

“However I would advise farmers to plant nonu, or more nonu, around their farms.”

Not ones to sit idly while their farms burned, Hawaiian buyers came to Samoa to maintain sales overseas. Mr. Vui said there was a period where it was hard for local buyers to get nonu while demand was so high.

Nonu juice is a high-end boutique product in Asian and American markets, and sells for upwards of US$60 per litre.

Mr. Vui said in the last 21 years, his company has purchased more than T$22 million worth of nonu from farmers and villagers.

“Nonu Samoa Enterprises will continue to work closely with Samoan nonu farmers and village suppliers to fill our orders, and thank them for their support in the past and future.

“It is very important for the nonu manufacturers not to forget our farmers and villagers as they have been with us since day one.”

Around the world, there is no shortage of nonu exporters, meaning Samoa must maintain the quality it delivers or suffer the risk of being cut from the supply chain.

A process is underway to get nonu juice standards codified under the Codex Alimentarius, the international food code adhered to all over the world, which is “fantastic,” Mr. Vui said.

But while supply and quality may be met, the cost of doing business is still high, he added. 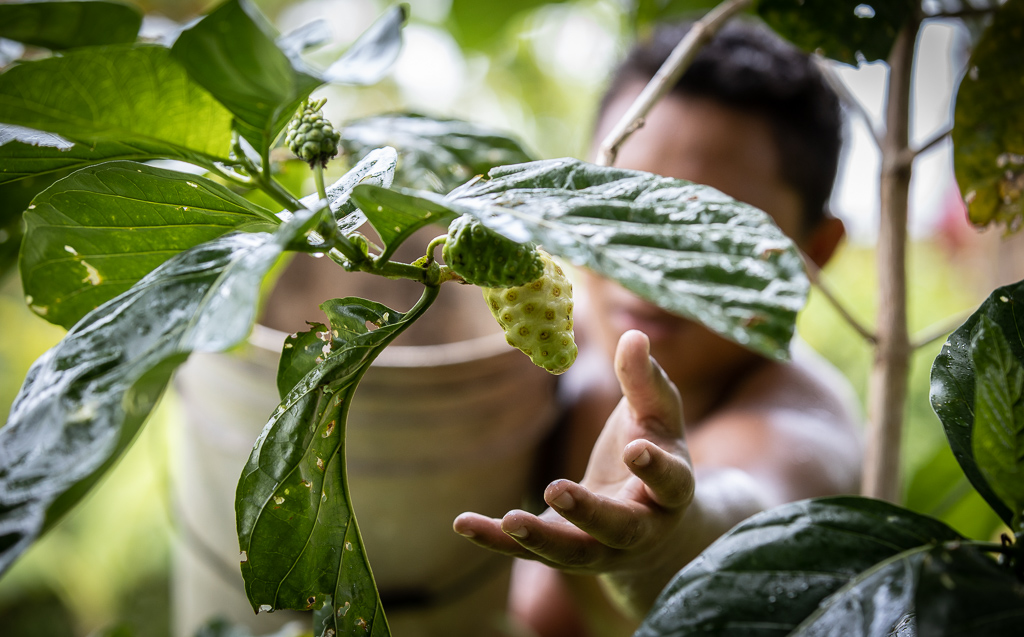 Mr. Vui is a keen advocate for duty free imports of nonu into China.

“We are in a very competitive market with other pacific island countries that still enjoy no taxes for their products into China.

“For the short term things look very good, but for sustainability of nonu and other agricultural products, government really needs to help the private sector out and regain these duty free incentives to ensure mid to long term sustainability of sales and competitiveness.”

Samoa once had duty free access to the Chinese market, until January 2014 when the United Nations graduated Samoa from least developing to developing country.

Since 2010, China has had a duty free, quota free market access programme for least developed countries with diplomatic relations to the country, including Samoa, which benefited from the scheme for eight years, four of which as an L.D.C, and another three when China extended the benefit to Samoa after graduation.

In that time, it was eligible for duty free tariffs on 95 per cent of its exports.

So when Samoa began to pay 20 per cent duty on its imports to China in 2017, exporters felt the hit.

It is something government is working on. In March this year, the Ministry of Foreign Affairs and Trade confirmed it is working on agreements on lowering or removing expensive tariffs, and just last week Samoa and China announced they were looking at the feasibility of a free trade agreement.

“For the short term things look very good, but for sustainability of Nonu and other agricultural products, government really needs to help the private sector out and regain these duty free incentives to ensure mid to long term sustainability of sales and competitiveness,” Mr. Vui said.