Much of what is said about Samoa’s relationship with China emanates from commentators looking through a cloud of ideology.

This weekend's China-Pacific summit in Apia was a rare chance to see the relationship up close and through open doors.

China’s lending to Samoa has been the subject of major concern in recent years. And so it should be.

A report this week from the Australian think tank the Lowy Institute dispelled the idea China pursued “debt trap” diplomacy, or the use of excess loans to take over countries by stealth.

But the authors noted there was plenty to be concerned about the way in which Chinese money is being dispensed, without enough controls or adequate repayment schedules.

At just under 40 per cent of our total debt originating from China and Samoa being one of the country's top three Pacific debtors, Samoa is a prime example of a nation whose indebtedness could expose it to financial shock in the case of a recession or disaster.

More still the Government statistics don’t capture the shocking control China has in the Samoan economy via foreign investment and financing.

According to a survey by thinktank Vox EU, Samoa’s banking and foreign investment linkages with China stood at an astonishing 60 per cent of our GDP in 2016, or nearly double second-placed Laos.

These figures show that growing discontent about Chinese economic power in Samoa is not without foundation. Their exports to the Pacific grew from USD$2.3 billion to more than $USD5 billion in the three years to 2017.

The strategy being followed by the Samoan Government has always been aiming to balance both sides of the West-East political divide.

Given the above, perhaps they have overleaned.

But there’s no doubt, too, that some of the criticism of China’s donor activities in the region are being magnified by its geopolitical rivals.

Japan has quietly been building railroads across South and Southeast Asia for years, including in India and, recently, Indonesia’s first subway. No one seems to have been asking questions about the quid pro for these projects.

Large influential nations have exerted soft power with large donations for centuries because they can.

For the most recent donations data available, China which has spent USD$30.2 million on Samoa, and was only just edged out by Japan by USD$900,000.

Of course this is is a form of geopolitical chess, or “the great game” of international relations, as it is known.

But there are signs the region may be beginning to reset its relationship to take on a more equal footing.

But at Monday's 3rd China-Pacific Island Countries Economic Development and Cooperation Forum, we saw a new aspect of nuance to the Pacific-China relationship.

The speech by the Papua New Guinean Deputy Prime Minister Davis Steven avowed never to compromise on his nation’s Pacific ideal when dealing with China.

He even asked China's visiting Vice Premier Hu for the creation of a Free Trade Agreement, something the two had discussed behind closed doors on Sunday.

(A growing fad for food produced in “clean” and “fresh” environments among China's wealthy middle class, could see even small numbers of Samoan delicacies such as nonu juice or clams make meaningful contributions to our trade balance).

“It’s to be welcomed that Pacific leaders were able to use a forum like this to put on a display of assertiveness,” Dr. Tess Newtown Cain, an Adjunct Associate Professor from the University of Queensland told the Samoa Observer.

Another emerging difference observable from Monday's summit, compared to the past two, is the growing recognition and treatment of the Pacific as a region – not a collection of individual nations.

Samoa struck plenty of deals on our own, certainly, but this was the first time that bilateralism was not the Forum's exclusive focus.

Premier Hu’s discussion on Free Trade Agreements focused on establishing commerce with the Pacific as a region. He highlighted the Chinese Government’s recognition of the region’s concern about climate change. And he laid out an eight-point framework for cooperation between China and the region.

Pacific leaders, such as former Tuvalu Prime Minister Enele Sopoaga, have long been arguing that we are unlikely to advance our aims on the world stage until our negotiating power is combined continentally.

Have a great Wednesday, Samoa and God bless. 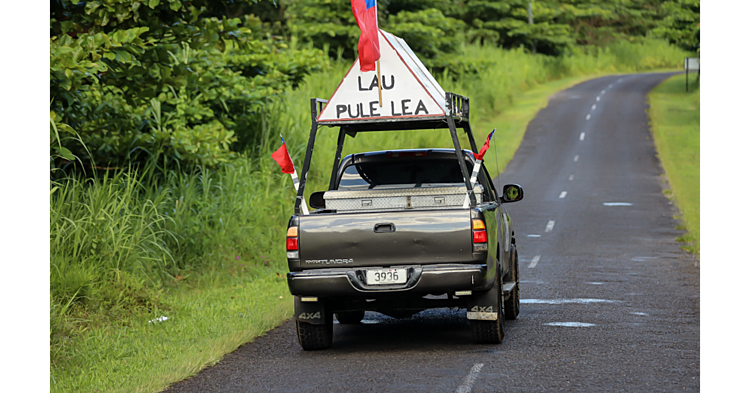