“I wanted to take what I have learned over the past 24 years and see what I can do to actually build something,” Robert Rounds said. (Photo: Vaitogi Asuisui Matafeo)

The new Commercial Manager of Samoa Airways, Robert Rounds, has “hit the ground running.” In his first three months, the man who is on a mission to help the Airline grow has already made several changes to the national airline.

Mr. Rounds, who comes to Samoa from Fiji with 24 years experience in the airline industry, said he applied to work here for the challenge.

He left his job as the Regional General Manager of Fiji Link, the domestic subsidiary of Fiji Airways, to try his hand at the nearly two year old airline.

In his first months on the job, he has secured a new menu with the caterers to be launched in November, begun conversations with mobile operators to improve payment options and begun the process of connecting flights to other airlines.

Mr. Rounds said he knows Samoa Airways has its difficulties, especially as a young airline.

But he is optimistic about its future.

“I wanted to take what I have learned over the past 24 years and see what I can do to actually build something,” he said.

“Samoa presented that opportunity to give back, to teach people, to learn, to help an airline grow which in turn supports the economy to grow as well, and the country to grow.”

He is passionate about Samoa as a destination.

“Samoa offers something uniquely different to the leisure market as well,” he said.

“It has great potential to grow because it has unique differences to status quo destinations like Fiji and Vanuatu, for example.”

Mr. Rounds believes Samoa’s cultural and spiritual richness makes it stand out from other parts of the Pacific where tourism, in part, has contributed to the dwindling of culture and religion.

He said as soon as he started working, he “hit the ground running."

“There are somethings that need to change here and now. There are quite a few things we have identified immediately that we need to change, for example we introduced airport upgrades immediately and excess baggage rates as ancillary revenue.”

He has also begun a review of airfares to ensure they are competitive.

“We are giving our competitors are a good run for their money,” Mr. Rounds said.

“We are not the size of any of our competitors, but we let them do what they do, and we will do what we will do in order to generate the revenue we need to meet the demands of our customers.”

Though young, the airline has already shifted prices lower across the Pacific. Flights and packages to Fiji have dropped since the new competitor stepped into the scene, Mr. Rounds said, and that is a good thing. 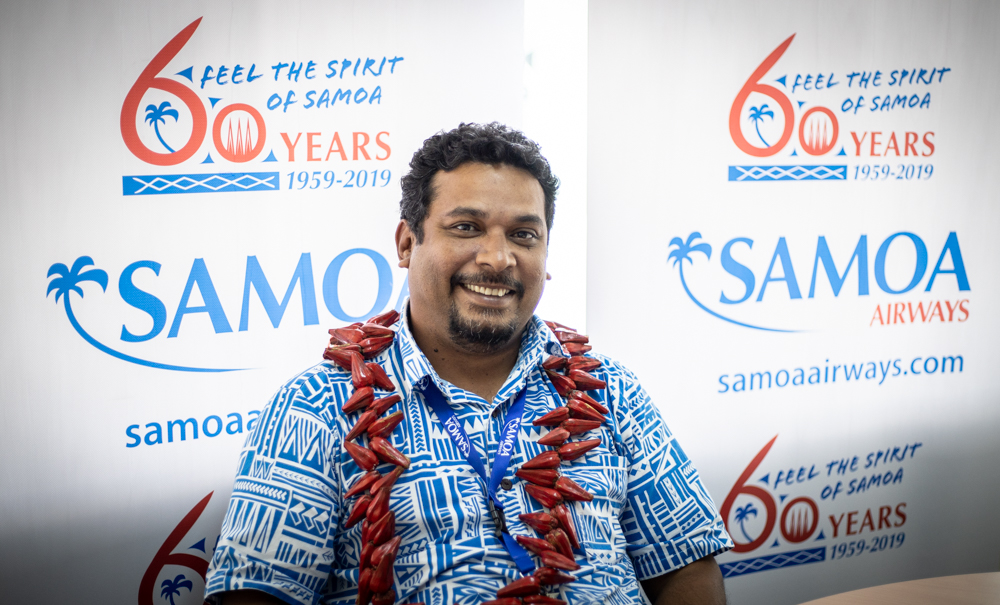 The future of the airline is rocky while it doesn’t own its own aircraft.

Samoa Airways is currently leasing a Boeing 737-800 from Malaysia’s Malindo Air, and recently extended that lease another six months.

The airline is paying higher than normal prices for the lease while Boeing’s Max 8 aircrafts are grounded in the wake of two fatal crashes.

Mr. Rounds said it’s the cost of continuing to run the business, instead of grinding it to a halt.

“The airline needs to continue operations, as a business you need to continue.

“Yes, we have a leased aircraft but it meets our needs for now, it means we are operating in the market and meet the demands of our customers.

“We ensure there is relevant competition, and ensure our capacity and frequency in the market ensures our hoteliers and ground operators continuously get fed into the market as well.”

Meanwhile, his focus is improving the airlines commercial viability, which includes saving costs where possible, and making more money too.

That means looking ahead to eventually getting more aircrafts when Samoa Airways begins reaching more international airports and partnering with other airlines.

“Right now we are a point to point carrier, but as an international carrier we want to ensure we grow our market, we want to move into being a network carrier and connect beyond our current gateways.

“Once that grows in terms of partnerships with other airlines then the market starts to improve, the feed will be stronger than it is from point to point.”

His vision is to see more people taking Samoa Airways flights to more destinations outside of Auckland, Sydney and Brisbane, and create a demand for more planes.

Getting there means deploying the technology to connect Samoa Airways to other airlines through a global distribution ticketing system, Mr. Rounds said.

If Samoa Airways can get access to a worldwide computerised reservation network, it can allow customers to make longer journeys, while booking through their local carrier.

“They are systems that are used by top international carriers in terms of selling points.

“For example, it means that we can interface with other systems and you extend your distribution and selling power globally.

“But that comes with a price tag. Not everything is cheap and we are a start-up carrier so we have got to strategically work towards how we can get to that global distribution system and some of these implementations can take nine to 12 months.”

It will take at least another year if not more, and the carrier’s current ticketing system Radixx “is meeting our needs for now,” Mr Rounds said.

He is in discussions with a global distribution system about getting Samoa connected.

The other big change he has made is how Samoa Airways relates to its external sales people: local and international travel agents.

Mr. Rounds said the agents on the ground selling flights and packages know best how the airline can improve service.

“There is nobody better to sell us than our own people,” he said.

“There is nobody to give you better feedback than the people that sell your tickets.

“They will tell it like it is and that is the best part.”

He said the agents have reported challenges with disappearing reservations, seat availability, pricing, customers struggling to access parts of the booking process.

And he is eager to face up to the criticisms, and has seen an instant relief in opening up a feedback mechanism.

“We can’t hide in the dark and say no, I can’t answer that question. We have got to be out there, step up and say we know there is a bit of difficulty around this but let’s find a solution to get this done better.

“The issue is that the issues weren’t discussed, so we needed to step up our relationships with the agencies, understand what their needs are, what problems they are facing, for us to ensure we meet the customer’s needs.”

Mr. Rounds has also begun a website audit that is reviewing the site based on Google Analytics to improve its usability, and is in conversations with mobile operators to get mobile payment options for flights.

He wants to see locals and international customers being able to pay for flights without credit or debit cards, something many Samoan people still do not have.

“I would like somebody in Savaii to buy a ticket without going to an office or trying to send money across.

“If you don’t meet demands here at home, we have failed because the people at home are the people who first and foremost we should see what we can do for.”

Mr. Rounds, who is originally from Fiji, says he is in for the long run. His pregnant wife and seven children will follow him to Samoa in December.

He has one three year old girl and six sons, the eldest of which is 18 and graduating high school this year.

“But I am here to do something different, I am here to see how I can support his airline to take it to another level, to support the economy from an airline perspective, how we can grow the destination.

But he said his family fully support him, especially his wife whom he considers the strongest person he knows.

His love for family informs his attitude to work, Mr. Rounds said. He has tried engaging Samoa Airways staff to feel more invested in the business.

“We need to ensure they are engaged and participate in things we are trying to do to improve and innovate in the company,” he said.

The new menu for the in-flight service was one way to do just that. Mr. Rounds wanted to offer something more “authentically Samoan,” and needed his local team to help.

When the caterers, Aggie Grey’s In-flight Catering were ready, they hosted a “tasting” for the team, where they were all invited to give feedback on the new offerings.

Among other offerings, the new menu will include breadfruit and luau curry, local roasted chicken, seasonal vegetables and supo esi, the local papaya and tapioca pudding.

Mr. Rounds wants to make the Samoa Airways service and in-flight experience to be unique and keep people coming back.

“The caterers are excited about it, it gives them a bit of a challenge.” It will also be a way to support local farmers and growers more.