A senior official of the Unit Trust of Samoa (U.T.O.S.) has given evidence at the murder trial of its former Chief Executive Officer, the late Sa’u Justina Fa’asamoa.

U.T.O.S. Assistant Chief Executive Officer (A.C.E.O.), Fainuulelei James Ah Wai, spoke on Wednesday into some of the milestones achieved by their former C.E.O. before she passed on.

Sa’u’s husband, Kolani Junior Lam, has been accused in relation to the death of the 43-year-old mother of Apolima.

Represented by defence lawyer, Leiataualesa Komisi Koria, Lam has pleaded not guilty to all the charges against him.

Fainuulelei said he had known Sa’u from 1993 when they attended St. Joseph's College.

He spoke highly of Sa’u who was also named Dux for the year 1993 and later became Treasurer for the Marist Old Pupils Association.

During her time as the Treasurer, Fainuulelei said it was because of Sa’u that prompted the change of group's name from Marist Old Boys to the now Marist Old Pupils Association.

Sa’u’s accomplishments were not limited to her Marist association with achievements expanding to her role in Government.

“She was a great leader in our office, with so much wisdom and milestones she achieved,” said Fainuulelei.

“We have gained a lot of investment and trust from people and new partnerships with international companies because of her.

“It was her leadership that drove U.T.O.S. to its success. She is humble, simple, has a clean heart and disliked gossip. Our office misses her dearly.”

Prosecutor and Assistant Attorney General, Magele Leone Su’a, questioned the A.C.E.O. on what the milestones he has mentioned in his evidence.

In response, Fainuulelei said when U.T.O.S. started its operations in 2011, it only had 69 clients paying contributions.

“To date that number has grown to more than 3000 contributors,” he said.

“She had also worked to expand our network and partnership to Cook Islands, Fiji, to rural villages and to Savai’i.

“Her leadership was the driving force behind U.T.O.S. success and its achievements.”

The witness noted that Sa’u was the first C.E.O. of the entity and had been in the position for seven years, two consecutive terms before her death.

On 19 October 2018, the Friday of the week when Sa’u passed away, the U.T.O.S. received an email from the Unit Trust of Fiji.

According to Fainuulelei, the email was to inform the office that U.T.O.S. Fiji has agreed to sign a Memorandum of Understanding with U.T.O.S. Samoa

Sa’u was also invited to Fiji to attend a launch in Fiji, said the witness.

However, that trip had to be taken by another official from U.T.O.S. when Sa’u passed away unexpectedly.

Next to give evidence was Senior Sergeant Sani Afu who is also the investigating officer in the murder trial.

In his evidence, Mr. Afu said police received a call from hospital at around 4 a.m. regarding Sa'u's death.

The Senior Sergeant explained they visited the hospital to take photos and spoke with the doctor on duty to get some information about the death. 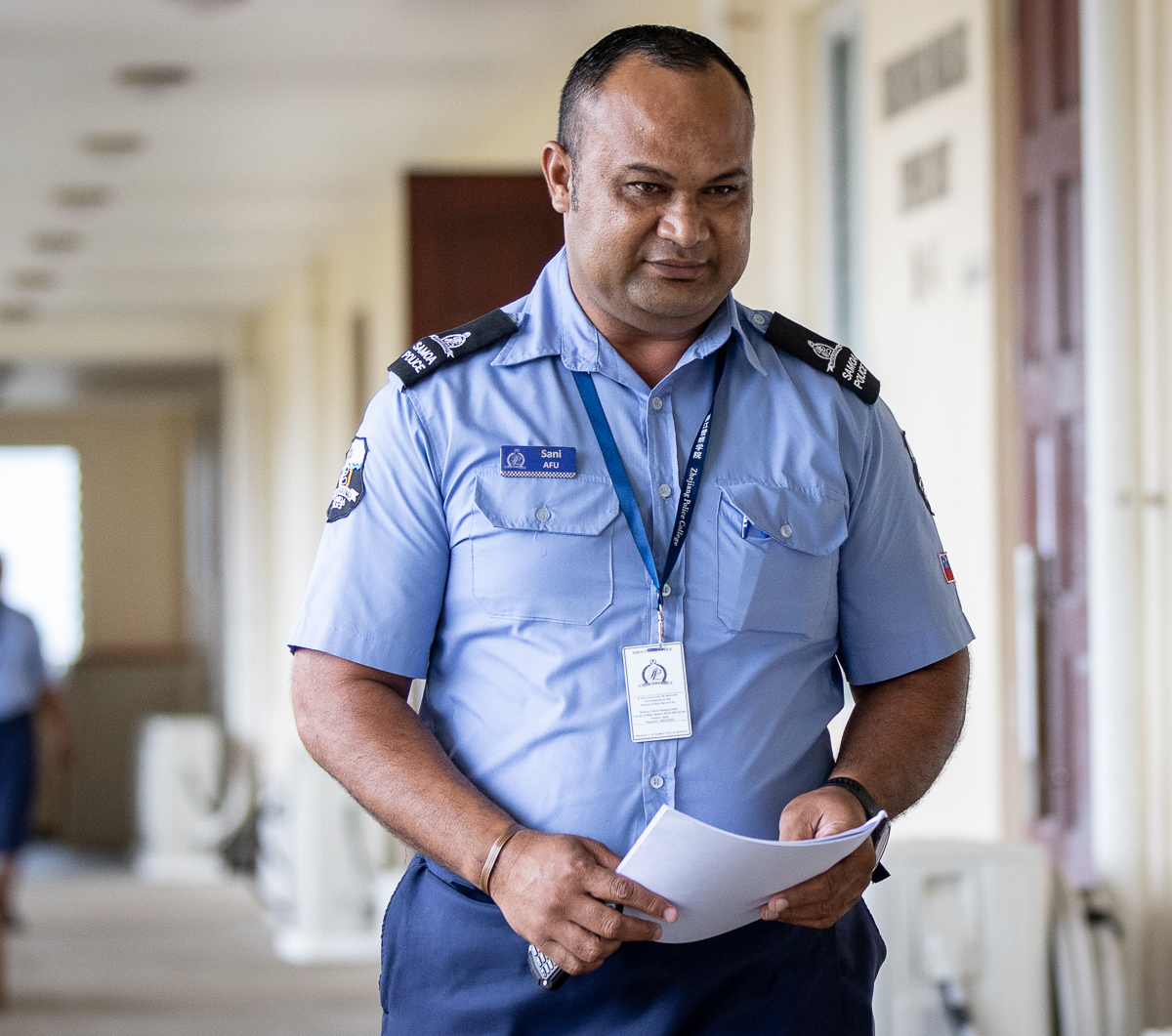 At around 7am police then proceeded to Sinamoga where they spoke with Lam about what had happened.

Upon questioning Lam, Sr. Sergeant Afu said the defendant alleged that Sa’u had hung herself.

“He told us that they were drinking the night before and he had gone inside the house for about 15 minutes to check on the kids,” he said.

“Kolani told us that when he came outside he did not see her (Sa’u) where they were drinking and went looking for her.

“He then saw her feet and branches of the starfruit tree lowering down and then tried to lift her up…he then went inside to get a knife to cut off the rope.”

According to Sr. Sergeant, from what was gathered by the Police on that day, they did not suspect Lam as an accused.

The officers then took photos of the rope, the starfruit tree before they left on that day.

It wasn’t until some days later when Lam was arrested and charged for murder.

Sr. Sergeant Afu said his decision to charge Lam was dependent on the pathologist report summary and advice from the Attorney General.

In response, the senior Police officer said for some of those days, Lam did not want to go home because he said he was lonely.

The defence lawyer also raised questions as to why Lam was asked by Police officers to take off his shirt so they can take photos of him.

Leiataualesa said Lam stated that the officers had taken photos of his body to see if they could find any marks.

In response, the Sr. Sergeant said he has not seen any photos and is not aware if there were any photos taken.

He explained that there are cases where suspects have photos of their bodies taken if they want to be cleared.

Following the witness, prosecution closed their case against Lam after calling about 20 witnesses.

Prosecutor Magele had also made an application to amend the dates on the assault charge against Lam.

Defence lawyer, Leiataualesa objected to the application that the change in dates as it will increase the scope of the alleged offending to three months.

She ruled that the cross examination by counsel relating to the incident did not make a big deal to the dates.

“There is no prejudice to the evidence and amendment is allowed,” she said.

Justice Tuatagaloa adjourned the matter for defence to prepare their case on Thursday.