Vailoa residence coming to registered for the Office of the Electoral Commissioner (Photo: Vaitogi Asuisui Matafeo )

The Office of the Electoral Commissioner (O.E.C.) will raise awareness in villages on how to vote in the 2021 general election.

Electoral Commissioner, Faimalo Matthew Lemisio, told the Samoa Observer that officers from his Office will visit villages in Upolu, Savai’i, Manono and Apolima islands to raise public awareness on electoral laws and the importance of voting.

He said the awareness is important, as a lot of people in Samoa still don't understand the voting process and how important it is for them to participate.

“We are focusing on public awareness and registered voters because they should know why it is important to vote, also understand about laws towards voting,” he said.

A team comprising 10 people will focus on public awareness and voter registration when out in the villages, added Faimalo. The O.E.C. in town is serving members of the public with similar queries.

A knowledgeable and aware voting population would augur well for the electoral process in Samoa.

“The more people are aware of what voting is about, the more they are going to participate in the elections; also the person who is running for the election,” Faimalo said. 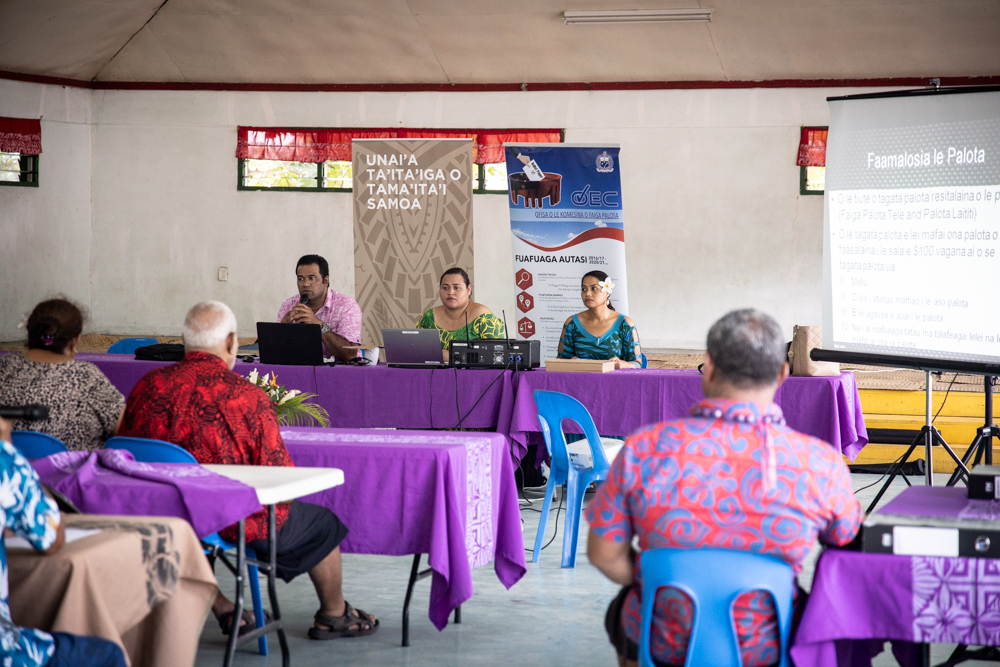 She said the program by the O.E.C. would benefit the voters as it would enable them to better understand the democratic process.

“I did not understand before that if I stay in Vailoa, but I have a matai title from another villages and I don't know if I can use it here or not. But now I understand that I can vote here at Vailoa,” she said.

Another member of the public, 50-year-old Muaaufaalele Auva’a, said the program was helpful for the public as it enabled the voting population to have a better understanding of the process.

“If the people have a clear understanding, than the Office of the Electoral Commissioner’s job will be easy to do for the upcoming elections,” he said.

Mr. Auva’a told this newspaper that the public awareness exercise on voting and Samoa's electoral process is a new initiative as he has not seen the office do one before.

“Many people asked the member of the O.E.C. what about having a chief title in Savai’i and the office member reply yes they can and it is up to them,” he said.

Samoa will be getting either the Pfizer/BioNTech or Oxford University AstraZeneca vaccine, the Director-General of Health has said this week, and whichever comes first will be used first.