Reconstruction of deteriorating main roads around Upolu and Savai’i will be competing for funding with the Government's ambitious infrastructure agenda of building new major roads and bridges, the head of the Land and Transport Authority has said.

In response to e-mails from the Samoa Observer, the Land Transport Authority (L.T.A.) Chief Executive Officer, Galumalemana Titi Tuvanu-Schwalger, said new contracts for routine road maintenance were currently awaiting approval. The contracts are expected to be awarded within the next two weeks.

But when pressed for a commitment for when the repairs of roads long-complained about by residents would  begin, the C.E.O. would not commit to a timeline and said they would have to compete with the Goverment's more ambitious infrastructure agenda.

The C.E.O. said reconstruction of sections of the main road around Upolu and Savai’I, which have been identified to be in a condition beyond maintenance, will be ongoing, starting from the East Cost road until the Le Mafa pass.

Galumalemana did not respond to specific questions about the L.T.A. and its role in monitoring road maintenance companies and the work of their repairmen.

In the previous week, villagers from Lefaga have appealed to the Government to fix the deteriorating conditions of their road.

As a result of the delayed maintenance from Authority, men from Savaia Lefaga brought out their shovels to patch up the poorly maintained roads themselves.

Some residents have raised concerns over maintenance companies filling up potholes with dirt and sand which later washed away away with rain.

A villager from Tafagamanu Lefaga, 57 year old Mareta Tuala, said the road problem has been a big problem for locals.

“We desperately need the roads to be fixed because it has become a huge problem for our vehicles,” she said.

“For some families, they have used huge rocks on the front of their homes so the cars will not use their property as a road.”

Another traveller from Saanapu, Vitolio Sialofi, agreed. He pointed out that while the cost of vehicle registration continues to increase so have the potholes.

“If people are paying this much to register their vehicles and public transport during a specific period then roads should be maintained regularly,” he said.

“But the problem is the maintenance companies come once in six months to fill it up with dirt and then leave.

“It’s a headache to say the least because we are not paying car registration to have dirt used for maintenance instead of proper tar seal. The authority really needs to look into these road works and monitor it.” 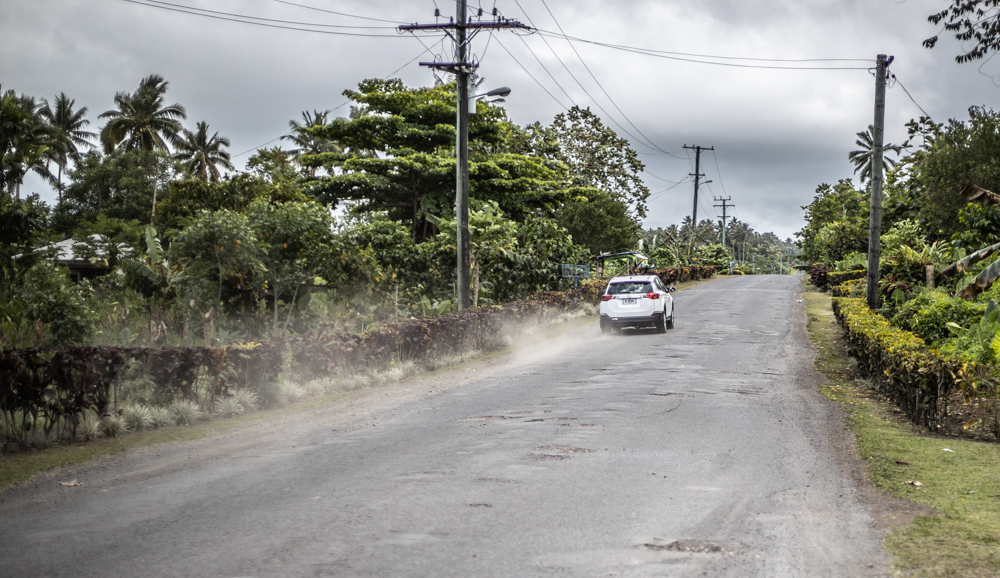 In March this year, the Minister of Works, Transport and Infrastructure, Papali’i Niko Lee Hang, issued a stern warning to road contractors.

Papali’i was particularly concerned about the repair and maintenance contractors who continued to fill up potholes with rocks which became washed away days after by the rain.

“There are some contractors that don’t fix the roads properly, they just take the money to make more profits but the road work is not good,” said the Minister.

“So I have decided whichever contractor doesn’t do a good job (with roads) we will no longer award them any works.

“I have noticed that some contractors just want to bid low, so they can win the tender but they struggle to do work properly.

“There will be no more variation – they have to bid from terms and conditions provided – and the Land and Transport Authority (L.T.A.) is strengthening their monitoring works to ensure that Government money is well spent.”

The Minister had also blamed the monitoring agency, the L.T.A., for not following up and monitoring the work of the contractors.

He said the Authority leaving road works to the contractors produced unsatisfactory results.

Part of ensuring the contractors are on track and fixing the roads properly is for them to keep a performance record, he said.

“So eventually we will have better roads but works will also depend on the funds we get," the Minister said.

The issue was also raised by the Prime Minister, Tuilaepa Dr. Sailele Malielegaoi, this year who echoed concerns about pot holes and the need for contractors to do a better job.

Tuilaepa said despite the hiring of contractors to fix roads many remain in bad condition.

“It means this [road works] needs to be changed too,” he said.

“This is the case when it rains - the roads have potholes and they (road contractors) just fill it up with stones but they are paid money to fix it and the Government needs to look into this and change it.”