Ten years on: Tsunami reflections from a health worker

A day that will never be forgotten (Photo: NZ Herald Focus)

I had just finished morning devotion when the earthquake happened. I sat there and listened to the neighbours’ dogs barking and the dishes falling off shelves. After the earthquake, I got ready to go to work as usual.

I was told that all the taxis were being advised not to go into town area, and it took almost an hour for my taxi to arrive. How insignificant it seems now, but I remember feeling annoyed and impatient with the driver for driving so slow, I did not want to be late for work!

The driver was the first person who told me that a tsunami had hit Lalomanu and that people died. I remember thinking “That’s ridiculous, we don’t get tsunamis, and people need to stop spreading these fake news!”

When I got to the lab, someone confirmed the driver’s story and told us to be prepared because they were bringing in bodies from Poutasi. That first hour at the lab is a bit of a blur, but I remember the hospital chapel vividly, the sounds of lamentations, the smells and the faces of the living and the deceased.

I was one of the laboratory staff that assisted Dr. Sonal, Dr. Rahman and our then mortician Ene Reupena in the Hospital Chapel. We were asked to document the injuries on the deceased bodies.  The first four bodies had already arrived when I got there. They were labelled 1 to 4 because we did not know their identities at the time. Peone was writing out more numbers in anticipation of more bodies.

She had written up to “14”, and I remember asking her “Are we gonna need that many numbers?”. I found out soon enough.

When the numbers reached 18, I thought surely there can’t be more! But the cars kept coming. I remember the workers standing there transfixed by the reversing cars, for those few seconds we all watched. 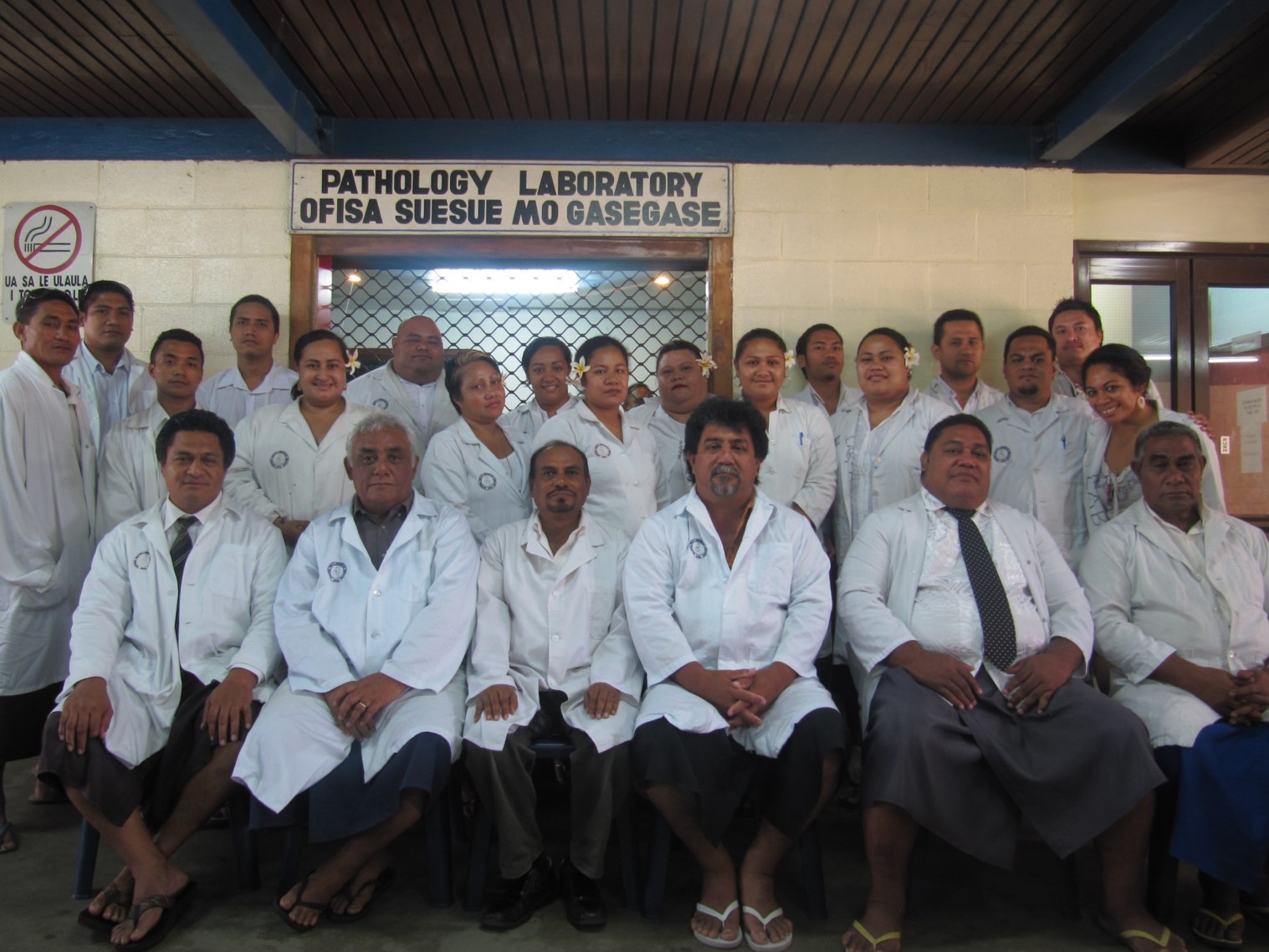 If they reversed towards the emergency entrance, that means the person is alive and needs medical attention, but if they reversed towards the chapel entrance, then that meant we needed a new number for the new body. Part of the job delegated to us was to find relatives to identify the bodies. Once someone identified the deceased, we would write their names next to the assigned number. I was ok with the dead, it was the ashen look of shock and hopelessness on the faces of the living relatives that broke me.

I tried my best to comfort the family members, but one man identified his brother-in-law, turned to the bodies next to him and identified his mother, and then his son. I could not help the tears, it was just too heart-breaking, I did not know what to say, so I hugged him and we cried together. The second time I cried was when they brought in a baby, about 6-8months old, I carried her while they tried to make space to put her.  She looked so peaceful and so beautiful with her white stud earrings.

I remember the gruesome injuries on some of the bodies, the things people should only see in movies and TV series. Some of the bodies came wrapped in the same floral material. We were later told that they were window curtains of the Poutasi/Lalomanu hospital. I know it sounds undignified, but that was the disturbing reality of that day; they used whatever they had at the moment to wrap the bodies.

I kept trying to reach my Mom at Faleasiu, but the phone network was understandably overwhelmed that day. Our family house at Faleasiu is right on the ocean. When they told me that more than one wave had hit, I thought it possible that another could come any minute now and hit the other side of the island.

After all, a tsunami had just happened in Samoa, and the bodies of the deceased were being brought in on the back of trucks. Anything was possible in the worst possible sense! I’d be lying if I said my faith never wavered that day.

Amongst so many emotions, I also felt fear. I remember the fear of not knowing if my mom was safe. I feared that one of the bodies they brought in would be my mom or a relative. My uncle was the faifeau at the Lalomanu EFKS at the time. But they were lucky, I was lucky. I was spared the ordeal of having to identify a loved one. But the others… I could only look on and pray that God give them comfort and peace. I remember Moeumu Uili, the father of the beautiful baby, the wailing mothers, the weeping men, and all the while in the background, the constant beeping sounds of the reversing cars bringing in more bodies. These are sounds you don’t just forget.

It was amazing how everyone functioned, I think everyone was just on autopilot, not fully registering the magnitude of the situation. We all kept a brave face for each other.

I remember being told to move the bodies closer together to make space for more. Eventually, the whole chapel was covered with the bodies of the deceased, and the hospital had to bring in freezer containers to store the other bodies. Most of us only stopped to rest in the evening, when most of the victims’ bodies had been documented and processed.

I do not have any photos of that day. I remember we took a photo in the chapel, but it felt irreverent to those lying there, so I promptly deleted that. I remember a very nice photo of Ene (RIP) carrying a child, I think it was taken by NZ reporters.

As you may know, some of the bodies were only discovered much later in the week. Dr Rahman (RIP) allowed me to accompany him on one of his visits to the mortuary to examine those bodies. Seeing is not always believing. I saw the mangled bodies, the bloated bodies, the dismembered bodies, but it was still hard to believe that all this had happened in Samoa! Anyone who was there and worked at the hospital will remember the smell that lingered for days in the hospital grounds.

Upstairs in the pathology lab, that song kept playing, I don’t remember the name of the song but ever since then, I refer to it as the “Tsunami song by Johnny”. It always makes me think of that fateful day. The laboratory staff were overwhelmed with not just performing tests for the injured, but seeing to so many volunteers who came to donate blood. Other people came with food, and they kept coming even after midnight. Amongst the pain and devastation, there was so much goodness too.

I am always grateful for the Samoans’ sense of humour. Throughout that week, some lab members made it their mission to scare everyone with ghost stories, wet footprints with strategically placed blood drops along the corridors, running tap water late at night, looking in from the outside and whispering the names of the lab people inside.

I admit I was one of those pranksters that preyed on the “makafefes”, it was after all, free and much needed comedy! I also learnt that some of the boys are really just big soft teddy bears who are afraid of the dark! I was gant blivit.

I’m always amazed at the resilience of the Samoan people. Usually in the western world, people who are affected by such events often need to have therapy sessions. Not us. The staff tearoom served as our therapist’s couch.

We will never know why bad things happen to good people, why God would let such a thing happen to anyone. But we are not supposed to know, we are asked to TRUST and keep FAITH that His ways are better, His Plan is for the greater good. Even when it hurts.

This is not just my story. This is the story of everyone that was there that day.

The hospital management, all the healthcare workers, the drivers, the porters, the administration staff, the random strangers that helped carry the bodies, and especially the families that lost so much that day. These are scenes you don’t just file away. By sharing this, I hope it brings some comfort in shared experiences. In some way, this is me on the therapist’s couch.

Some wounds never really heal, but some scars, both mental and physical, I bear with gratitude, as a reminder that every trial reinforces our faith, and that we made it. “Consider it pure joy, my brothers and sisters, whenever you face trials of many kinds, because you know that the testing of your faith produces perseverance” James 1:3

In remembrance of those who passed, and those who endured their passing. With love.