"Aunty Tala" in town and she's "not sorry about it"

Samoan comedian and actor, Tofiga Fepulea'i, is back in the country with new jokes and he is not "sorry bout it" one bit.

The father-of-three has returned with some of his golden acts including Aunty Tala, as well as new stage acts to keep his audience entertained.

The new acts include one featuring his relationship with his three sons aged 13, nine and eight and what it is like being a father, touching on the different styles of child discipline between a Samoan and a palagi.

Funnyman Tofiga says he is always blessed to be back in the islands, especially as a New Zealand-born Samoan.

"You know it’s important to my parents and knowing that my own people in Samoa enjoy[s] what I do, so it’s very satisfying," he said.

"And just nice to come back and we’re always fortunate that we’ve got our home away from home, here at Taumeasina Island Resort."

He said Samoans need a good laugh this time around, especially after the Rugby World Cup match between Manu Samoa and Scotland.

"Come for laughs especially after the game against Scotland. But I think it is one aspect of our culture that we’re very unique on, our Samoans are very good at laughing you know, about ourselves," said Tofiga.

"You know, you’ve got a [funeral] and you hear more laughter than crying, and there’s been a lot of people talking about just wellbeing and mental health issues. I think laughter is one of the areas that is very key to emphasize, to remind our people to take time to laugh and not take things too seriously, where we get too stressed out.

"I guess with this show there’s a lot more of new material in terms of just me being a father, you know I’ll touch a little bit on that with my three sons; still got good music in there with a bit of singing and dancing.

"Aunty Tala is back again to try and look for her Mr. Right, she believes that she’ll find her this Friday because they’ve got a whole bunch of conferences, maybe she will find an international husband here, and maybe she’ll have a farmer.

"Yeah so aunty Tala is back again and good old uncle is back to sing a few beautiful women here in Samoa, and most of all just telling a few jokes and touching on some other things that haven’t been talked about in other shows."

The 'Sorry bout it' show is this Friday, October 4 at the Taumeasina Island Resort. General admission is $50 while corporate ticket is $150. 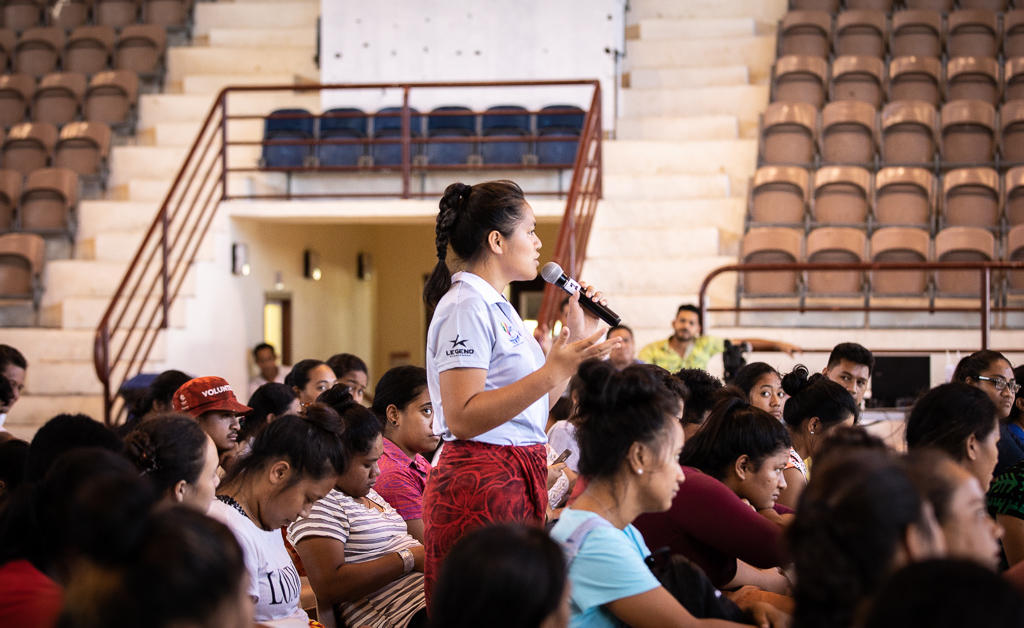 Asked about his thoughts on the Manu Samoa game, he said his support for the national team remains unwavering: "Sport is sport, you win some you lose some".

"Sometimes you have good teams and other times, the officials like [referees] and them, but it is what it is, as long as we support our boys regardless.

"They didn't go out there to lose on purpose, it's just tough, everyone wants to win," said Tofiga.

Tofiga told Samoa Observer that his sons love to visit Samoa, and one of their favourite activities is riding in the back of a pickup truck because it is illegal in New Zealand.

"They love the swimming pool here at Taumeasina, we love to go Frankie’s down the road because the food is cheaper, and it’s real island food and it is nice to support the locals as well, I love their fa’apāpā because it’s nice and fresh and warm.

"The luaus they have as well, and our family down at scoops, they love the New Zealand ice creams.

"We try [and] keep it simple when we’re here long enough, like we’re here for a couple of weeks, so we’ll go over to Savaii, to Papa Sataua and see my family over there, soon."

Tofiga found time to visit National University of Samoa (N.U.S.) on Wednesday with staff and students asking him questions about his passion for comedy, combating violence against women as well as his most recent casting as a supporting act in New Zealand-produced comedy movie 'Take home pay'.