Sports
The Manu have made four changes to their starting XV for the game against Scotland on Monday night, all of which have been forced by injury or suspension. (Photo: Thomas Airey)

The Manu have played Scotland well in their two matchups over the last four years, but coach Valeuagaomatagi Steve Jackson insists that history means nothing.

But neither of those sides was coached by Vaeluagaomatagi Steve Jackson:

“The past is the past, this is a different group of men and we’re in a different competition.”

He said the main thing for his side is sticking to how they trained.

“Yes there’s a focus on them, but more of a focus on us and executing what we need to do to be successful,” Vaeluaga said.

That 2015 game in Newcastle was a fairly unstructured affair which maybe suited Samoa more than Scotland.

But Vaeluaga said his team is completely different, and play with defined structures and systems.

“But we give the full backing to our players, if they see something then you go and play,” he said, noting the Manu showed that against Russia. 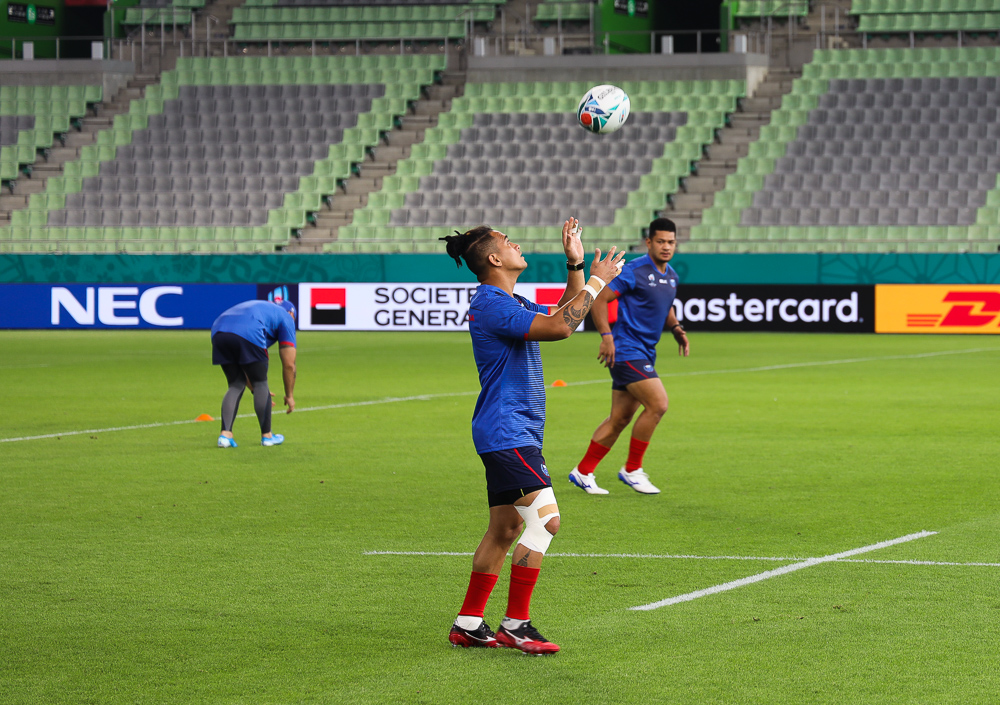 He said rugby is an old game, and you always need to break teams up front:

“The game’s normally won and lost with the forward pack.”

That pack gets boosted with the return from injury of captain Jack Lam at number eight, and Piula Fa’asalele onto the bench.

Vaeluagaomatagi said their restored presence is huge, and they are two guys with maybe the highest pain tolerances in the world.

Fa’asalele makes his return from a broken arm after eight weeks on the sidelines.

“He’s had a rod put in his arm, and he’s done unbelievably to get himself here,” Vaeluagaomatagi said.

Fa’asalele said everything that has come before has put him where he is today; on the eve of  a Rugby World Cup debut.

“For me it’s been an eight-year journey, full of ups and downs that all rugby players go through,” he said.

“I live in the moment and I’m here now.”

He said   the beauty of rugby is those ups and downs, and it’s a serious game that you can’t forget to enjoy:

Kickoff between Samoa and Scotland is at 12:15 am Samoan time on Monday night/Tuesday morning.