Top marks to the Government for increasing audits of public transport in Samoa to boost safety and reduce road toll.

The change in policy will now see the Lands and Transport Authority (L.T.A.) increase its audits of public buses and taxis from a bi-annual to quarterly (in a calendar year) schedule.

The Minister of Works Transport and Infrastructure, Papali'i Niko Lee Hang, revealed the changes when he was asked by the Samoa Observer to confirm the new audit schedule for buses and taxis.

This newspaper published an editorial in August this year – which appealed to the authorities to increase their audit of vehicle conditions including that of public buses and taxis – after a bus crash in Savai’i in June this year left over 20 passengers injured, and a collision in Savai’i in August claimed two lives. In January last year a bus with 46 passengers flipped several times on the road at Faleula and landed on its roof, killing three people and injuring over 30.

Therefore, the quarterly audits by the L.T.A. will go a long way in ensuring local buses and taxis are in good running condition, and are not risks to both the passenger or customer, the driver as well as pedestrians on the roadside.

Minister Papali’i put the Government’s decision down to the increase in traffic accidents on roads in Samoa while adding that the fees will remain unchanged.

“The licensing fees remain the same, but due to the numerous traffic incidents, the L.T.A. has required the licensing to be done four times a year," he said.

“This means, the six months licensing fees will be slashed in half, but in the end it will be the same old fees, nothing has changed.''

The bus and taxi inspections will be done every three months, the Minister said, until the traffic enforcement functions of the L.T.A. are transferred to the Ministry of Police in line with changes approved by the Parliament.

While we acknowledge the Government’s proactiveness to address the increasing road toll in Samoa, we must ask whether the focus on the running condition of vehicles (including buses and taxis) will provide a long-term solution?

We ask this while being mindful of the role of human error in vehicle accidents. Human error could be a driver falling asleep on the wheel, trying to send a text message, answering a mobile phone, taking a wrong turn, speeding or even a lack of understanding of road signs. 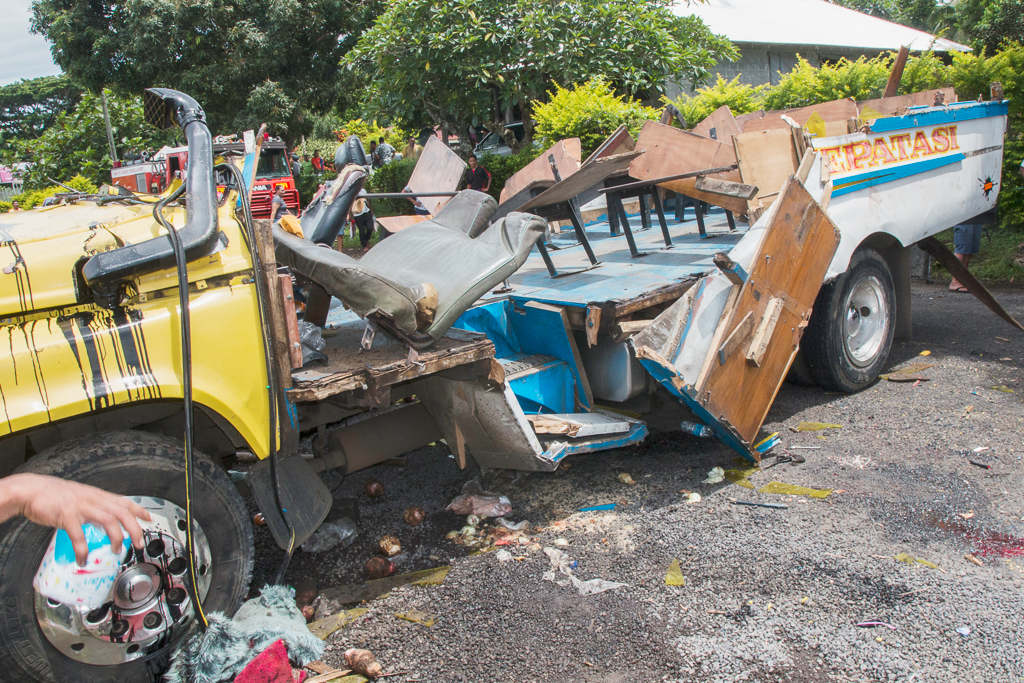 Independent studies commissioned by traffic regulatory authorities in governments around the world point to human error as the main culprit behind vehicle accidents.

For example, in America the findings of a study by the U.S. Department of Transport’s National High Traffic Safety Administration released in 2015 showed that 2 per cent of car accidents were caused by the environment, 2 per cent by vehicles, another 2 per cent by “unknown” causes, and a mammoth 94 per cent caused by human error. Data for this study were collected between 2005 and 2007 with a weighted sample of 5,470 crashes investigated.

In Australia, the most common cause of car accidents and road fatalities are reportedly driver fatigue, speed, distraction (including drivers’ use of mobile phones), and alcohol or drugs according to the National Road Safety Partnership Program.

Therefore, it would be irresponsible for the Samoa Government to overlook the responsibility, that bus and taxi drivers have to road safety. They are in the “driver’s seat” – just like the pilot of an aircraft – and their safety and that of their passengers are in their hands from point A to B.

Should drivers of Samoa’s public buses and taxis undergo tests to ensure they are certified public transport drivers? We believe the quarterly L.T.A. audits should also apply to the drivers and they pass a “fit and proper persons test” to ensure the best, experienced, and most qualified driver is behind the wheel.

The deployment of L.T.A. officers or Police traffic officers on peak periods – to carry out random inspections of public buses and taxis and subject drivers to checks including the use of breathalysers to identify drunk drivers – should also be stepped up.

And last but not the least, the study by the U.S. Department of Transport’s National High Traffic Safety Administration found that 2 per cent of car accidents were caused by the “environment”. The environment, in this instance, could include the road condition at that material time.

Minister Papali'i might want to send officers from his Ministry to Tafagamanu, Lefaga to inspect the condition of their road, in response to an appeal by the residents there. Pictures published by this newspaper recently show this national asset to be in desperate need of maintenance.

Have a wonderful Friday Samoa and God bless.

From humble beginnings, legacy of hard work and not forgetting the poor

OPINION: What’s truly commendable is the fact that despite the growth, S.C.B. has not forgotten subsistence farmers, the less fortunate, families and small businesses in the community by giving them easy access to financing that have cushioned the economic blows.

WiFi debate politics at its worst

Regardless of what transpires in court, what we have seen this week is an unfortunate display of politics at its worst. The leaders of the nation’s two largest political parties have locked horns over an issue and the result has been a debate of the most unedifying kind.