The Samoan Head of State, His Highness Tuimalealiifano Vaaletoa Sualauvii II, has given his blessings to a Samoan delegation travelling to Israel.

A total of 25 representatives will represent Samoa at the Feast of Tabernacles in Israel next month.

Tuimalealiifano offered a prayer of blessings toward the delegates on Saturday at his residence at Vailele.

“We thank the Lord for the Feast of Tabernacle which reminds us of his grace, care and provision upon our lives in good times and even in adversity,” he said. 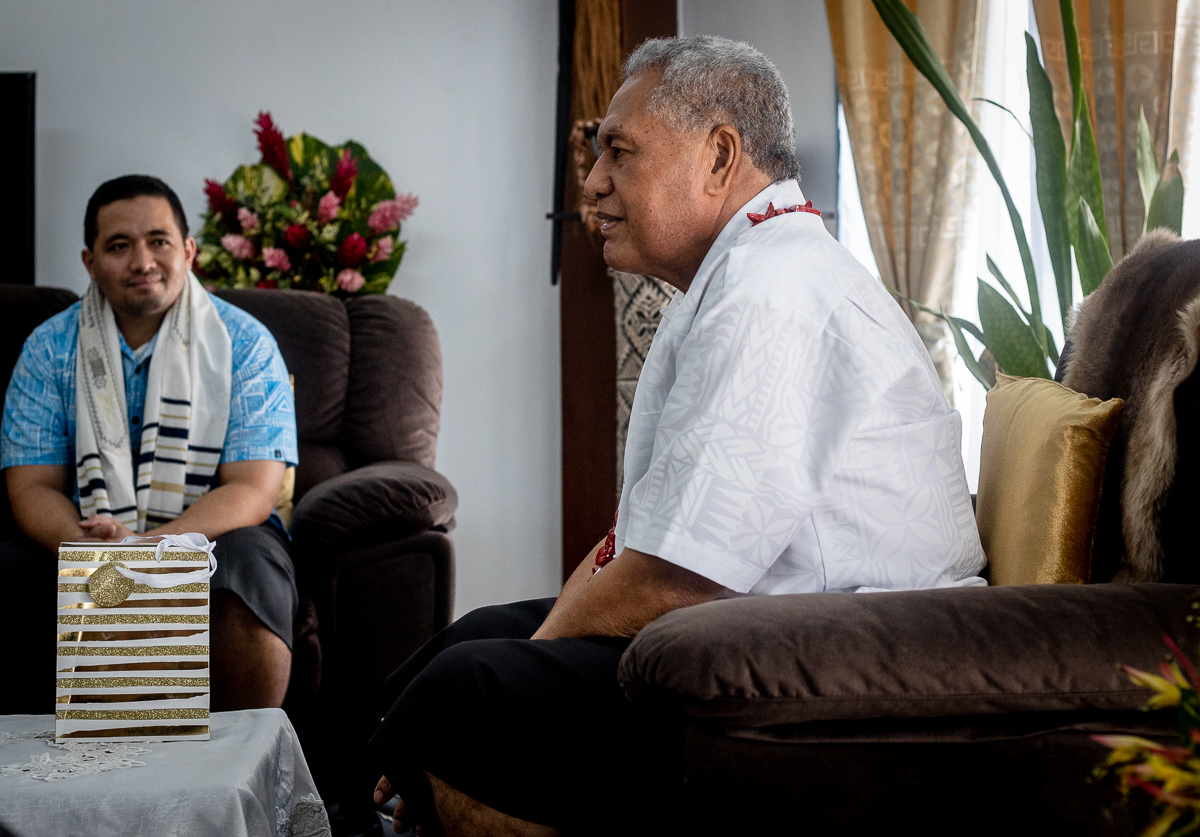 He prayed for God’s blessings for Apostle Cruise Westerlund and the Samoan delegation travelling for Israel, who will be representing Samoa at next month's celebration of the Feast of Tabernacles in Jerusalem:

“May the Lord cover you all with the holy blood of Jesus Christ in whatever form of transportation they may deploy and grant them a safe return to our shores.

“Bless their families who will be waiting as well. May the Lord bless you and keep you all. May the grace of our Lord Jesus Christ and the fellowship of the Holy Spirit be upon you, God’s people and the whole world.”

Apostle Westerlund said that it was an honour to receive blessings from the Head of State, in terms of an approval or consent and fatherly blessing over them as young people.

“It is a privilege for us to have him bless us and send us off with a word of blessing. The trip is our third consecutive trip because the bible states how God will bless any nation that blesses his nation," he said.

“To me, I want to especially convey to my generation because of technology and the media that kind of distracts us from what the bible says.

“I want to re-instate the value of God’s word, we change throughout the years but the word of God stays the same.”

He said that aside from attending feast, the delegation will be touring historical, biblical sites like where Jesus was born in Bethlehem, and where he was believed to have died and also the guarding tomb.

“Visiting those sites is important because I believe that is the reason why our nation is blessed. Samoa did not have a set of morals or values before the bible came through John Williams," he said.

“Jesus’s ministry was birthed in Israel, the prophets of the Old Testament was birthed there. We attend church on Sundays and hear about verses of the bible being read out and recited, so our delegation is just going back to where it all began.”

There were some delegates that faced difficulties and challenges because it was a self-funded trip.

“If something is important, you have to pay the cost to get there. We acknowledge everyone who has supported us like families and friends," he said.

“We do not have a particular sponsor, if we believe God has called us there then we are determined to find a way to get there.

“Some of the delegates could not afford $10,000 but because they were determined not just through prayers but really work through getting the funds.”

He also thanked God that, at the end of all the hardships, they have plane tickets in their hands and are all set to go.

“There is a site in the old city of Jerusalem and there is a place where all the Jews go to and they believe that is a very historical place called the Western Wall," he said.

“We are going there understanding that there is great significance and we are taking the Government of Samoa and the Head of State to entrust our country under God because under God’s governance we are blessed.

“It is our prayer for God to invade our nation like never before, reduce crime, suicide when God’s grace abounds, sin or lawlessness diminishes. And we just want God’s glory to be filled in our nation in all generations in a way where we can recognise the value of the word of God and apply his principle to our everyday life.”

The delegation departs Samoa on the 6th of October and return on the 25th of the same month.