A robot – that five local students are building as their entrant into the 'First Global Challenge' international robotics competition in Dubai later this year – is 90 per cent complete.

The five Robert Louis College students, who were selected to represent Samoa in the global robot Olympics, said they are excited at the progress they have made following a crash course with mentors in the last four weeks.

The two mentors are the U.S.P Alafua Campus information technology manager, Le Mamea SIa Matalavea and Sleepwell Company general manager Teleiai James Potoi. Fonoti Ferron Fruean is helping out with the design and is making sure that the venue for testing of the robot is suitable.

"Progress is excellent ad I believe it’s 80-90 per cent complete but we need to complete a lot of things as well in order to improve," said Le Mamea.

The student robot developers have also given their robot a name, Bob Titilo, which is a reference to Tofiga's role in 'Take Home Pay'.

This is the first time Samoa has participated in the global robotics challenge. ‘Ocean Opportunities’ is the event theme which the students have to align their final product with.

Le Mamea said the goal of their participation is not just to make up the numbers but to try and win.

Teleiai echoed similar sentiments, saying: "We’re not there to taxi our robot around; we are actually trying to score points and compete, get maximum points."

"We want to be in the top 10, you know to be realistic but if we win it, we’ll be very very happy," said Le Mamea. 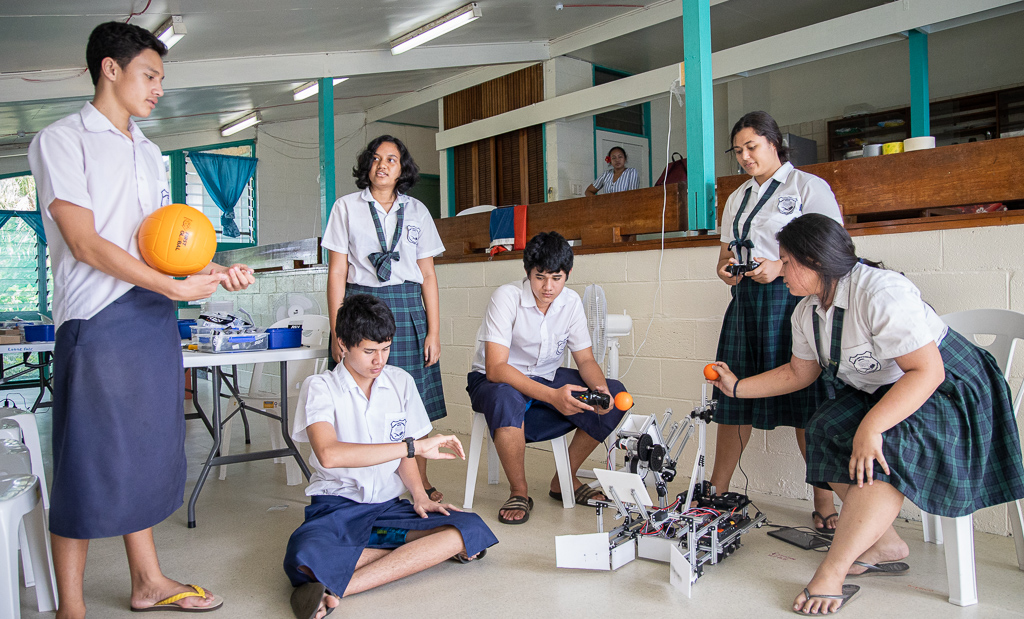 The students' robot-building worksite is at the U.S.P. Alafua Campus and was designed to be a replica of their workstation in Dubai, based on the idea that a robot that picks up trash and throws them into certain zones scores more points. The higher the throw the more points attained.

Their current set up in USP is an imitation of what the space would be like in Dubai, with the idea of a robot that picks up trash and throws it into certain zones to score points; the higher the throw the better the points attained.

"It's a simulation," explained Teleiai.

"We just say this (floor) is the ocean, and the yellow things (balls) are pollutants and we just want to devise a solution to pick up the solution and place them in where we want to place them, so it’s just like a simulation.

"So the whole idea about this is you have a problem, how do you solve it, and that is the key thing, because every robot will be unique."

Teleiai said they have had many versions of 'Bob': "Every country will have their own design some will work and some will not. We’ve done many versions of this because sometimes it’s a trialing error because you do something and find out there a problem in something, so you undo everything and redesign."

Despite running short of time and the approaching deadline, the student robot inventors have made progress.

"Most of the countries have had the opportunity to build a robot from June," said Teleiai.

"We only got this late last month, we only had four weeks. So this has been a crash course for us."

In three weeks of intense sessions, the five students were divided into groups to tackle each challenge presented, before assembling it into one to save time.

"I think we are really proud of what we have achieved in the time we were given, so we’re talking about American, Britain, England, Singapore who have had since June but as you can see we’re actually scoring points," said Teleiai.

"One of the advantages that we have, is for other countries they probably want to build a complicated robot, but the more complicated your robot is, the higher the chance of failure, so what we want to build is simple robust but effective, no fancy stuff."

Netzler, the team vice captain, echoed similar comments and added that they are relieved they are not behind.

"[It is] going really good progress is really good," said the 16-year-old.

"[We are] ahead of time we thought we’d be behind but were going on track so everything is going good at the moment."

"There’s nothing hard about this, when you put your mind to it, you can do anything. We don’t find this much of a challenge it is just something new that we’ve come across."

The five Form 5 students are Aukusitino Potoi, Julius Netzler, Victoria Amosa, Alexandria Matalavea and Marion Fruean. They will be accompanied by their teacher Masa Fa’asau and mentor, Lemamea Sia Matalavea.

They are expected to fundraise for the rest of their expenses while their airfares will be covered by the government of Dubai.

Teleiai said the group are aiming for a budget of $35,000 to cover accommodations, transit expenses, food and uniforms and have been getting support from businesses, sponsors as well as fundraising activities.

Last year only five Pacific Island nations represented the region in the international robotics competition. They included Fiji, Kiribati, Vanuatu, Solomon Islands and Tonga, but that has now increased to eight with the addition of Samoa, Nauru and Cook Islands.