Govt. and A.D.B. sign off on Apia Port project

The plan to upgrade the Apia Port will make it safer, more efficient and more environmentally sustainable.

That's the goal of a $166.8m project signed  by the Asian Development Bank (A.D.B.) Regional Director, Masayuki Tachiiri and the Government of Samoa on Tuesday afternoon.

The Minister of Finance, Sili Epa Tuioti, Minister of Customs and Revenue, Tialavea Tionisio Hunt and Minister of Works, Transport and Infrastructure, Papali’itele Niko Lee Hang, all signed the agreements with A.D.B.

The project is being done with a US$62.26 (T$166.8 million) grant from the A.D.B’s development fund and disaster risk reduction financing mechanism.

Samoa’s contribution to the project is US$12.77 (T$34.29) million, and works, beginning next month should be completed in September 2023. 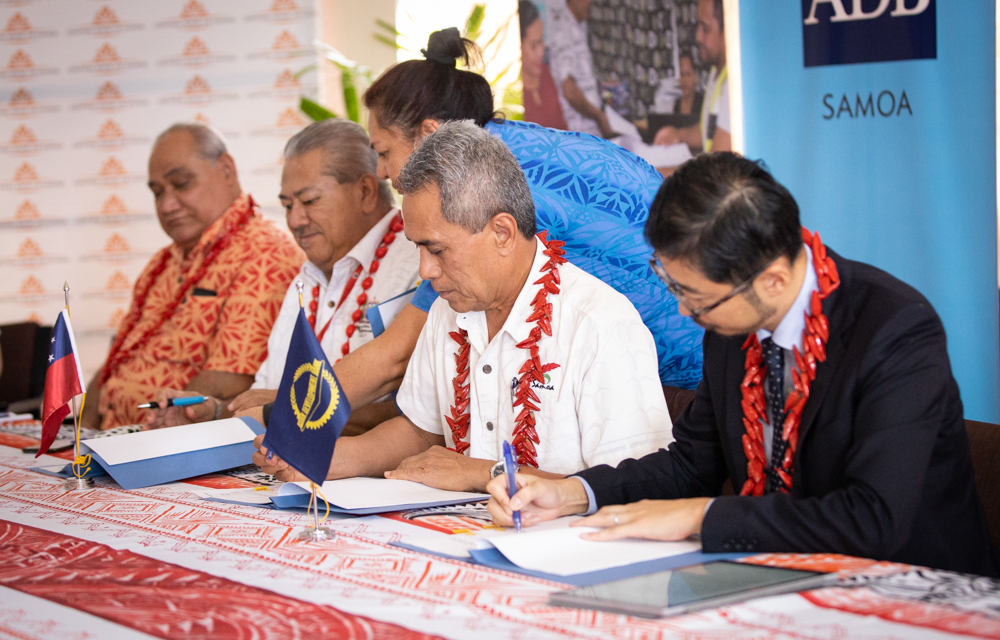 At the formal signing event, Sili said the grant will enable better safety, security and service from the port.

“It’s really looking at the port as a complete package, not just of the Ports Authority but also for the main government services operating on the port,” Sili said.

He said the improved security will ensure no drugs or weapons are smuggled into or out of Samoa, and all screening will be done at the border and not beyond.

“Obviously the investment in the container scanner is going to help with that, and ensure we minimise leakages of revenue at the port area.”

The Port’s development is intended to improve border security and trade.

Mr. Tachiiri, who runs the Bank’s Pacific Subregional Office in Suva, said getting the grant agreement signed is a “milestone."

“The Apia Port is a critical asset of Samoa. It is the economic gateway and also an important lifeline for the people of Samoa,” he said.

Just last year, the port was extended and the passenger walkway improved with funding from the Government of Japan, costing US$80 (T$214.923) million.

This new round of funding from A.D.B will pay for the rebuild of the breakwater to withstand storms and a predicted 0.4 metre sea level rise over the next 50-100 years.

The wave swell which enters Apia Harbour from the north, cuts at least 20 good berthing days a year and affects trade, especially during the rainy seasons.

The damaged breakwater, battered by several cyclones, will see its 100 metres repaired to combat the swell and protect against future climate change impacts and natural disasters.

Dangerously stronger seasonal waves during the wet season are less easy to control using the breakwater, so the project will include a wave-monitoring system and early warning system, to make berthing and navigation safer.

It will also improve the ports ability to handle more container ships. According to the bank’s final report and recommendations by President Takehiko Nakao, the terminal today is inadequate to meet projected demand.

Chief Executive Officer of the Samoa Ports Authority confirmed the development will include making the port capable of powering 300 reefer containers, or refrigerated shipping containers, up from 120.

The terminal area needs to be increased at by least .5 hectares, and several safety elements need to be addressed to make customs and trade more efficient.

It also processes customs inefficiently, taking 38 hours to clear imports. The project hopes to get that down to just 12 hours by 2023.

It will also pay for a much needed container scanner. To complement this, the New Zealand government is helping the Ministry of Revenue build an intelligent customs management system and is developing capacity building programs on border control.

The Ministry of Revenue is expected to use tariffs to pay for the maintenance costs of the new x-ray scanner.

“That’s the responsibility of the Government of Samoa,” Minister Sili said.

“We have been working really hard with the Samoa Ports Authority to improve governance and asset management capabilities and to ensure that when they make profits that they put aside funding to ensure ongoing maintenance of the facilities.

“The Ministry of Finance will make sure we do provide funding support where required to ensure we will enjoy the new climate proofed and very secured port facility for the use of our people and our businesses.”

Finalising the Apia Port development has not been without its challenges. During consultations, families in Matautu expressed concerns the refurbishments would cause damage to their commerce and family lands, including coral reef reserve Palolo Deep.

In March, reserve owner Sagalemanaia Jack Laban told the Samoa Observer he is hoping government will at least compensate him for any losses caused by the work.

But the environmental assessment completed by the bank considers any ecological impact caused by the construction to be ‘minor’, and does not predict any impact on the western reef or turtles in the area.

It does state the breakwater reconstruction will cause the affect 10,000 square metres of the sea floor habitat, but it is already “highly modified,” or affected by the existing breakwater that damage would be “minor.”

To learn more about the project ‘Enhancing Safety, Security, and Sustainability of Apia Port Project’ visit the A.D.B website.