Samoa is among the first in Polynesia with the ability to see 11 metres below the ground using the latest radar technology.

The National University of Samoa (N.U.S.) has acquired a ground penetrating radar machine (G.P.R), which scans the ground using a 350 megahertz antenna.

It can identify the details of what lies beneath, including building materials, pipe and electrical fittings, and human remains.

Two senior lecturers in the Centre for Samoan Studies Archaeology and Cultural Heritage department believe their new 2018 GSSI UtilityScan radar can change not only archaeological work in Samoa but also construction and development.

“What we are doing is trying to increase the efficiency of archaeology and preservation to protect the burials, the important sites, as opposed to cultivation pods that are not so important, like ufi (yam) pits.” 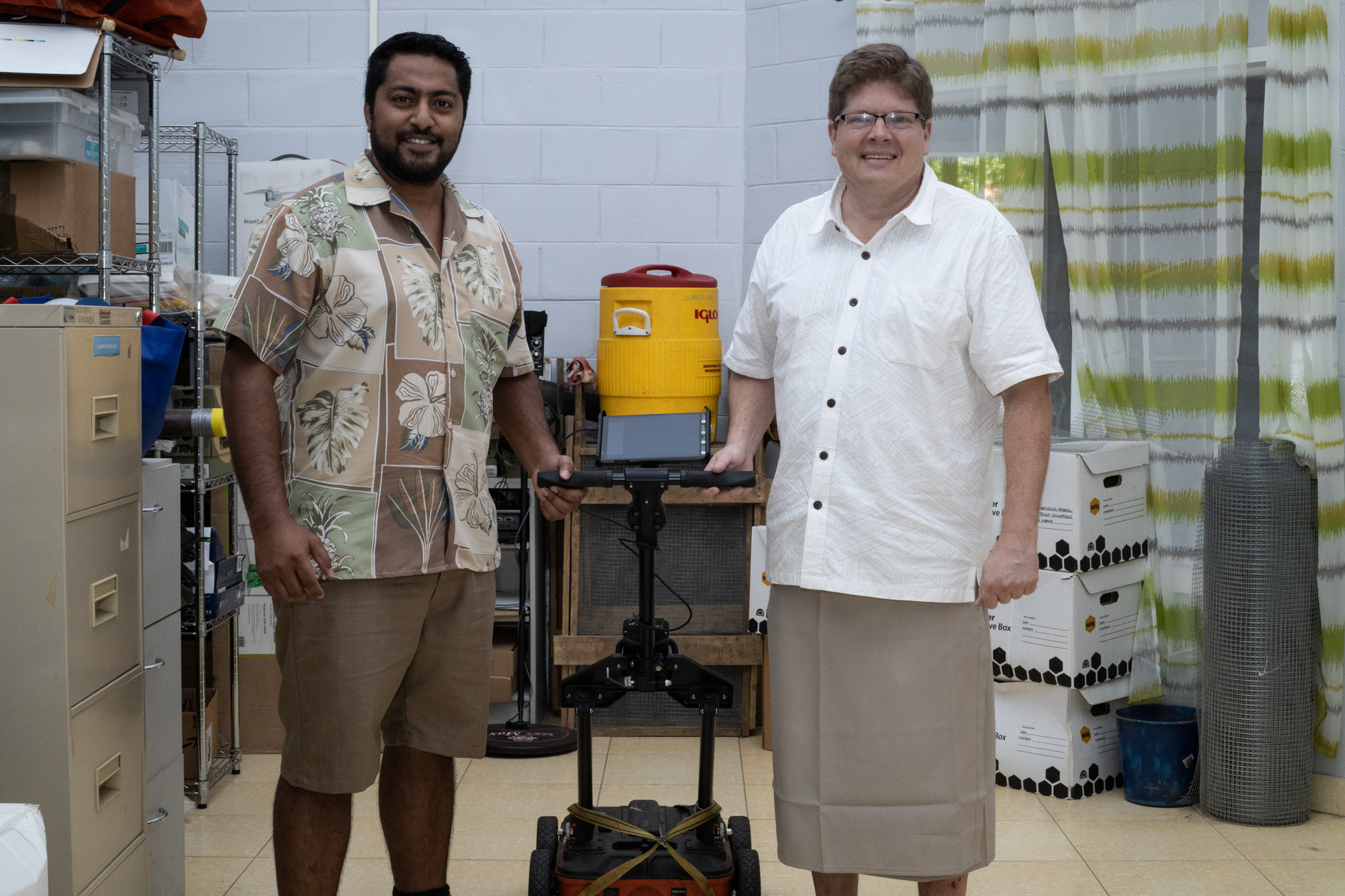 From the surface, yam and papaya cultivation pods look similar to ancient burial pods. They were both either ovals or circles of boulders near homes, and were not particularly deep, so it was hard to tell them apart.

“Before this new technology, Mohammed and I had to go in there with shovels and screens and excavate everything, and it could take two weeks.

“Now we can use the ground penetrating radar, we can peer five metres under the ground and quickly tell if this is a burial or something more mundane, that is not so sacred or important to culture,” he said.

The differentiation between burial and non-burial pods was the topic of a paper Dr. Klenck and colleague Senior Lecturer Mohammed Sahib published last month.

They found the G.P.R helps them quickly distinguish between the two, scanning just three metres below the ground.

Dr. Klenck is a Professor in Archaeology, who studied in Harvard University.  He arrived to Samoa in June and is hoping to scale up the application of archaeological sciences in Samoa – putting their work to practical use.

“We can get all this information very quickly, and then if we see something special we can tell construction companies, here is the live wire, here is the water main, here is the collection of burials.”

Mr. Sahib graduated from N.U.S in 2014 with Samoa’s first ever Bachelors in Archaeology. He recently returned from the University of Otago where he completed his post-graduate studies in archaeology.

The two have established the laboratory for applied archaeology and hope to inspire more students but also the wider community who should be interested in the remains of ancient Samoa around them.

The pair is already putting their tools to good use. As the Government of Samoa prepares to widen and develop Central Cross Island road, Mr. Sahib and Dr. Klenck are hoping to help survey around it to look for burial plots, or even buried pipes or wires to look out for.

“We have proposed to them, we have got the full package to do the research or survey around there,” Mr. Sahib said.

“We can help provide the work locally.”

Today, the C.S.S archaeologists have several essential tools at their fingertips, including a magnetometer to detect metals in the ground, a drone and lidar capabilities (radar for distance).

“We can look above ground, through the trees to see if there are archaeological sites,” Dr. Klenck said.

Dr. Klenck said these technologies will help Samoa deepen its knowledge about its rich 3500 year history, which has already been thoroughly studied.

“We want to apply the new technology to the former studies to increase the knowledge of Samoan archaeology, that’s our goal.”

Right now there is no requirement for construction firms to survey land for historically significant artefacts, Mr. Sahib said, something that perhaps should change.

With the G.P.R, he hopes construction companies will be eager to ask their team to do those surveys because of how efficient it has become.

It will also be done locally and so more cheaply, Dr. Klenck said. Before June, that would have had to mean hiring an international surveyor to travel to Samoa for the work, and delay the building process significantly.

Without a G.P.R, construction companies building a new site go in blind, and often do not know if they are destroying ancient and sacred burial sites, or archaeologically significant plots.

If an archaeologist was able to inspect the scene, they would have to determine whether the site was special, or more mundane.

There are 50 students enrolled in the archaeology programmes today, 22 of which in their first year. Mr. Sahib said the school is also developing a specialist geographic information systems (G.I.S) course for students, as well as a masters and PhD programme.

“What we would like to do is give them jobs, so they have something to bring back to their families,” said Dr. Klenck.

The masters and PhD programmes should take these students to the “next level.”

“If they want to go and do other studies we want them to have the latest technology so no matter where they go in the world, they will be at the very top one per cent in terms of knowledge of archaeology and historical perseveration.”

The lecturers said their studies should equip them to work alongside engineers, construction firms or historical archaeologists.

“Any of our students can go out and make an immediate impact on the Samoan economy, and be real additions to their jobs,” said Dr. Klenck.