“I think they know that the game’s there, that we can compete with the teams that like to play fast football,” Vaeluaga Steve Jackson said. (Photo: Getty Images)
Rugby World Cup
Manu Samoa
Rugby union

Manu Samoa coach Vaeluagaomatagi Steve Jackson thinks his team’s games leading into the Rugby World Cup have given them exactly what they needed, notwithstanding their loss on Saturday night.

“It’s been a perfect build-up for us,” he said.

Vaeluaga said Saturday nights 34-15 loss to Australia was just what was required to see where the team stack up against Tier One opposition:

“To know that we’re just about there, and if we can stop making silly mistakes and our own errors, we’re right in the fight.

“We’ll take some real good positives out of that game.

“There’ll be a few little things that we just need to correct.” 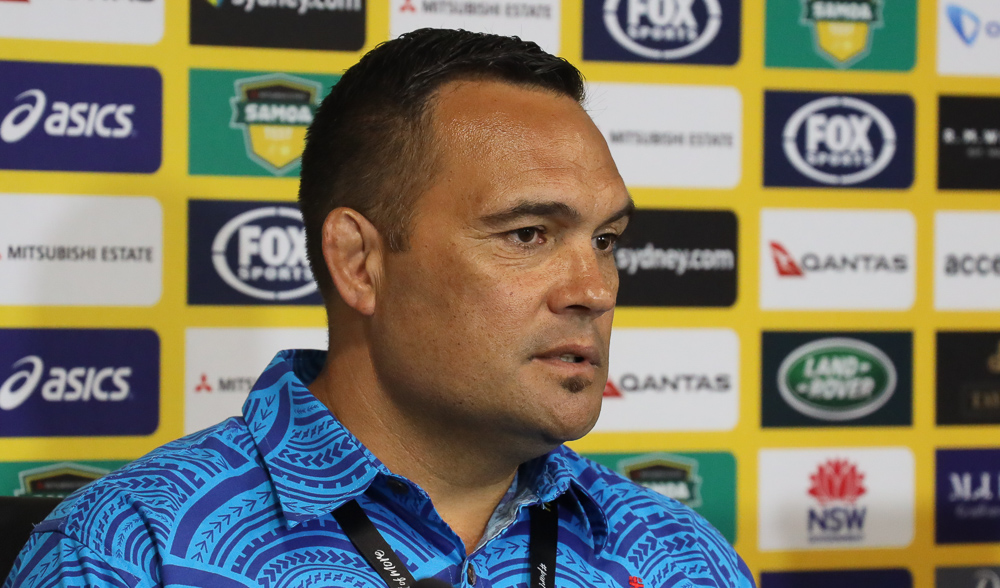 He said his team are feeling good despite the loss, and without a doubt the Wallabies are one of the best teams in the world.

“I think they know that the game’s there, that we can compete with the teams that like to play fast football,” Vaeluaga said.

With Samoa playing Tier One sides Ireland and Scotland at the World Cup in Japan, the coach said there is definitely belief in the side they can take a big scalp:

“It’s getting bigger and bigger every game that we play.

“From our point of view, we’re building nicely we think.

“Within our group we’re pretty close knit, we know where we’re heading and hopefully we’ll get there.”

Vaeluaga said they would love to play Tier One opposition like Australia every day, but based on previous performances and Samoa’s World Rugby ranking, some would question whether they deserve to have those games:

“But you only get better when you play better teams.

“Tonight our players stepped up because they know they’re playing against the best in the world.

“To be here at Bankwest Stadium, a fantastic facility, and play on a terrific field against arguably one of the best teams in the world, for us has been great.”

The Manu will go into camp in Japan from Tuesday, 13 days out from their Rugby World Cup opener against Russia.