The horizon is the compass and you are the needle: On board the Va’a Gaualofa

"This is my fa'aSamoa." Captain Kalolo Steffany has lived on the Gaualofa for the last year. (Photo: Vaitogi Asuisui Matafeo)
Fa’a Samoa

It’s a short, choppy ride from the seawall behind Malaefou Park to our destination. It’s windy, we get splashed a little, though luckily an umbrella is taking most of the hit.

Ahead of us is the Va’a Gaualofa – Samoa’s double hulled canoe, donated in 2009 by Okeanos Foundation for the Sea. She looms large and a set of solar panels glint from her stern.

Captain Kalolo Steffany greets our team, and we awkwardly climb a ladder on-board from the small dinghy that brought us out to sea. Behind us, crewmates Mao Onesemo and AJ Bartley leap up, light as feathers.

When we sit down to speak, we are offered cups of ava which is shared around the crew, and while the interview goes on, the tanoa empties.

They explain the purpose of our tour: for 3000 years Samoans sailed from island to island using only the elements to guide them. The Samoa Voyaging Society is hoping that can happen again aboard the Va’a Gaualofa. 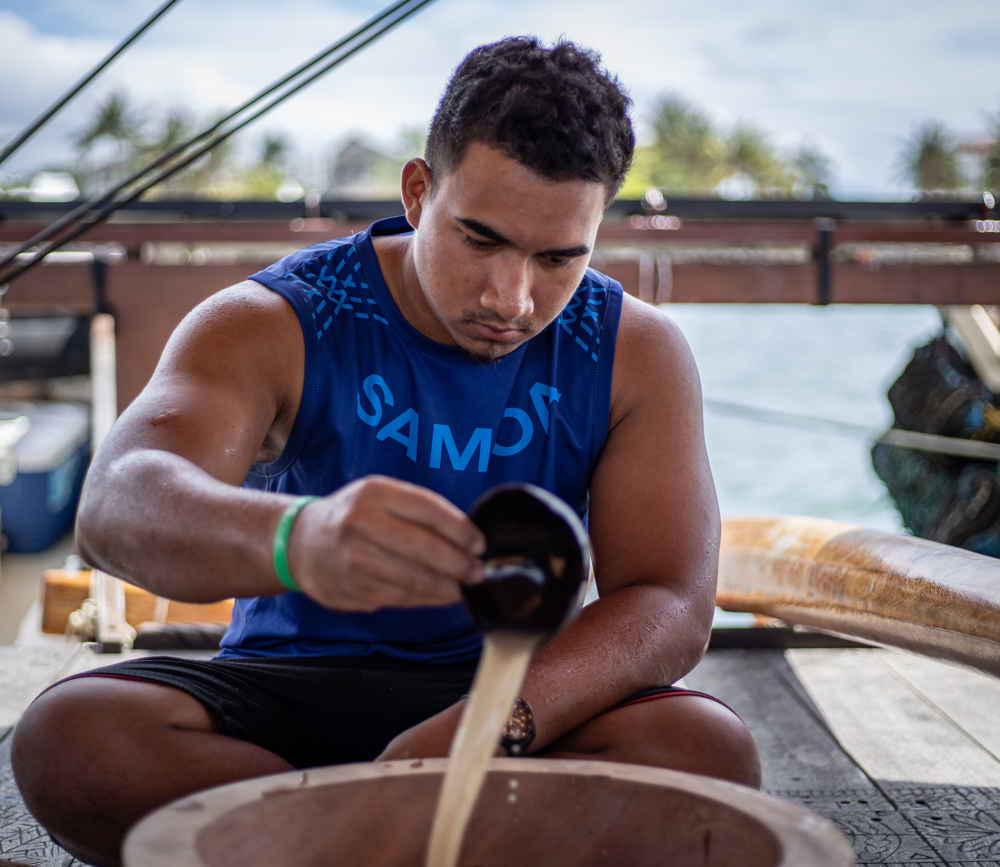 He, Mr. Onesemo and va’a engineer Roman Waterhouse live on the va’a fulltime, maintaining and protecting the vessel.

“You wake up to the best sunrises and the best sunsets, you always have the breeze. You have to conserve water, conserve your food, and keep your space clean.”

“We fish every day,” Mr. Waterhouse adds. “You guys want some raw fish?”

Va’a Gaualofa is looked after by the Samoa Voyaging Society (S.V.S). Manager Paula Schaafhausen said its most important purpose is to help revive the art of navigation, once the bread and butter of Samoans, and all Pacific people.

She wants more people to learn how to sail, and experience how their ancestors travelled, and were connected with their surroundings. And with regular long distance voyages taking place often, that is a real option for anyone interested enough to learn.

“To be on the ocean and to see the big beautiful sky at night and you look out and there is phosphorescence in the ocean, it’s just magic.

“To be able to actually sail somewhere with purpose, to another island and get there safely would be quite exciting.” 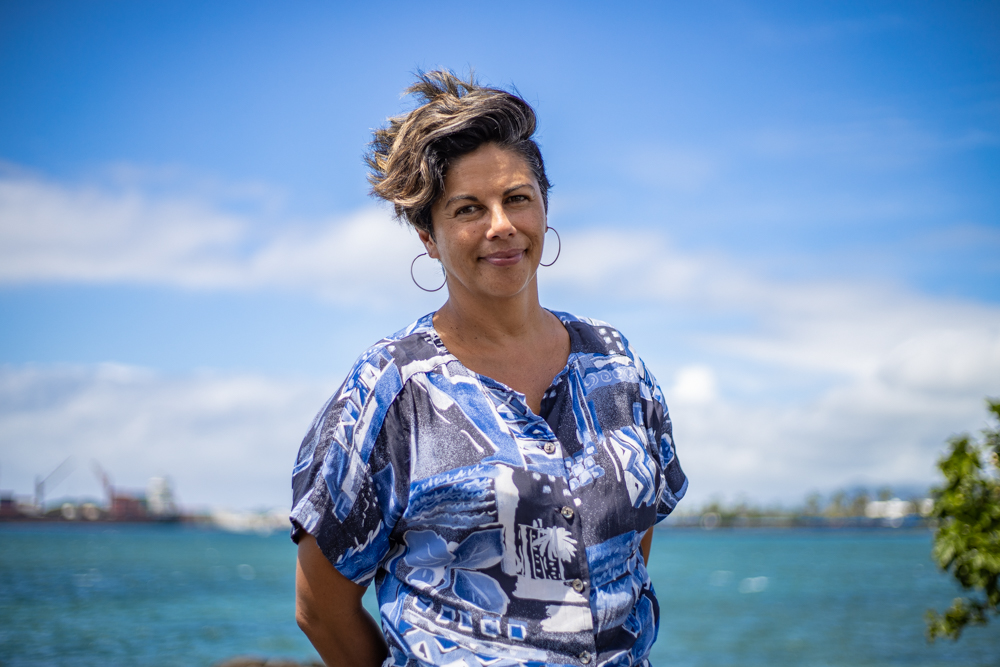 Captain Steffany is has fully embraced the art of navigation. He sails exclusively by reference to the wind and stars, sailing between islands near and far without modern-day equipment.

“Our ancestors; their science was the stars. They used it for their watch. They can predict weather based on the constellation of the sky. The sailors, they navigated from here to Tonga, from here to Fiji," he said.

“It’s like their compass. The horizon is the compass, and you are the needle.

“But you have to learn where each star is rising from and setting to, where the wind is blowing from and then you can predict where your va’a is going.”

Mr. Steffany has lived on-board the va’a for more 12 months. He said moving to life on the water was a deeply intentional choice.

“Some people have decided to find jobs, and to start a family, some people decide to play rugby, some decide to travel the world, and I decided to sail va’a,” he said, smiling. 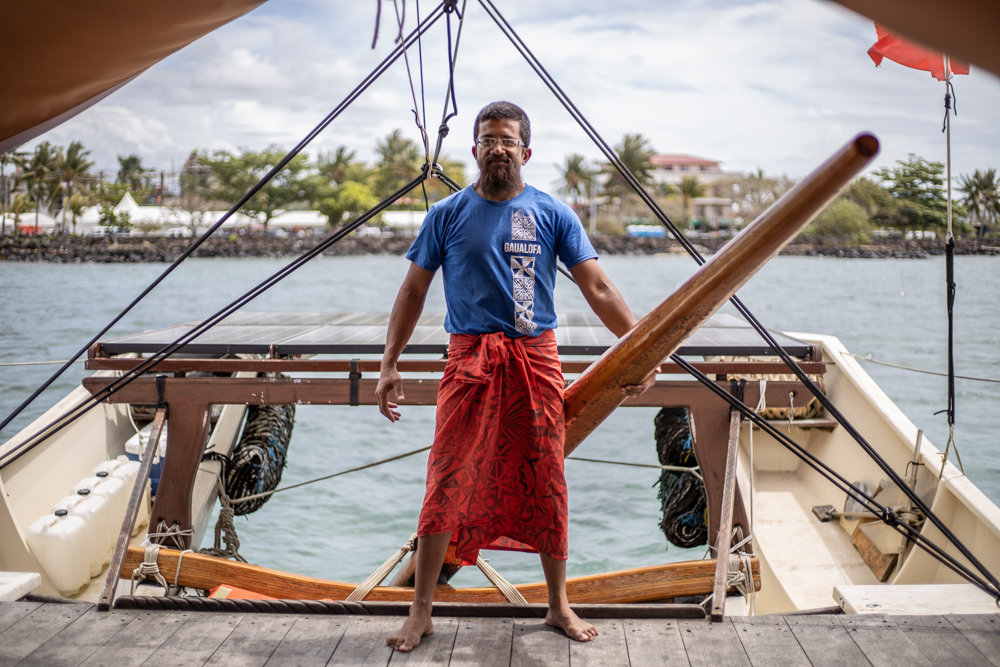 Onboard the va’a, this intimate connection with Samoan culture is everywhere, and not just in the ava bowl.

The deck is spotless and everything has its place, tucked away into nooks and crannies below deck. The festive sails are marked with Samoan symbols, and the tiny kitchen smells faintly of taro.

Under the fo’e or tiller is an intricate carving, intended to be a sundial. Laughing a little, the captain said it was “miscalculated” by some degrees, so works more like a slip-mat than a clock. 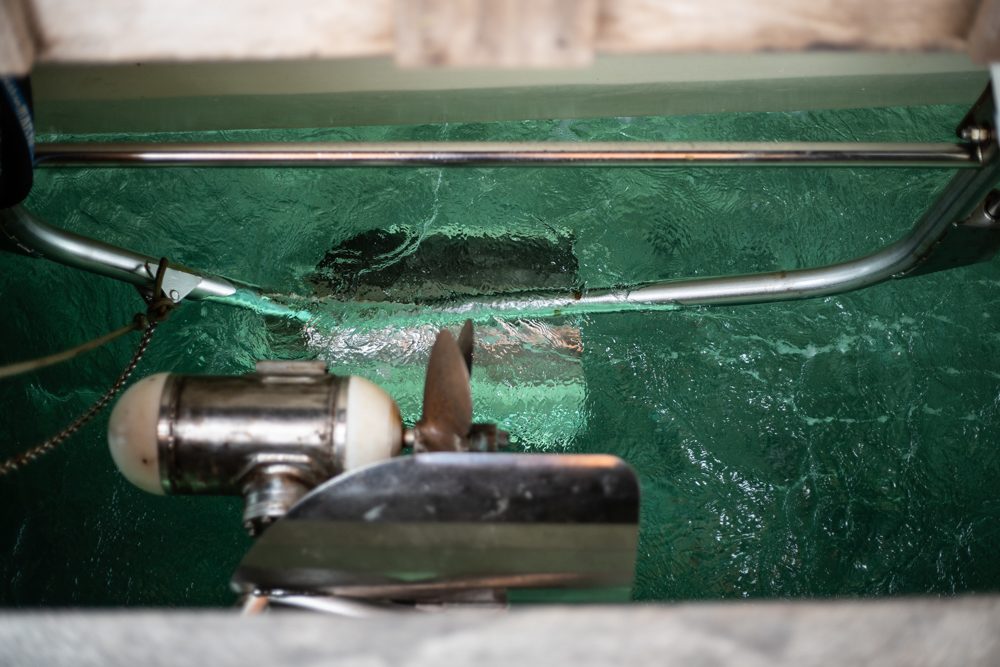 The va’a is mostly powered by the weather too. Those glinting solar panels charge and run the engine, and just a small amount of gas comes on board for cooking. There is a G.P.S on board, but the crew are determined to follow their ancestor’s teachings.

“For me I always try to know what the weather is, what the wind is doing. That can determine if we can sail or not,” Mr. Steffany said. It’s not always easy though. Once predictable, the seasons are not as clockwork as they used to be, a result of globally rising temperatures.

“Our dry season has been a bit rainy and the weather is a bit off. So we have been looking on the weather news too and what they say.

“We are all learning, little by little.” 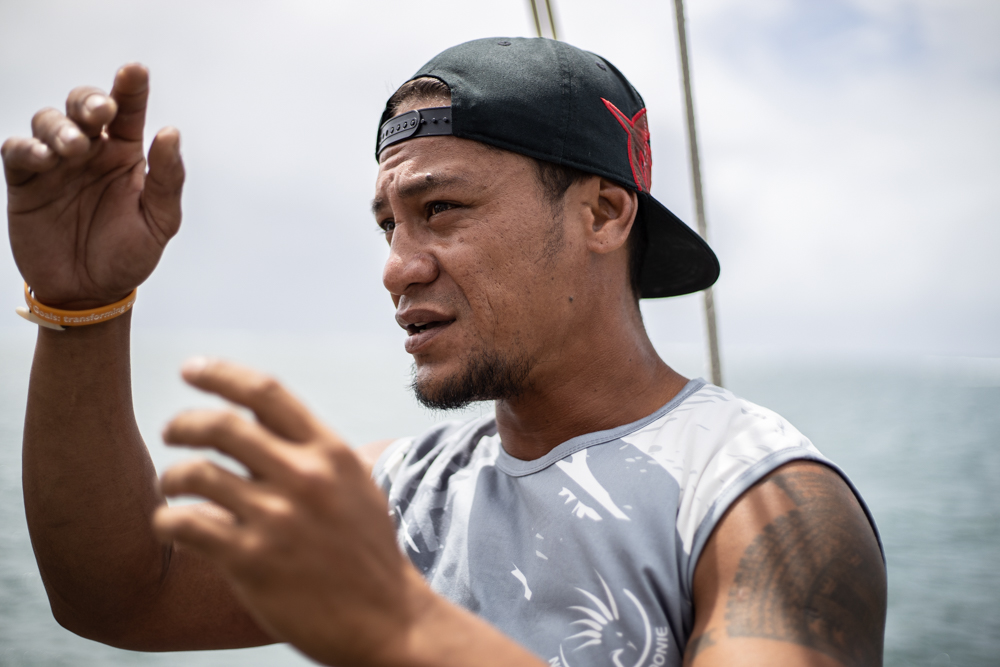 Crew member Mao Onesemo said sailing long voyages is both a physical and mental challenge. It tests your limits, being out in the open, with just you and the crew on board.

The Gaualofa’s hulls sleep 16 people, packed like sardines into the sleek underbelly of the vessel.

“It’s not for everyone,” Mr. Onesmo grins, laughing at the two of us squeezed in between the bunks, incredulously looking around. 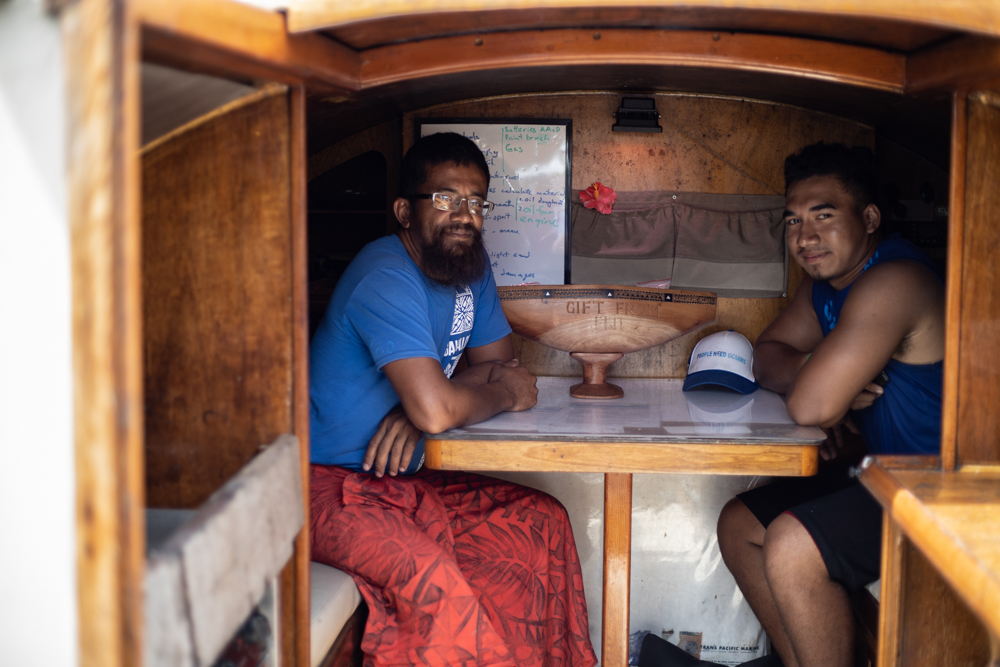 “But you’re only sleeping for a couple of hours, otherwise you’re on duty, steering the va’a.”

Voyages can last anywhere any length of time – it all depends on where you are going. And being able to live for weeks on end with the same crew, in the same space, is not easy.

“It teaches you a lot of about people, and about yourself,” the sailor said.

“Things can get on your nerves, or play tricks in your head, but we find ways to entertain ourselves – play ukulele, make drawings, drink ava.” 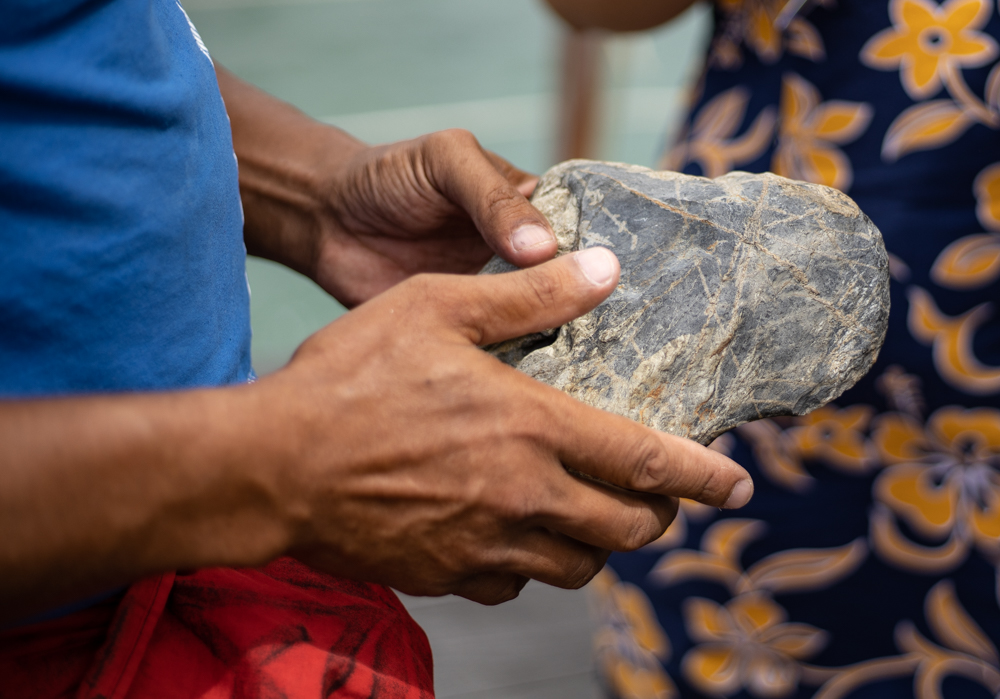 Around 20 people are active members of S.V.S, thought there are 100 on the books. Ms. Schaafhausen wants to see more people excited about, and involved in the care and maintenance of the vessel, and learning the art of sailing it.

When the Gaualofa was first moored in Samoa ten years ago, there was a wave of interest in it, she said. But the va’a is not seen too often around Apia, and people appear to have lost excitement.

“That is all going to change,” she said. Just two weeks into the manager role, Ms. Schaafhausen has sat down with both the Ministries of Tourism and Education to see how they can help push their va’a into the public eye. 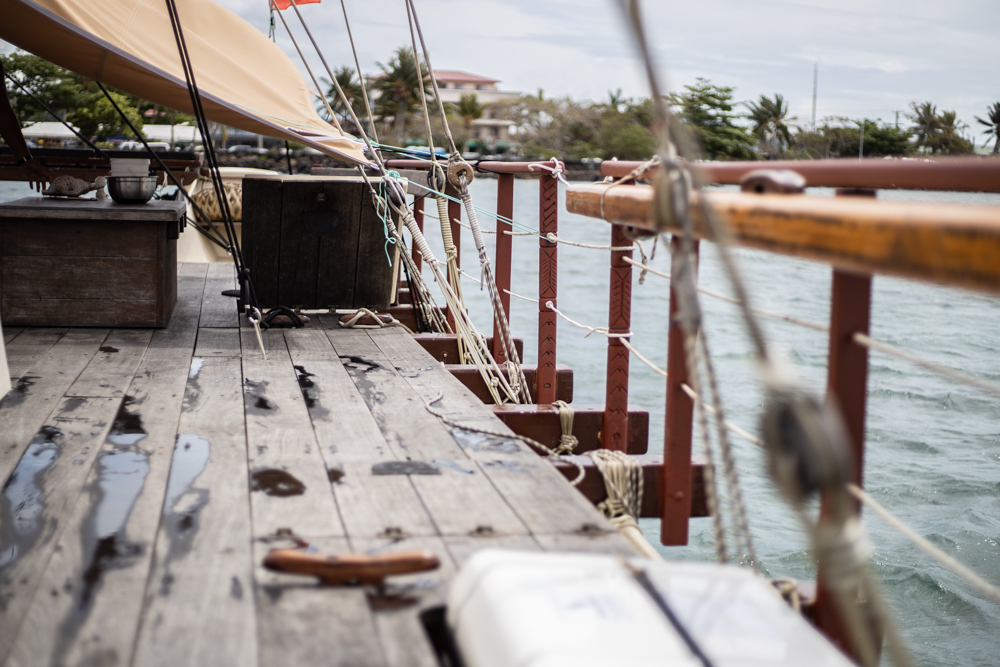 Importantly, the Samoa Ports Authority will hopefully issue them a permanent mooring spot in Apia Harbour.

“It’s such beautiful boat, and it’s such an interesting thing to look out at all the brand new boats, and see the beautiful Gaualofa sitting there, double hull, traditional voyaging canoe,” Ms. Schaafhausen said.

“It’s too good an opportunity to Samoa not to grab it and run with it.” 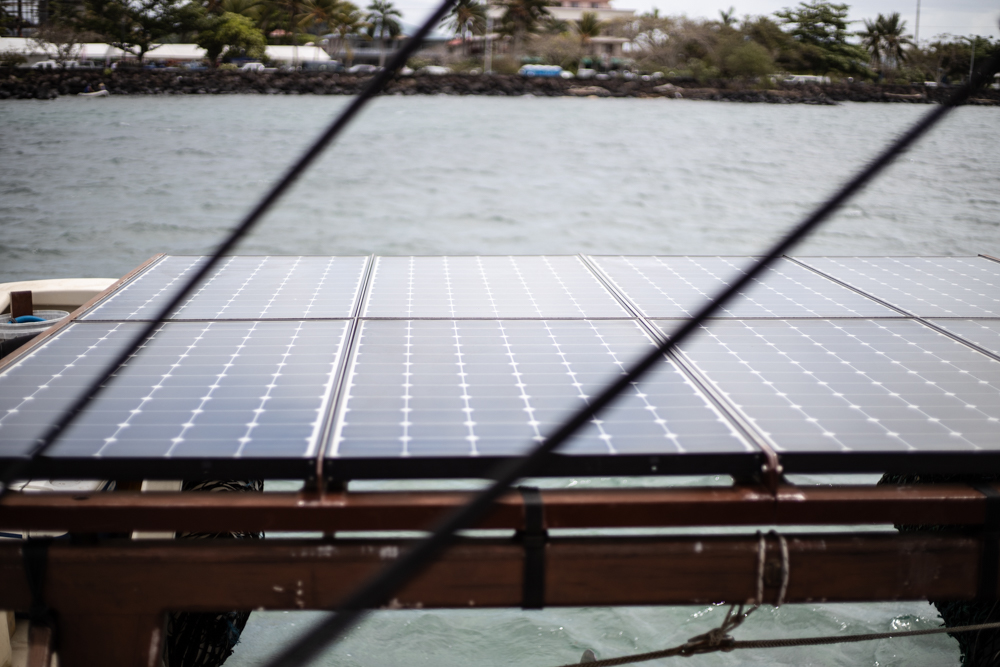 It’s a pricey piece of equipment to run.

“Everything from mooring, keeping crew on there 24/7, gas to take out the dingy, toilet paper, fresh water is expensive,” Ms. Schaafhausen said.

“And that’s just the small stuff. If anything goes wrong it’s expensive.” 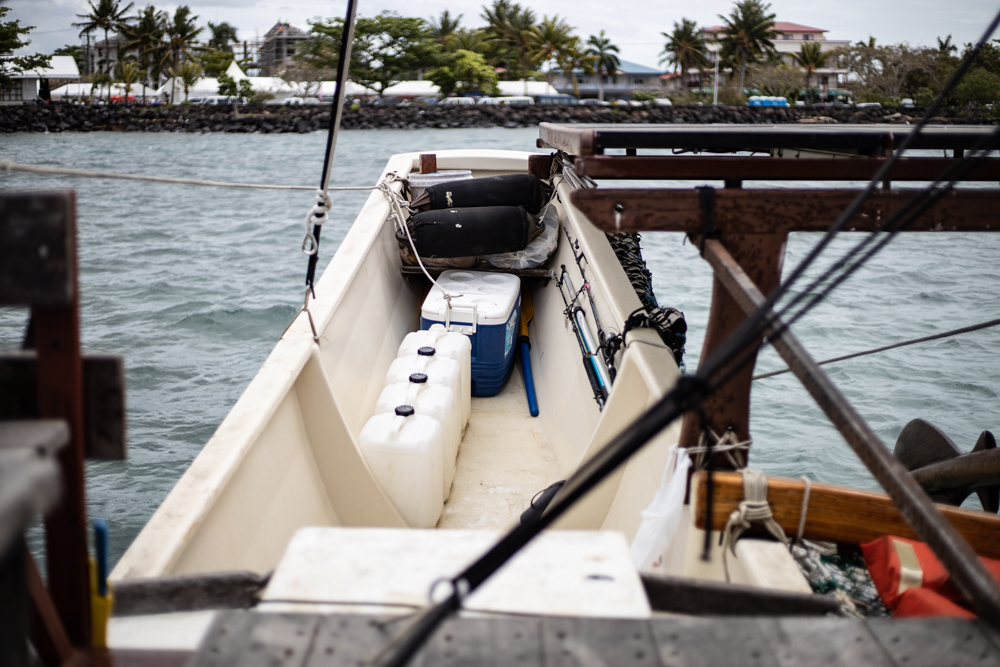 Next month during the king tide, S.V.S and the crew will bring the Gaualofa onto the beach for a ‘defouling:’ an essential process of cleaning away barnacles and repainting the boat’s exterior.

Anyone is welcome to come and help, and “get their hands dirty” to keep the va’a voyage ready, she said.

“Just like we go to a fiafia night and it’s no big deal, I want people to feel like that about the Gaualofa,” Ms. Schaafhausen said.

“We want this to be part of Samoan society.”