And landscapes of Samoa should be painted by its people.

That’s why this year’s annual Manamea Art Studio exhibition is on the Motherland: scenes from every corner of Samoa, by Samoan artists.

The 50 pieces show landscapes from 21 locations in Samoa, from far flung Namu’a Island in Aleipata to Falealupo in Savai'i.

“Landscape art is quite an old fashioned genre of exhibition,” Ms. Mariner said.

“It’s really old school and that is another reason we wanted to do it, it’s often associated with the old masters, British artists, and European art.”

Landscapes should be by indigenous artists, Ms. Mariner said, and too often Samoa’s scenery is painted by holidaymakers, visitors or even artists abroad following photos online.

“If you are going to look back at the art that was made in Samoa 100 years from now, I want there to be art made about the landscape made by the people who live in it and are born from it,” she said.

Ms. Mariner and her husband Lalovai Peseta who run the studio wanted to give their team a chance to unwind, and take in the beauty of Samoa. They closed the studio for a week, rented a van and travelled across the country focused on nothing but painting.

The Samoan relationship to land is deep and runs across many generations, she said. Painting the ‘Motherland’, especially home villages or spaces with a lot of meaning allowed the artists to dig deep.

Pele Tamiano spent time painting the lava stricken church in Saleaula, where his family’s lineage is from.

“When he was painting it, it was imagining his great-great-great grandfather, and the fear of the lava coming down over his village,” Ms Mariner said.

“I said to him, the people who suffered there, they are your blood. Imagine you’re on the plantation and the lava is coming over your house, and your new wife is in there, and your baby.

“And this is what he painted after we talked, knowing that land is where his family's blood is." 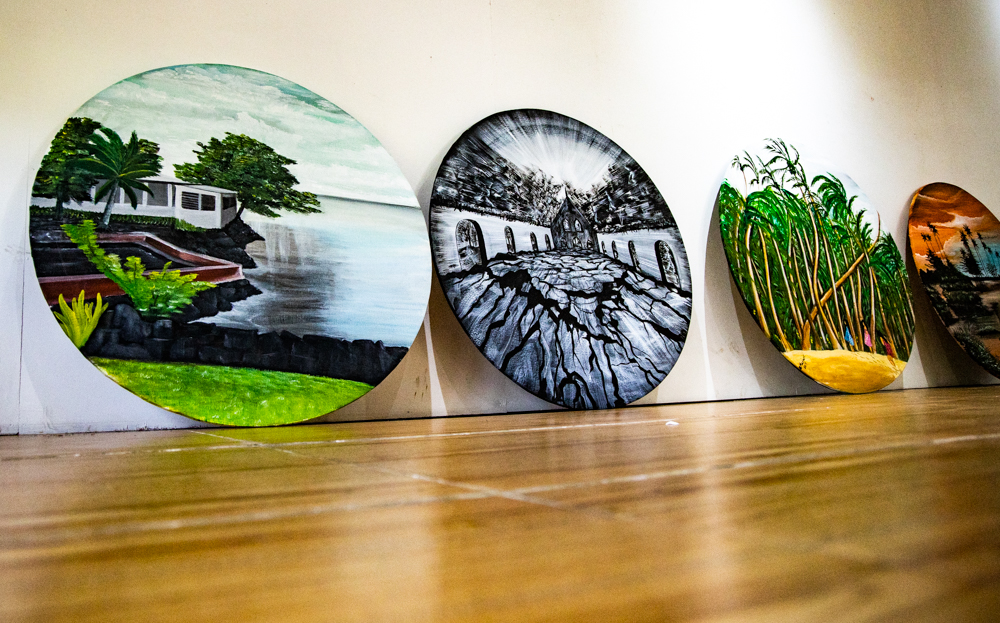 The result is frightening at first, but mournful the longer you spend with it. Mr. Tamiano has managed to present the church in its final moments, and takes the audience to that moment the lava broached its walls.

Other paintings, like William Mauola’s depiction of his grandfather’s house on the water’s edge are more peaceful. Mr. Mauola captures the shimmer on the ocean they way many will know well. It is familiar, and feels like home.

“Samoan’s connection to their land is so deep, so I thought it’s appropriate that we paint it. We paint our home villages, scenes that mean something to us.

“Every painting in this exhibition, every place was chosen by the artist because it means something.”

It was a busy week, but refreshing, Ms. Mariner said. They filled their van with homemade ‘travel’ easels and canvas, and lived off of masi popo, noodles and tinned fish.

“We would wake up, and just paint. All day,” she said.

“It was so refreshing, and so bonding for the team, there was no work hierarchy.

“All of us were in the zone for painting, driving along saying oh, look at that sunset, look at that tree, and introducing each other to our villages.” 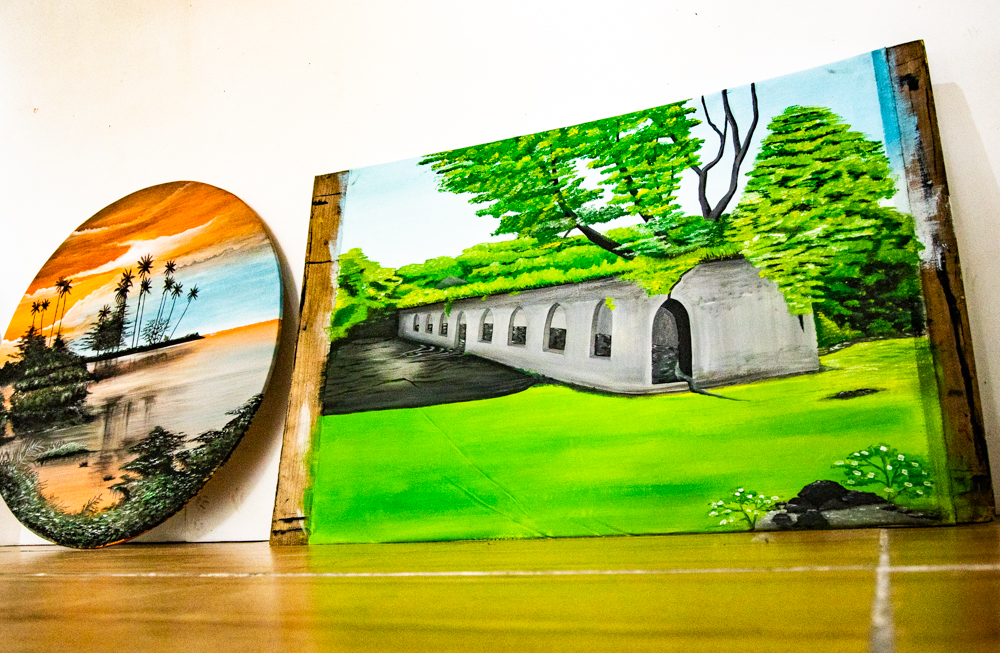 Each painting will be exhibited with a photo of the scene, and an explanation from the artist about it, and they will all be for sale starting from $250 tala.

The annual exhibition is the team’s only chance during the year to paint for themselves and display their work, rather than making and selling commissions.

During the year, Manamea keeps the doors open through its birthday key carvings, and painting commissions. And after they painted a mural in the children’s ward of the National Hospital in Moto’otua, they have had several more requests for murals.

For their exhibition tour, the team had help along the way, with subsidised and sometimes free accommodation at Namu’a Island Beach Fales, Moega Amanaia Beach Fales, Falealupo Beach Fales and sponsorship from Island Hopper Vacations Samoa.

“We are really hard working, and really passionate about doing art in Samoa,” she said.

“If we don’t make these keys, we don’t eat, and we support a lot of people on the art we make here.”

“This exhibition is for Samoa.”

Motherland opens on Thursday evening at 6pm, and entry is free. The Manamea Art Studio is in Vaigaga.