The official residence of Japan's Ambassador to Samoa was officially opened Thursday night at the Taumeasina Island Resort.

The Japanese Ambassador said the occasion confirmed his personal commitment to facilitate diplomatic relations and deepen the cooperation between Japan and Samoa through one-on-one dialogue.

“The occasion highlighted his personal commitment to facilitating diplomatic grounds for deepening cooperation between Japan and Samoa by enabling a face to face communication with our Samoan counterparts," he said.

“I am particularly delighted to provide opportunities for enabling my Samoan counterparts to experience “washoku” Japanese cuisine culture." 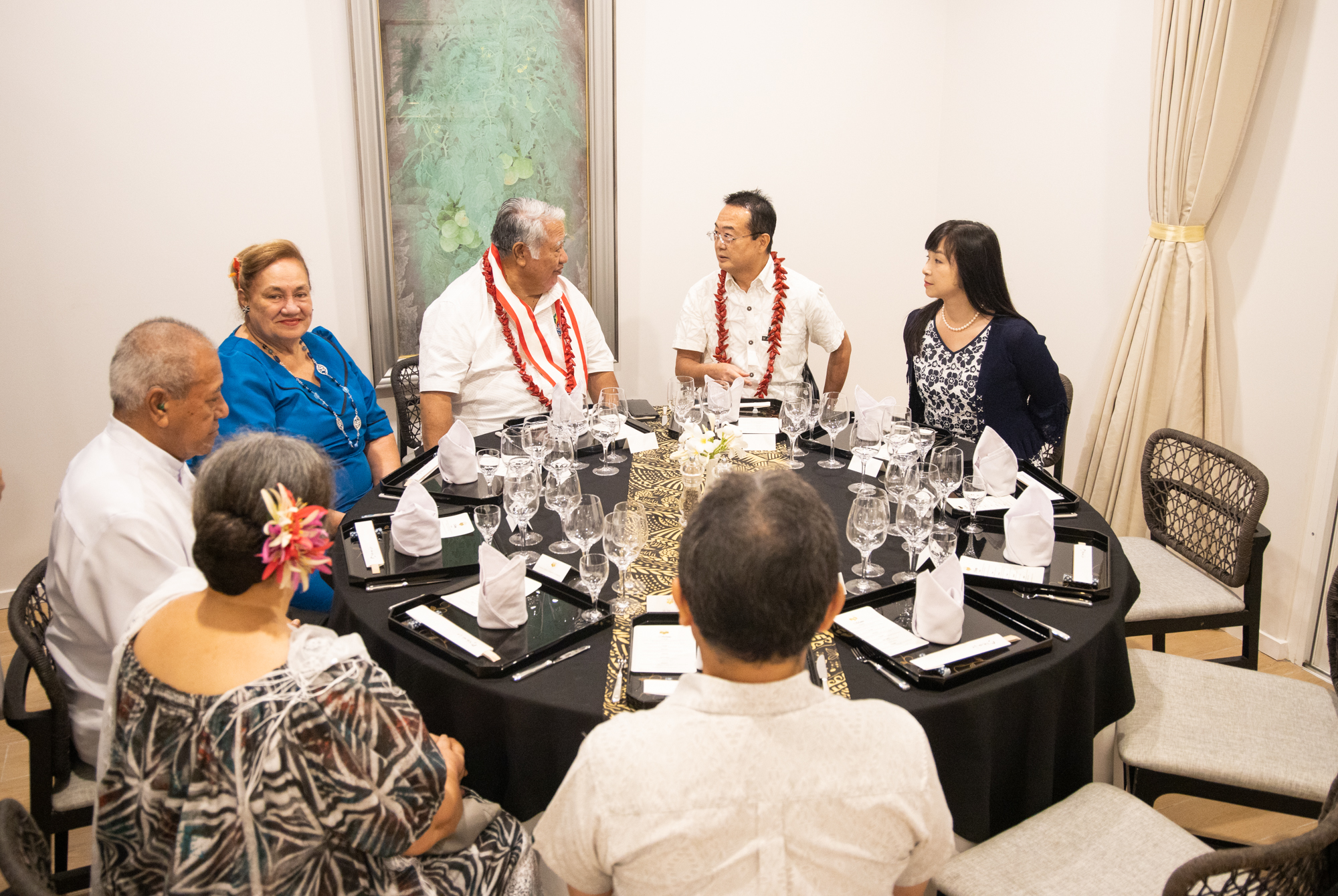 The official residence of the Japanese Ambassador will also have its own chef, whom Maugaoleatuolo said he personally recruited to work in Samoa.

“Thus, I specifically recruited a Japanese exceptional chef from Japan, Rikio Moto who will serve my residence and he is very excited to explore Samoa and its local ingredients that will express Japanese tradition in cuisine and serve the best on island," he said.

“Let me briefly unveil the estimable conferment that Tuilaepa received in May last year, during his official visit followed by attendance at the Palm 8 Summit meeting in Japan. 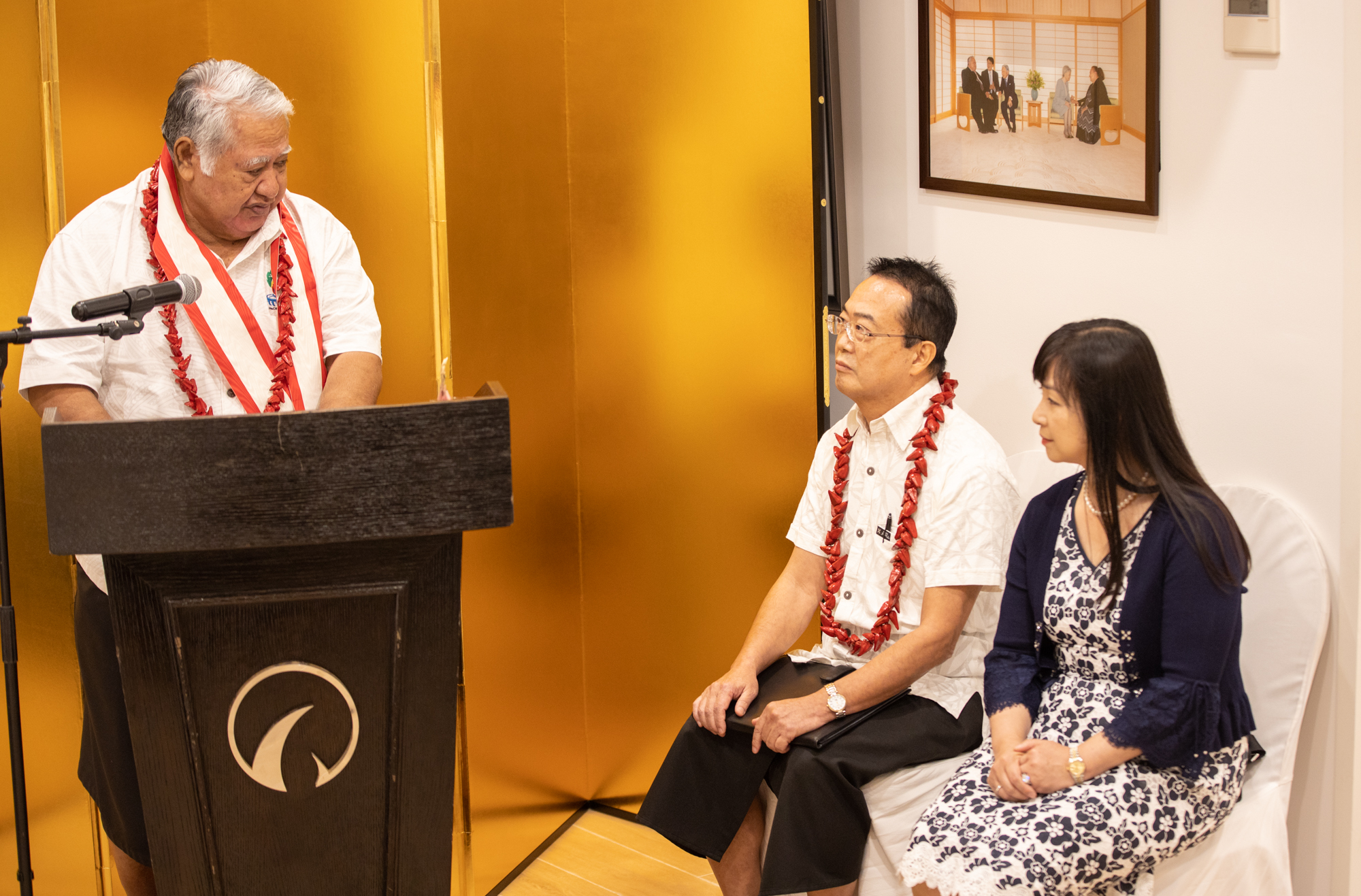 “The Grand Cordon of the Order of the Rising Sun as you can see worn by the Prime Minister, is the highest Japanese Decoration awarded to non-Japanese nationals who have made distinguished achievements in bilateral relations and promotion of friendship between two countries.”

Maugaoleatuolo stated that the order was awarded in the name of the former Emperor of Japan, His Majesty Emperor Akihito in recognition of Prime Minister Tuilaepa's dedication and passion in strengthening bilateral ties and promoting friendly relations between the two countries. 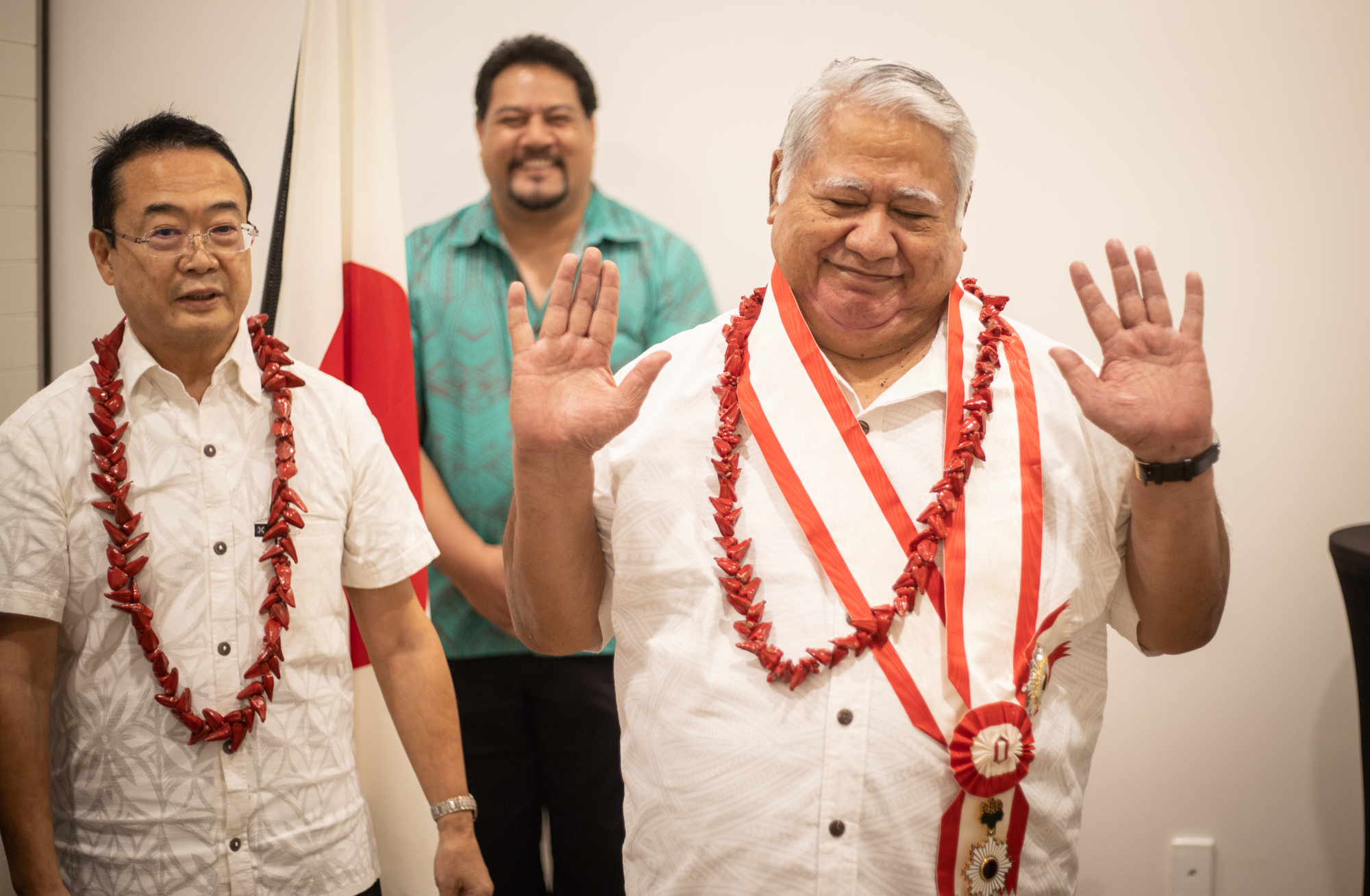 “Thank you Tuilaepa for all you have done over many years for the friendship of Japan and Samoa. This residence is intended to host great friends, building on the close links that we have already nurtured," he added.

“We can also build new and lasting relationship in culture, education and business, and forge a better understanding about your beautiful Samoa.”

The Prime Minister congratulated Maugaoleatuolo on the opening of his official residence at Taumeasina and thanked him for acknowledging his contribution towards improving ties between Samoa and Japan.

“I also acknowledge also your tribute given to me for the past years of service as the Prime Minister of Samoa. We have contributed in the strengthening and promotion of the strong relations between our two countries since the establishment of diplomatic relations back in 1973,” he said.

“I am honored to wear the order and the relations between our countries continue to grow with the many opportunities to enhancing people to people links, capacity building initiatives.

“I acknowledge also many events to take place in October this year like our Head of State taking part at the enthronement ceremony for the new emperor of Japan. 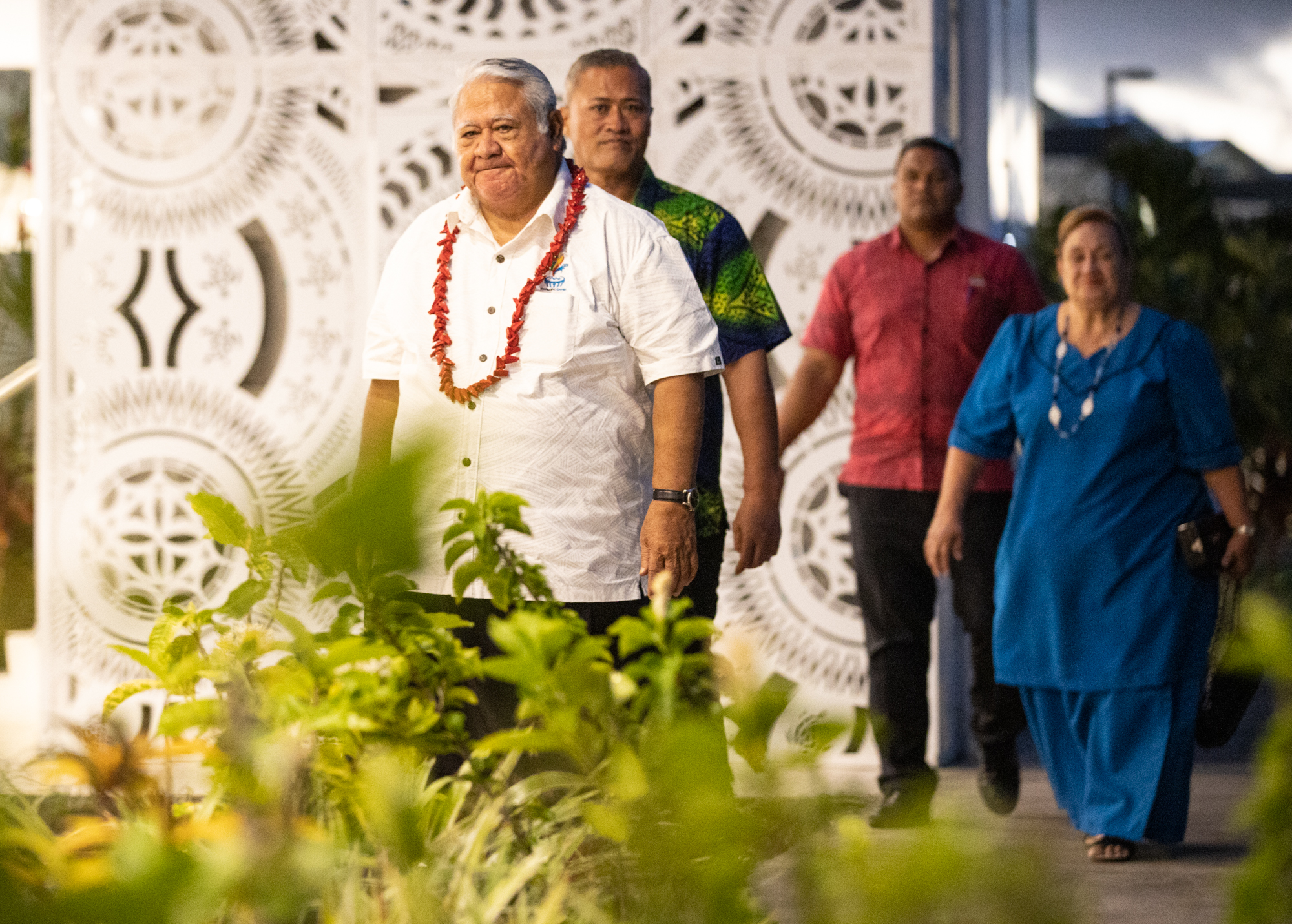 “The Manu Samoa rugby team will at the 2019 World Cup tournament, also we have had student exchange visits between our two countries,  business connection is flourishing as well as close engagement and support for each other on global matters at the United Nations. 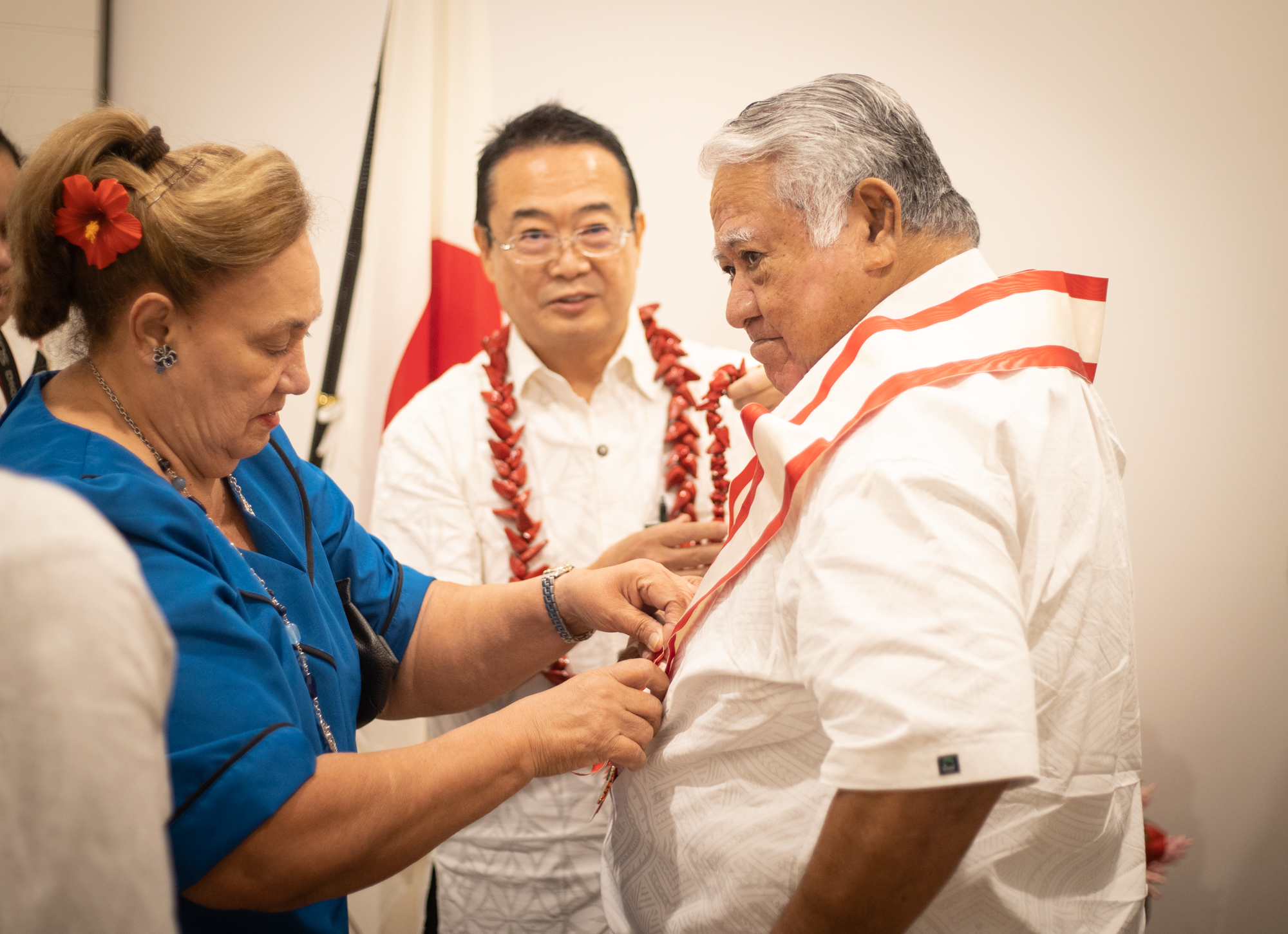 “My attendance at the World Rugby cultural meeting in Japan will be the opportunity to shine the MOU for the replacement of the inter-island ferry and continuing to provide support and assistance for the construction of schools at community level.”

Samoa’s first qualified paramedic Apelu Sauoaiga Kaio has returned and is back with the Fire and Emergency Services Authority to serve the country.