Reverend Leao Lui Seve's life was tearfully remembered by his family, friends and his Falelauniu congregation on Friday.

The father of five and many adopted children was laid to rest in his home village of Faleula.

The Reverend came from a family of ten children. He had seven grandchildren, five girls and two boys, as well as two great-grand children, boy and girl.

"Lui was my sei, Lui was my pride, he was hard working, he was my shelter," said Mrs. Lui. 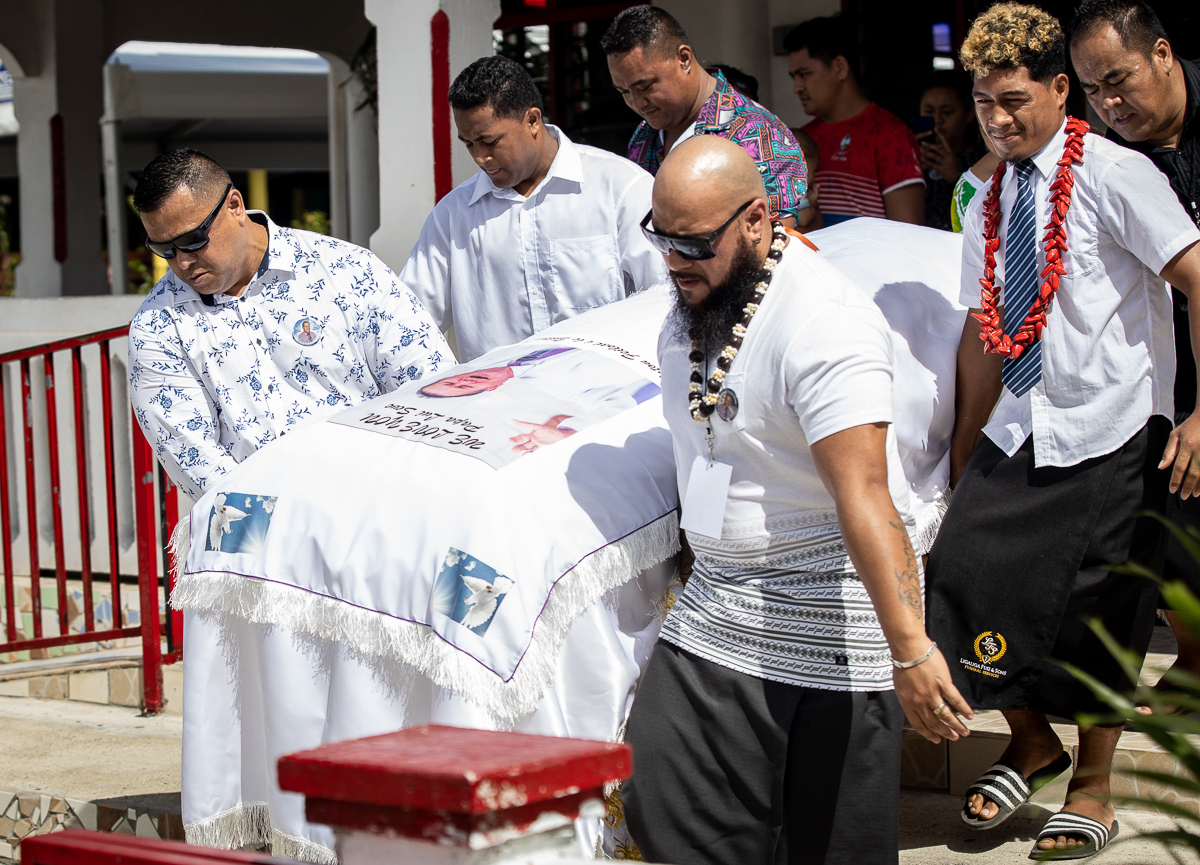 "He loved me and our children. When he passed away, I stood next to him and said: 'Thank you for all the years you cared for me and the children; thank you for your love.'

"Lui has prepared everything for us, as he said the week before he passed: ‘Mum, thank you for trusting me with our money, but when I die, do not worry I have money stored for you. Do not overspend, but budget it well so that it can last you both for a while'."

Mrs. Lui  extolled her husband's kindness as a marital partner and said they haven't had an argument since they were newlyweds.

"Lui, you have gone with my heart so full of happiness, and satisfied with your love, care, protection and our lives given to the Lord for his work," he said. 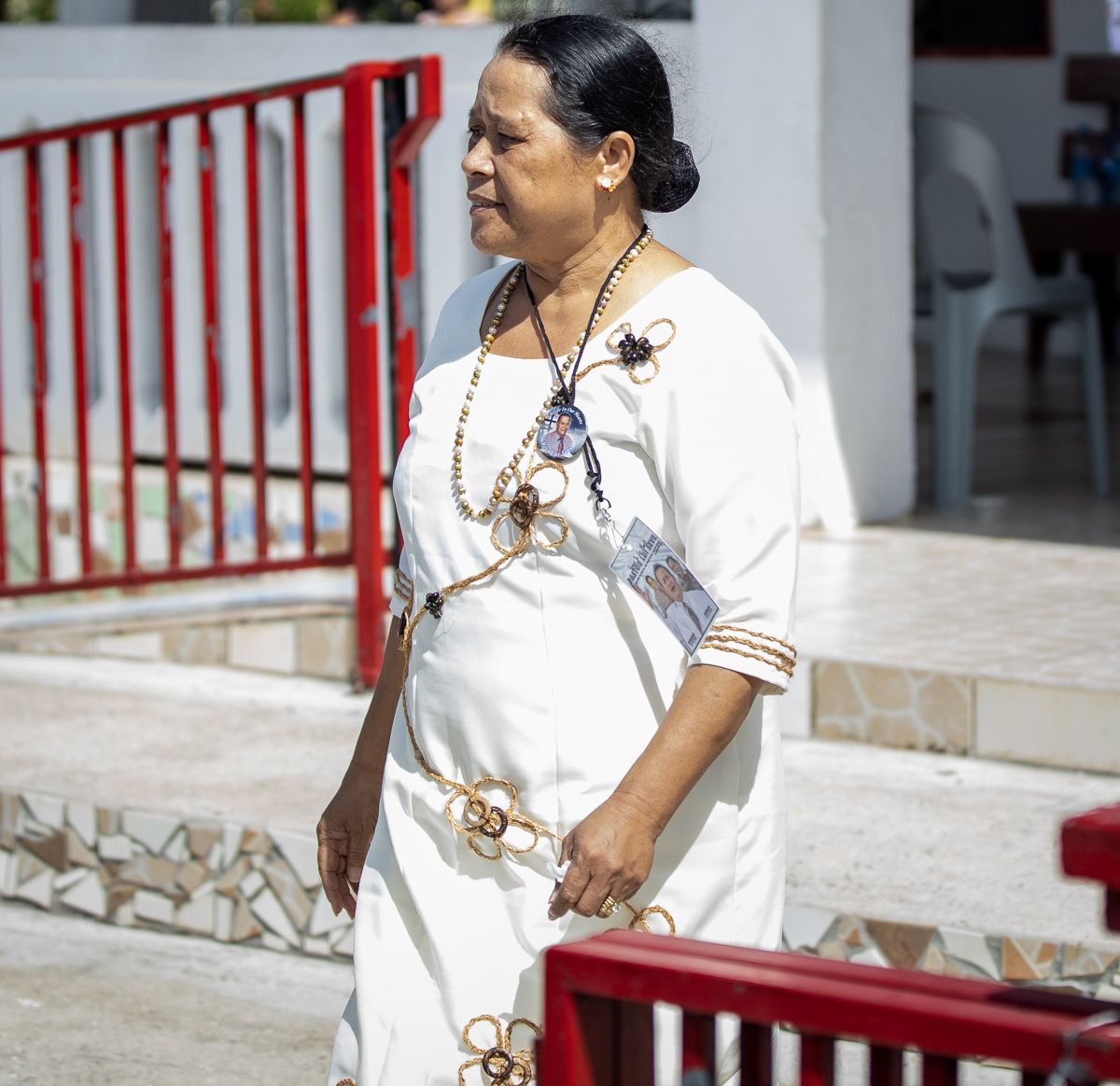 Rev. Seve's sisters were his heart; he cherished his brothers; but he was always so proud of his congregation at Falelauniu, she said.

"He’s someone that is full of love. He was like a father to his sisters and brothers, calling them constantly to check up on them," Mrs. Lui said.

"I thank the congregation in Falelauniu. Thank you for your service and thank you for the many things you have done for Lui, the servant of God.

"My prayer is that God blesses you all, may your families be blessed, may your children be blessed and everything else, especially the continuation of God’s work here in Falelauniu."

The Reverend's death in late July came just a few months after the 20th anniversary of his service in Falelauniu Assembly of God Church.

Nanai Sovala Agaiava, who delivered the eulogy on behalf of the Falelauniu A.O.G. Congregation, said before Rev. Seve came to Falelauniu, there were only four families in the church.

At one point, under Rev. Seve's guidance, the church had 31 families serving the church.

There are currently 26 families actively serving at A.O.G. Falelauniu. 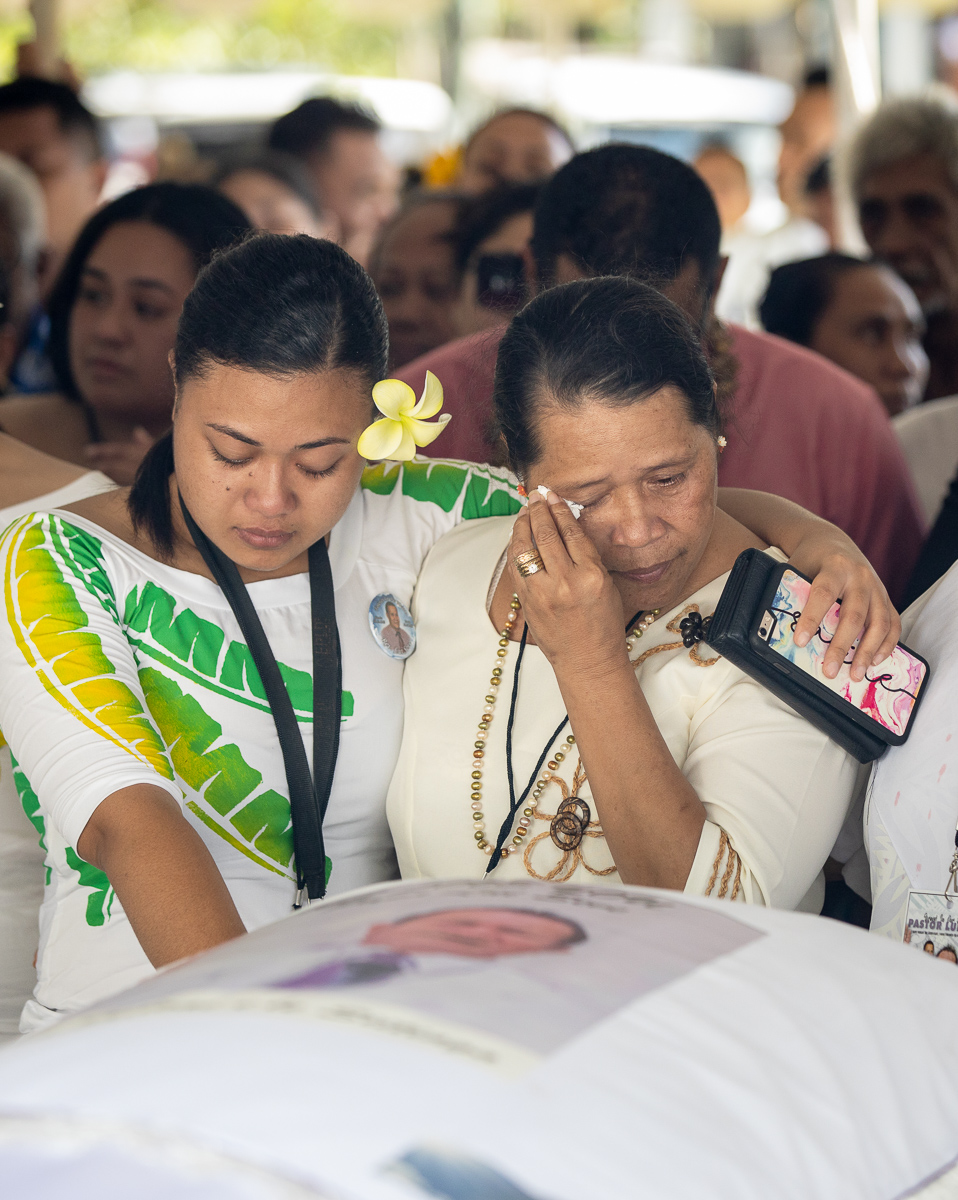 Nanai said Rev. Seve was dearly loved by his congregation, which he had so many plans for.

"We all know, the Government has scholarship schemes, not only Samoa, but also donors from New Zealand and Australia, and also China, but in this congregation, we only had one donor: Reverend Lui Seve," said Nanai.

"This was a unique scheme; one time it would be just your fare for the week, or the year, sometimes it would be your fee for the whole year.

"But the eagerness of the Reverend was that every child from this congregation is well educated. By the time he passed away, this church have had Masters, Post Graduates, Diplomas and so many Bachelor Degrees."

Nanai added that the most important achievement were the many lives the Reverend saved and the many who came back to Christ because of his work.

"This also might be the only A.O.G. Church that has had sermons delivered by Reverends from other denominations," Nanai said.

"He knew that no matter what church, the person that came to our church to deliver was also a servant of God, and that it is a message worth listening to." 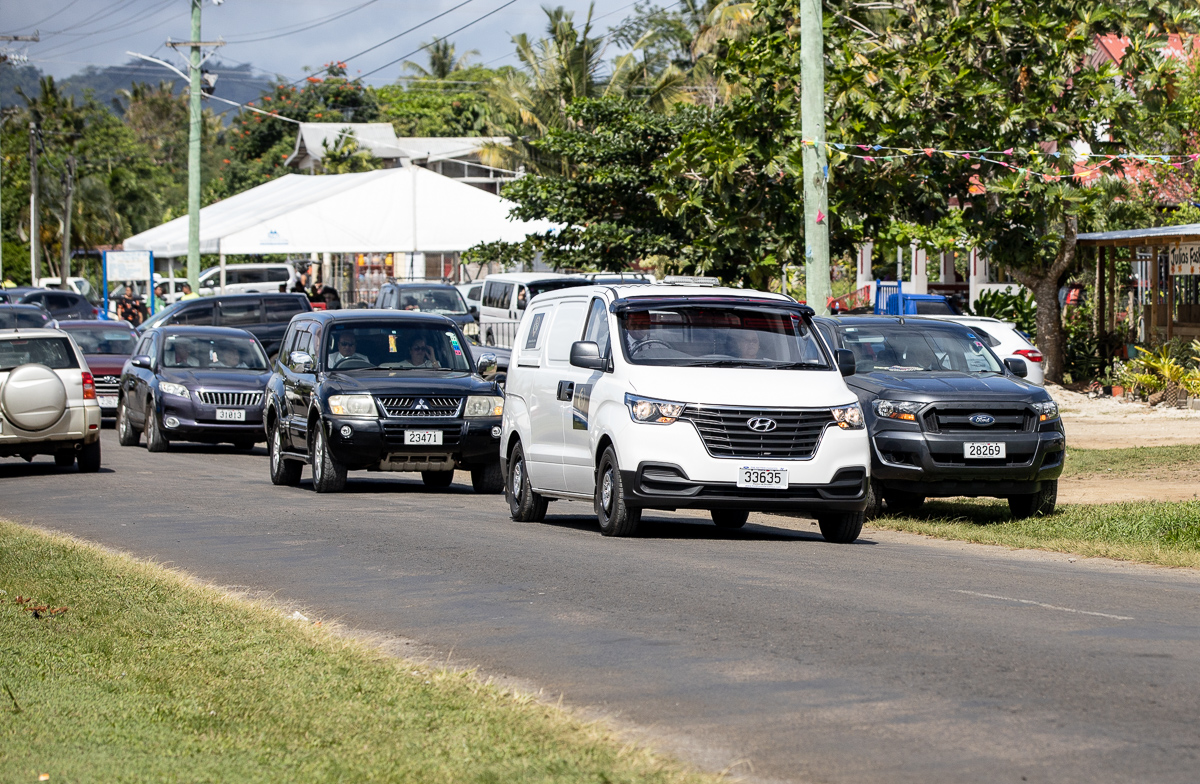 Reverend Seve attended Malie Primary School before heading to Sagaga College, later making it to Avele College. He then made his way to the University of the University in Alafua.

Reverend Seve's eldest daughter, Alofa Lui, said her father was a generous man who always displayed devotion toward his grandchildren.

"We were all the same in his eyes. But he adored the children the most. He abides one of our adopted sister’s children to which we said ‘Dad you’re too old to be looking after kids’ but his heart was for the children.

"Whenever he would come overseas to visit us, everyone else that comes from Samoa usually doesn’t come with any money but my dad always came with money.

"And with that money he would take our children out, you come home to grocery shopping he went out to do and even home ware that he saw was missing in the house." 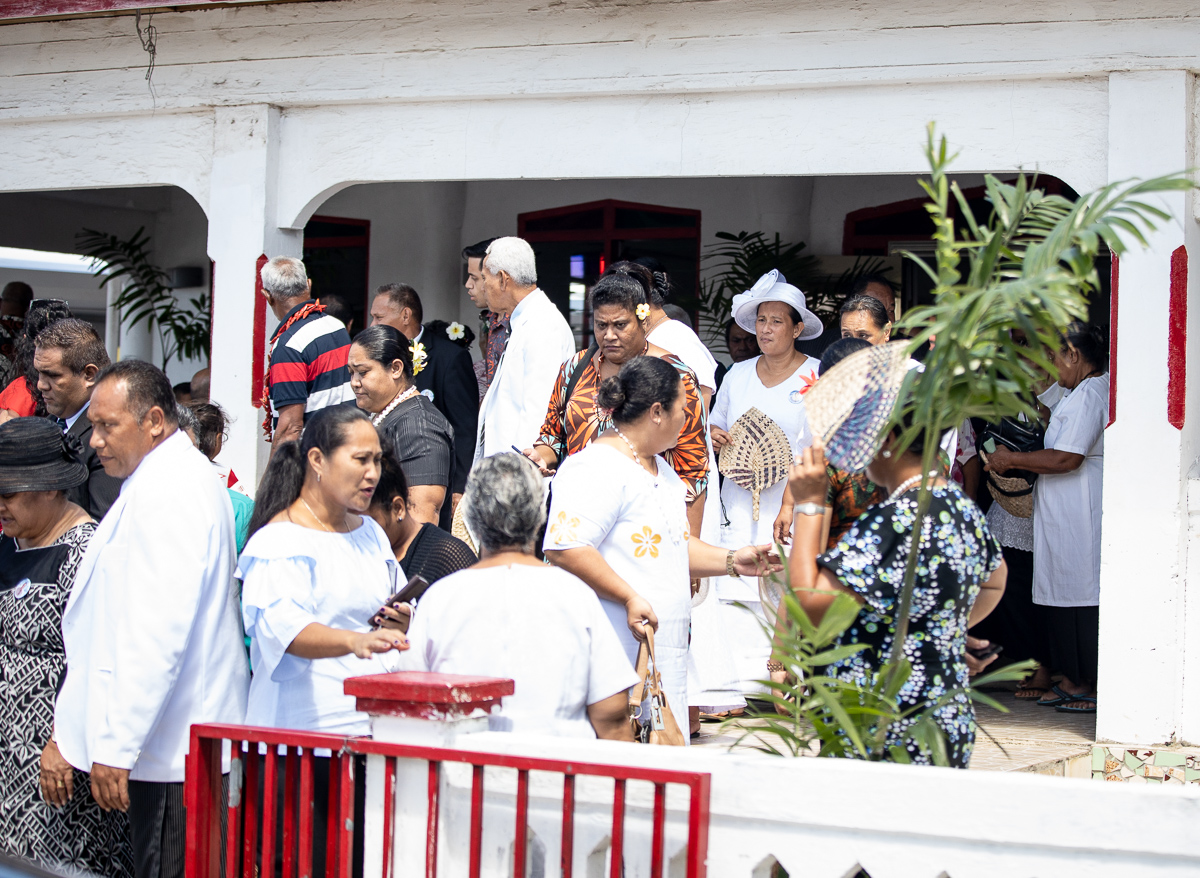 His generosity had no limit, said Alofa, tearily.

Two weeks before his passing, Rev. Seve was in New Zealand for three weeks spending time with her family in their new home, she sad.

"He would always encourage me in everything. Telling me he's so proud of me and saying my house was the best out of everyone else's," Alofa said, with laughter briefly punctuating her tears.

"He was the type of father that would cry and apologise after he raises his voice at you, would always compliment his children. And he would always make me feel better with what he says whenever I'm feeling down.

"Little did I know it was going to be the last time I get to spend with my father."

Minister of Education, Loau Keneti Sio also delivered a eulogy on behalf of the extended family of Reverend Seve from Faleula.