A new one-stop online shop giving Samoan shoppers access to food, handicrafts and services, the Maua app, is now available for download after its official launch on Friday.

Sky Eye’s new e-commerce application promises to be the first of its kind in Samoa and comes with an in-built payment gateway.

By connecting with Digicel and Bluesky’s mobile money systems, vendors can get paid before their product has even been made or delivered, saving thousands where fickle customers may previously have changed their minds.

Maua uses GPS, customer verification and Samoan ingenuity to connect people with the food or items they want, and quickly.

It should benefit women and people with disabilities, people who typically struggle to access the regular marketplace because of transport, cost or family barriers, its creators say. 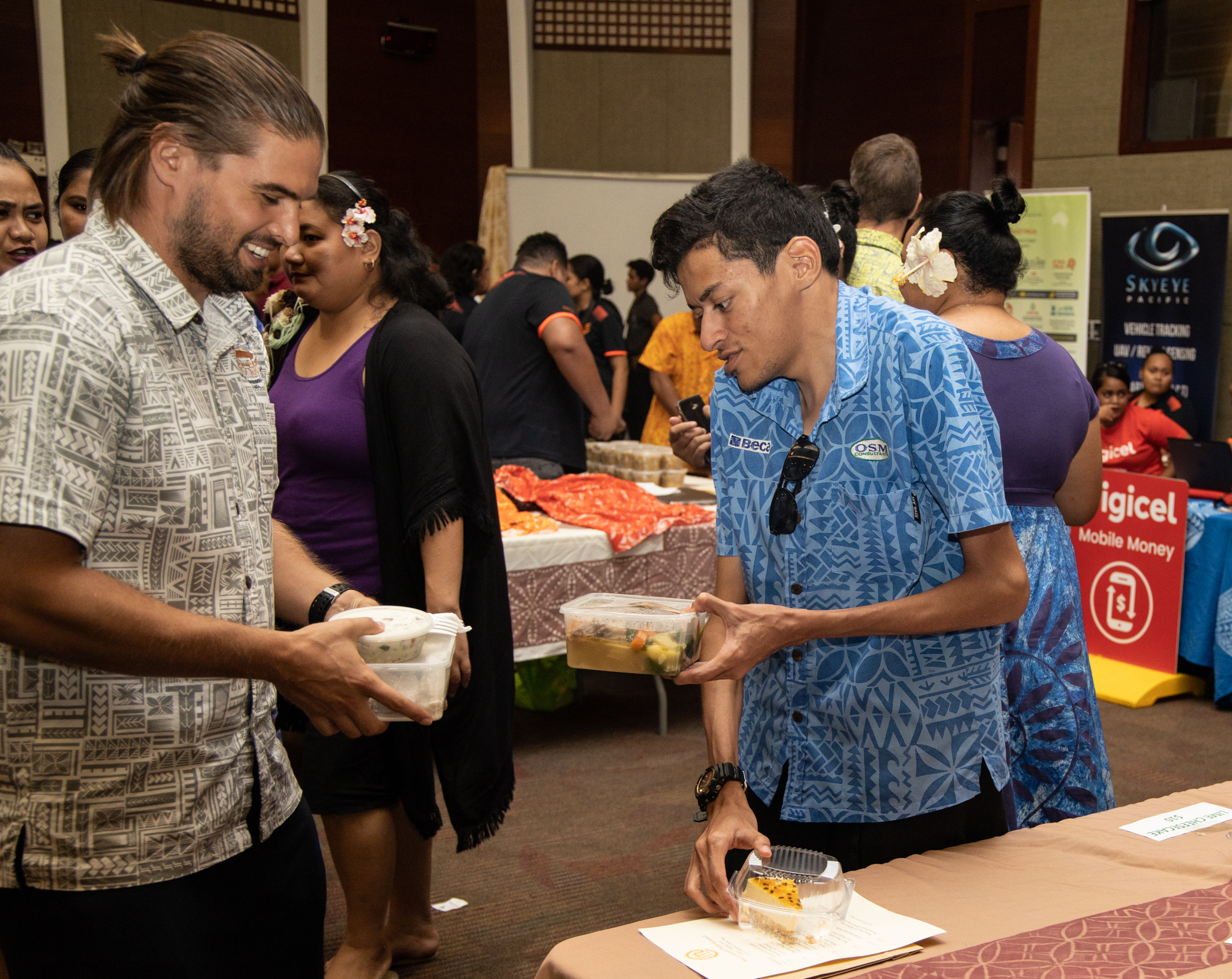 Sky Eye Chief Executive Officer, Fa'aso'otauloa Sam Saili, said Friday was a celebration not just of the app but the partnerships behind it.

“Technology can only go so far, and it will always change,” he said.

"Maua was developed with months of consultations with food growers, craft makers and other vendors around Samoa, from urban to rural, young and old."

Fa’aso’otauloa said he is excited now that the app is here, and the company can show those collaborators tangible benefits.

“I’m excited for our stakeholders to realise the benefit of all the work we have put in together,” he said.

“We will be going out to rural communities together with the Ministry of Women, Community and Social Development, and this time we have a product to show them – that they told us they wanted."

The launch featured a ‘pop-up market’ which filled the T.A.T.TE. conference centre with vendors eager to learn more and see how Maua can benefit them.

Prime Minister Tuilaepa Dr. Sa'ilele Malielegaoi helped launch the app, and said he was excited by its possibilities.

“This was built from the ground up in Samoa with the Pacific in mind, and programmed for our countries and addressing our people’s needs,” he said.

According to Fa’aso’otauloa, this was an issue many grocers and crafts people faced. People would change their minds about a purchase, hours after it was made, when the seller’s money was spent and the work already done.

But the buyers won’t be able to do that without making a transaction first, using their mobile wallet.

Fa’aso’otauloa made a demonstration purchase at the launch. He scrolled through the registered vendors until he found Theresa’s Sewing Shop, from which he bought a blue tote bag 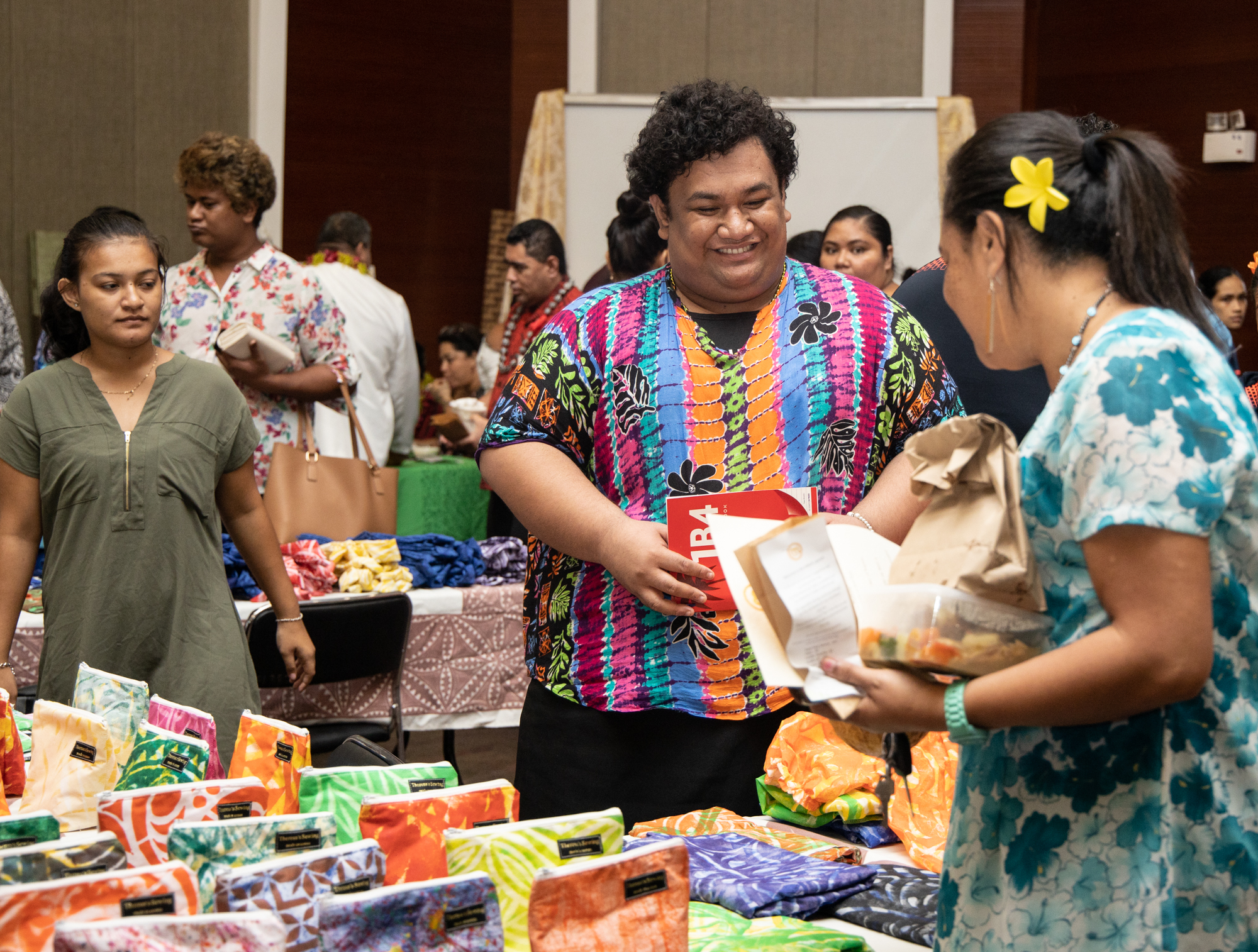 Tuilaepa said Maua is an example of the private sector taking advantage of government tech infrastructure.

“Fast, affordable internet is the key ingredient," he said.

And the app has been designed with inclusivity at irs centre. Skyeye talked to Nuanua o le Alofa (N.O.L.A) about how to ensure people with disabilities would benefit from the app.

“Because we already know what it feels like when huge companies develop platforms overseas and ignore the Pacific – and there is no comparison, but we wanted to make sure it is inclusive of everyone in Samoa,” Fa’aso’otauloa said.

“It’s very easy. People who are deaf, I think they will use the app, especially if they don’t want to go around the markets.”

Ms. Faaiuaso-Brown said there are at least 100 deaf people in Samoa, who have registered with the Hearing Services who would benefit from an app like Maua.

She said she may try and gather the community to learn more about the app and understand better how it works. 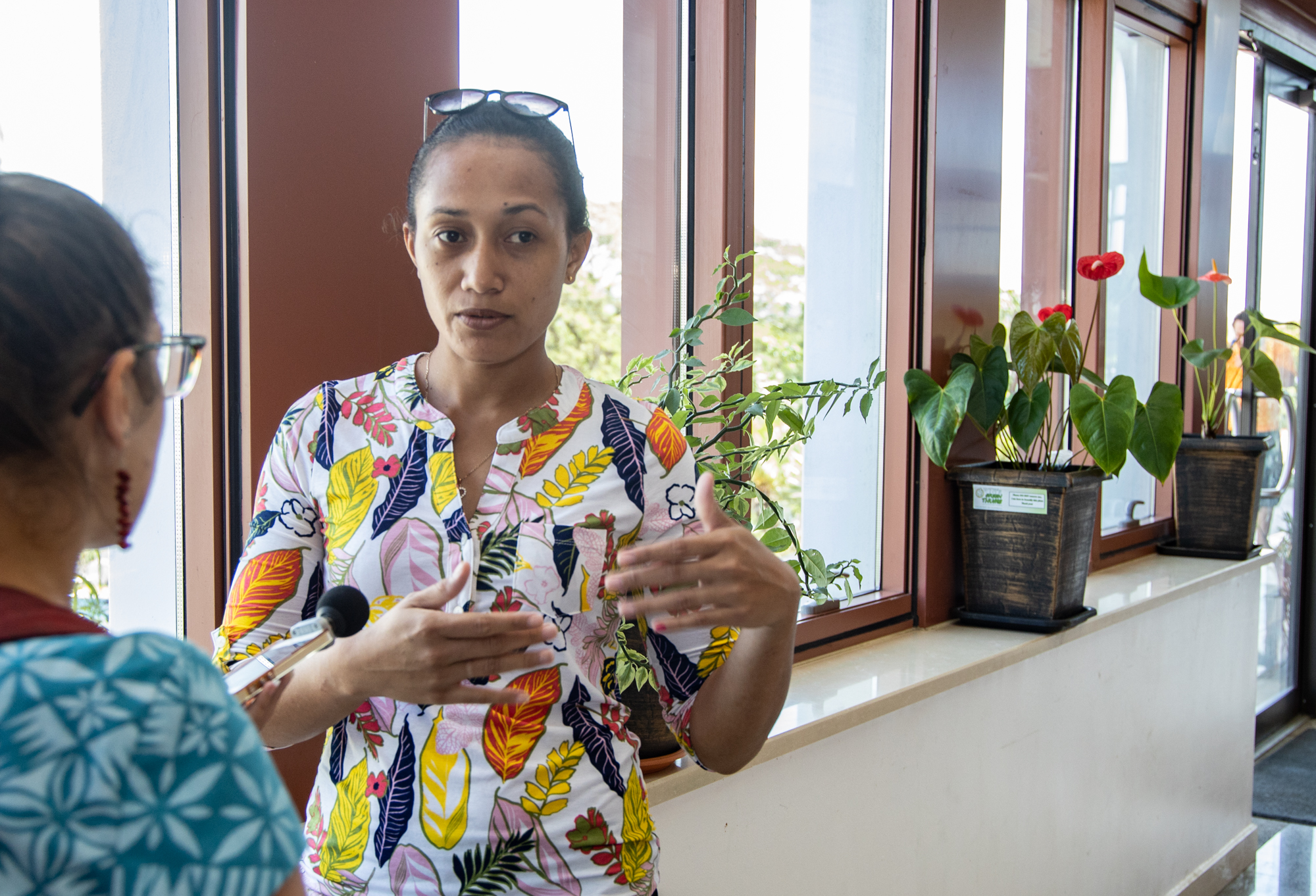 The app was built with $320,000 in funding from the Global System for Mobile communications Association (G.S.M.A.) Ecosystem Accelerator Fund in 2018.

Skyeye was the first Pacific business to win the award, meant for start-up companies who need money, technical assistance and partnerships with mobile operators.

In 2017, the Samoan owned-and-operated company also won a place on the Asia Pacific Frontier Innovators programme, and this year they won US$50,000 (T$ 132,251) fund for medium enterprises working to lift women’s economic participation, from the United Nations Capital Development Fund (U.N.C.D.F) and U.N Economic and Social Commission for Asia and the Pacific (U.N.E.S.C.A.P).

The funding allowed them to build the platform including a unique mapping system to overcome Samoa’s lack of addresses, and eventually build an independent mobile payment gateway as well. 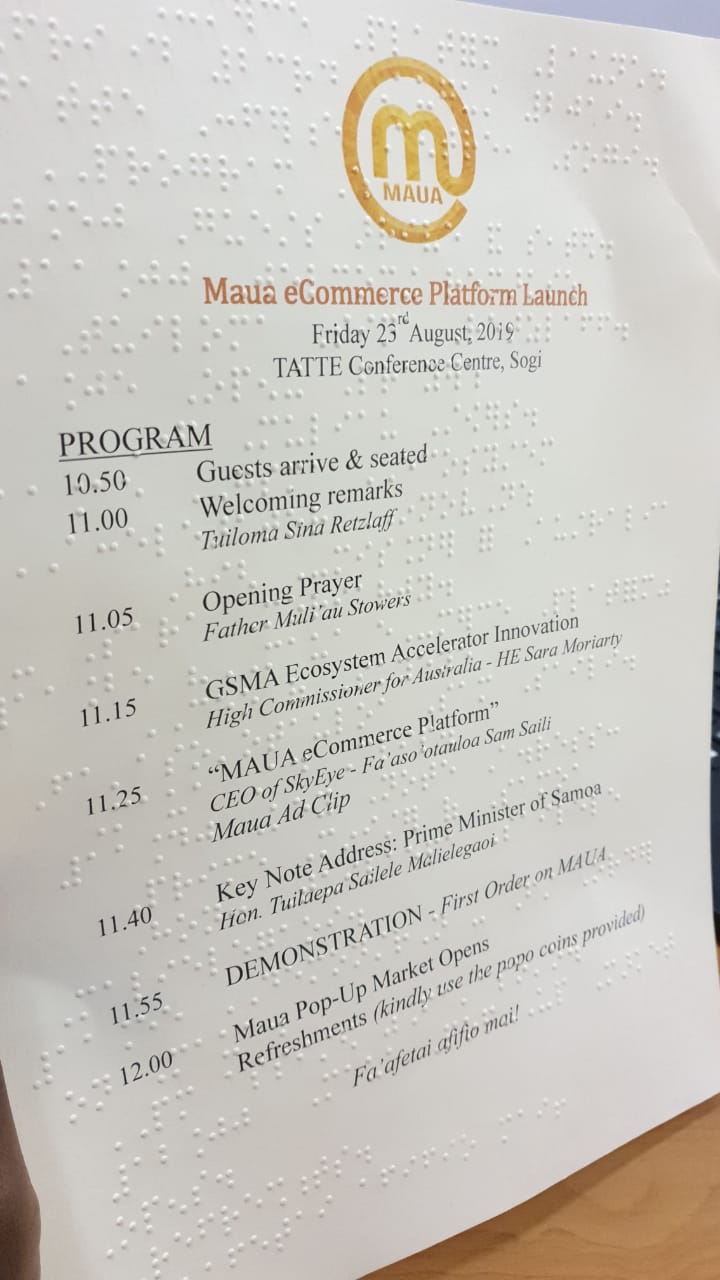 The Samoa Women’s Association of Growers attended the pop-up market, with a variety of the member’s wares like potted plants, homemade jams, koko products, vanilla and even bread made from ta’amu.

S.W.A.G member Pearl Blakelock makes the ta’amu bread and chutneys from a variety of local fruit, and said her biggest challenge is getting her produce to customers when it is fresh.

Maua could change that, she said.

“My products have to be fresh so I can only bake bread and sell the next day – you can freeze them but I like to sell them fresher.

“But this way people can just jump on, find what is there, they are happy with their product and you have your money!”

The S.W.A.G members hold a Sunday morning market next to the Fish Market in Savalalo, but once a week isn’t enough to meet demand for her produce, she said.

“For our little products I have to wait till Sunday but people want them during the week,” she said.

“But if I make orders then I have to come to town. But this will get to people easier and quicker.”

Ms. Blakelock and her daughters also farm taro, nonu and banana at their farm Purpose Plantations.

She said her grandchildren will probably help her with the mobile money side which is still too new for her, but likes that she is fostering entrepreneurial spirit in them when they help at the market. 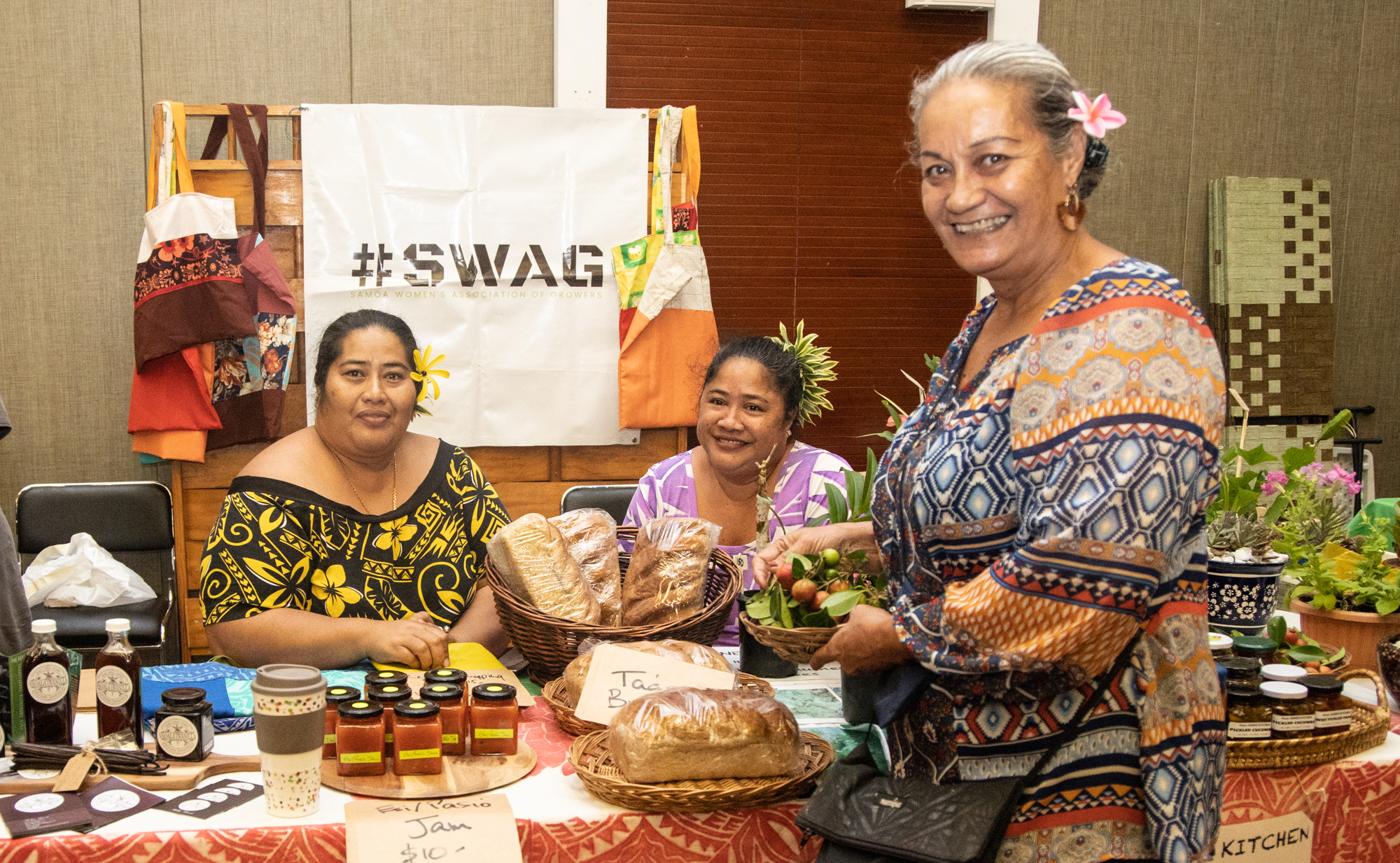 David Vito and his family travelled from Lanu in Savaii for the app launch, with a selection of hand crafted handbags from laufala and lined with tapa cloth. They can take up to two days to make, and the whole family works on them, led by his mother.

“Maua will help me make marketing easy, that is the best thing for me,” he said.

“I have come a long way so Maua will help me transport everything and bring me my money, that’s what we want.”

So far, Mr. Vito sells through word of mouth to people in the village, especially when they are going overseas – about 25 bags a month, he estimates. But Maua could open up his market dramatically.

“Before, I wait at my home for my friends before they go overseas; they come to my home and buy whatever they want. 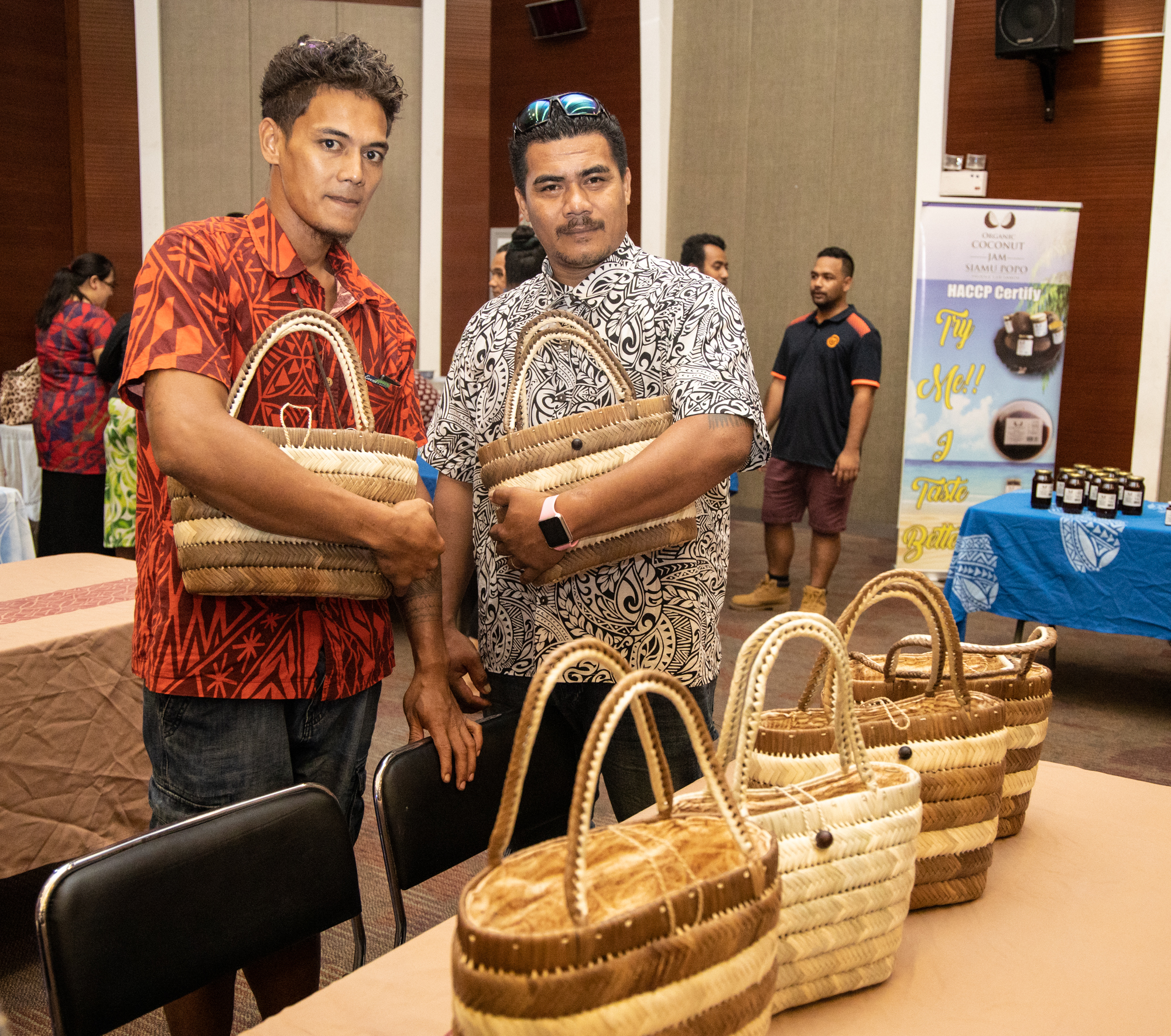 A craft collective under the Poutasi Development Trust hopes to benefit greatly from the app. Tammy Mauala said without a website or dedicated marketing, the P.D.T struggles to move its beautiful merchandise.

“We are so busy doing so many other things we don’t have time to focus on that, so for Maua to come along and want to work with us is amazing, it’s what we needed.

“My girls will make all this stuff and it just sits there because no one knows about it, but now we have a platform.”

The work will be lifted too, with ratings on the platform and more products for customers to compare too, Ms. Mauala said. 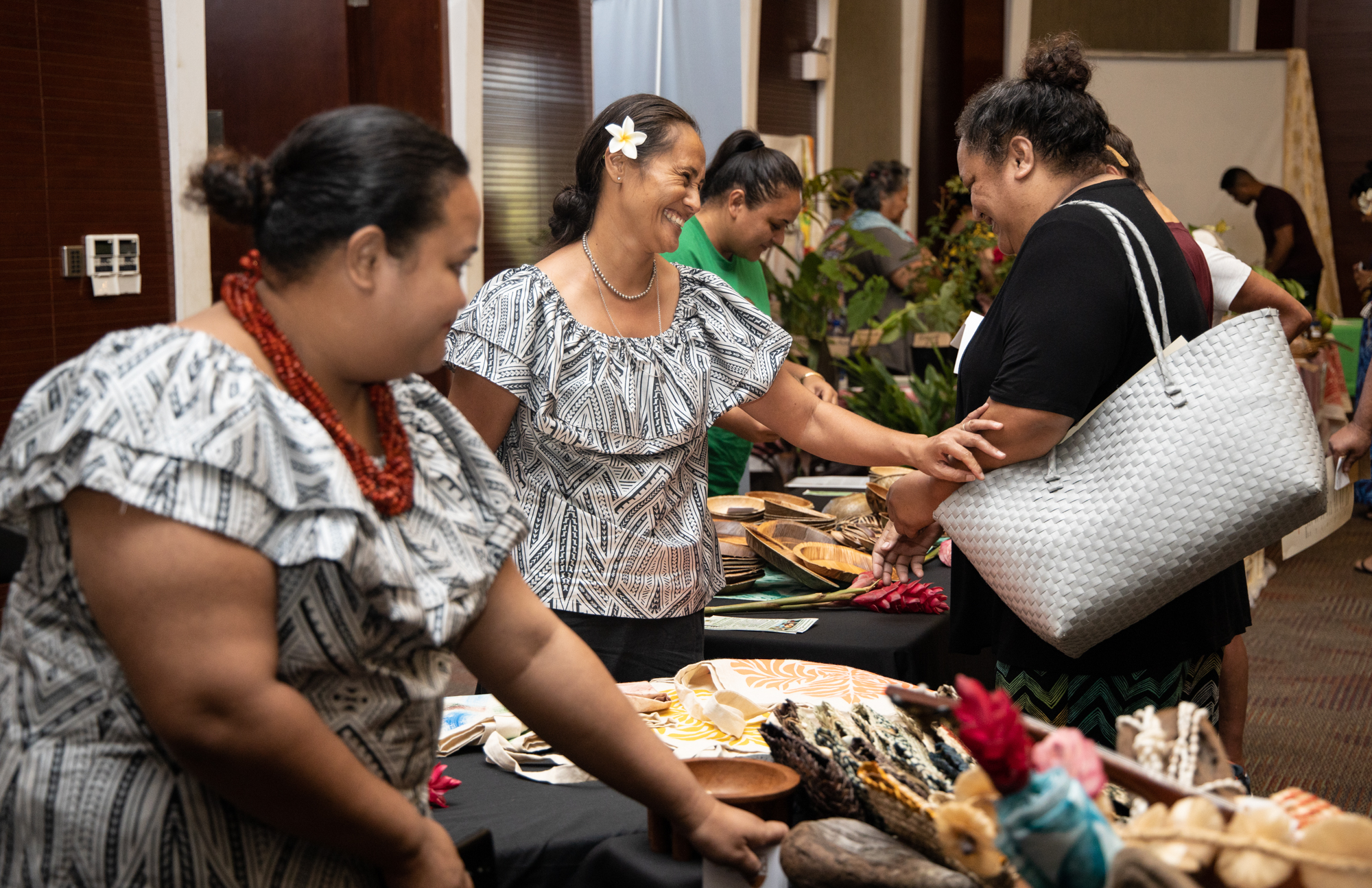 Another rural business woman, Eseta Papu weaves fine mats in her village of Aufaga. She sells up to ten mats a year, which take a half a year each to make and can cost $5000.

Her family has been making fine mats for over ten years, and has become much faster at weaving over the years.

Today, her orders come through the Ministry of Women, Community and Social Development, who direct customers to her when they call. Ms. Papu said if she could get orders directly, she may sell more.

Her fine mats pay for her two children to go to university.

“It’s hard work, it damages the eyes, and the body but we are trying hard to make it because it’s a good business,” Ms. Papu said.

“I stay home, look after the kids, look after all the families… and, this is from our own land.

“We plant, we make it from the Samoan laufala. I plant it, and I get it and weave to get the money.” 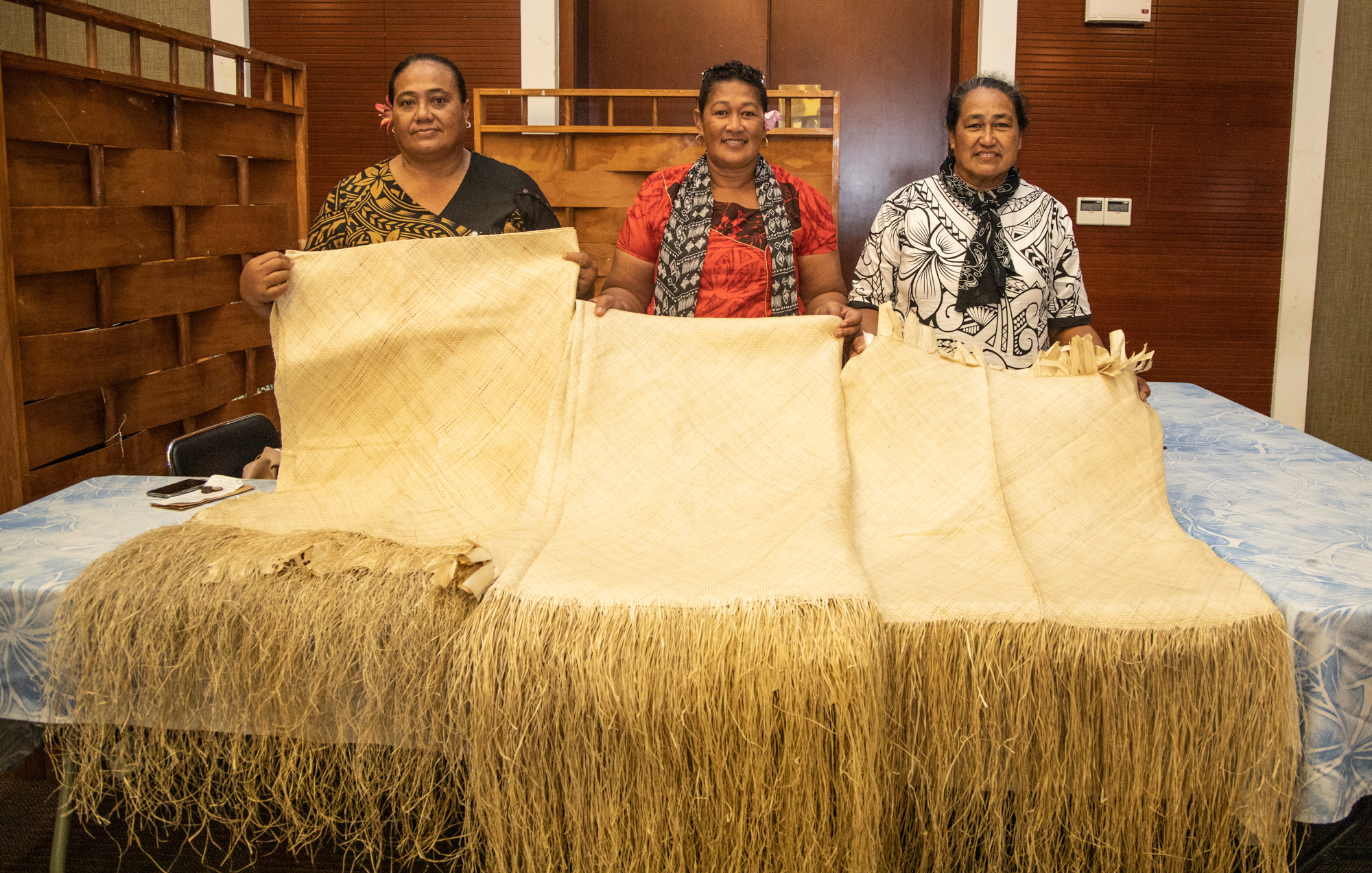