Mother beaten outside school fears for her children

A mother of six who was dragged from her car, stripped and beaten by four women in front of her children outside their Primary School says she has ongoing concerns for the safety of her children.

Forty-one-year-old Lesina Fidow was attacked outside Vaivase Primary School last Thursday while she waited to pick up four of her children. The beating left her in hospital and fellow parents stunned .

She has told the Samoa Observer that she has checked herself out of hospital after four days' treatment because of fears for her children's safety.

Mrs. Fidow said the four women pulled her out of her vehicle, tore off all her clothes and attacked her in front of her children who were looking from inside her vehicle.

Two of those who attacked her were friends; the other two were street vendors, Mrs. Fidow believes.

But she says the dispute that led to the incident remains unresolved and she now has concerns for her children's safety after they were threatened and bullied at school in the aftermath of her assault.

"Our own personal motherly and friendly dramas [are] causing my son to stay home because he’s scared to go to school now," she said.

She says the attack ended shortly after a knife pierced the right side of her head.

“I [had] nothing else on my mind but my children and I got to admit I was scared that something worse might happen to me in front of my children and worse, I was naked all over,” she said.

Mrs. Fidow said she was surprised to recognise some of her attackers at friends and suspects the attack was motivated by a dispute over property or rumours.

"The other woman was blaming me for having an affair with her husband,” she said.

A Vaivase resident, Motiana Aukuso who was at the scene of the attack said the attack on Mrs. Fidow was so terrifying she could not have intervened.

"Whatever reasons those women had, they should’ve done it without her children looking,” she said.

She even saw one of Mrs. Fidows’ sons coming out of the car calling for help:

“We all do not know what the real issue is and who is right or wrong but my point is, we are all Samoans and having children involved in a situation like this is indescribable.”

Because of this, Mrs. Fidows’ four children will not be attending school until concerns for their safety are resolved.

“I can’t drive and barely move so I’m afraid they’re going to stay with me until I get better,” she said.

Mrs. Fidow lives alone with her children while her husband is off island for work.

Police did not return a request for comment by press time. 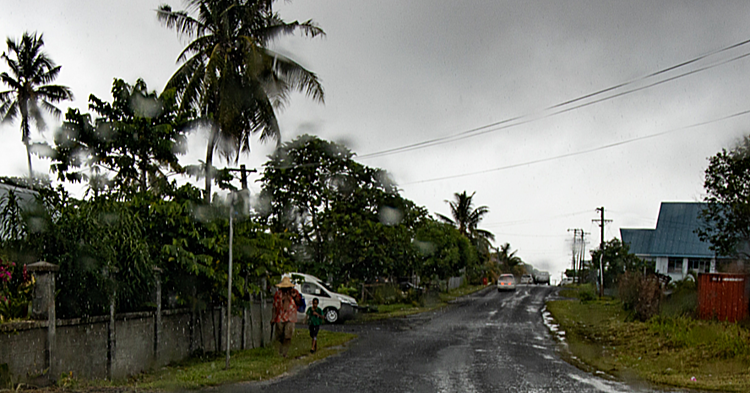 The public has been warned to take precaution as a small craft advisory remains in effect for all coastal to open waters while a wind advisory has been issued for the eastern to southern districts and the highlands.

Last week, Ms. Goebel walked on the Government House stage in a flowery gown representing her Samoan culture to receive recognition for her what she does for – something others can only dream of – her services to dance.