Samoa Gridiron players have secured eight scholarships, three at the College of the Sequoias and five at Contra Costa, all in California. (Photo: Aufa'i Areta Areta)
Gridiron
Education

Eight Samoan gridiron players who toured the United States in June have walked away from the trip with scholarships to American universities and a potential path to starts in college football.

Samoa Gridiron took nine young men to California for training camps and college tours, to foster the pathway into scholarships and greater education opportunities through the sport.

Three players, Wesley Kamu, Qudrat Leota and Carlos Keil were offered places in the College of the Sequoias, a public two-year community college in Visalia, California. They have stayed in America to begin the term.

Five others have accepted places in Contra Costa College in San Pablo, and will return next year once they finish their schooling here.

Just one player, year 12 student at St. Josephs's College in Alafua, BJ George Toleafoa, has not yet lined up any offers because he will complete year 13 first next year. 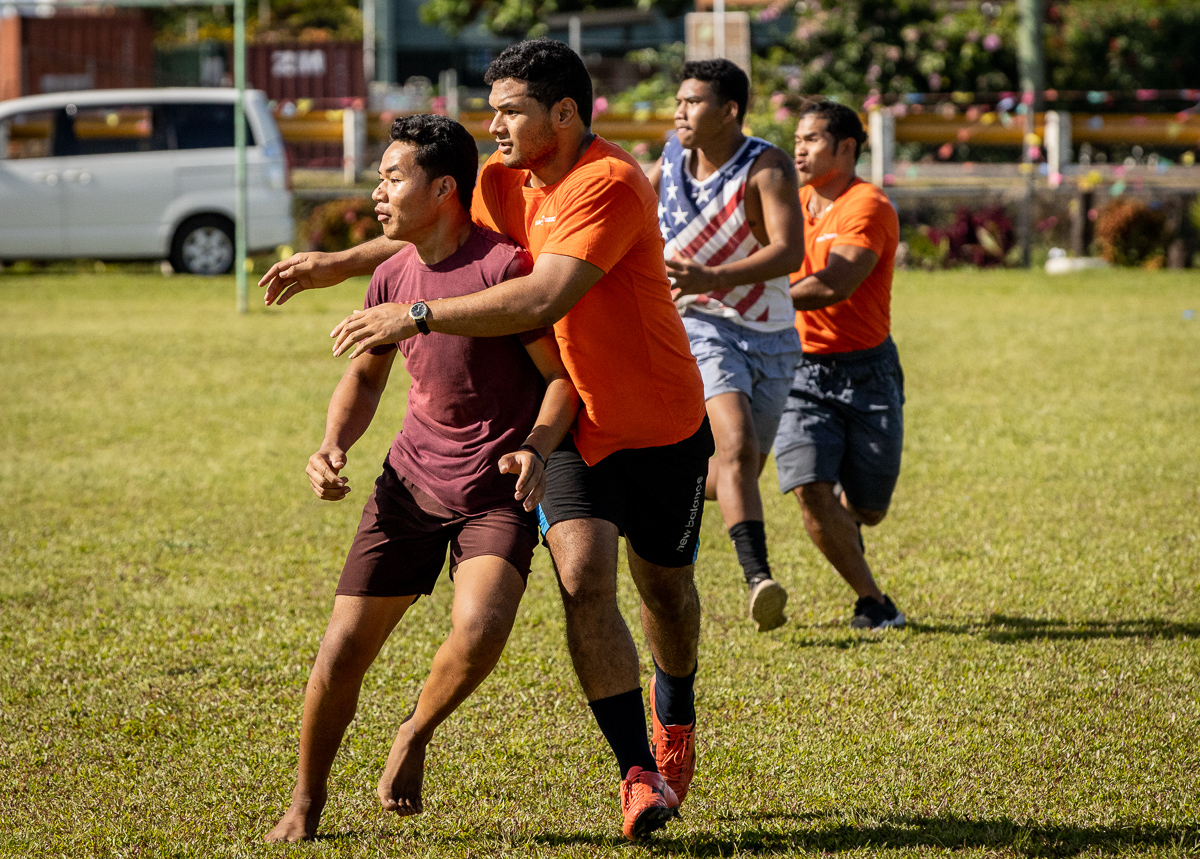 “It was indescribable,” he said of playing in California.

“We’ve been training for three years now but we were not expecting to train alongside those big leagues. We went to the motherland.”

Mr. Toleafoa said playing gridiron has inspired him to pursue his studies, something he was never passionate about before.

“It doesn’t matter how good you are at something, if you are not good with your studies, you are broke your entire life," he said.

“When I first started year nine I wasn’t into studying.

“Ever since I started training for football and studying to get a scholarship, it motivated me to study. It doesn’t matter how good you play, if coaches see your reports from school aren’t good, they’ll drop you, they don’t care how good you are, how big you are.

“That is what pushes me with football now.”

Coach Callum Jones said despite limited training and playing time, coaches at all the colleges they visited were impressed with the talent on show.

“The boys really shone, they were amazing,” he said.

“Everyone knew who we were, we kind of had an eye on us, and all the coaches were excited, coming up to us, excited to see how they can help.” 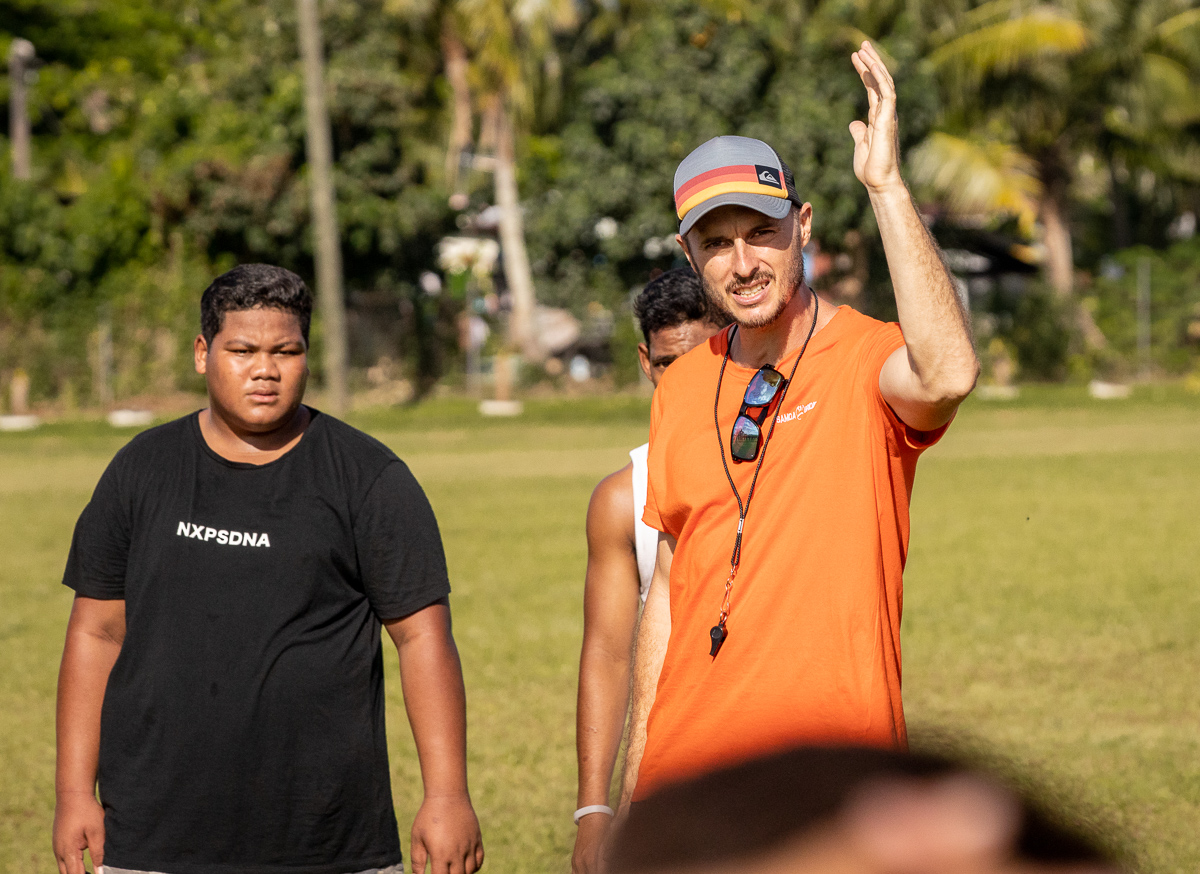 Contra Costa College and the College of the Sequioas are junior colleges and they offer a development route to college gridiron football, of two years of training before putting players up for scholarship opportunities to senior colleges.

Based on the level the Samoan boys are at, Mr. Jones said the development route makes more sense:

“Those first two years are practicing and honing your skills, and then look to get drafted into the university system.”

The gridiron community welcomed them warmly, and the colleges have several Samoan or Tongan coaches and staff who were excited to see a Samoan contingent in California, Mr. Jones said.

It shows there is a viable pathway to the United States, and another option for academic scholarships.

“There is a huge appetite,” he said.

“Right now I have at least five schools that are saying we want to see what else you have got, so next year I could send twice as many.”

And, for Mr. Jones, it’s about more than the scholarship; it’s about an educational institute that will support Samoan students to succeed.

“We have to put them in a place that understands where they are coming from, that English is their second language and that will help provide a support network and connect them with Samoan students who are close by," he said.

We don’t want to set up these kids to fail over there.

“It’s about us having relationships with those colleges, to know they are going to a college who knows where they are coming from and how unique they are.” 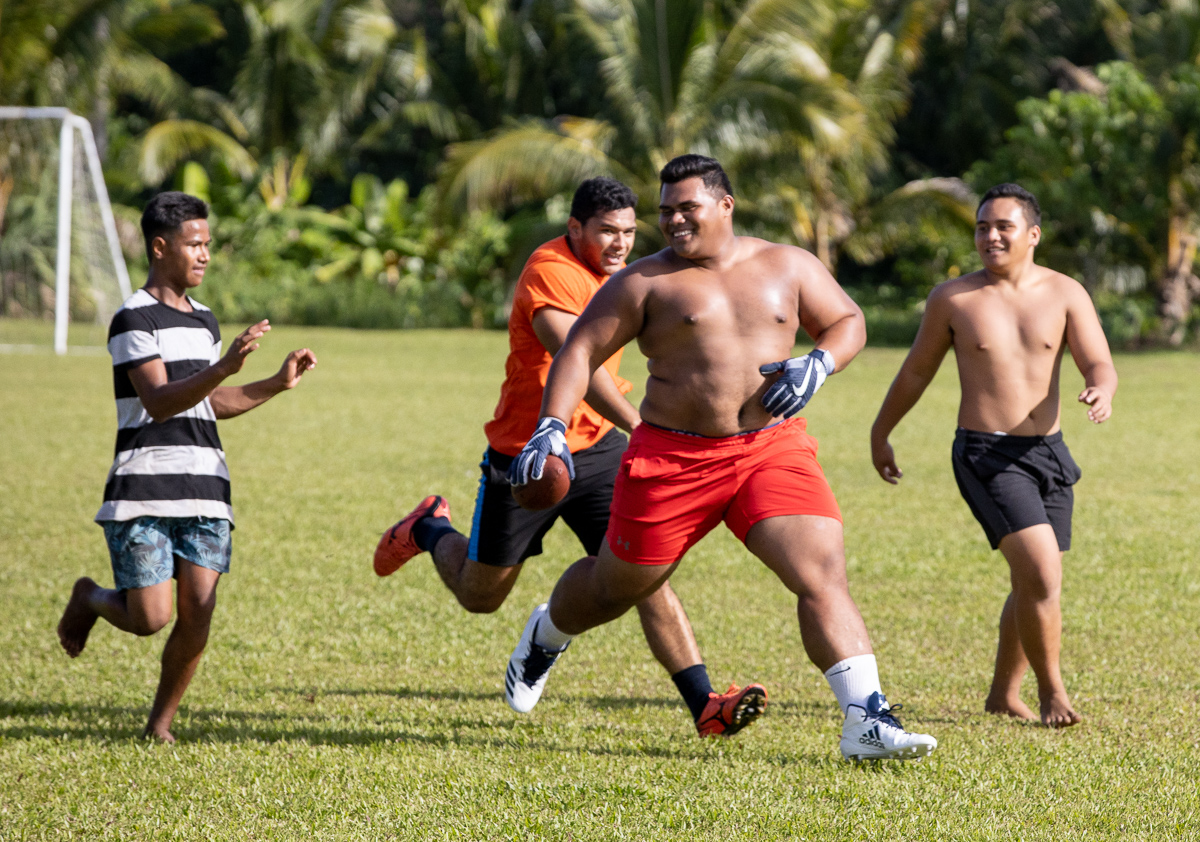 As well as gridiron training, Mr. Jones runs an academic club for the players, helping them with homework and offering a space to learn and prepare school work.

At a local open event for interested high schoolers, the United States Coast Guard dropped in to throw a ball around.

Mr. Jones said having coaching help makes all the difference to getting the boys at a high playing standard, and it’s a game that requires a lot of hands on deck.

He trains with the team after school from 2:30pm till 4pm at St. Joseph’s College in Alafua, and hopes to hold a local tournament eventually, and said anyone who wants to help coach should reach out to Samoa Gridiron on Facebook. 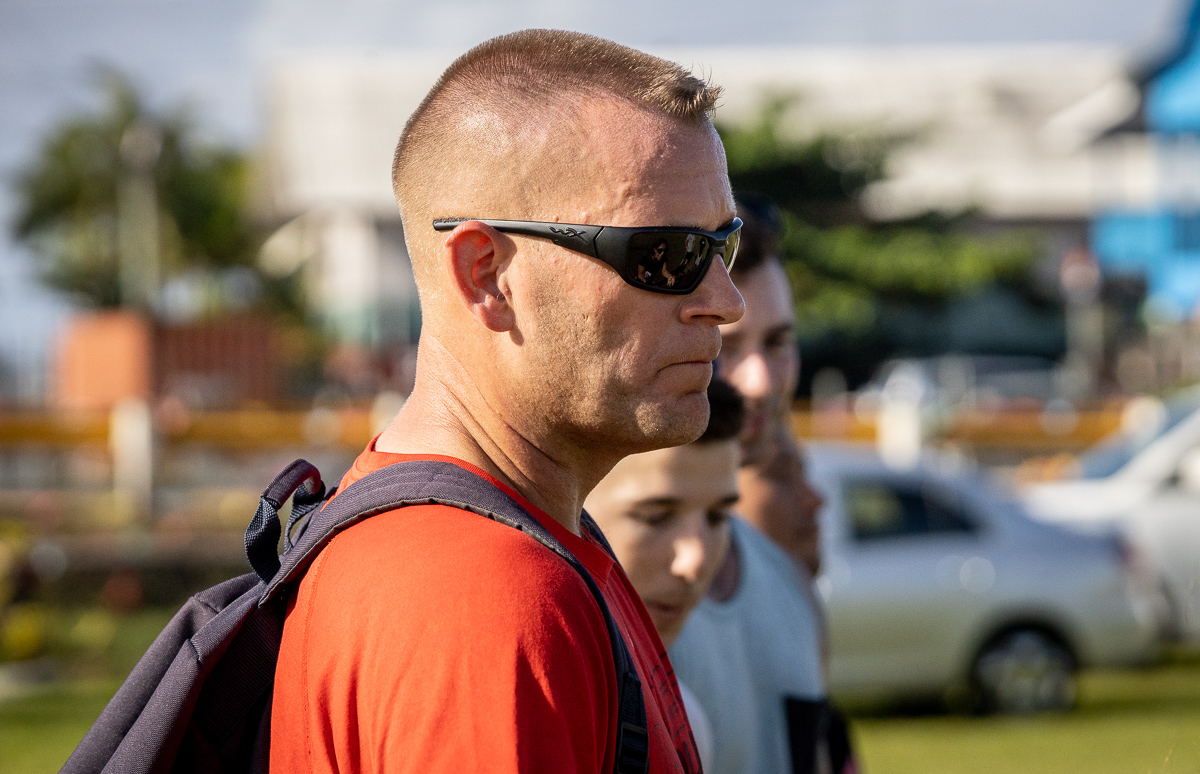 Commander in Chief of the United States Coast Guard Cutter Walnut Bradley Lindsey said playing gridiron for the afternoon was “probably the most rewarding” experience they have had in Samoa.

“We are happy to be here today and give a little bit of what American Football has to offer to these guys who don’t know that much about it,” he said.

He said funding is clearly the biggest barrier between the gridiron players and their career opportunities, especially to fund training equipment and resources.

“There is a lot of potential out here and these guys want to play, they just need the tools in order to be able to do it," he said.

And that is a message he will be taking back to the United States, with a view to raising funds for the Samoan gridiron players.

“For our future patrols down in this area we can come better prepared to set something up like that,” he said. 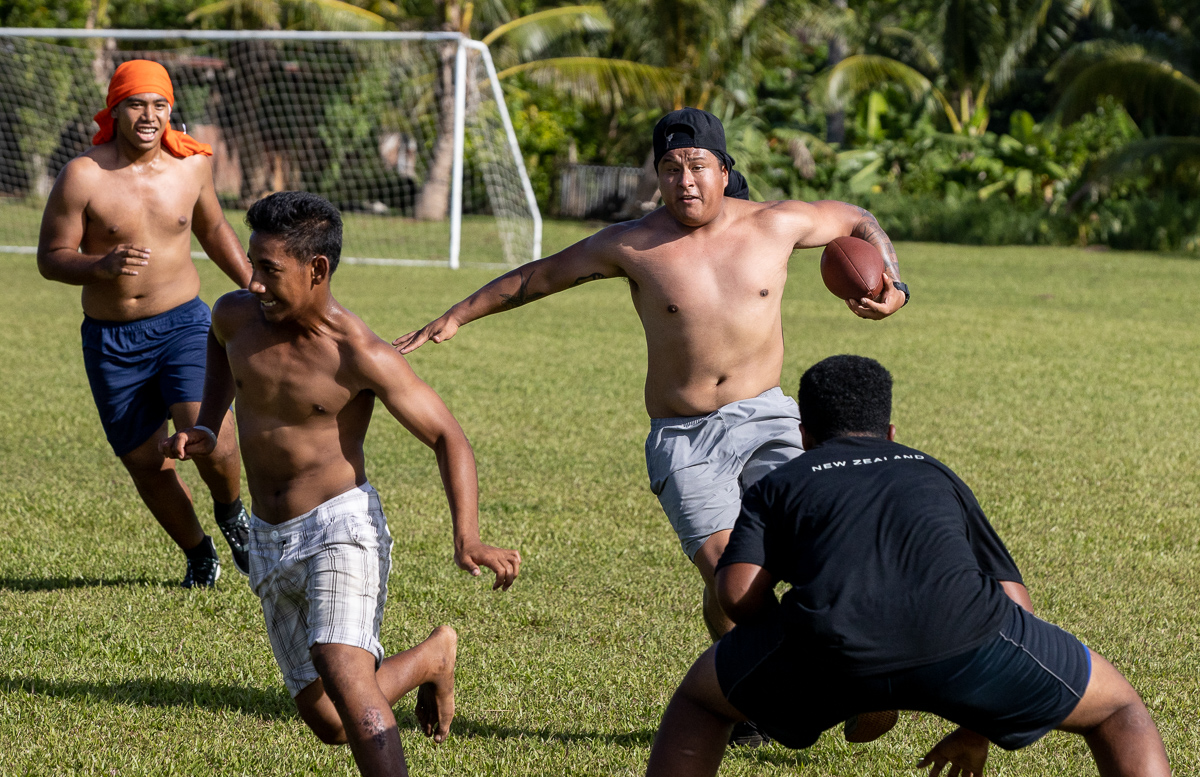 Coast Guard sailors Julio Swindle and Eli Teagle both played gridiron in high school, and said they enjoyed running around with the local team.

“It was an honour to come and play with these kids, who have so much potential and I hope to do this again,” Mr. Swindle said.

“There are a lot of strong runners, I can definitely see a lot of them being big line-backers and I feel like if they had the tools here, they could become something more than they are right now.” 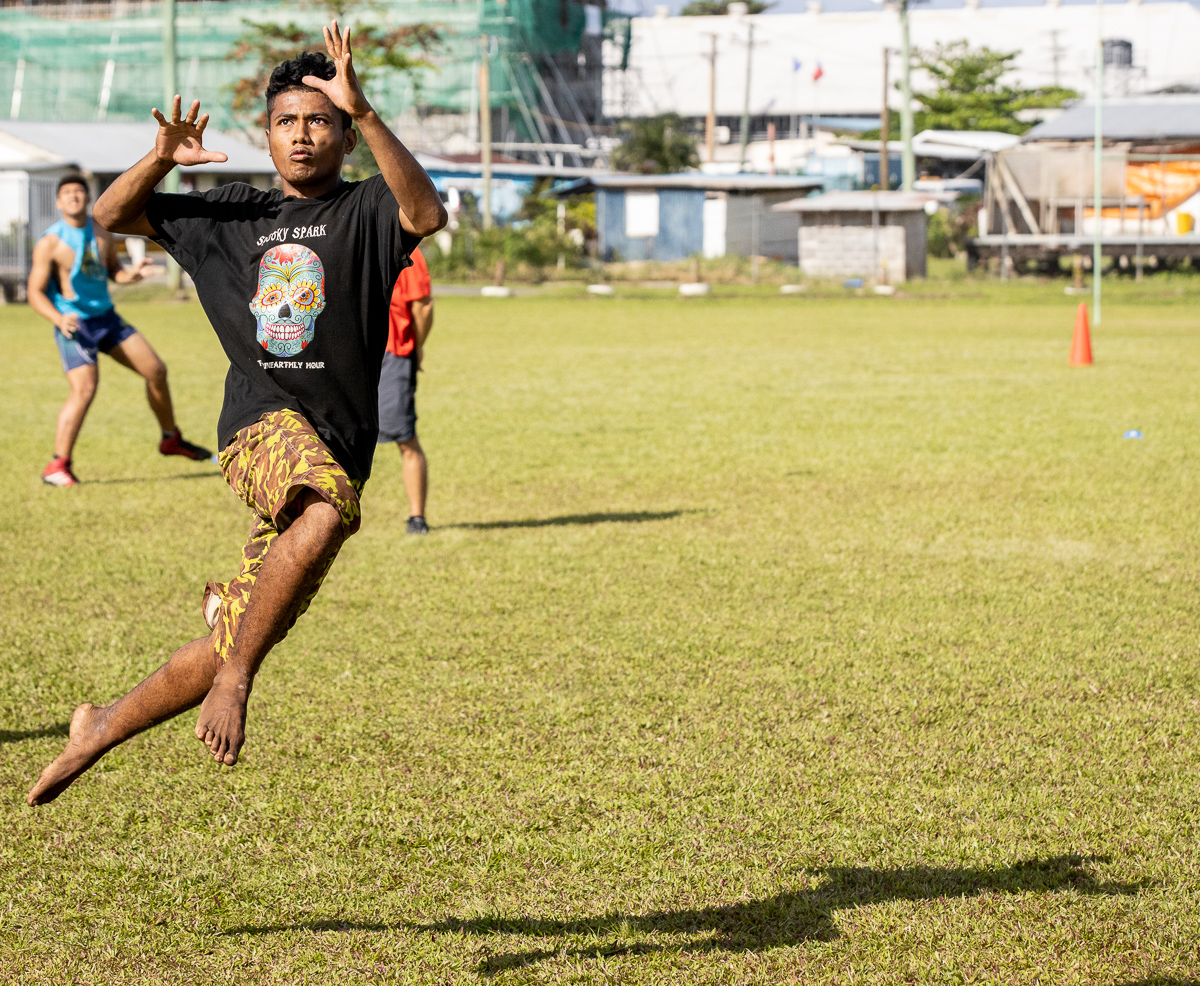 “They are just so happy to be here, it makes it an amazing experience.”