New Zealand Prime Minister Jacinda Ardern's state visit to Tokelau has taken her to two of the territory's three atolls, where she has focused on health and education, but the trip has again been marred by controversy over media censorship claims.

Ms. Ardern spent Monday on Atafu, where she was greeted by the Ulu o Tokelau Kelihiano Kalolo and a large welcoming party before meeting men’s and women’s groups to learn about their issues.

But it was not an entirely smooth visit for the Prime Minister's visit to New Zealand's non-self-governing territory and the first in 15 years.

Newshub, a New Zealand news service travelling to Tokelau with Ms. Ardern, reported that an unnamed member of Ms. Ardern's staff "threatened local journalists with restricted access", if they asked questions about a burgeoning domestic dispute over the use of land.

Only after a "crisis" call was placed from the New Zealand capital, Wellington, were journalists allowed to ask questions, according to the Newshub report.

The Prime Minister's meeting with women’s committee members, who recently had a Women’s Summit, spoke with Ms. Ardern on female empowerment; the Aumuga, or male labouring workforce met her too.

The delegation visited Matauala School, the only school on Atafu which teaches until Year 11.

The New Zealand Ministry of Education will be supporting the upcoming Tokelau Education Summit which will discuss pathways to further training and education.

The wharf was completed last November, while work on Nukunonu wharf is expected to be completed this year and Fakaofo wharf work will begin in 2020.

Fakaofo is the last stop on the nonstop trip around Tokelau, which is expected to wrap up on Wednesday before the delegation return to Samoa and back to New Zealand on Thursday. 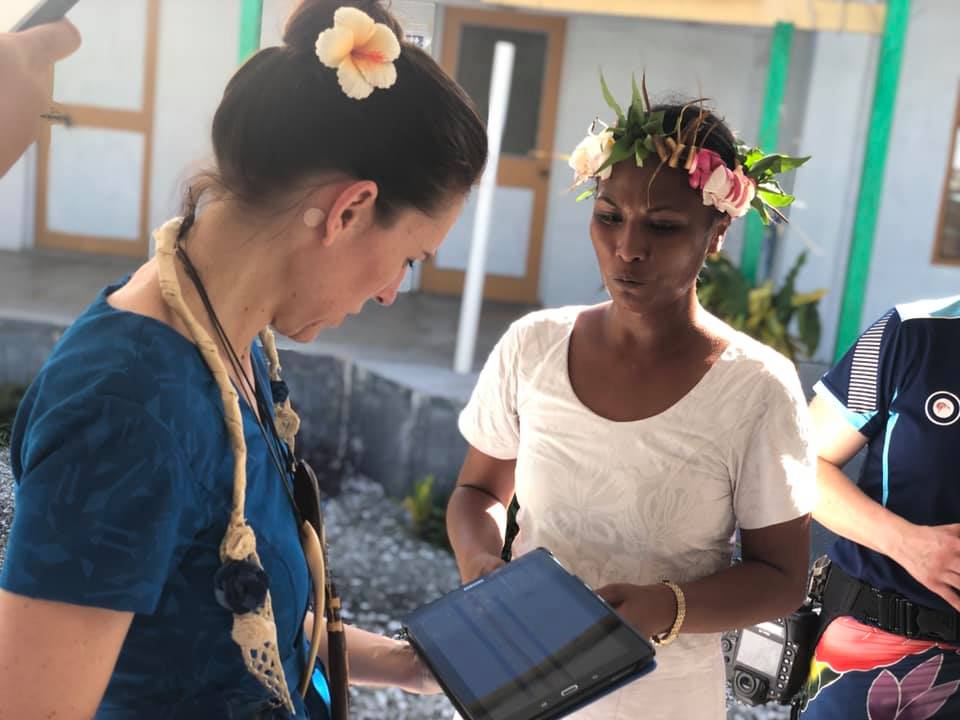 But at home the Leader of the Opposition in New Zealand, Simon Bridges, has come out publicly against Ms. Ardern’s trip to Tokelau while the nation is embroiled in a land dispute over property at Ihumātao, in Auckland.

While Acting Prime Minister Kelvin Davis said the trip was a longstanding obligation, made when Ms. Ardern first took office, Mr. Bridges said she should not have gone during a sitting of parliament.

“"I'm not saying ‘no ifs no buts’ people shouldn't be going to Tokelau or the Chathams or other Pacific Islands," the leader of the National Party, Mr. Bridges said.

“Of course there's a role for that, but right now, when she's just had a three-week recess, when she's got so many issues at home that everyday New Zealanders are focused on?

“We're just not seeing the focus from a part-time Prime Minister and Government,” the opposition leader said, on his way into caucus.

“Regardless of what's happening domestically or locally we have a great team that pick up the reigns when offshore,” Ms. Ardern responded.

Before leaving for Tokelau, Ms. Ardern told media that no decision would be made on the lands while the dispute, including large scale action by local iwi and supporters, is ongoing.

Tāmaki Makaurau MP Peeni Henare and Employment Minister Willie Jackson travelled to the site on Saturday to meet with the local iwi (mana whenua) and Fletcher Building, who bought the site under scrutiny in November 2016 in order to build 480 houses.

The Prime Minister, who departed Apia on Sunday, is expected to return home on Thursday.