Wife and Husband take on the Lalomanu ironman

The writing/running duo Lani Wendt-Young and Darren Young took on the tough conditions of Lalomanu on Saturday, with Wendt-Young facing her once crippling fear of the sea with her partner at her side.

Wendt-Young raced in the introductory Ironman race called the EN-Tri: a 500km swim, 12.5km bike ride and 3km run. But impressively, she only began learning to swim in April this year.

“I am proud of myself that I was able to do the swim.  I feel a sense of achievement,” she said.

When they reached the site after packing the car till one in the morning, and leaving for Lalomanu at 5am, husband and Pacific Games triathlete Darren Young decided the conditions were a little rough for a beginner.

He opted to run in the triathlon Beat the Heat team, and supported Wendt-Young on her bike and swim.

“It was good to see her actually participating,” said Young.

Young’s own 10km run was a challenge, just one week after coming eighth in the Pacific Games elite men’s triathlon, where he and the Samoan team (Sosefina So'o'aemalelagi and  Teofilo Molio'o) won a bronze in the team event.

“If I did a full event now I would have pushed it too much, especially with some of the overseas athletes that are here.

“I would have preferred if this was three weeks away from the Pacific Games games but I enjoyed it, I went out and I had fun.”

“To see them run and to see them in Samoa is eye opening,” he said.

“It is a once in a lifetime to experience it, to be next to these people.” 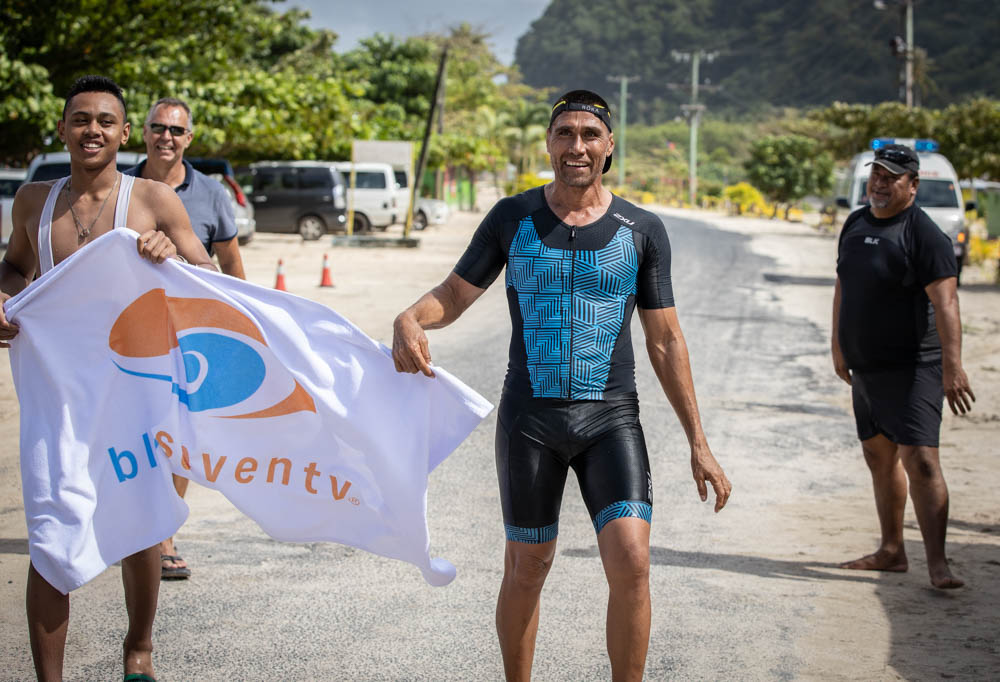 For Wendt-Young, she had to overcome her fear of the sea while she learned how to swim. She said her fears became stronger while researching for her book Pacific Tsunami Galu Afi, about the 2009 tsunami that devastated Samoa, American Samoa, Tonga, as well as other parts of the region.

“It’s quite significant that this event is here, because the main reason why I am scared of the water is because of the tsunami,” she shared.

“As we were coming out here I thought, this is going full circle. This will be interesting… and to bike past places where I had interviewed different families, it brought a lot of memories back.”

She put her head under water for the very first time in April in Hotel Amanaki’s pool, and reported it gave her the shakes. Eventually she graduated to open water at Taumeasina, and says even now she will think about drowning if she swims out of her depth.

“The sea is not my friend,” Wendt-Young said, laughing that the story of Moana is not about her.

“When I am in the sea she tells me she wants to kill me.”

Wendt-Young said she was inspired to attempt a triathalon after meeting Iron Māori participants while supporting her husband at the Ironman race in Taupo in March.

The Iron Māori is a community centric event trying to encourage “regular folks” to give triathlon a go. They made it look achievable, the author said.

“It’s very inspiring to see the iron men doing their thing but they are super sporty. It is very hard to envision yourself doing what they do,” she said.

She has registered to complete her first ever quarter Iron Māori race in November which is a 1km swim 45km cycle and a 10.5km run or walk, the first step towards completing a half Iron.

“If I don’t die I will eventually do the half and then a full Iron,” she said.