For the first time in a long time, TVNZ broadcaster and journalist John Campbell became shy.

A larger-than-life public figure who has spent his career facing a camera or a microphone became suddenly overwhelmed when the Head of State, His Highness Tuimalealiifano Vaaletoa Sualauvi II, conferred upon him the title of Toleafoa on Wednesday morning.

“It came completely out of the blue,” Toleafoa said.

He was in the Head of State’s residence, covering a meeting between Manu Samoa and His Highness when he was invited to sit next to Tuimalealiifano.

And, before he knew it, he was being bestowed with a title from Tuimalealiifano’s own family lineage.

“Then, suddenly, I was there as my real self, having this quite unexpected thing happen to me with the team, about whom I am here to report, kind of looking on.

“I found myself feeling unexpectedly shy, and shyness is not something I suffer from terribly often. I was a bit overwhelmed.”

He suspects the Manu players and management may have known before him, because of some “giggling and shuffling” immediately before he was invited to sit with Tuimalealiifano. 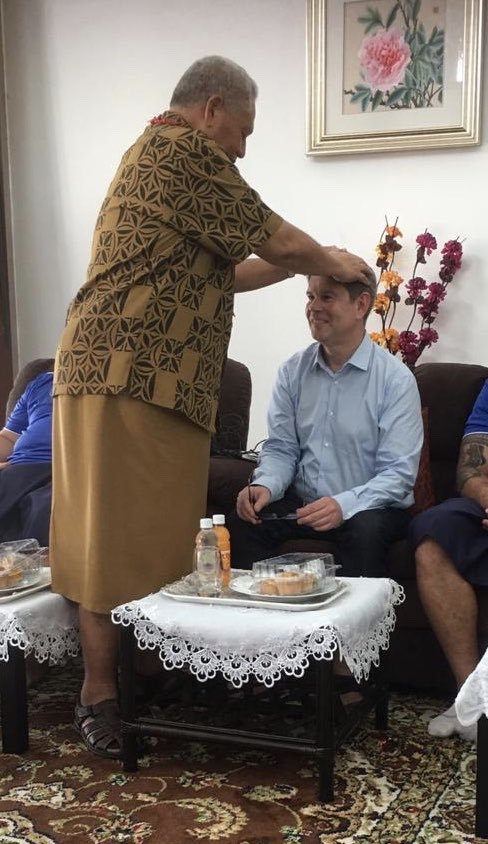 Under normal circumstances Toleafoa thinks journalists should be separate to the establishment or leadership in order to better hold them to account. But, in this case, he simply feels proud.

“It was just an incredibly kind thing to do,” he said.

Before he leaves Samoa on Sunday, he intends to have a “proper history lesson” to learn more about his new title and its responsibilities. But, in the meantime, he was told it is from the Head of State’s family.

Having this title may inspire more reporting in Samoa and in the South Pacific more broadly, Toleafoa said. On that score, apart from his previous coverage on the tsunamis and rugby, there is more work to be done.

“I think the really important story to be told in the South Pacific is climate change,” said Toleafoa.

“And, because of the communities in the South Pacific having such strong connections with New Zealand, we have to start considering that there will be climate change refugees in the not too distant future, from our neighbourhood. How are we going to respond to that?”

Toleafoa is in Samoa to spend time with Manu Samoa and to report on the gap between Tier 1 and Tier 2 rugby nations in the lead-up to the Rugby World Cup in Japan later this year.

He previously led a successful campaign to have the All Blacks travel to play Manu Samoa on home soil for the first time in an historic 2015 test match.