Samoa was represented on the refereeing field four times over in the 16th Pacific Games touch tournament this week by four referees working their way up the qualification ladder.

Asiata Gerard Ananpu, Tua Toomata, Frank Ah Kuoi and Toaete Tanuvasa are working with New Zealand based Ioane Mita to develop as referees, and grow the game of touch here on island.

Before Mr Mita and Samoa Touch began developing a program to train and certify referees, Asiata was the only qualified ref, and it was not enough each competition.

Mr Mita is the associate director of referees and was on the tournament panel of the Pacific Games competition. He said having four Samoan refs on the field is a great achievement. 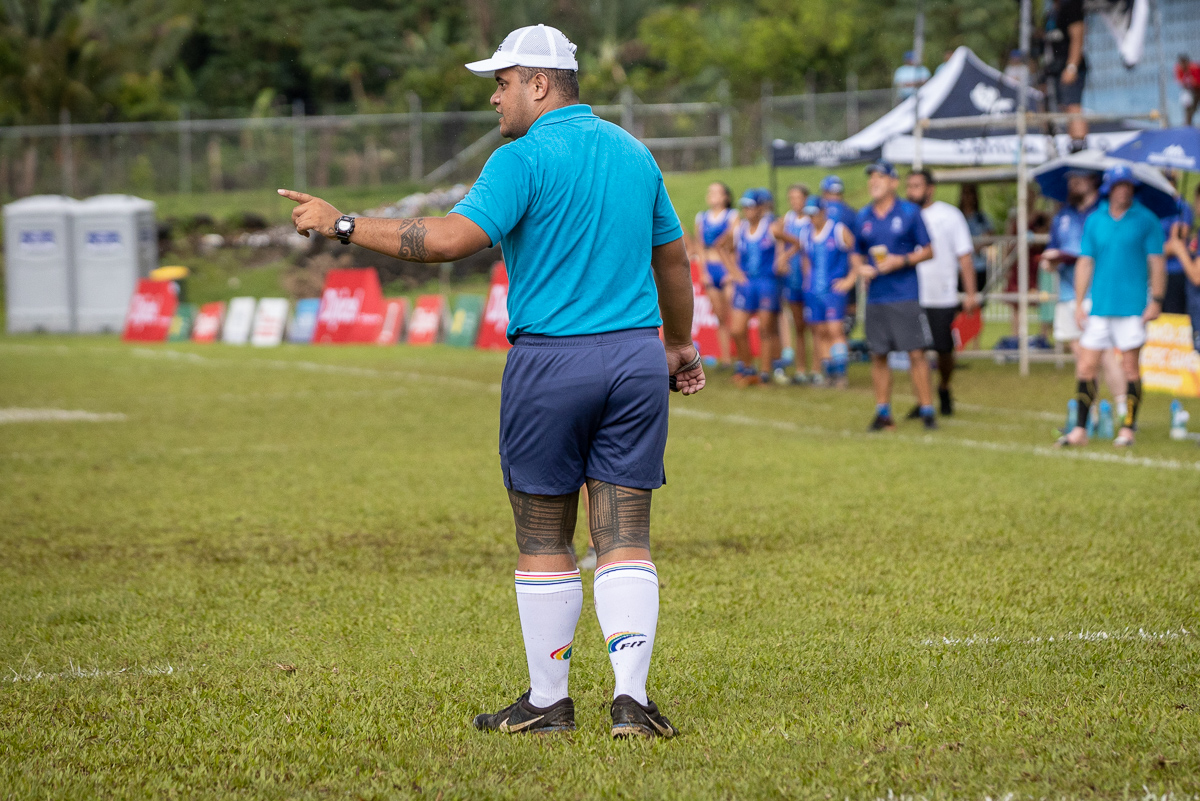 As well as the local four, there are 10 New Zealanders, one Australian, two Niueans and two Solomon Islanders in the referee team, which is more Pacific Island representation than normal, Mr Mita said.

Samoa Touch has a five-year development plan in place that includes getting the group from level one to level four in their qualifications badge structure. Currently they are all level one and Asiata is a level two.

The educational training has been designed especially for Samoa, based on the New Zealand model.

Refereeing is an opportunity to represent Samoa on an elite level for people who may not have had a chance to as a player. 13 Samoans overall have achieved a badge one.

But the work is unpaid and getting qualified then using that qualification in the World Cup and beyond is all out of the referee’s own pockets.

“There is no money involved in this whatsoever, absolutely not.

“It’s the same all around the world, a lot of referees have to find the money to get to the World Cup and it’s going to be the same with us,” he said.

“In the end it’s about pride, it’s about achieving goals, it’s about the prestige of going to an international event and ultimately they become the next leaders here.”

The referees and the organisers in New Zealand will have to fundraise to get the men to New Zealand and Australia where they have committed to refereeing competitions there to get on field practice and be assessed for their badges.

Mr Mita does not believe Samoa, or Samoa Touch will be able to afford to help pay for their training or even to help them or the playing team to the next world cup, so fundraising is the only way to go.

For Asiata, developing as a referee is a great way to spend his out of work hours.

The sport brings him an opportunity to meet new people, get outside, socialise and have a life outside of work, he said. Not only that, the travel opportunities have been great.

He learned to referee as a university student in Melbourne because it was a paid job, but he ended up loving the gig. He trained up to level three in Australian modules and when he moved home to Samoa he started refereeing with Samoa Touch.

“What I found out was that there is no badging system in Samoa, as with other countries in New Zealand and Australia where there is a framework in place,” Asiata said.

“So that is what we did here.”

Mr Mita came to help run a Marist Touch tournament in 2017, and the process began there. Asiata said better referees result in better results from the teams, which is why he is so passionate to develop, he said.

“New Zealand and Australia are number one, number two in the world, and that is because they have got a contingent of referees who are well qualified and well prepared.”

He is not put out by the expense, although the travel to New Zealand and Australia for development and refereeing opportunities have put a strain on his employment.

Sometimes he gets told by his bosses he spends too much time on touch.

“I don’t mind not getting paid, I am just happy to lift the referees and officials in this sport in Samoa,” he said.

“We want to build the badging system to be recognised by Federation of International Touch, and that is why we wanted to get our boys involved, so they can see we have a framework and they can see our boys are up to the standard referees should be at.”

The Salelologa town area in Savai'i was deserted as the residents stayed home as part of a two-day lockdown with health officials administering the AstraZeneca vaccine to Samoa's eligible population.

Close to 1,000 get vaccinated: villager

Close to 1,000 village residents of Saoluafata received the AstraZeneca COVID-19 vaccine over the two-day lockdown on Thursday and Friday.