Samoa won another silver and a bronze meal at the Pacific Games squash on Friday.

In the mixed doubles category, Lupe Kapisi and Ivan Chewlit won bronze, with New Caledonia winning both silver and gold.

Speaking after the game, Kapisi, who already has medals from last week, said the game could have gone either way.

“It’s a lesson to be learned for us to come back harder and stronger and we hope to represent Samoa again in the future,” she said.

Manu said that they are both relieved everything is done but so gutted to have lost out on the gold.

“It is because we wanted to win that gold for our families and country but tomorrow is another day and the sun will keep on shining.

“We thank our coach Paul Wright and assistant coach Nigel, families and friends for their support while we trained and we dedicate our success for them because without their support we would not have made it through,” she said.

Chewlit also felt a bit of mixed emotions from being proud of his achievement to disappointment of not winning gold.

“But it’s not easy at my age," the 39-year-old said. "A difficulty is fitness - we were playing against players with ages around 21 and those guys recover quickly but that is not an excuse."

The father of two from Vailima acknowledged God for gifting him with the talent to play squash and returning all glory back to Him. 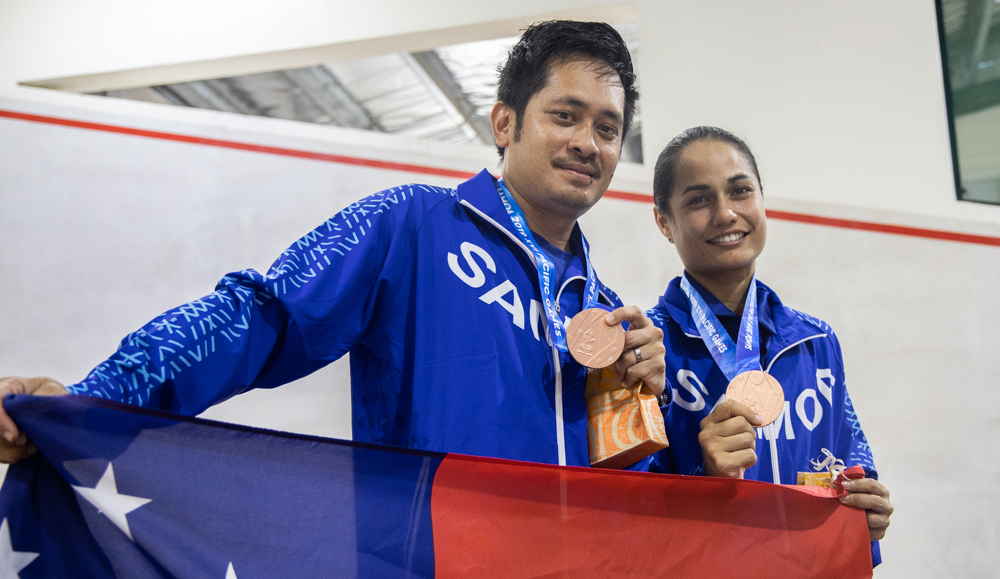 “I also want to thank my wife and children especially my wife who had to juggle so much like running our business by herself while I had to sacrifice my time to compete and train so I really appreciate her for that.

“Squash is a family sport where we get together like a family and play. It’s a great workout fitness wise. I really want to encourage the young generation to come play so we can have representatives in the future for squash.”