Unity, respect and excellence are three key words that bind and drive the melting pot of the Pacific, New Caledonia, at every Pacific Games.

The French territory has dominated 12 out of the 15 Pacific Games since its inception in 1963, and they are on their way to claiming the XVI Pacific Games. Fiji won the first Pacific Games hosted in their country, with Papua New Guinea claiming the 1991 and 2015 Games, which they also hosted.

As of yesterday, the French territory has bagged 67 gold medals, setting the bar too high for Australia, who’s on second place with 32 gold medals and Samoa on third with 29 gold medals.

In an interview with the Samoa Observer, New Caledonia’s P.G.A Secretary General, Christophe Dabin, said there is no secret behind the success of the team.

“We want to dominate all the sports,” said New Caledonia powerlifter, Luc Duval, who was also part of the interview.

“The three key words that drive the team are unity, respect and excellence. These three words lead our team.

Luc said it’s important for the team to have unity.

“And unity is always good for victory. Respect is very important for New Caledonia because when I come, I can respect the hospitality of the Samoans, technical officials, etc.”

New Caledonia brought 327 athletes from the different ethnic groups to represent their country in the region’s biggest sporting event.

“We have some athletes who enter international level, so they can train in France for competition and represent France. Others stay in New Caledonia and take part in the Pacific Games and Oceania Games,” Luc said. 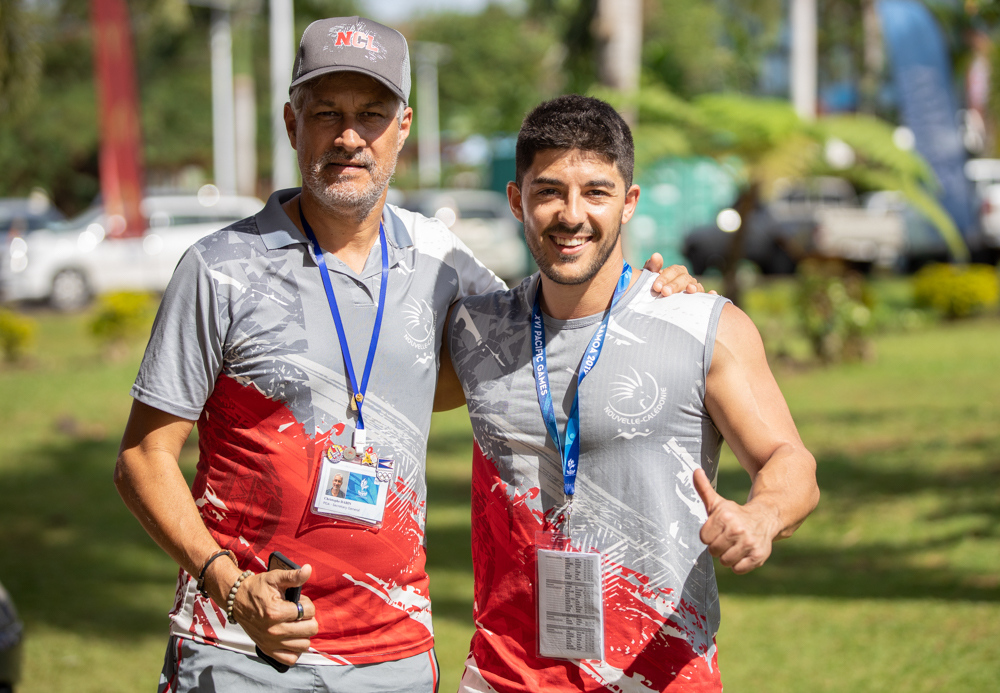 For New Caledonians, the desire to win is engrained in their culture from a young age, which also fuels their success.

“We have some athletes who start late, like me I started a year ago, but we have a big progression when we have good coaches, good diet and good mind and spirit,” said Luc.

Christophe said the Pacific Games is the most important and biggest competition for them as all the countries in the South Pacific are represented.

“New Caledonia does not participate in the Olympic Games, but the Pacific Games is the only competition when New Caledonia can represent all its ethnic groups as one country, two flags, but one country, one mind, one unity.

“It’s important for us to be there but for the Olympic Games, we represent France.”

Luc said they don’t have state-of-the-art equipment and don’t receive funding from France.

“All our equipment belong to us, we don’t have aid from France. The equipment we have is enough for us, we can train in a dirty gym with old equipment, but in our mind it’s good because when we want to perform in the Pacific Games it’s important for us to show that we can achieve with old equipment.”

Asked about what makes their Pacific Games experience this year different from any other, they both agreed it was Samoa’s exceptional organisation of the event.

“This Pacific Games is important for us to win, but in the minds of the athletes, Samoa has already won through the organisation of the event, given the short time Samoa prepared for the Games. And it has been a well-organised event,” said Luc.

They said New Caledonia hopes to pull another 12 gold medals by the end of the week.

Taula Mana has demolished Taula Legends U20 in a one-sided affair at the Apia Park Stadium on Saturday, running out 57–10 victors in the Taula All Star Tournament.