Samoa's tennis team continues to fight for a chance to win medals at the XVI Pacific Games despite injuries and illness affecting some of its players.

On Wednesday, Steffi Carruthers won against Saoirse Breen of Fiji 6-0, 6-0 in the singles category which enabled her to go into the semi-finals.

In the men’s doubles Samoa’s Leon and Marvin Soonalole won against Jean-Victor De Gaillande and Icham Tidjine from New Caledonia 6-2, 6-2-1.

Speaking to the Samoa Observer, coach for Samoa men and women’s teams, June Langton, applauded the effort and hard work put in by her team despite the difficulties and challenges faced.

“It is very hard for our players to hold on, despite having to play back-to-back matches in one day, but we all have so much faith in them.

“Another challenge the players are facing is the spread of various diseases like the flu going around. Carruthers was a bit unwell, she had a fever this morning but she still had to play back to back matches in the women’s singles, ladies doubles, and mixed doubles.

“So far, the majority of our players are injury free except for Schuster who hurt her shoulder so we had to keep her out of the singles so she can concentrate on the doubles and mixed doubles,” she said. 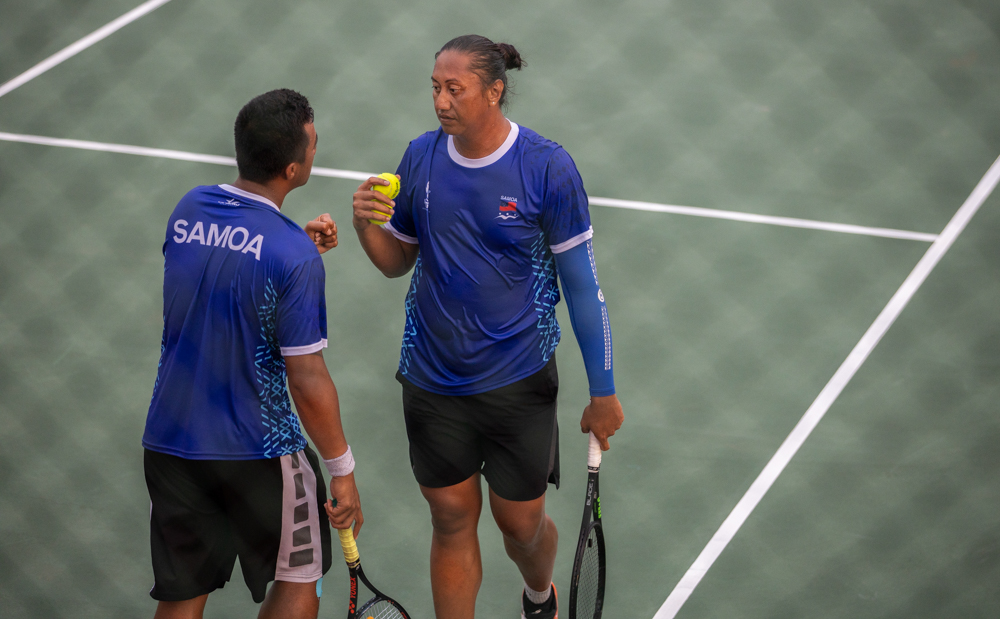 She said her team are very determined and still fighting even though everyone is tired and exhausted, but there is so much passion in their fight for a place in the medal playoffs.

“Unfortunately Steffi is on the same side as Abigail Tere-Apisah in the draw ,but she did beat Abigail before in the team events through the singles, and hopefully she will beat her again but we are very confident that she can do it.

Carruthers will play against Abigail Tere-Apisah in the women's singles on Thursday at 9:00 am, whereas at 12:00pm in the afternoon Carruthers will also play in the women's doubles with Eleanor Schuster against Papua New Guinea's Patricia and Marcia Apisah followed by the men's double's representing Samoa is Marvin and Leon Soonalole will play against Tonga at the tennis courts at Apia Park.