Sean Rasmussen, carefully peeling away the plastic coating on the cauldron after it is installed at Apia Park. (Photo: Michael Rasmussen)

Five weeks before the Pacific Games began, Michael Rasmussen, got a once in a lifetime call.
But it wasn’t until a week later he realised exactly how once it a lifetime it was.

Just over a month out from the XVI Pacific Games, Samoa still had not found someone to create the cauldron that would light the Games into being.

A designer in the Marketing Team had created something so beautiful, no one was brave enough to build it. Even Mr. Rasmussen, when he got the call asking him to take it on, said no.

“I said to them look, in all honesty, we have so much work on at the moment, and we don’t want to disappoint our clients that give us water and bread, so I honestly said no at that point," he told the Samoa Observer.

“But they emailed me the picture anyways.”

He chatted it over with his uncle, Henry Rasmussen, over from New Zealand. That conversation shook sense into him, he said, and he called the Pacific Games office back immediately.

“It’s one of those once in a lifetime opportunities you cannot say no too,” he said.

So despite their workload, the short timeframe and the lack of supplies, Mr. Rasmussen went out to see what resources could be found on island. 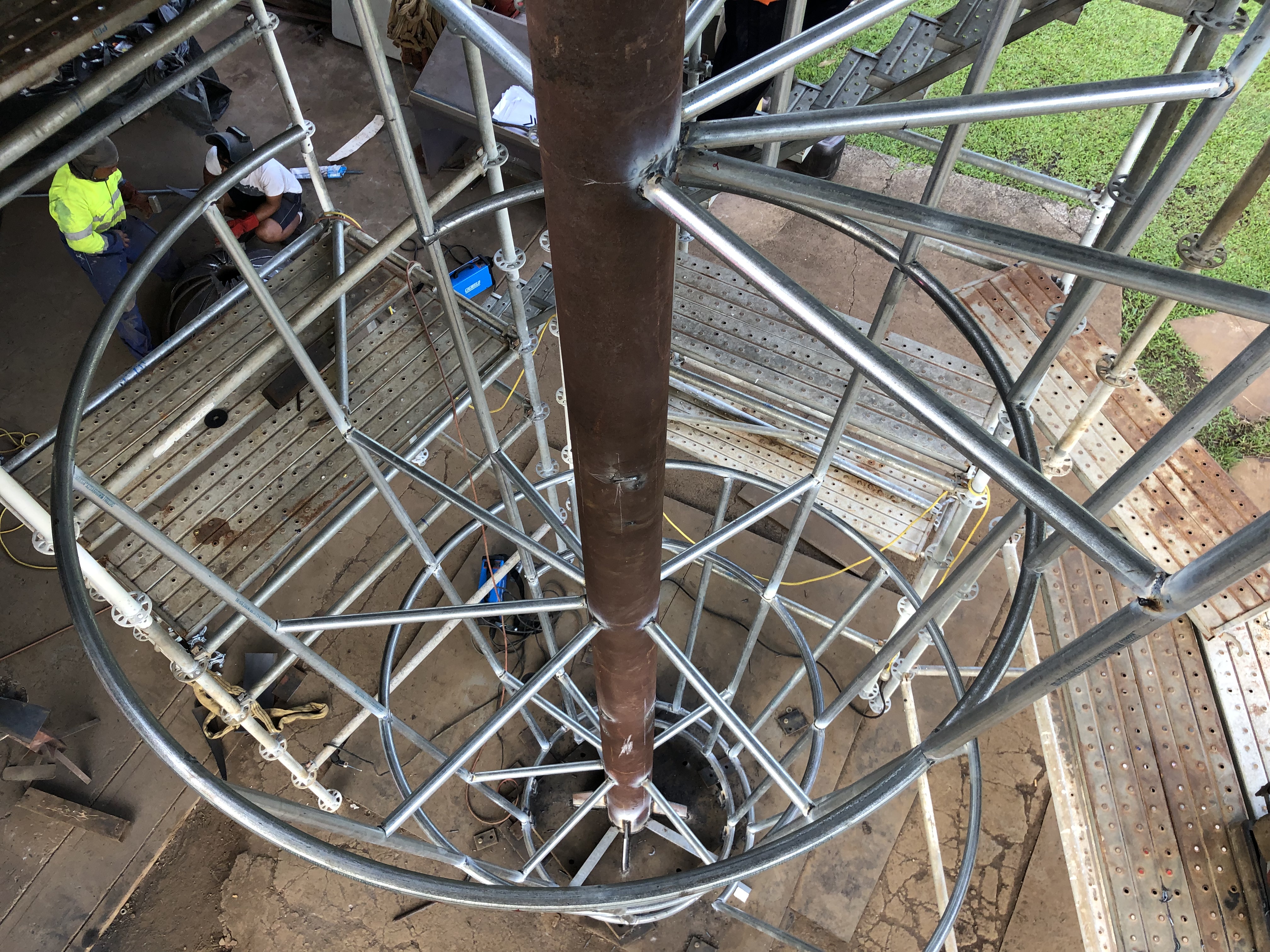 He said there were several sleepless nights, trying to wrap his head around how to build something as non-straightforward as the design he had been given.

It was nothing like any fabrication project his team had taken on before.

“It was a designer’s dream and a builder’s nightmare,” he said.

“I said look, I am putting a proposal through, are you interested? It was a yes. He spoke to his wife, and five minutes later he said we’re on.”

They sent in a proposal with four weeks to go before the Games, got a verbal okay and Mr. Rasmussen flew to Samoa.

Finally, construction began on Thursday the 20th of June, with 17 days to go. 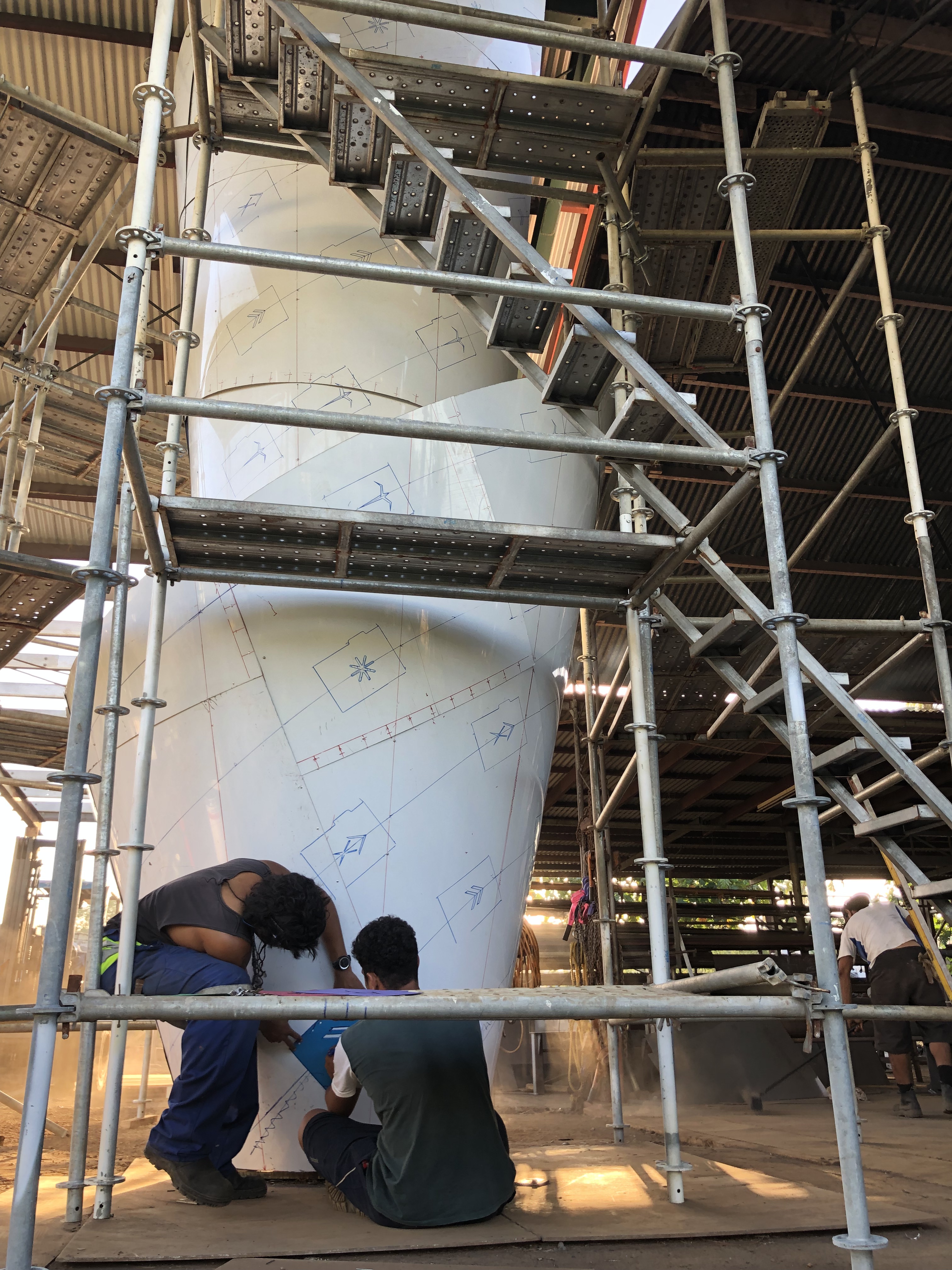 The cauldron itself is seven metres high, which barely fit under the roof of the Rasmussen Engineering workshop.

It is a metal skeleton which coils around like staircase, with a metal cone around it meeting a tanoa from where the flame burns. That coiling structure was a complicated and completely new exercise, Mr Rasmussen said.

“It was a challenge, with no room for error. I said to Sean, there are going to be two million eyes watching that thing on Sunday. Then the Pacific Games chief executive officer [Falefata] Hele came one day and said there will be four million eyes on it, apparently,” he said, laughing.

For the outside, the team used stainless steel sheets, which they had coated in plastic sheets to stencil on the mamanu design. They cut that out to create gaps from which a floodlight could shine through, illuminating the tatau brilliantly.

The trickiest part was positioning the mamanu around the steel skeleton inside, so that the bars would not block the patterns from being illuminated.

“It was a real balancing act, and we only had one shot at it. We made the decision to put the mamanu in between and avoid these horizontal pieces.” 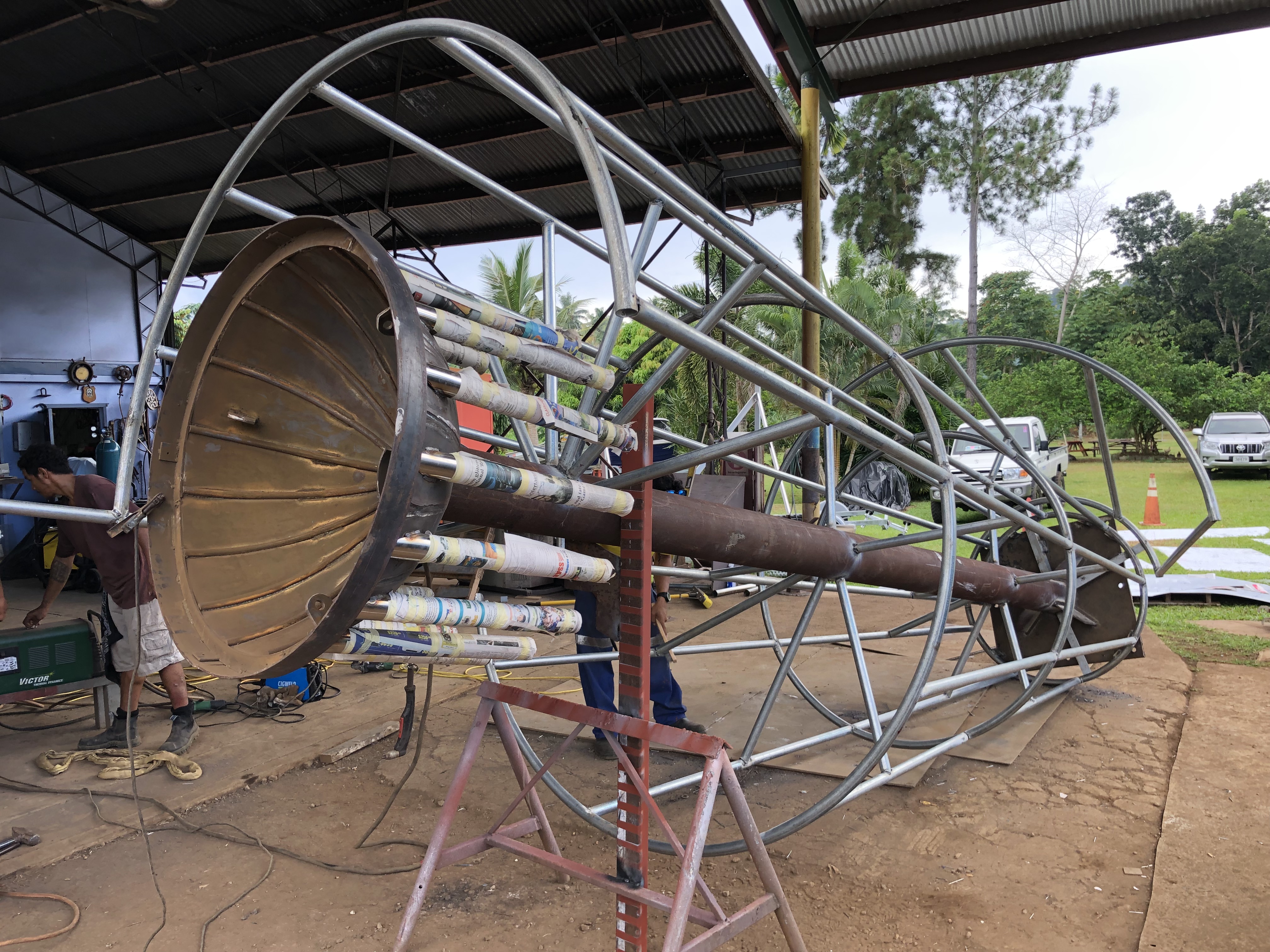 The cousins took a Sunday break to go fishing, and on Monday the 1st, with less than a week to go, the team loaded the cauldron skeleton onto a trailer and drove it to Apia Park. They carefully installed it on the foundation they prepared, and set about putting up the metal sheets.

Also involved in the project was the large steel tanoa which the team built from scratch. And during the project, it was discovered that someone at Origin Energy kept the burner that lit the cauldron of the 2007 Pacific Games, which they happily installed in this year’s cauldron.

Mr. Rasmussen said when the last plastic sheets were removed, the metal was polished and the scaffolding removed, it was a thrill to see their work in its rightful place.

“The thing we were excited about is that we would never see the full reveal until the last day,” he said.

The family had already bought tickets for the big night. After the installation was complete, they went to test their seats out, only to find their creation was immediately behind a large pillar.

“I went back to the ladies as asked to change my seats. She said, no, we’ve been told not to. 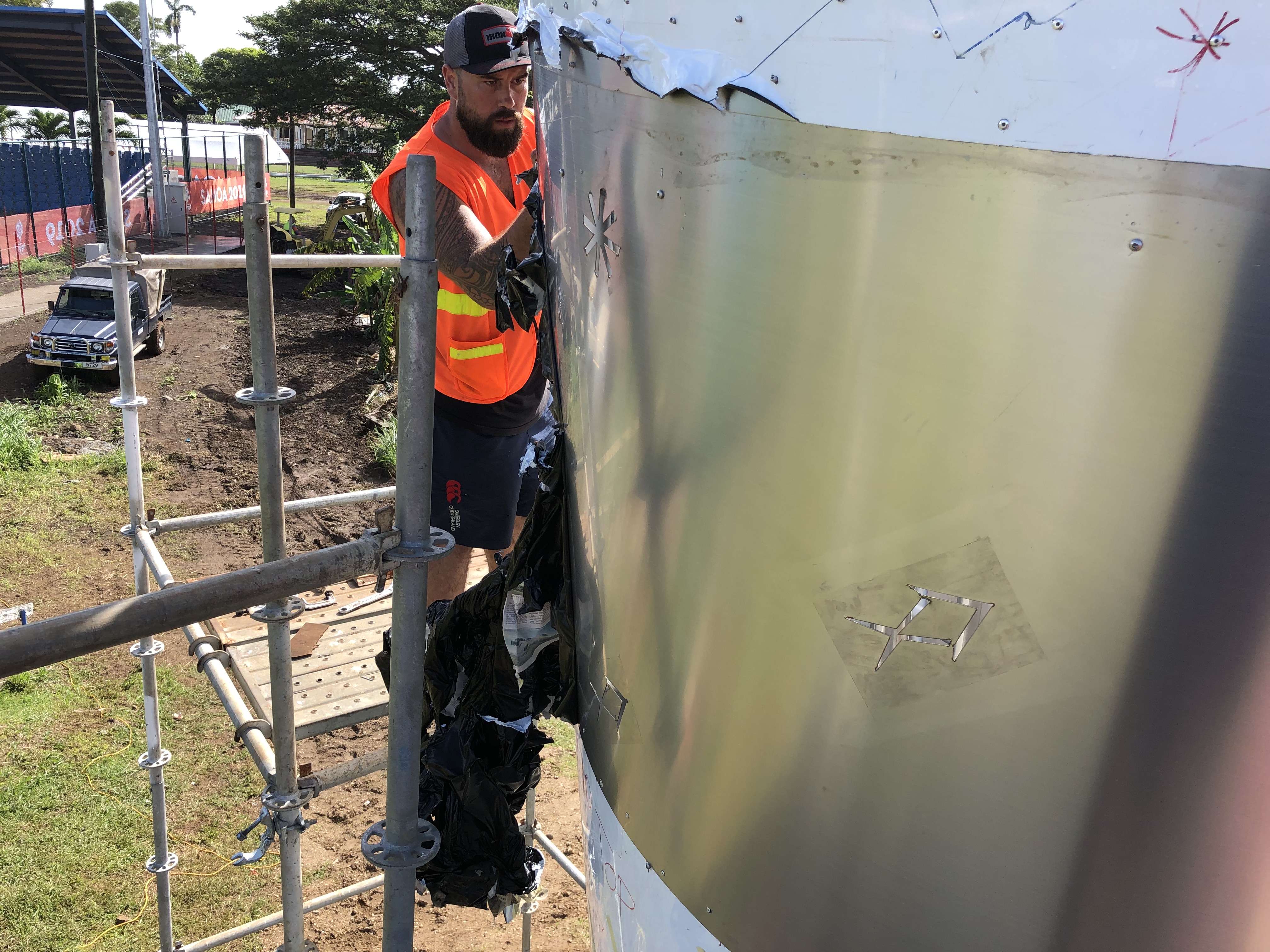 The big night came and went, and it was emotional for the cousins and their team.

“It was such a surreal moment to be among your family, friends, and then watching people take photos in front of it afterwards,” said Mr Rasmussen.

According to Mr Rasmussen, the Government of Samoa are discussing how best to keep the cauldron a part of Samoan life. They are entertaining moving it to the new waterfront development site in front of the government building, for example.

But in the short time frame they had to build the cauldron, Rasmussen Engineering had to make some choices. One of those was to use domestic grade stainless steel, rather than marine grade. So eventually, if left outside, the cauldron will stain and look rusty.

Getting it up to outdoor standard can be done, Mr Rasmussen said, but it will be costly. It will also need to be cleverly installed to avoid children climbing on it, or cutting themselves on the sharp cuts of the mamanu.

“It would be so cool though,” he said.

“If it’s at Apia Park people will hardly see it but if it’s down town it would be awesome because people would see it. They wouldn’t be able to light it but they should put floodlights inside it.” 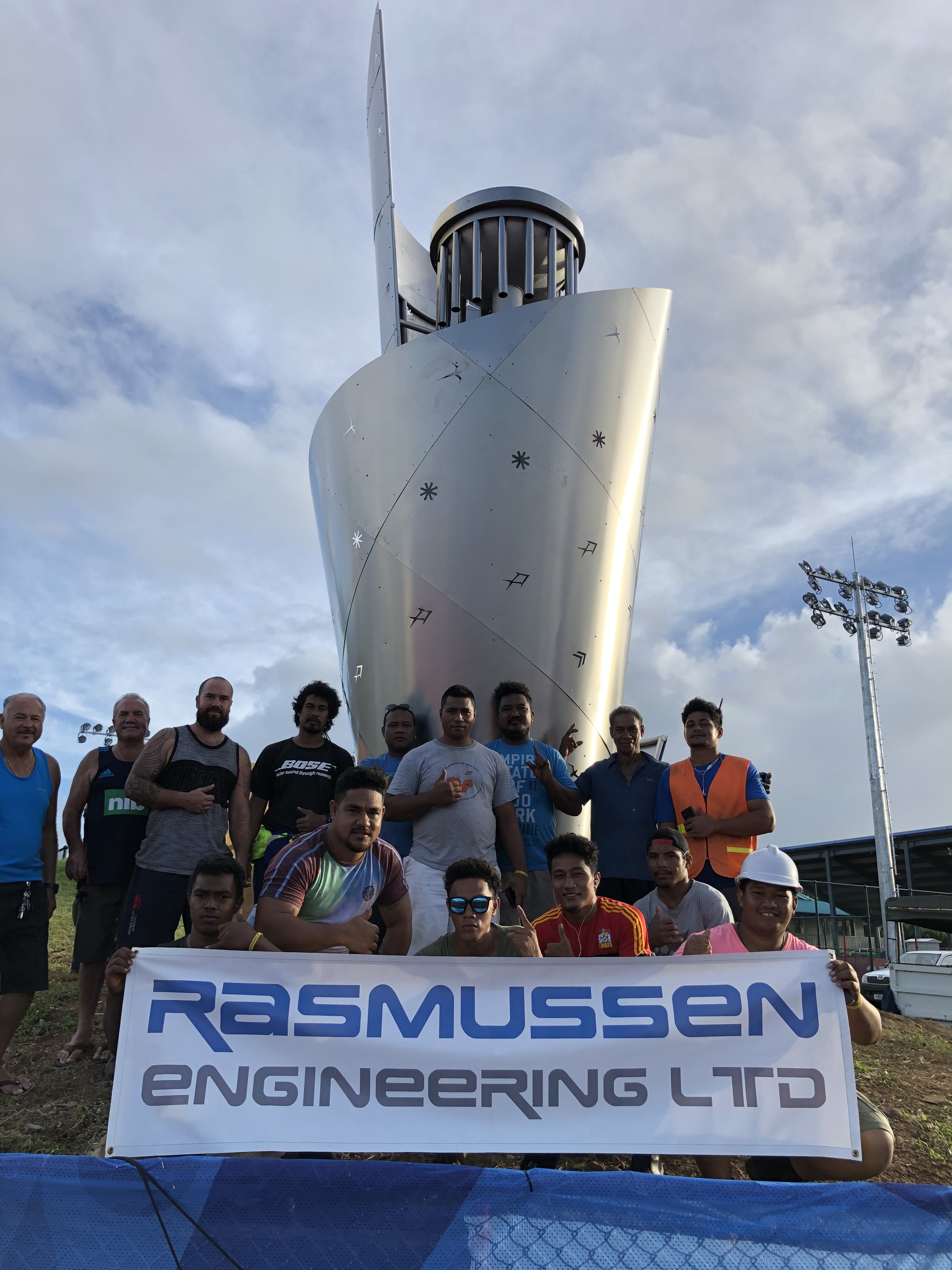 Back home in New Zealand, Sean Rasmussen is getting to work creating small 3D replicas of the cauldron in the workshops at Massey University where he is a technical services manager.

Among the joy of building the cauldron, and the pride and excitement flowing on their Facebook page photos of their creation, Mr Rasmussen wanted to also correct some facts.

He had seen suggestions online that someone walked out on the contract to build the cauldron, leaving Rasmussen Engineering just ten days to build it, but Mr Rasmussen said that is not true.

“[The Pacific Games Office] did sort of leave it to the last minute, because someone had designed it and it was such a cool design that no one wanted to take it on, because it was so complicated,” he said. 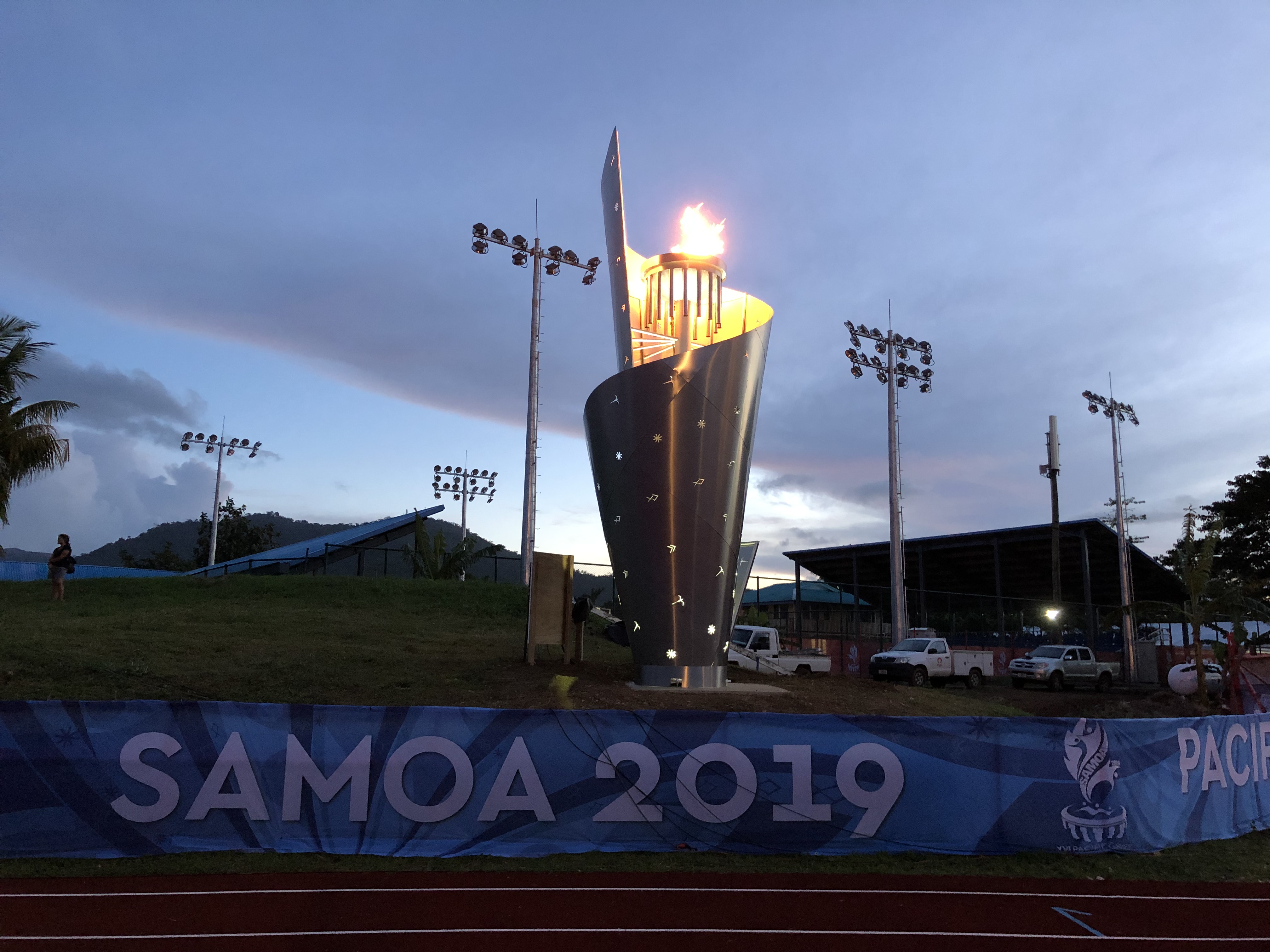 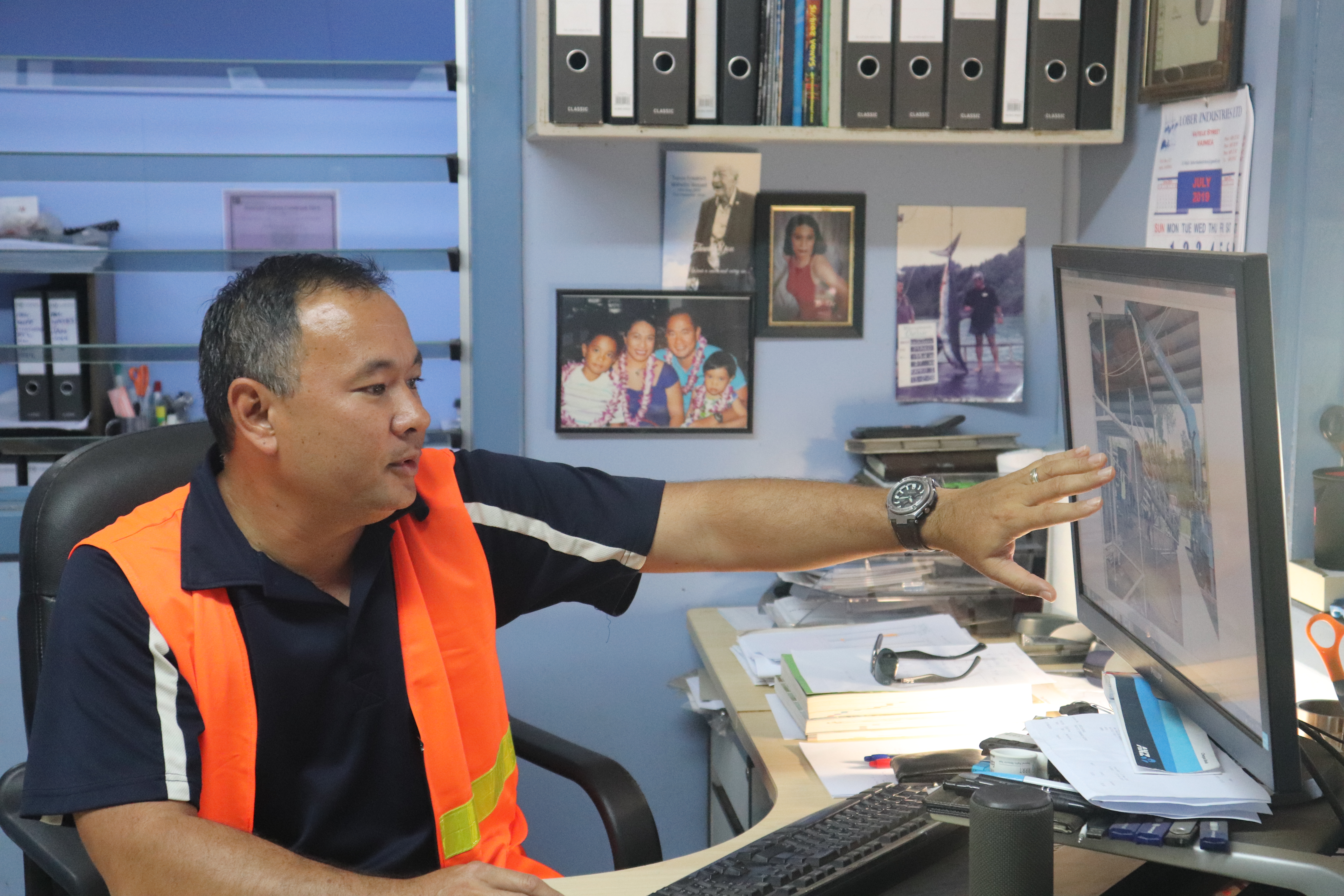