Even with an injured left foot, Adeline Williams, of New Caledonia is still determined to do her best and make her country proud.

Adeline settled for bronze in the 200 meters backstroke, swimming with a fractured foot on Tuesday night, but is up for her favourite stroke on Thursday night with hopes for gold.

“I don’t think I can get gold, maybe silver if my foot was ok. I think I did pretty well with my situation. I am hoping to do better in all other races, but am happy with the outcome of the 200 meters race,” she told the Samoa Observer.

“I was lucky enough that they authorised for me to tape my foot, so I couldn’t push off the wall a bit. It was hard to do the breaststroke a bit, so yes it was pretty hard. 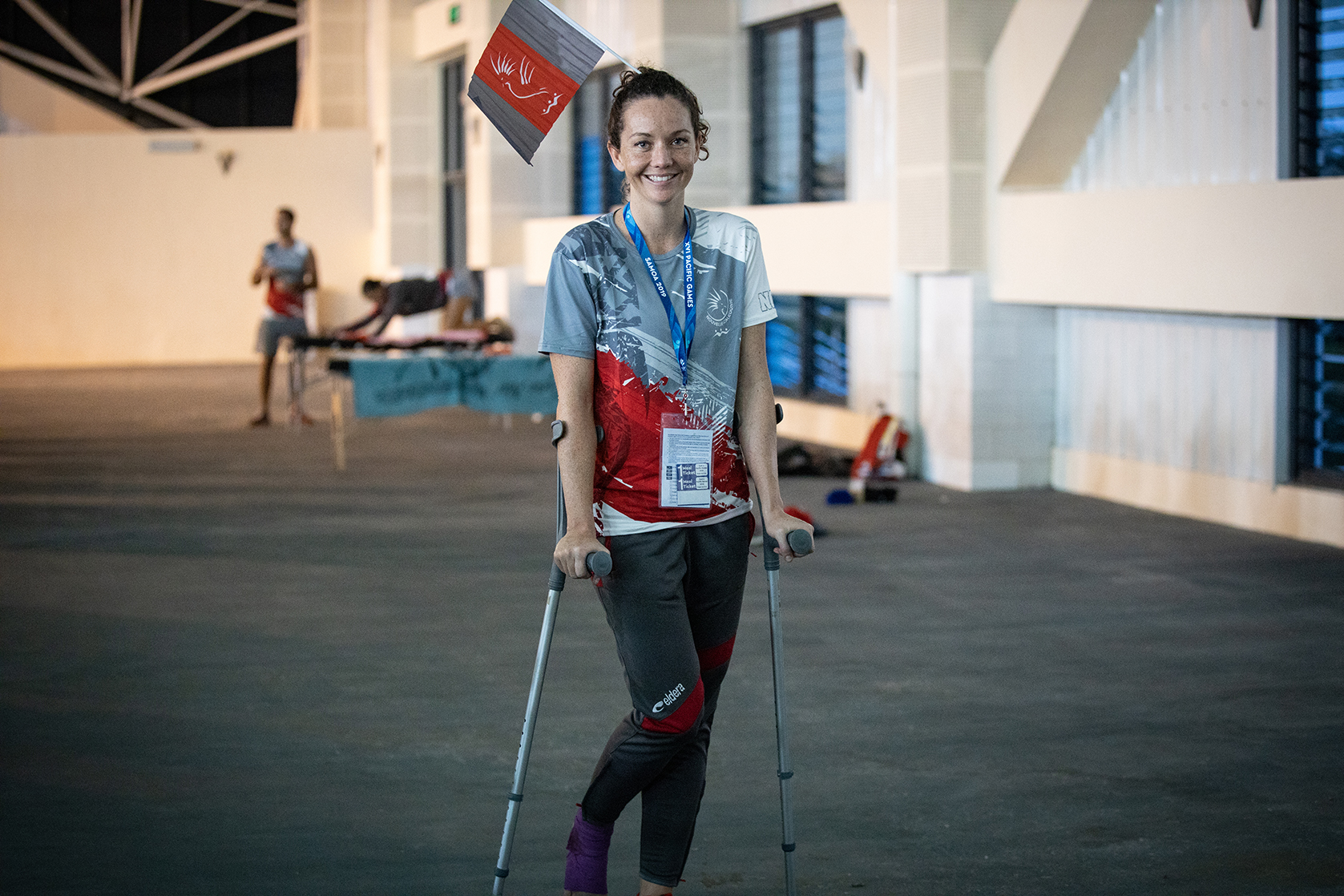 The 29-year-old is the current record holder of the women’s 200 meters breaststroke with a time of 32.5 she set in the 2015 Pacific Games in Papua New Guinea.

It’s her fourth Pacific Games and probably her last as she’s been swimming for about 20 years, she said.

Adeline is swimming the 50 meters breaststroke Thursday night but is unsure if she will break her record.

“I stopped swimming two years ago and I just started swimming five months ago so I am not the same as I was before to break that record.

“I am hoping for a gold in my race tonight (Thursday) as it is my stroke but it might get too completed because what’s really important in the 50 meter is start and I can’t push off because of my foot, so that might impact a lot, I really don’t know what the outcome is but I will do my best and no regrets.”

Adeline injured her foot when she slipped from the bunk bed at the Games Village in Faleula.

“I slipped from the bunk bed. My sheet was on the ladder when I was trying to go to the washroom and I slipped. So I fractured my foot. It affected my swimming.”

It’s not her first time in Samoa as she was here for the Pacific Games 12 years ago. 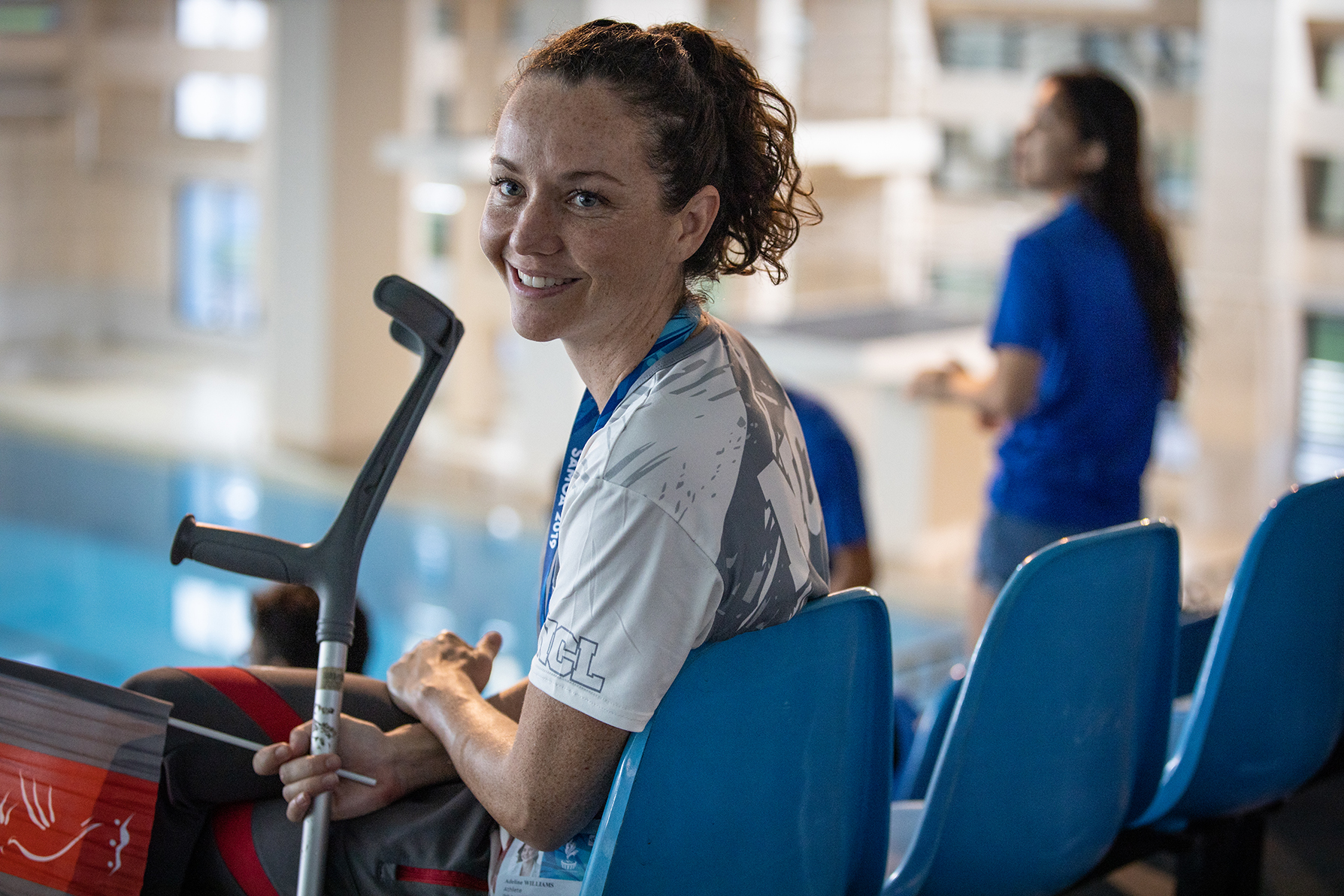 Asked why New Caledonians are good swimmers, she said it’s because of the good coaches and competitions they have in their country that motivate them.

“I think New Caledonians are very good swimming is because we have very good coaches who motivate us, and for me what motivated me when I was young was my team, my friends, it was a big family and we motivated ourselves to grow and swim faster,” Adeline said.

“I think we have a culture of swimming, I remember New Caledonias looking at athletes and saying I want to swim there. I feel really lucky.”

She said she feels lucky to compete with French team as most of them get the opportunity to study in France.

“When we go to France universities it’s not easy to study and swim, but I was lucky to join some clubs and do swimming at the same time.

“It also helps us to progress because over there they have such good trainings and clubs that support you and a lot of international participants, so that helps a lot to progress.”

“It’s like a family, you become more humble, and I think it’s a sport uses every muscle of your body, and it helps with your breathing. I am an asthmatic and it helped me so much. It’s such a special sport in terms of being in the water it’s just so magical.”

Asked what motivates her to keep swimming and competing, she said: “The feeling of being in the water, of being a big family with everyone, and the Pacific Games is a classic example, like you are united with your country but you also got friends with people from other countries and I think that’s just beautiful and that’s why I wanted to come back because the atmosphere for my country and to see my friends from other countries.

“Because for me the Pacific Islanders are the sweetest people in the world and so that’s what motivates me. Every time I go, travel the world, I always say yeah Olympics might be fun, but Pacific Games are friendlier, more united.”